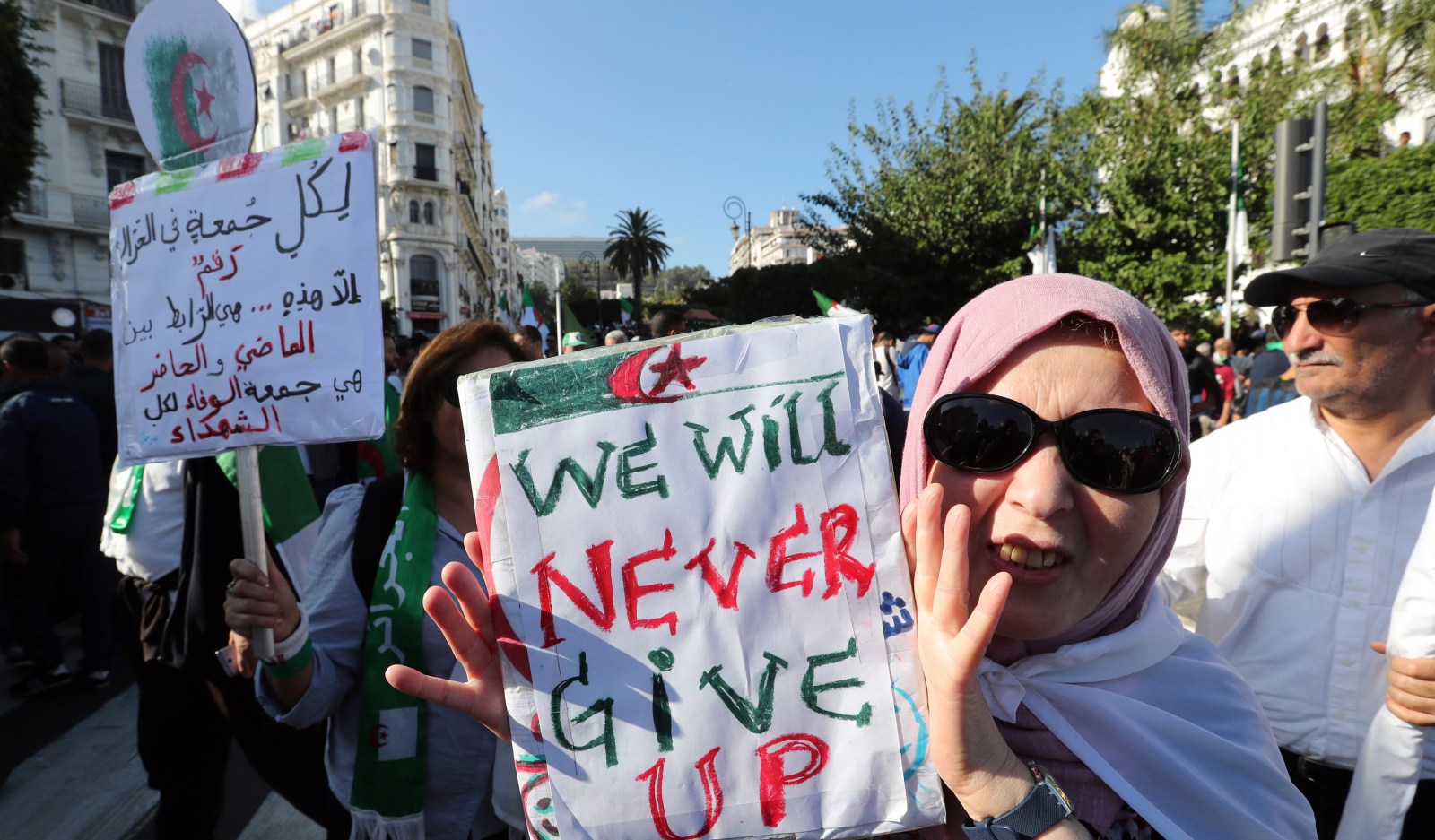 An Algerian woman holds a placard as she joins a protest in the streets of Algiers, Algeria, 01 November 2019. Algerian protesters took to the streets as part of weekly Friday protests calling for radical change of the system. The protests coincide with official celebrations of the Algerian War anniversary that resulted in the independence from France. EPA-EFE/MOHAMED MESSARA

Citizens are using unorthodox ways to ensure that their voices are being heard. By Sammie Wicks, Anthony Riddle and Stellah Kwasi for ISS TODAY

There is a wave of protests happening globally across the regime spectrum – from democratic to anocratic and autocratic societies. Although the issues vary from region to region, it is clear that citizens are demanding to be heard and they are using unorthodox ways to organise and protest.

In Algeria, considered an anocratic state, protests have persisted since February 2019. Spurred by widespread peaceful and unrelenting protests in Algiers, then president Abdelaziz Bouteflika was forced to resign immediately in April, followed by a purge of his elitist cronies. While the demonstrations have received sustained international media coverage, there’s been a lack of significant commentary or support from European or North American governments.

In the 10th month of continued organised and popular demonstrations, the Algerian Hirak Movement continues to be mostly non-violent. The lack of violence is the result of several historical factors, regional events, and tactical decisions made by organisers and protesters. The legacy of the Algerian civil war, commonly referred to as the “black decade” from December 1991 to February 2002, which recorded over 150,000 deaths, seems to have helped in the peaceful nature of the protests and the state’s response. Algerians understand the cost of war and civil strife.

Although some argue that the political discord may create space for violent extremist groups, Algeria has not had significant attacks in the country. The legacy of the black decade has both fostered disillusionment with militant Islamists and aided in increasing the movement’s resilience to armed groups operating in southern Algeria and the Sahel.

It has also helped in the development of an experienced and capable intelligence and security sector prepared to deny violent extremist intervention and co-optation. Furthermore, collective violence, especially from jihadists, would delegitimise the movement and its calls for government reform.

The lack of widespread bloodshed and significant property destruction may be one of the reasons that Algerian protests are not getting the same level of English language international media coverage as protests in France, Iraq, Lebanon, Chile and Hong Kong. Limited coverage is also due to the lack of media freedom and foreign media presence in Algeria, leaving many Algerians to rely on social media.

Elections were scheduled, despite being delayed several times, and once again Algerians made it clear that they rejected the polls planned for 12 December 2019, which they largely see as an attempt to regenerate the system.

The Algerian Hirak has been able to merge two contradictory components of revolution and social movements. It is an unorganised movement that seeks a complete overhaul of the Algerian system, but unlike many revolutionary movements, rejects violence.

The success of the Hirak movement for now is in part due to its lack of representatives. This tactic has ensured that everyone is involved, demands are clearly identified and no negotiations take place between the regime and any single representative, thus vesting power with the protesters. For now the Hirak movement doesn’t seem keen to field a representative in the elections but rather wants a reconfiguration of the Algerian state.

Civil unrest in Hong Kong – classified as a democratic state – started as peaceful protests following the Hong Kong government’s introduction of a proposed extradition bill. The situation has escalated into what many Hong Kong citizens perceive to be an existential threat to their autonomy guaranteed under a mini-constitution known as the Basic Law until 2047. The bill magnified fears of mainland encroachment due to previous cases of people in Hong Kong being abducted and extradited to mainland China by Chinese police often for political reasons.

As demonstrations continued to grow both in number and intensity, clashes with protesters escalated into the highest levels of violence Hong Kong has experienced in decades. Chief Executive of Hong Kong Carrie Lam Cheng Yuet-ngor then indefinitely delayed the proposed extradition law. Unfortunately public animosity had grown due to a perceived excessive use of force by police.

Although a leaderless movement as well, there was no thorough planning and strategy like in Algeria. Unlike Algeria, Hong Kong doesn’t have a recent memory of violence, but like Algeria it does have a contemporary historical moment of social demonstrations. Although the Hong Kong protesters have successfully forced the withdrawal of the extradition bill, and for a time appeared to be on track for Carrie Lam to step down, they have yet to realise their aspirations for real political autonomy.

Protests in Hong Kong don’t seem to be dying out anytime soon with no sign of further concessions by Beijing or Carrie Lam despite successful elections.

The contrast in strategic organising is evident in the two countries. The history and memory of civil strife and regime types of these countries have perhaps shaped the response of protesters to security forces and vice versa. Nonetheless, response to widespread protests in Hong Kong shows that repression breeds violent reactions, creating a cycle of bloodshed in which no party benefits. Algeria may continue to avoid violence should the regime relinquish power and allow for substantive democracy in the country.

In the meantime, the strategy to remain leaderless has worked well to put pressure on the ruling elite in the two countries, epitomising what the ancient Chinese philosopher Lao Tzu said: “A leader is best when people barely know he exists.” DM