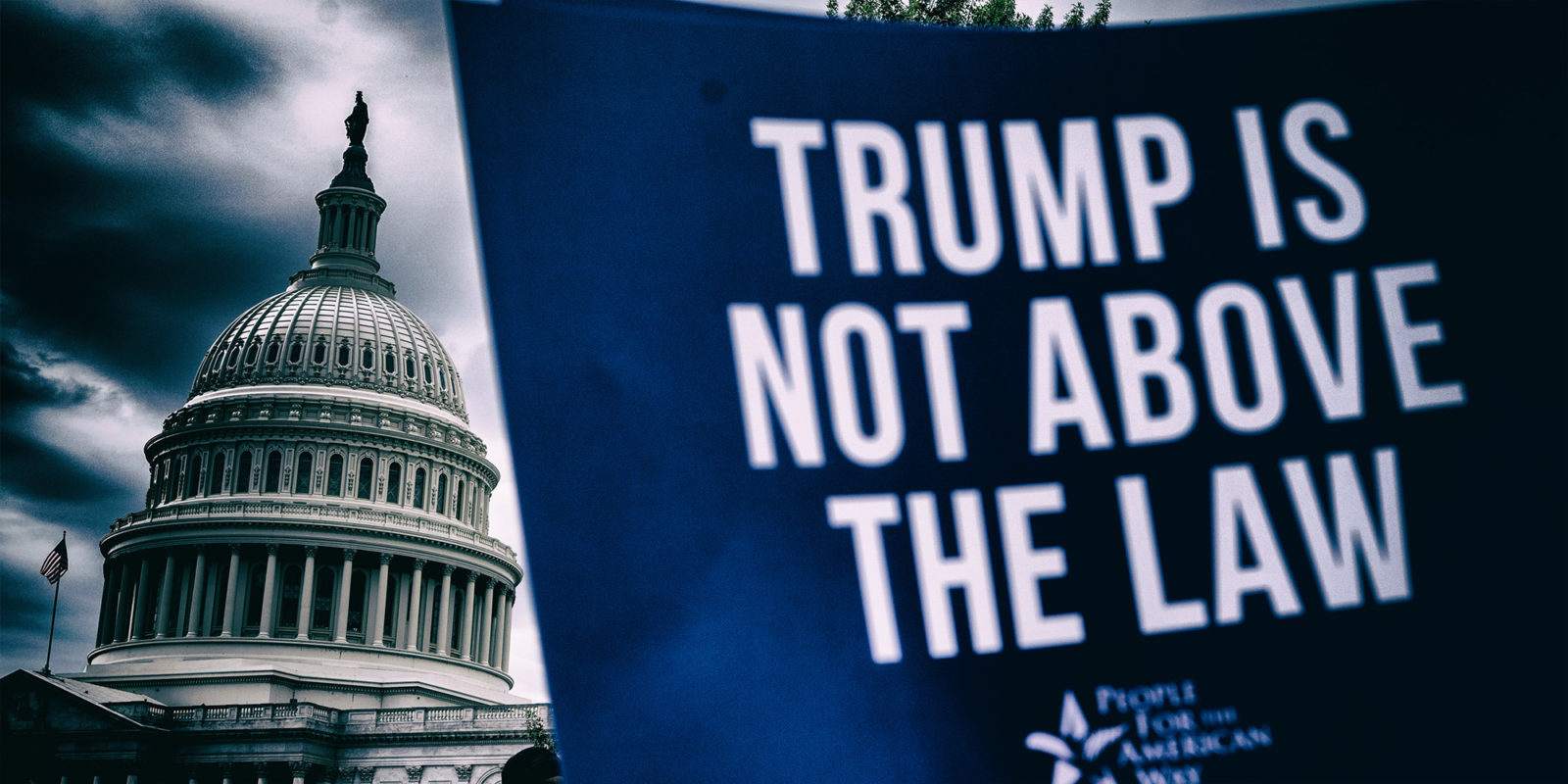 A demonstrator holds a sign as Representative Ilhan Omar, a Democrat from Minnesota, speaks during a rally held in support of impeaching U.S. President Donald Trump in Washington, D.C., U.S., on Thursday, Sept. 26, 2019. (Photo: Alex Edelman/Bloomberg via Getty Images)

The American House of Representatives’ Judiciary Committee has now moved to consideration of the actual articles of impeachment against Donald J Trump. While he will likely survive the Senate trial, how all that will affect the upcoming election increasingly becomes a key question.

On Wednesday, Democratic Speaker of the US House of Representatives Nancy Pelosi, with a group of House committee chairs including Adam Schiff and Jerry Nadler of the Intelligence and Judiciary committees, set out the articles of impeachment in front of a waiting world.

Since the beginning of the American republic, there have only been three previous versions of such an event — the drawing up of articles of impeachment against Presidents Andrew Johnson, Richard Nixon, Bill Clinton, and now Donald J Trump. While Johnson and Clinton were formally impeached, but acquitted by their Senate trial, Nixon resigned before the process reached completion. As a result, it rarely gets more monumental than these events in American political life. Still, there are many steps ahead yet.

There were two specific articles of impeachment formally introduced on Wednesday: the first being Trump’s abuse of power and the second being his obstruction of Congress. The first referred specifically to the now-famous arm-twisting of the Ukrainian president by Donald Trump.

This abuse of presidential power described the bait of anti-tank missiles and other military hardware, along with the lure of a White House meeting between the two presidents. This would be in exchange for a public pledge by the Ukrainian president to announce investigations of former US Vice President Joe Biden and his son on trumped-up accusations of corrupt double-dealing and influence-peddling. Per that first article of impeachment, the efforts by Trump and his henchmen and enablers was a clear — and illegal — effort to use government resources and prestige to improve Trump’s re-election odds by besmirching Joe Biden’s reputation, given Trump’s view that Biden would be his toughest opponent in the coming 2020 election.

The second charge, obstruction of Congress, referred to the constant stonewalling by the Trump White House to prevent any senior officials from testifying at either the earlier hearings (or any future ones, apparently), as well as a total refusal to turn over to Congress any documents and records pertinent to the issues at stake.

The irony in this, of course, has been that it has been a key defence tactic by Trump’s minions to argue that none of the senior officials have been heard from who might well put a more benign — even totally innocent — spin on things, different than the views of those lower ranking, largely career, officials who have already testified. Given the collective oaths of omerta being enforced by the White House, this defence tactic might seem a tad bizarre, but then the whole Trump presidency has had bizarreness as its core hallmark.

Meanwhile, Attorney General William Barr, an increasingly central part of Trump’s version of the well-known (certainly to South Africans from their exposure to Jacob Zuma’s legal antics) strategy of the “Stalingrad defence”, earlier this week found himself refusing to accept the main points of his own department’s inspector general’s report. This was an inquiry about how the FBI (organisationally part of the Justice Department, albeit largely independent) had comported itself vis-a-vis the Trump presidential campaign in 2016.

This behaviour by Barr has helped reinforce the president’s stubborn insistence that he and his accomplices had been spied on and wiretapped during that campaign, and that a dossier of unflattering data and rumours on Trump — the so-called Steele dossier — had been the trigger for all this illegal surveillance. Moreover, it, in turn, had all been part of a so-called “deep state” plot to destroy his campaign (and then his presidency) with the help of conniving FBI agents, the Clinton campaign, and, inevitably, the Ukrainians as well. By contrast, the well-documented Russian intervention in the election on behalf of the Trump campaign has just been a tissue of lies and slander, designed to smudge the truth of the evil Ukrainian efforts.

Barr is increasingly coming across as the bureaucratic equivalent of a family member enabler of a drug addict who can’t kick his habit. And sure enough, there was Trump to be found at a pre-campaign campaign rally, just after the Democrats had released the proposed articles of impeachment, repeating all those hoary old untruths. He called the FBI “scum” and calling out the FBI director (whom Trump appointed after he had fired a predecessor) as a kind of helpless idiot for daring to defend his agency and debunking the Trumpian catechism that Ukraine-is-the-evil-agent-of-the-devil theory, which Trump continues to bring out like a holy relic for his MAGA crowds.

Well then, so what happens now? First of all, the House Judiciary Committee will have its formal debate on the articles of impeachment where they conceivably can be amended or expanded. Don’t bet on that, however, given Speaker Pelosi’s desire to narrow-cast this impeachment, and to resist the urge to add all those other tempting possible charges that could complicate Democratic unity.

Then the committee will formally vote on the articles. Thereafter, Pelosi would bring the committee report and charges to a vote by the full House of Representatives, where, again, given the Democratic majority, it is almost certain to pass. There is the expectation this may all be tied up before Christmas — something certain to put the president in a foul mood when he confronts the Christmas bird.

But of course, the entire process is not finished, not by a long shot. The action would then move to the Senate where that one-hundred-strong body would serve as a very full bench of judges, hearing the cases for and against conviction, and argued by two trial managers. There is the possibility new evidence or testimony might still be introduced; the Supreme Court’s chief justice will chair the proceeding, and senators can only ask questions in writing via the two respective trial managers.

Given the party split in the Senate — 53-47 in favour of Republicans — and where a two-thirds majority is needed for conviction, it is extremely unlikely the president will be convicted, absent startling new testimony or evidence not visible now. Nevertheless, it pays to keep an eye out for the admittedly remote possibility that somewhere out there, there is a memo, an email, a transcript that puts an entirely new and more sinister spin on this saga.

Regardless of the outcome, one thing is certain — this impeachment and all the related questions will be in the centre ring for the upcoming presidential election campaign. This will make it an extremely angry campaign which may rival the level of anger felt in the 1932 election in the middle of the Great Depression, or perhaps even rivalling the 1860 crisis, when the nation confronted the possible end of chattel slavery (and even civil war) if Abraham Lincoln emerged as president.

Regarding this upcoming election, while some analysts and prognosticators are already leaning towards a narrow Trump victory in 2020, it seems to me that there are two complications in that projection. First is that the Trump victory in 2016 really depended on just 78,000 voters spread across Wisconsin, Michigan, and Pennsylvania, giving him narrow victories in those three states, and thus the electoral votes needed to reach the finish line first.

But if the country’s economic circumstances were to sour even a little, the voters in two or even three of those states might switch sides. The current economic boom is already a decade long, the longest in American history, and there are many imponderables that could take the air out of its sails. If that happened, the Clintonian dictum that “it’s the economy, stupid” might nudge things towards the Democrats.

Second, this 2020 election also has a significant number of Republican senators running for re-election, or where the retiring senator is Republican. If the polling begins to move somewhat in favour of a conviction (it was recently at 50% in favour and 43% opposed), a number of Republican senators, although not the needed 20 for a conviction, might elect to sit out the vote or even conceivably turn their backs on the president — if polling data increasingly shows his national support is weakening significantly, most especially in battleground states like the three above, plus Florida or even Ohio.

Of course, all of this is conjecture at this point. But the impeachment trial in the Senate, probably in early January, will now undoubtedly impinge on the country’s general election. The fat is certainly in the fire now, and it will soon be splattering in every direction. DM