Protesters demand that poor communities have access to healthy food 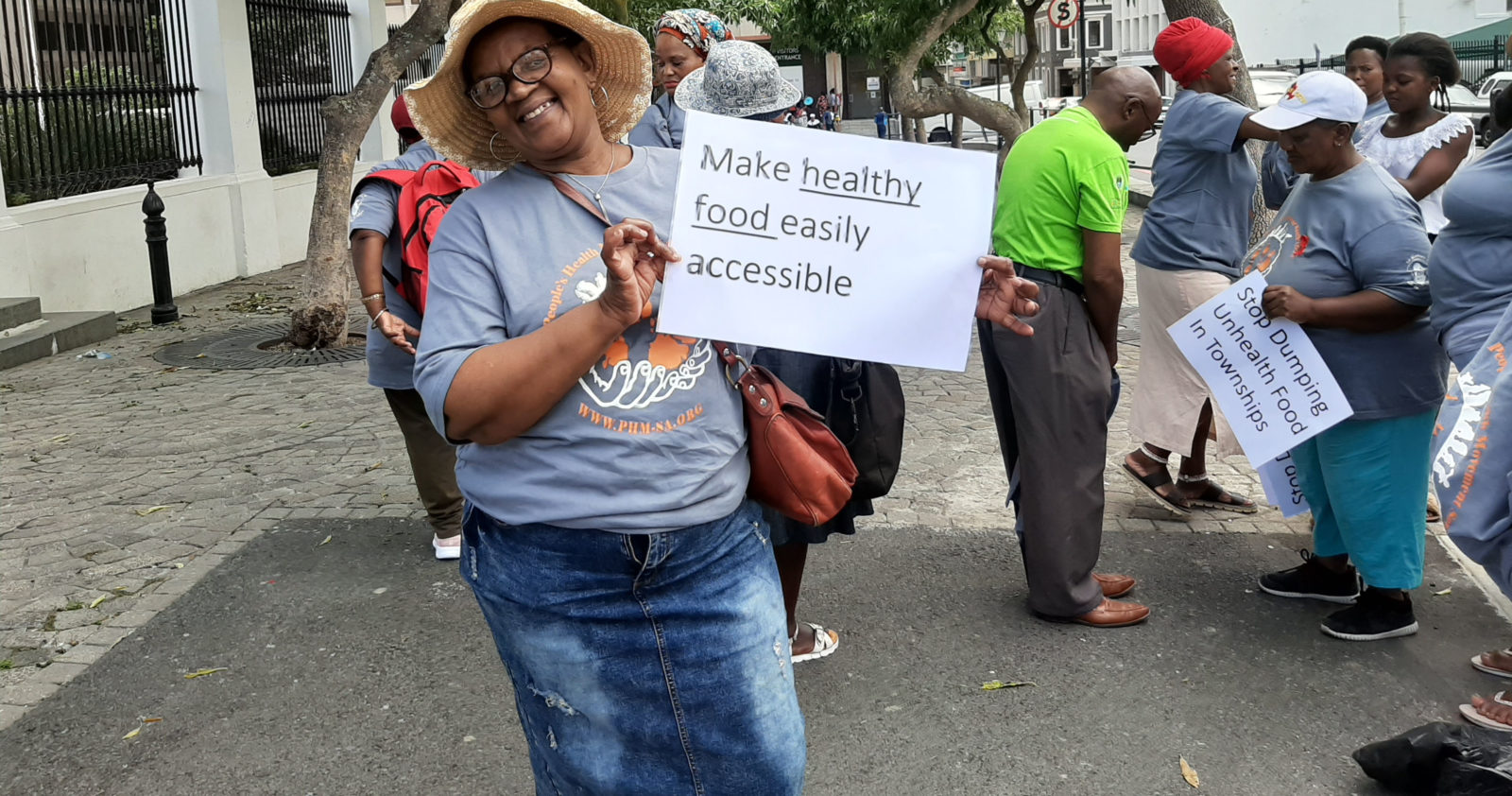 Mavis Manqola stands with her poster as she supports the People's Health Movement to help raise awareness on the lack of access to healthy food in poorer areas. PHOTO: Lia Snijman.

A small group from the People’s Health Movement has been raising awareness in front of Parliament about the lack of access to affordable and healthy food. This lack of access aggravates communities’ suffering from diseases such as diabetes and high blood pressure.

As awareness grows about the effects of food consumption on our health, especially with regards to non-communicable diseases (NCDs) such as diabetes, people are demanding access to healthier food in their communities.

One such group is the People’s Health Movement South Africa, whose members picketed outside Parliament on 10 December 2019 to raise awareness about malnutrition facing poorer communities, along with NCDs.

In a statement, the People’s Health Movement addressed “the double burden of malnutrition – under-nutrition and overweight with poor quality nutrition”. They highlight the fact that healthy food has high costs attached to it and that cheap unhealthy food is much more accessible “in our communities”.

Nowhi Nmdayi, a coordinator for the movement, said a “big march” was planned for 2020.

“Over the past few years, there has been an increase in supermarkets in the townships. Although these make a variety of food easily accessible, they are also a dumping site for unhealthy food, which is often sold at a lower price. They also undermine the livelihoods of small farmers who have to compete with big corporates and commercial producers who enjoy hidden subsidies thanks to the way markets and tax rebates are structured,” said the statement.

Their picket mostly consisted of women. Nmdayi says that this is because many of them are part of health committees. A recent study has also shown that women are more at risk for domestic violence when there is food insecurity in their house.

The picketers had posters with different demands which included that:

“Our kids and our grandkids are getting diabetes at an early age,” said Nmdayi, adding that high blood pressure is also a big issue because of the types of food that are sold at the schools.

According to “data that has been collected,” supermarkets from different socio-economic areas stock different types and quality of food. They say “unhealthy food occupied the highest proportion of shelf space in low-income areas”.

Nmdayi is part of the “Tomorrow programme”, which aims to change “what they’re selling our children”.

“We must show our government what’s good for us,” said Nmdayi. The government must be monitoring and evaluating the food situation in these areas, as well as including the communities affected.

Mavis Manqola, who has been a member of the movement since 2015, said that the government needed to involve communities and provide training and education about healthy eating habits, and to also provide money to people to grow their own produce.

The statement said: “We have a thriving vegetable production sector in Philippi supplying nutritious foods to poor areas of Cape Town, yet the city is intent on destroying the integrity of the Philippi horticultural area in favour of high-end development.”

They also called out gated community developments because they claim that these are bad for food and water security at a time when drought and climate change are looming issues.

Their movement forms part of “a global network of grassroots activists, civil society and academics, predominantly from low- and middle-income countries,” according to their website.

They follow the World Health Organisation’s definition of health, namely “complete mental, physical and social well-being and not merely the absence of disease”.

This means that they do not merely look at health care service, but also people’s living conditions that affect their health.

Their movement also supports the Healthy Living Alliance’s (HEALA) demands, such as the improvement of access to healthy food and water and access to locally sourced foods in low-income areas. Further demands include education on healthy food choices for students and the public, and the regulation and restriction of advertising of unhealthy foods, especially when aimed at children.

The South African Child Gauge 2019 features a chapter on malnutrition in children where they point to the fact that good nutrition is key to helping prevent “child mortality, poor development, adult obesity, the metabolic syndrome, NCDs and early adult mortality”. MC