The stage is set for State Capture’s battle royale as the National Prosecuting Authority tackles the ultra-deep pockets of Regiments Capital and its owners in a bid to safeguard more than R1bn identified as the alleged proceeds of crime linked to the company’s remarkable run of luck when dealing with state-owned entities.

An explosive affidavit by the National Prosecuting Authority’s Hermione Cronje provides the first official glimpse into the NPA’s docket against Regiments Capital, its owners and shareholders accused of being central to the Gupta wave of State Capture.

The NPA is confident and unambiguous. Niven Pillay, Litha Nyhonyha and Eric Wood will face charges of fraud, corruption and money laundering for their alleged role in a criminal conspiracy involving, among others, Gupta kingpin Salim Essa, following tainted deals at Transnet and one of its pension funds.

Cronje, the newly appointed head of the NPA’s Investigative Directorate, sets out reasons for this bold declaration in a 100-page affidavit that was filed for a secret High Court application to freeze the assets of Pillay, Nyhonyha, Wood, their companies and their respective family trusts.

The urgent application paved the way for a provisional restraint order handed down on Monday, 18 November 2019, in terms of the Prevention of Organised Crime Act.

The order compels the three businessmen and their companies to submit, within 10 days, a list of assets including those held by third parties, lawyers or their “alter egos” in the form of various personal trusts, to a court-appointed curator.

Armed with wide-ranging powers, curator Eugene Nel of Vesticraft is also tasked with locating any assets or interests they may have abroad.

The NPA’s application last week was timed to block a sweetheart aspect of Regiments’ deal to pay back more than R500-million to the Transnet Second Defined Benefit Fund (TSDBF) – the lifting of anti-dissipation orders that would have released a lucrative portfolio of assets back into its hands.

“The timing of this application is necessitated by the fact that, as I explain in more detail below, the defendants’ assets will be imminently released from an anti-dissipation order currently in force in favour of the TSDBF, the likely consequence of which will be that the defendants’ most important liquid assets, in the forms of shares and cash, are dissipated,” reads Cronje’s affidavit.

Among their known assets listed in the court application – not all of it subject to the restraint order – are more than R1-billion in Capitec shares, their stake in a R1.4-billion site earmarked for development opposite Sandton’s Gautrain station in Johannesburg and their relatively new office building in Illovo valued at around R178-million.

Regiments Capital has, for several years, been the subject of in-depth investigation and exposés by amaBhungane, which has described the company as the Gupta family’s secret pipeline to state-owned companies.

Pillay, Nyhonyha and Wood were long-time partners in the company but fell out following a Gupta buy-out offer that resulted in Wood leaving to set up Trillian Capital Partners in partnership with Essa in 2016.

The former partners have been at war since the State Capture scandal engulfed their businesses, and multiple court battles between them remain pending.

Now they are being jointly listed as co-defendants in court proceedings for this decisive strike by the NPA’s new regime under the stewardship of South Africa’s new National Director of Public Prosecutions, Shamila Batohi.

The court papers seen by Daily Maverick state that evidence indicates there is reason to believe the “defendants” may be charged and convicted of fraud, corruption and money laundering, from which they have benefited by in excess of R1-billion, and that a confiscation order in that amount may follow a criminal trial.

It has been confirmed that Monday’s order, as well as the application brought under the Prevention of Organised Crime Act,  has been served on the trio.

Pillay, Wood and Nyhonyha will have to go to court early in 2020 to show why this week’s restraint order should not be made final. 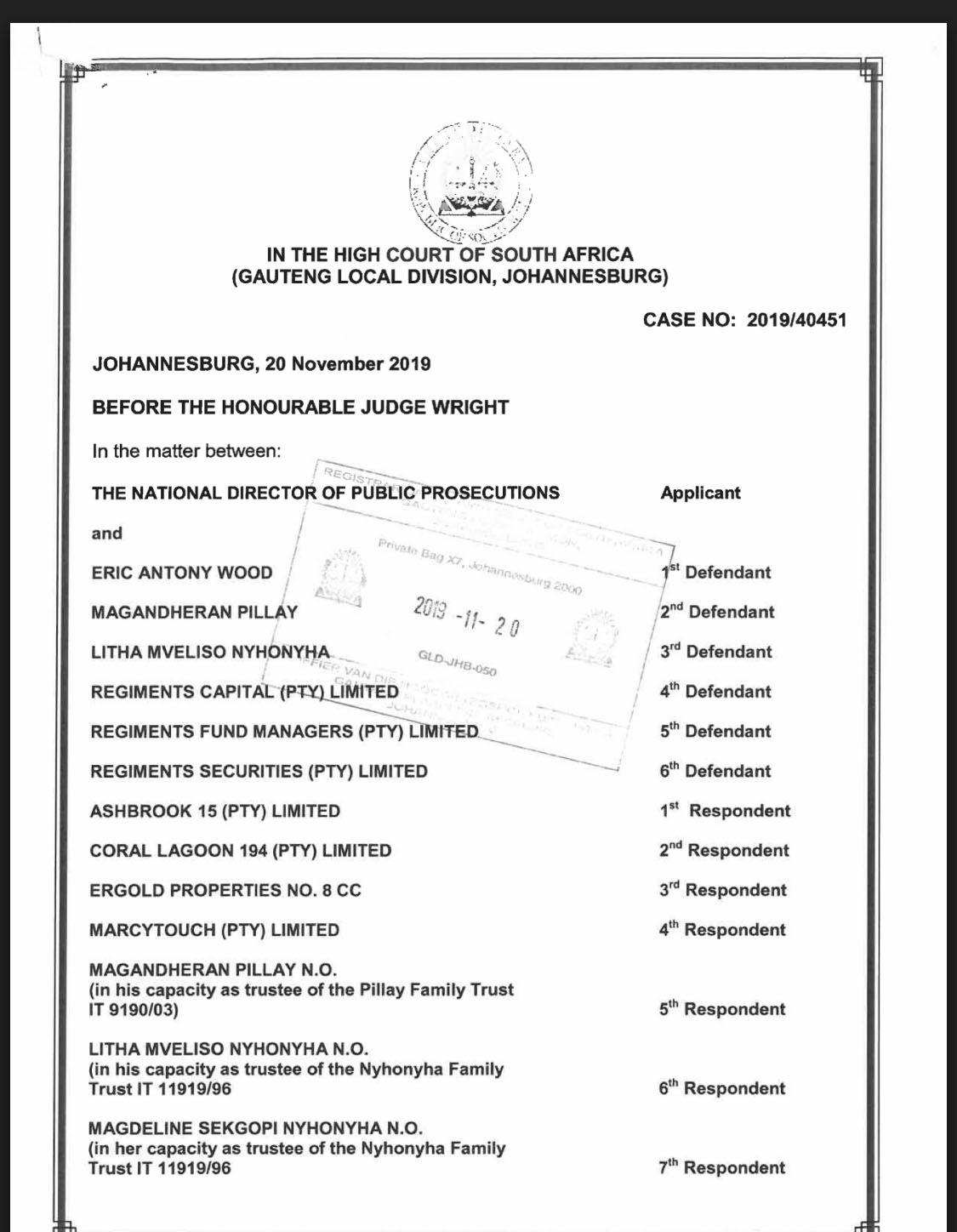 The chain of evidence

Relying on a wide range of evidence, Cronje’s affidavit indicates that the case against Regiments and its owners has been consolidated around their work at Transnet, primarily its irregular appointment as lead adviser on the 1,064 locomotives deal that saw the cost of the project spike from R36-billion to R54-billion.

Cronje describes a chain of “admissible” and “verifiable” evidence, including that provided to the State Capture Commission by Standard Bank’s former group legal counsel, Ian Sinton, and MNS Attorneys as well as other material unearthed through legal, forensic and technical investigations by Fundudzi Forensic Services and Werksmans Attorneys.

As an example, Cronje said Sinton had provided bank statements during his testimony showing how Transnet payments to Regiments had resulted in significant portions of cash being transferred to Essa via Chivita Trading and Homix and onwards to an alleged Gupta entity called Bapu Trading.

The NPA says Regiments had thereby allegedly “knowingly” engaged in a fraudulent or corrupt system that aided money laundering.

Said Cronje: “The evidence shows that Regiments Capital, Regiments Fund Managers, as well as Wood, Pillay and Nyhonyha acted in a corrupt manner as defined in section 3 of the Prevention and Combating of Corrupt Activities Act.”

Furthermore, Cronje said that in October 2012 they allegedly offered and agreed to pay Essa and alleged Gupta fixer Kuben Moodley and their associates a significant portion of any income derived by the Regiments companies from providing services to Transnet through the McKinsey consortium even though neither of the two men had performed any function or role at either Transnet or McKinsey.

Regiments was initially meant to be McKinsey’s supplier development partner but ended up replacing the global consulting firm as the lead adviser on the locomotive deal.

In the 2015/2016 financial year, Regiments received some R429-million from state-owned entities of which it on-paid an aggregate of 64% (R274-million) of its income to Gupta-linked business development partners.

These offers and actual payments to the Gupta-linked companies were designed for them to influence key executives at Transnet and the pension fund to use their authority improperly and unjustifiably to facilitate the appointment and remuneration of Regiments Capital and their subsidiaries, in contravention of applicable procurement and company laws, court papers state.

The NPA also revealed that it intends applying for a search and seizure warrant to extract crucial evidence previously obtained by the TSDBF under a different secret order.

Cronje said it was not yet clear which witnesses would ultimately take the stand in an upcoming trial as this would be determined by the final charge sheet and any admissions made by Pillay, Wood or Nyhonyha in the run-up to the criminal trial.

“I submit the evidence which I have set out above is sufficient to provide reasonable grounds to believe that the defendants will be charged with corruption, money laundering and fraud and that they may be convicted of such offences,” Cronje said.

The NPA’s application was brought ex-parte, meaning no prior notice was given to the parties.

“In this matter, the defendants are suspected of serious crimes of corruption and fraud, which by definition impute a material degree of dishonesty. Both local and international experience provide strong evidence that once accused persons in a criminal matter learn that the State is taking action to deprive them of their ill-gotten gains, they will attempt to dissipate such property,” Cronje said. DM