Three businessmen at the centre of State Capture — Eric Wood, Niven Pillay and Litha Nyhonyha, their companies and family trusts have been ordered to surrender all assets to a court-appointed curator after the National Prosecuting Authority successfully obtained a High Court order in terms of the Prevention of Organised Crime Act.

The Asset Forfeiture Unit of the National Prosecuting Authority has obtained a provisional High Court order to freeze the assets of the State Capture-accused financial advisory company, Regiments Capital.

A devastatingly comprehensive order handed down in chambers at the High Court in Johannesburg on Monday provides for all assets linked to Regiments, its remaining two directors, Niven Pillay and Litha Nyhonyha and their former partner, Eric Wood — as well as those held by their respective family trusts, by their lawyers or other third parties — to be surrendered to a court-appointed curator.

Secured by the NPA in terms of the Prevention of Organised Crime Act, the order compels the “defendants,” to disclose and surrender all assets and interests in South Africa and abroad to a court-appointed curator, Eugene Nel of Vesticraft.

Daily Maverick has not had sight of the NPA’s application for this case, but the order does indicate that three businessmen, Regiments Capital, Regiments Securities and Regiments Fund Managers are potential defendants in pending criminal proceedings to be launched by the prosecuting authority.

It is not immediately clear whether Wood, Pillay or Nyhonyha or their companies will challenge the draft order, one of the most significant since the NPA’s new-guard under Shamila Batohi began tackling State Capture-linked cases earlier in 2019.

In terms of the court order, Pillay, Wood and Nyhonyha are able to hang on to their primary homes and non-luxury items such as clothing, bedding, household appliances or items which may reasonably be allowed for by the curator.

The order also provides that financial institutions in South Africa and abroad which are known, or suspected to hold monies, interests or other assets subject to the order, be notified thereof, and for the curator to arrange for the recovery of such.

Specifically excluded from the order, are the Capitec shares Regiments had agreed to transfer and sell to the Transnet Second Defined Benefit Fund (TSDBF). 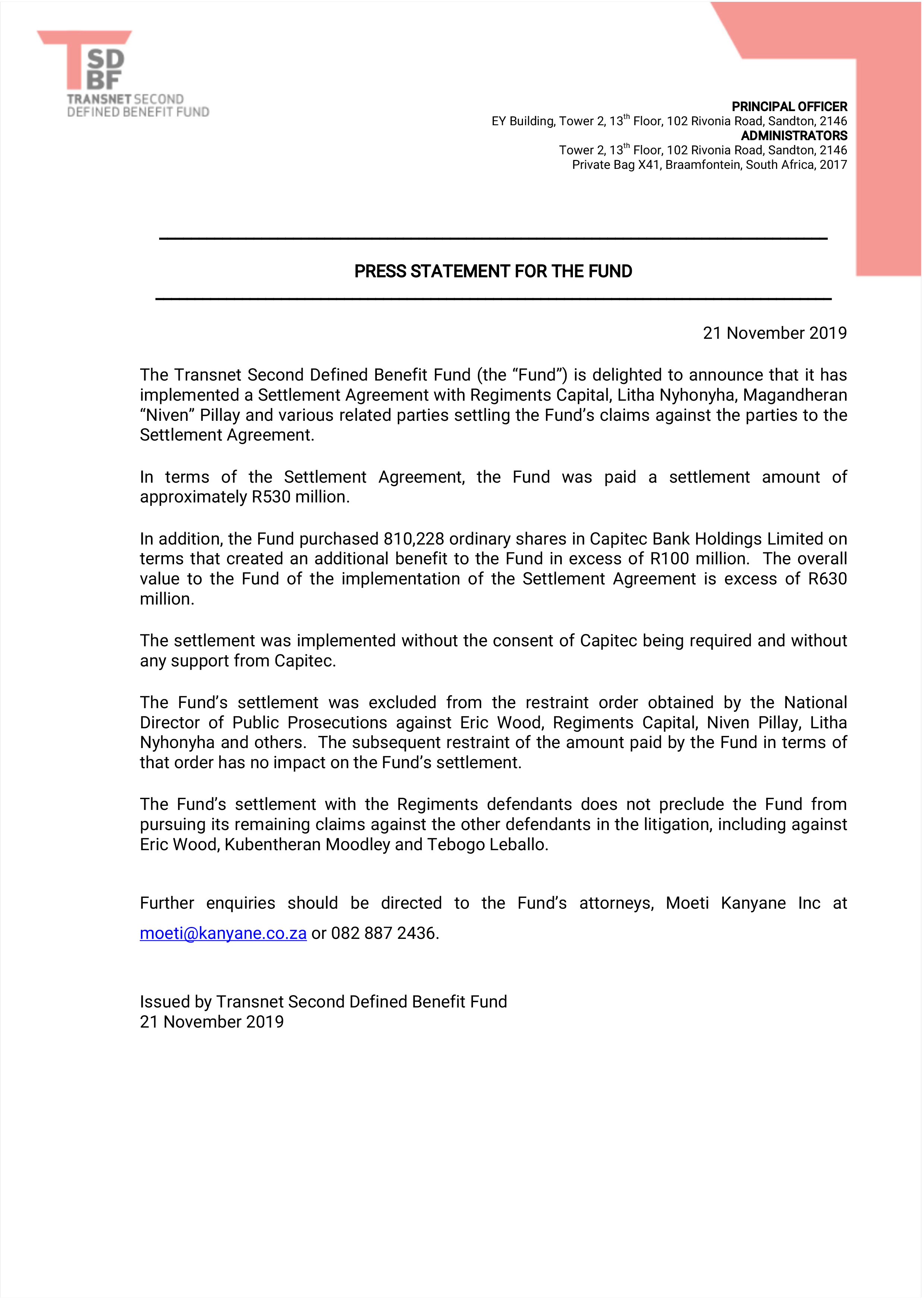 In that earlier deal struck with the TSDBF — billed as an effort by Pillay and Nyhonyha to “right the wrongs” of State Capture — Regiments had agreed to a payment in excess of R500-million to settle civil claims emanating from a series of controversial swap transactions.

Part of that settlement deal with the TSDBF involved the lifting of anti dissipation orders that have been in place and which had, until now, blocked the three businessmen from accessing their assets held in Regiments and several other entities, including Cedar Park Properties through which they hold a stake in Kgoro Central, one of the country’s prestige development sites in Sandton.

“The defendants, respondents and any other person with knowledge of this order are hereby prohibited from dealing in any manner with the property except as required or permitted by this order.”

“The curator bonus will further be entitled to deal with any funds in any bank accounts forming part of the property and is accordingly authorised to hold the necessary signing powers on such accounts and to give directions to banking institutions and other persons in control of those funds regarding the use of such funds.”

Furthermore, the order provides that the curator shall have the power and authority to act in any capacity to locate assets and bring such under the jurisdiction of the court.

“The powers of the curator bonis extend to all the property wherever it may be situated in the world.”

Regiments is deeply implicated in State Capture following tainted deals at Transnet and allegations of kick-backs to a string of Gupta-linked front companies including Homix.

Wood, Pillay and Nyhonyha have 10 days from the date of the order to provide the curator with a list of property and assets covered by the order or the whereabouts thereof.

The curator is expected to draw up a full schedule of assets by 31 January 2020 for such to be served on any party wishing to oppose the confirmation of the draft order.

Details of the strike against Regiments comes on the back of the arrest of former state security minister Bongani Bongo on Thursday. DM