A fresh legal battle between the former partners of Regiments Capital have revealed details of a sneaky deal to have the company pay back hundreds of millions of rand to a Transnet pension fund. That deal, though, is already at risk amid an interdict application filed by former director, Eric Wood, a representative of a trust that holds a 32% stake in the company.

The Transnet Second Defined Benefit Fund has reached a R500-million settlement agreement with Regiments Capital in a deal that could mitigate against a wave of State Capture scandals the embattled company faces.

Regiments appears to have litigation fatigue and seeks to wipe out hundreds of millions of rand in civil claims, in part to “right the wrongs” following three years of exhaustive exposés involving its work at state-owned companies and alleged kickbacks to Gupta-linked front companies.

Signed on 8 August 2019, the agreement provides for the fund to take up 810,000 Capitec shares held through a shareholding vehicle in the Regiments stable.

It also discharges the company’s remaining two directors, Litha Nhyonhya and Niven Pillay, the majority shareholders, from personal liability in the civil litigation and unburdens them from the restrictive shackles of anti-dissipation court orders previously obtained by the fund.

Pillay, Nhyonyha and several other parties have been embroiled in protracted litigation brought by Transnet Second Defined Benefit Fund following a series of deals and alleged money laundering transactions, part of which, the fund contends, had ended up helping the Guptas pay for their acquisition of Optimum Coal Mine. 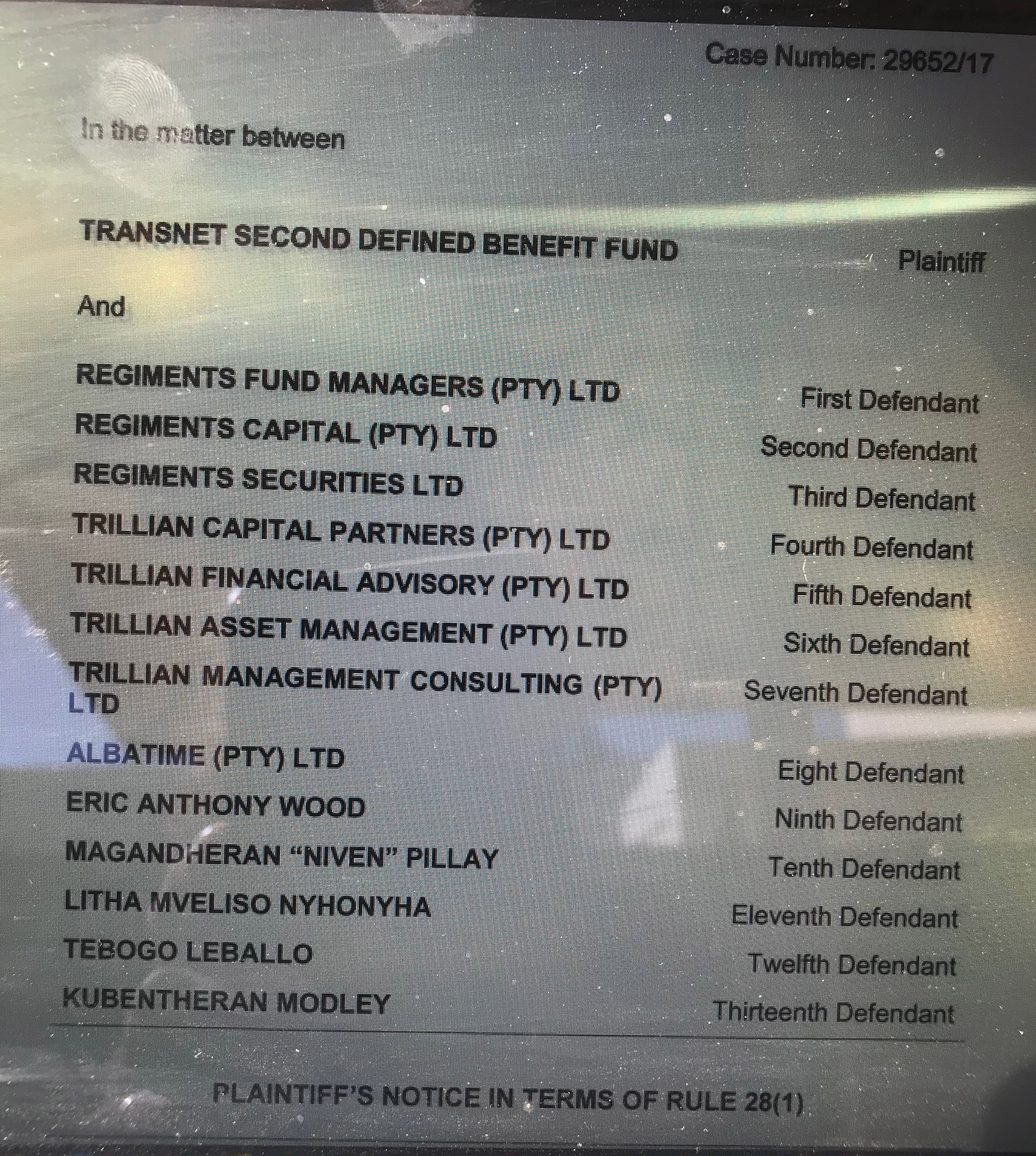 This settlement puts paid to litigation emanating from a previous Regiments mandate to administer the pension fund and a deal that resulted in a controversial interest rate swop transaction that not only cost the fund, but also saddled Transnet with an escalating R1.4-billion in extra costs.

Transnet, in response to an enquiry from Daily Maverick, said that it and the fund were “aligned” on the agreement struck with Regiments. Lawyers for Regiments, who represent Pillay and Nhyonyha too, did not respond to a formal press enquiry.

Daily Maverick has exclusively obtained details of the deal as a result of a legal challenge brought by one of four Regiments shareholders, the Zara Trust, which holds a 32% stake in the company.

The trust is represented by former Regiments director, Eric Wood, who had split from his partners of 11 years in 2016 to establish Trillian Capital Partners along with Gupta kingpin, Salim Essa.

The freshly inked deal does not cover Wood or his company, Trillian, both cited in the initial Transnet Second Defined Benefit Fund civil claim, and it was seemingly pulled off without his input or approval as a representative of the trust that co-owns Regiments.

As a result, the Zara Trust, with Wood as its representative, filed an application for an interdict to block implementation thereof – he fears that, once implemented, the deal may result in his former partners adopting a “mercenary” mission to dissipate company assets.

In an affidavit submitted, Wood charges that his former partners have struck the deal to sell and transfer the Capitec shares, in lieu of those civil claims, behind his back, that they had failed to declare “clear and unsalvageable” personal financial interests in concluding it, and had pushed through a board resolution on the very day they signed on the dotted line.

They also allegedly sought to ratify the alleged non-disclosure of their personal financial interest, a requirement of the Companies Act, in the transaction when they presented him with limited paperwork thereof on a Saturday night, some 48 hours after the deal was concluded.

The pair’s conduct in not disclosing their personal interest, Wood says, is consistent with the “secretive, dishonest, self-serving approach” they have allegedly adopted since their split in 2016.

Fundamentally, Wood says, this settlement deal is designed to restore full and unchecked access to the assets of Regiments for Nhyonhya and Pillay.

Wood and his former partners are embroiled in an acrimonious battle after they agreed to part ways and split the assets of the company in 2016.

Key among those assets is the Capitec shares, their interests in an Illovo building that previously housed Regiments, and the landmark Kgoro property under development in Africa’s richest square mile of Sandton.

Wood, in an affidavit filed, accuses Pillay and Nhyonhya of deliberately withholding vital company information from him for the past three years and says the deal with the Transnet Second Defined Benefit Fund would release them from the constraints of the anti-dissipation orders, which has provided some comfort to him pending the outcome of litigation between the three of them.

The interdict application is a direct response to the agreement struck between Regiments and the fund and follows on a liquidation application that Wood has already initiated.

Wood says the Zara Trust is potentially massively prejudiced as a result of the deal with the fund and implies that the two Regiments directors may be digging into jointly-owned company assets to settle other civil claims emanating from the State Capture saga.

There could be more deals

Wood says that in April 2019, Transnet chairman Dr Popo Molefe hinted at the prospect of another deal under negotiation between Regiments and Transnet lawyers, MNS Attorneys.

Molefe, in testimony at the State Capture Commission, Wood said, alluded to the negotiations relating to Transnet claims of R189-million and R79-million respectively against the company.

Wood seeks for the settlement agreement with the fund to be suspended pending a court determination on the validity thereof. If unsuccessful, Wood seeks an anti-dissipation order in order to protect the interests of the Zara Trust pending the liquidation application.

Notwithstanding the breakdown in the relationship between him, Pillay and Nhyonhya, Wood says the Zara Trust is entitled to continued insight into the affairs of the company.

Yet, his former partners have allegedly consistently fobbed off demands for copies of financial statements and, at times, also about big-money transactions that would impact on the interests of the trust.

If the settlement agreement is implemented, Pillay and Nhyonhya will do everything they can to strip Regiments and its subsidiaries of valuable assets, a situation that will render any relief the Zara Trust seeks in the liquidation bid nugatory, Wood alleges.

He fears that as part of their “stratagem to strip assets”, Nhyonhya and Pillay would seek to conceal and dispose of information that will be required in the event his application for liquidation is successful.

He attached the agreement between the fund and Regiments which states: “Upon the successful conclusion of the transaction and the transfer of the shares to the fund, Regiments, its directors and other affected entities shall be released from an existing restraint order.” 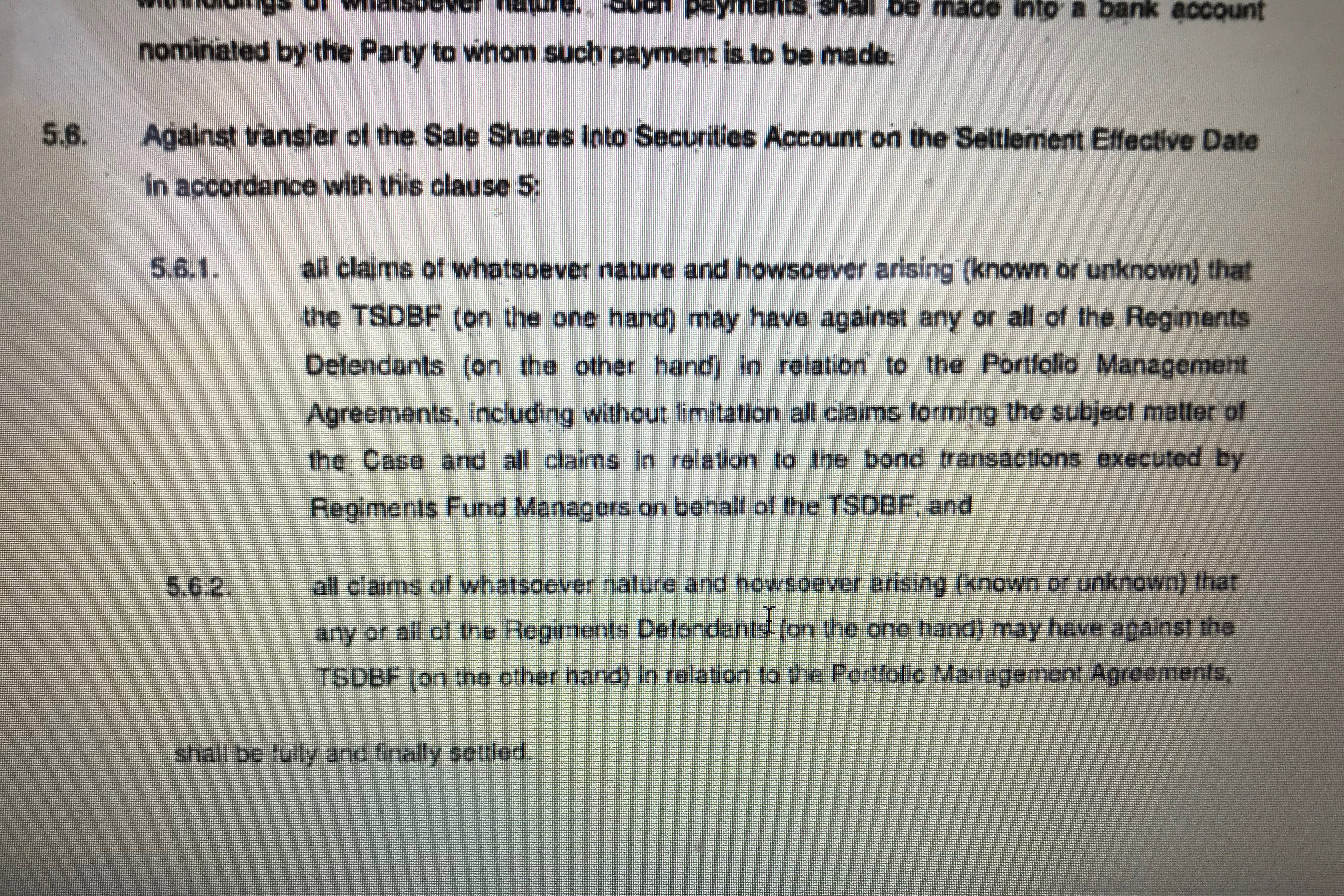 Furthermore, that within two days of such, the fund is to provide written confirmation that claims it has against Regiments are considered settled, that it abandons Anton Piller proceedings against the company and its two directors and returns keys to a safety deposit box where material seized during the execution of an August 2018 Anton Piller order be returned to the company’s attorneys.

Wood states that he believes there are valid defences in respect of the various civil claims and is alarmed at information suggesting his former partners could be looking to settle as many as six such matters.

Any settlement that excludes him would cause irreparable harm, especially in view of the alleged deliberate moves to keep him in the dark about the affairs of Regiments, Wood says.

The manner in which the deal with the Transnet Second Defined Benefit Fund was done is “unlawful and prejudicial to the Zara Trust” and Wood believes an application for the liquidation of Regiments is justified.

Responding affidavits are yet to be filed but the application for an interdict to block the settlement deal with the Transnet Second Defined Benefit Fund in the interim is scheduled to be heard next month.

Daily Maverick was unable to get comment from Wood and the article may be updated if comment is obtained. DM