Unearthing the character and flavours of the West Coast 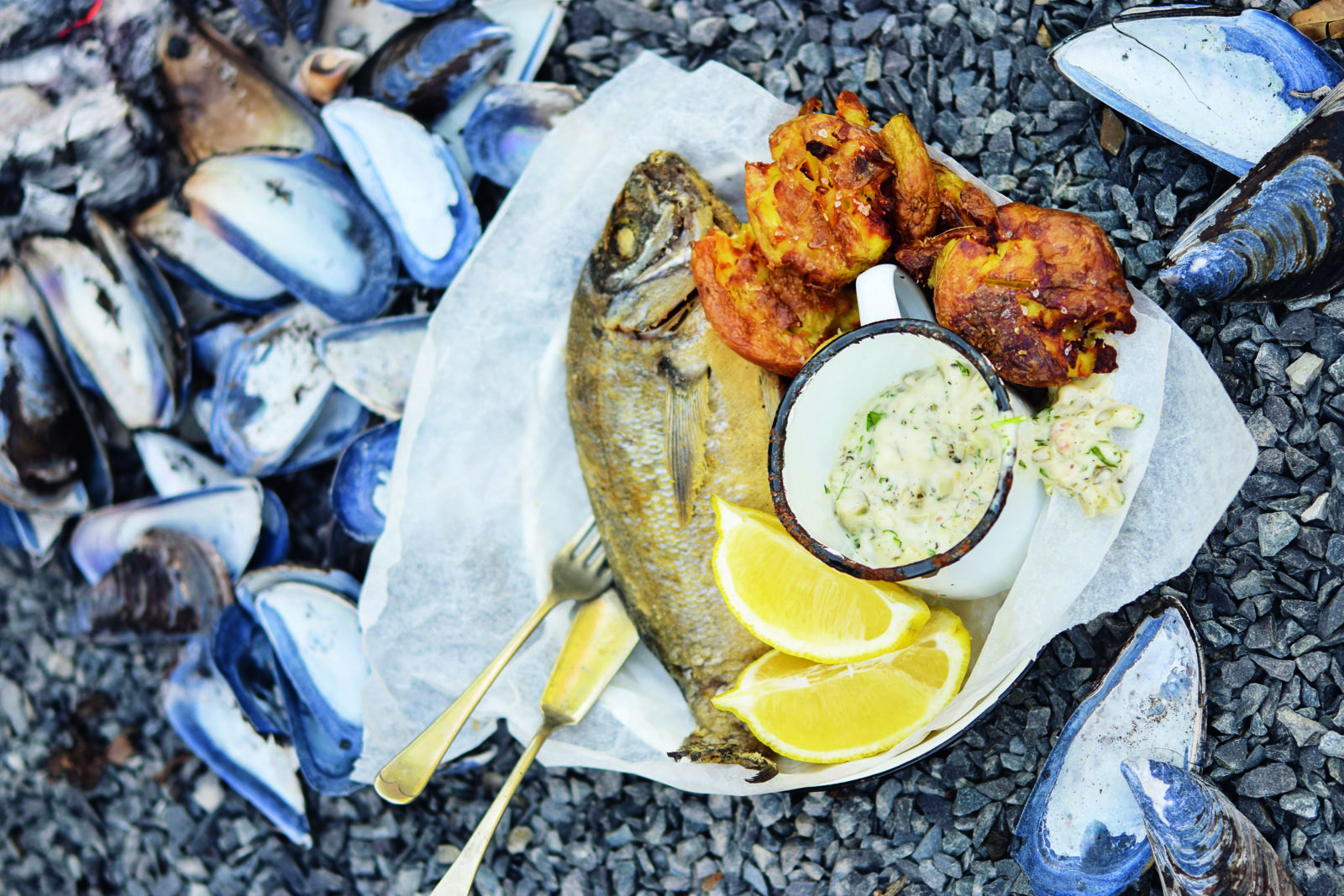 A seaside lunch of fish in crispy batter and golden chips doused with salt and vinegar is the stuff of holiday nostalgia. Photo: Georgia East

Exploring this wildly beautiful coastline and the people that call it home, West Coast Wander takes readers on a culinary caper from Yzerfontein to Doringbaai, documenting each delicious detour. As for trendy Paternoster? Hmmm, not so much, according to this forthright author.

Say “West Coast” and the first things that come to mind are fish, crayfish, mussels, sand dunes, the ocean and a fair bit of wilderness. In the introduction to the chapter Fish & Seafood, West Coast Wander author Georgia East says it herself: “If you had to name the single most iconic ingredient of the West Coast, it would be fish. Fish is the backbone of the industry, the reason why so many towns explored in this book exist and a personal preference when it comes to what’s on my plate.”

Unsurprisingly, it’s the biggest chapter, but East’s mission is to show us that the West Coast is so much more than this – the region is also a bounty of bread, wine, lemons, potatoes, sheep, pomegranates, and more.

“You can see the West Coast with two very separate kinds of eyes,” says East. “You can go in and see it on a one-dimensional level – fishing houses, fishing boats, a little bit grubby, a little bit rundown, not always pretty. Or you can go in and see it as a place where it’s not easy to live –weather conditions are harsh, no green, no trees, it’s not that aesthetically pleasing.

“But look at it with the right kind of eyes, talk to the people, find out what they do, find out what it takes – not those who have lived there for three generations. I’m more interested in the ones who made a conscious decision to make the West Coast their home, now. What’s it like? Where is it going in the future?”

The book features these people, instead of being an historical homage, which has been done many times before, says East, whose relationship with the region reaches back to her grandparents. “A lot of people assume I grew up there; I was definitely conceived there,” she laughs. “My mother’s parents had a home in Velddrif from the early 1980s and that’s where my parents met. Although my dad sold his Port Owen house the year I was born – 1991 – and my grandparents sold soon after, I have very fond memories of going up there and I’ve had this pull to the area ever since.”

East didn’t return much as a teenager, but in her mid-20s she discovered a newfound love for the place and would visit often. The idea for the book came about two years ago, expanding on a series of articles she wrote for House & Leisure. “I proposed covering four towns up the West Coast, focusing on what I felt to be an integral ingredient from each town.

“So, for example, Velddrif was bokkoms – it’s the bokkoms capital. Hopefield was honey, because they’ve got a lot of wild flowers and fynbos. St Helena Bay was lamb. There was an old butchery there and my parents used to tell me beautiful stories about it. The ruin is still there. Elands Bay was potatoes. Everyone thinks crayfish, but the West Coast not only has red gold, it has yellow gold – the Sandveld area is the second-biggest producer of potatoes in South Africa.

“Instead of going the crayfish route – because they are severely overfished and endangered – I decided to focus on monkfish. It was big in the Seventies and it should be big now. It’s affordable, sustainable and delicious.”

At the beginning of 2018, East was chatting to her mom, Andrea, about how she’d always wanted to put together a recipe book but was held back by not knowing how to go about it and a fear of rejection. Andrea offered the best advice: why don’t you just try?

The result was interest from not one, but two publishers, one of which was concerned East wasn’t well-known enough. “I took umbrage with that because it’s not about me, it’s about the West Coast!” She opted to publish with Penguin Random House and is still pinching herself.

About nine months of travelling up and down the West Coast ensued, all the way up to Doringbaai (nearly 300km from Cape Town) in the Namaqualand.

“The West Coast goes all the way up to Port Nolloth, but most Capetonians think only as far as Lambert’s Bay,” says East, adding that she “pointedly” skipped Paternoster.

“I admire the people living there. It’s a hard town to make a living in, as with any West Coast town, but I feel it gives a contrived view of what the West Coast is. And the fact that it’s kind of turned into the Camps Bay of the West Coast, with property prices pushing locals out, it’s a bit of a contentious issue. They’ve just opened their Crayfish Wharf there. There’s an Asian restaurant because, you know, nothing says ‘West Coast’ like a bowl of ramen,” she says wryly.

The food element in West Coast Wander takes in Mediterranean-style cooking and traditional West Coast cuisine. It makes a lot of sense, says East, as the climates and ingredients are so similar.

“It’s really simplified, using minimal ingredients endemic to the West Coast, many of which I repeat. The local dishes are in their own right delicious, but I feel people are a lot more health conscious and ingredient conscious, and we don’t have the time to be in the kitchen for hours on end. So, it’s an amalgamation of West Coast cuisine and pared-down Mediterranean flavour.

“There don’t have to be 10-million steps. At the end of the day, I’m not a chef, I’m a cook,” she says, adding that often in the kitchen she hasn’t a clue what she’s doing and just wings it. Her recipes tell a different story – they are everything she promises: simple, easy, accessible and filled with joy.

“I only started getting interested in cooking in my late teens … and got relatively good in my mid-20s,” she says. “Even now, I get terrified if someone asks me to cook for them. I’ll do it, I adore it, but I get very nervous.”

Complementing the recipes in West Coast Wander is East’s own photography and food styling. A journalism graduate from UCT, she taught herself these additional skills through a process of imitation, learning from pictures she liked.

“I got my first professional camera eight years ago and I’m now on my third. I absolutely adore photography, predominantly food. It’s amazing to be able to tell a story behind a dish, or even an ingredient, and I like to encourage more appreciation for our food.”

East hopes to one day publish a modern food bible that is akin to Lannice Snyman’s Free From The Sea. “I grew up with that book. There’s a recipe homage to her in West Coast Wander – one of my favourites,” she smiles.

The book is a personal milestone for East, but her main desire is to encourage people to visit the West Coast. “Not just sit on the beach, although there’s nothing wrong with that – but go explore. Go meet Marinus Kruger, who bakes bread in his garage; go taste the wines of Fryer’s Cove. There’s so much more to be seen. Again, two kinds of eyes: the very obvious, or delve a little deeper and prepare to be surprised.” DM