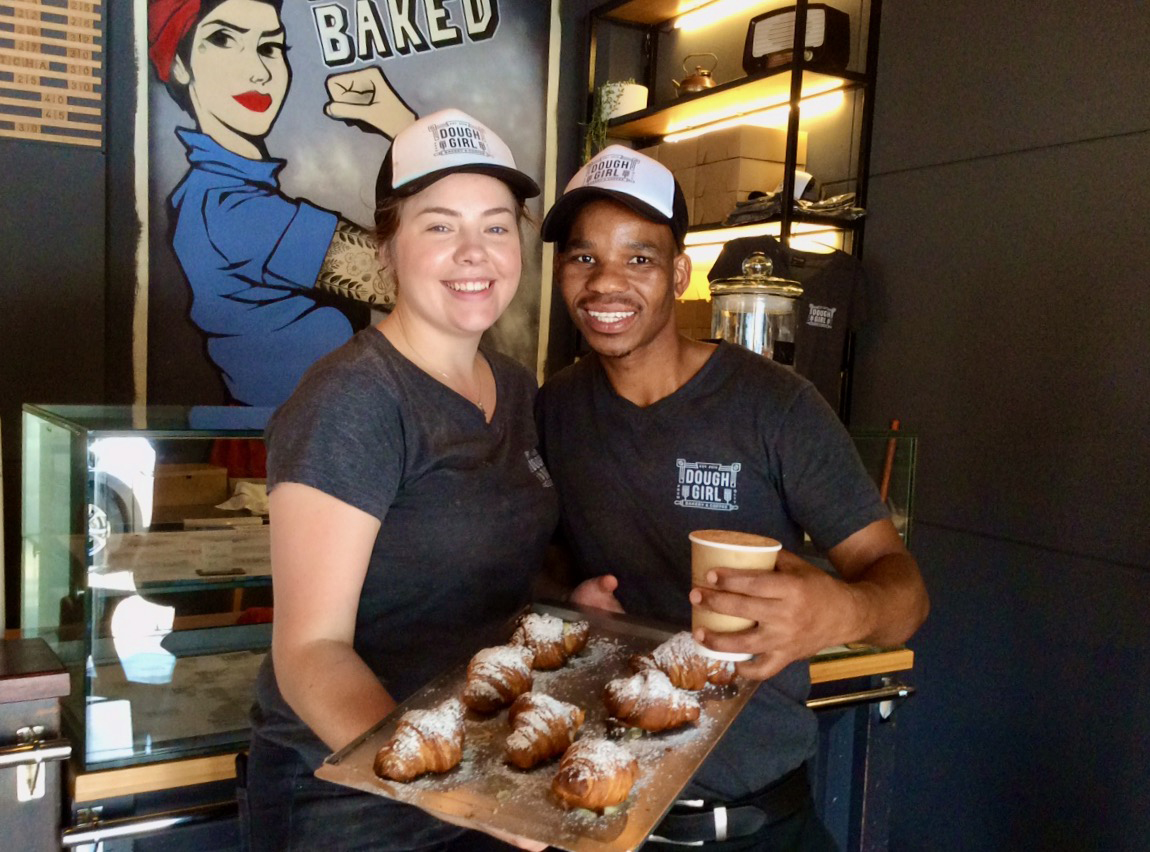 From croissants to her ‘fat kid food’ indulgences, Courtney Stuart is baking her heart out in Durban. Winning fans. Luring them with creative surprises, quality ingredients and flavour. She runs out often. They keep coming back. Intermittent reinforcement at its best. Plus social media smarts. She’s baking flat out and thriving on it.

What to have? The single remaining “deep-fried kettle” croissant, which is wearing a little crown of kettle-popped corn, caramel and white chocolate?

I hesitate for a moment, keen to check my other options before deciding – and it’s gone.

Turns out a moment is too long in the world of “fat-kid food” – a term you can use with abandon and impunity if you’re 20 years old and running Durban’s newest bake shop. Which opened and became an instant hit. Growing fans by the day on Instagram and Facebook. Turning out croissants the classic way, buttery, four times book-folded, and voluptuously squidgy to the touch before they go in; airy and perfectly-golden-crispy when they come out. Sometimes plain. Sometimes savoury. Sometimes filled with custard, or something else luscious and tasty.

Always something, too, that will come as a surprise. Like the offcuts of croissant dough that haven’t made the roll: fashioned into cinnamon twists. Or wrapped around red velvet cheesecake and deep fried. Or…

But back to choosing. I consider a pastel de nata, of which several remain. Then recall my scrumptious Belem, Lisbon, pastéis de nata encounter. And decide, no. Silly to try to repeat a good international experience and perhaps find myself trying to compare from memory. Never a good idea for present-time pleasure.

This “bomb” is what she calls her “doughee”.

“Doughees are a trend in the US,” she tells me, referring me to links on Instagram, which has overtaken Twitter for instant announcements among the in-the-know foodie set.

For her doughee, Stuart rolls edge-offcuts from her baked chocolate brownies into balls, covers these in peanut-butter-cookie-dough and coats them in Callibaut dark chocolate.

“Too small,” greedy me thinks, deciding to try the doughee another time.

Aside: The first time I visit Dough Girl, it’s early afternoon. The cupboard is – almost – bare. I guess the flour-spattered young woman behind the counter is the baker so pepper her and find it truly cool that she doesn’t know who I am, doesn’t ask. Just answers with disarming honesty and – yes, delight.

Her reference to “fat-kid food” that day, in the context of the doughee, makes me think of “what you resist, persists” food. So why resist? But more about that later.

Now, finally, I settle on what I cross my fingers won’t be a disappointment. Because so often they are. A chocolate brownie. Intrigued, as when I ask “are those macadamias?” pointing to the white bits in the dark-chocolate brown, I am told by barista and front-of-house pastry-partner, Zamo Nkwanyana: “no, that’s white chocolate”. Before he makes my double-espresso to have with it.

Well, no exaggeration and not wanting to enthuse, I have to admit this rich and luscious, oh-so-chocolatey and fudgie, chewy-melty and crispy-to-bite-into sensual slice is possibly the best chocolate brownie I’ve tried.

“It’s made with love,” Stuart laughs when asked later what makes them so good.

But then shares the true “secret”. She uses three types of Callebaut chocolate, which of course is Belgian and some say the best. There’s 70% dark, 10% white and also Callebaut cocoa powder in her recipe.

Stuart might only be 20. But she has fit quite a bit of baking into at least half of those years.

She started, in a sense professionally, at age 11.

“My mom used to bake from home for Judd Campbell when he had Corner Café,” she tells me.

We talk in the Dough Girl kitchen on two consecutive Saturdays, when both times she is focused on keeping up with demand for the croissants.

It is time-consuming and labour-intensive. That’s my verdict, both from having read about the croissant process and now, watching Stuart. As she goes through the equivalent of a gym-workout with her wooden rolling pin, she says she hopes one day soon to get an automated dough-rolling machine. Not as artisanal, perhaps. But, she says, she’ll be operating it and it will give her the thinness she wants, which hand-rolling isn’t. And she’ll still slice, weigh (for consistency) and hand-fold and glaze individually.

Meanwhile, she has the sort of lightness of being that comes with passion and enthusiasm. For one bake I watched her go through the whole process – to put four plain (two of which had been sold and paid for, the purchaser happy to return for pick-up) and six cheesy ones in the oven.

Corner Café is now closed but in its day it was a favourite coffee, pastry and delicious-food spot in Glenwood.

Helping her mom, Sam Stuart, “who is now my sous chef”, she laughs, “given that things here picked up so quickly” (juggled with behind-the-counter teamwork with Nkwanyana), is how the young Stuart got involved. “How I fell in love with baking.”

Back then, baking rookie Stuart started making biscuits and cupcakes “for Judd”.

“He and his wife were family friends and I did things a little girl could do. It was for fun, really,” she says, stopping to focus on me over the croissant dough.

At some point she started making birthday cakes. Initially her own. Then there were private orders.

And while still at high school, at Maris Stella just a few blocks from Dough Girl, she raised money — flights and travel expenses — for trips to Thailand then Vietnam she did with the World Challenge “transformative travel” organisation. Cupcake orders, private orders: what she baked sold like proverbial hotcakes.

In Grade 11 Stuart went to a career day where chef Jackie Cameron was recruiting for her eponymous culinary school. “I went and drew a star next to my name on her sign-up sheet,” she bubbles. “She only takes 15 people. I was terrified she would overlook me. I knew I had to go there, come hell or high water.”

After that, in Stuart’s words, “I applied and applied!” And at the end of Grade 11, heard she’d been accepted.

No gap-year thoughts. “I was sorted before anyone else in my class. I knew exactly what I was going to do.”

The comprehensive Jackie Cameron course – baking is just one small part – is 18 months. Stuart lived at the school’s Hilton campus for the duration.

Before she started, she knew where she wanted to do the six-month “industry experience” component that follows the 18-months coursework. From googling, she had set her sights on Jason Bakery in Cape Town, resonating with the Jason philosophy: “We keep it real. We keep it fresh. We keep it interesting. We bake today for today.”

“I was obsessed,” she enthuses. “I followed the bakery on social media. He (Jason Lilley) was an idol to me. His style, I relate to, and say it’s also my style. It is how I want to bake.”

So yes, it is where she interned. And learned. And picked up ideas she now uses and adapts at Dough Girl. Same as she uses and adapts a Jackie Cameron cake recipe for the once-a-week cake she bakes and sells by the slice on a Saturday.

“Baked for today” is the Dough Girl pledge. If and when they run out: that’s it. As they say on Facebook and Instagram: “The early bird catches the donut.” Which, of course, is perfect intermittent reinforcement. Guaranteed addiction.

Same as her fat-kid food. “I find it just the right term to describe some of the food I make – cause it would make any kid who loves food happy.”

“For me,” she adds, chuckling, “it’s when I’m eating one thing and dream about eating it a different way. So, for example, you’re eating a brownie and you go, oh my word, imagine if we could deep-fry this brownie and cover it with chocolate so it’s really indulgent. How rich and satisfying would that be?”

In her world, she gets to create the indulgences she dreams up. And share the satisfaction.

Life for the 20-year-old is a whirlwind right now, given the instant success and interest. She is open six days a week. (Closed Sundays. Although, she says, she often goes in on a Sunday to prep.)

The other six days, it’s up at 3am; drive in from Westville (where she lives with her folks and brother, who is writing matric); start baking at 4am.

This is the sweet life. A rolling pin, a whisk, dollops of creativity and foodie fun, early to bed – between 8pm and 9pm. She’s baking flat out and thriving on it. DM