On the Edge of Change, Episode Five: Marine plastic pollution and the problem with ocean clean ups 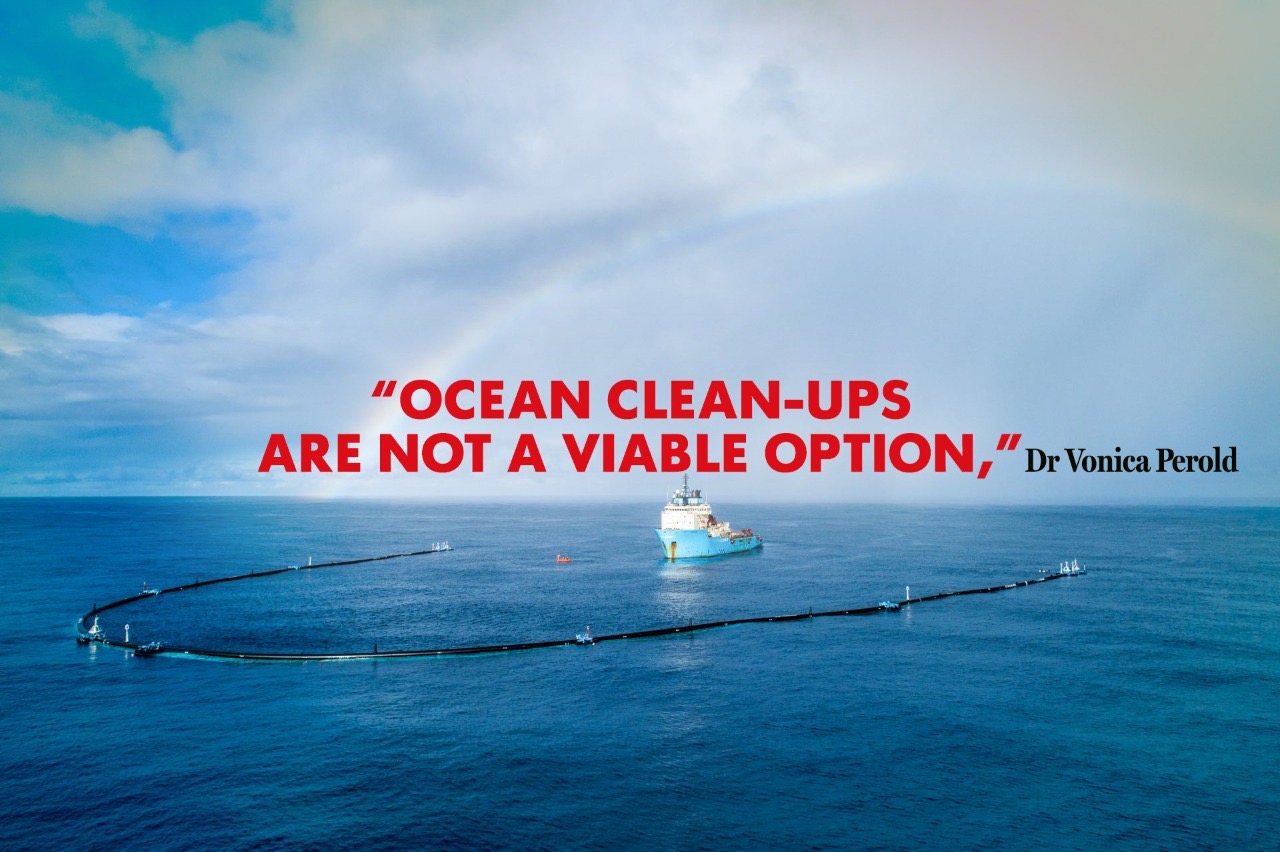 A product that was once lauded as a stroke of genius has become one of the fastest-growing environmental problems in the world.

On 27 June, a new version of the Ocean Clean Up, dubbed System 001/B, was launched with the aim of cleaning a region in the Pacific Ocean known as the Great Pacific Garbage Patch from floating plastics.

System 001/B was not the first such structure to be released in the ocean; System 001 (you see the connection), which reportedly cost around $25-million to design and build, was dropped in December 2018, its release followed by a rogue wave of both wild applause and harsh criticism from scientists and experts around the world.

But plastic wasn’t always the elephant in the littered room and the massive threat to the environment, wildlife and humanity that is today. Back in the 1950s, it was celebrated as a revolutionary material, infiltrating multiple layers of product R&D and transforming our very lifestyles.

As Dr Delphine Thibault, associate professor in biological oceanography, explains, “We have to use plastic. There are things that are in plastic and we can’t make them otherwise”.

The word plastic, derived from the Greek plastikos, “means “pliable and easily shaped”. In the 19th century, Alexander Parkes, a British inventor, is said to have invented the first plastic, called Parkesine, made from cellulose (a substance found in plant cells) and then treated with nitric acid. Parkesine went on to win a bronze medal at the 1862 World’s Fair in London and soon replaced materials like ivory and tortoiseshell. But it was inventor Leo Hendrik Baekeland, who, in 1907, created the first-ever fully synthetic material, dubbed Bakelite, the real ancestor of today’s plastic.

Plastic started to make its way into everyday life, its production boosted by World War II because of its revolutionary properties: it is a lightweight and durable material – polycarbonate, for example, is shock-resistant and can withstand high temperatures without breaking or losing its shape.

And after the war, plastic became ubiquitous: it was used to package and protect food, to create garments, as an exfoliator in face creams, and even as a replica of haemoglobin when, in 2007, the University of Sheffield developed artificial blood made from plastic molecules with, at its centre, an iron atom, for situations where blood is needed urgently.

Humanity’s production, use and consumption of plastic rapidly became insatiable, resulting in the gigantic amount of waste we have today.

In the 1960s, scientists observed plastic debris in the oceans, and in the early 1990s, studies showed that 60-80% of the waste in the oceans was non-biodegradable plastic that would not disappear from the water’s surface, but instead would break down into minuscule particles.

Today, in-depth reports and research have raised the alarm on how plastic waste is choking the oceans, destroying marine wildlife and piling up on landfills across the planet.

In April 2018, ISS Today noted that the Western Indian Ocean’s marine and wildlife ecosystems, “which are interdependent with the health, food security and national economies of over 200 million people,” are polluted with tons of plastic litter; Daily Maverick columnist and Greenpeace Africa Volunteer, Elaine Mills, called a plastic spade… a monstrous plastic spade: “Plastic pollution is monstrous – and humans are the monsters”.

The Earth Day Network, which runs campaigns against plastic (especially single-use plastic) has listed many alarming facts, such as:

The World Economic Forum published an article in March 2018 explaining that:

“Every year, an estimated eight million tons of plastic end up in the ocean. A product that was once lauded as a stroke of genius has become one of the fastest growing environmental problems in the world. It can be hard to imagine how much eight million tons actually is. To put it in perspective, it’s roughly equal to the weight of the entire population of Spain and the United Kingdom.”

Countries around the world are acting against the proliferation of plastics and specifically single-use plastics.

A United Nations Environment report states that, “As of July 2018, 127 out of 192 countries reviewed (about 66%) have adopted some form of legislation to regulate plastic bags,” adding that in South Africa, legislation includes the “prohibition of the manufacture, trade and commercial distribution of domestically produced and imported plastic carrier bags and plastic flat bags, with fines provided for breach of requirements up to 10 years’ imprisonment; as well as charges to retailers for plastic bags”.

Twenty-nine countries have also passed “some type of tax on single-use plastics, either as a special environmental tax, waste disposal fees or charges, or in the form of higher excise taxes for single-use plastics,” including Benin and Lesotho, although not South Africa. Meanwhile, France is setting penalties on goods packaged with non-recycled plastic and Canada aims to ban single-use plastics by 2021.

In 2018, the Royal Statistical Society named as the year’s winner of the International Statistic, “90.5% – the proportion of plastic waste that has never been recycled.”

Yet, if you think this should be enough to make everyone worry about this man-made disaster, count on US President Donald Trump to bury the issue under a ton of garbage tweets and comments. At this year’s G20 Summit in Japan, he said:

But if plastic has become a symbol for climate change and human pollution, anthropogenic researcher Dr Vonica Perold notes that some scientists and researchers have pointed out that it might be distracting us from the real crisis.

Indeed, an article published in Marine Policy, by Richard Stafford and Peter JS Jones, Viewpoint – Ocean plastic pollution: A convenient but distracting truth?, noted that, “Plastic has become a focus in the media and public domains partly through the draw of simple lifestyle changes, such as reusable water bottles, and partly through the potential to provide ‘quick fix’ technological solutions to plastic pollution, such as large-scale marine clean-up operations and new ‘biodegradable’ plastic substitutes. As such, ocean plastic can provide a convenient truth that distracts us from the need for more radical changes to our behavioural, political and economic systems, addressing which will help address larger marine environmental issues, as well as the cause of plastic pollution, i.e. over-consumption.”

Perold adds that radical changes to our behavioural, political and economic systems are undeniably necessary.

In the final episode of On the Edge of Change, back on land, we talk to Minister of Forestry and Fisheries and Environmental Affairs Barbara Creecy, former Irish president Mary Robinson, former Cosatu general secretary Jay Naidoo and Our Burning Planet senior investigator Kevin Bloom about the story of a generation, of humanity and about what happens next:

Are we approaching the end of the Age of the Human? ML

The miniseries On the Edge of Change will be published every Wednesday on Maverick Life and Daily Maverick. To see all the videos, subscribe to our YouTube channel