We’re entangled in a plastic web that sullies our minds 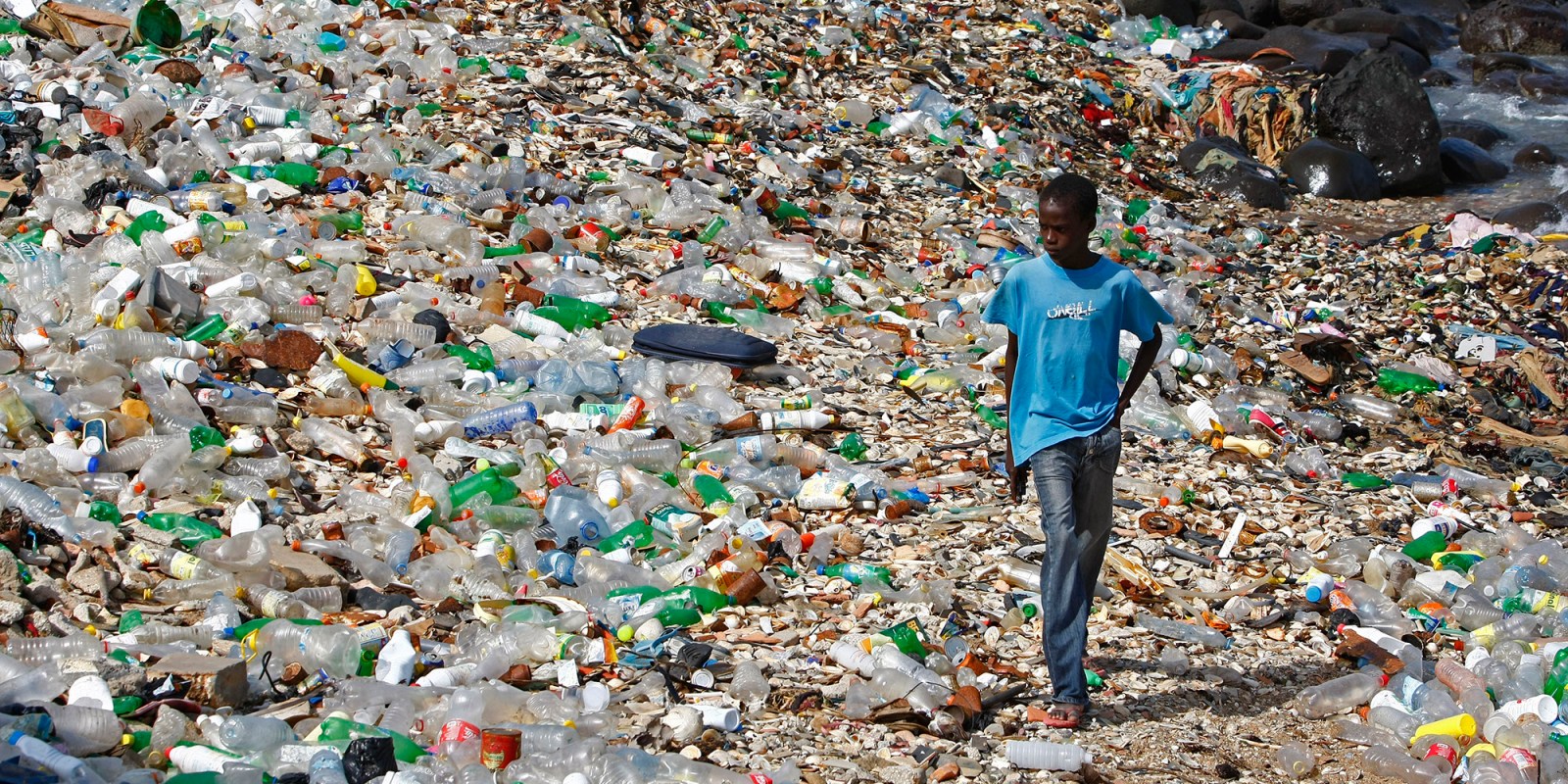 A boy from Senegal walks along a beach strewn with predominantly plastic bottles in the village of Ngor, Dakar, Senegal. (Photo: EPA / Nic Bothma)

The plastics industry is different from fossil fuel industries in one major way — its adeptness in hiding behind other industries.

At the end of my niece’s baptism ceremony in Cape Town last month, the priest encouraged us all to do more than bless the little girl with a blissful future. He invited everyone to reflect on their plastic usage and take the first step to tackle plastic pollution by pledging “no” to plastic straws. A pious, solemn and private event meant to symbolise a new start, now also has to respond to the societal failure to hold the plastics industry to account for plastic pollution. This failure emanates from the narrative that shifts responsibility to address plastic pollution on to the consumers, letting the industry go scot-free.

Plastic is a versatile and cheap material. If it weren’t, it would not have become such a vital part of our daily lives in just over half a century. But plastic pollution is now reaching a crisis level. It is estimated that one garbage truck of plastic is dumped into our oceans every minute. The plastics industry would want us to believe that all that is needed to address plastic pollution is to raise consumer awareness. It peddles this narrative because it protects its vested interests.

Unfortunately, this narrative has been hugely effective.

The use-and-throw model being fuelled by the plastics industry comes at a tremendous environmental and social cost. It remains cheap and easy to simply discard plastics after a single-use. End-of-pipe interventions that it propagates only address the symptoms. By failing to regulate plastic production, they remain inadequate to address the source of this scourge. There is as yet little indication from the plastics industry to factor in the environmental damage meted out by plastics on nature and society.

But why is it still so easy to simply use and throw plastics? Before answering that, it is important to recognise that the plastic industry shares its DNA with the fossil fuel industry. With growing pressure to reduce their carbon emissions, oil giants are diversifying big-time into plastics. As per the International Energy Agency, global fossil-fuel consumption for making plastic is expected to rise from 6% today to 20% in 2050. The people who brought us climate change are also complicit in plastic pollution.

The fossil fuel industry is well aware that regulating plastic will have implications for its future. So it should come as no surprise that the plastics industry uses the same toolkit from the disinformation playbook as adopted by other self-serving interest groups. Manufacturing uncertainty about science, cherry-picking facts, and funding extensive lobbying to influence regulation are some of their key tools. Big tobacco disputed that smoking kills, the fossil fuel industry spread scepticism about climate change and the plastics industry keeps propping up the myth of chemical recycling.

These tactics are regularly employed to discredit demands for stronger regulation. Our convenience-driven lifestyle choices are simultaneously used as a shield and a sword to fend against demands that producers take more responsibility and to attack the regulatory initiatives to establish industry accountability.

The plastics industry is different from fossil fuel industries in one major way – its adeptness in hiding behind other industries. By virtue of being consumer-facing, most often retailers end up in the direct line of the consumers’ ire. Of course, they should do much more than just replace plastic bags but they are only a cog in the plastics web in which we all are trapped. The actual producers of all things plastics, particularly plastic packaging material – in which we are wrapping ourselves, our neighbourhoods and our planet – remain untouched.

The plastics industry has successfully taken advantage of the atomised nature of our society to dilute calls for change and pacify us with the false idea that all that is needed is beach clean-ups, consumer awareness campaigns and behaviour modification. This narrative needs to be challenged.

So, while you take responsibility to sort and manage plastic waste in your homes, offices, schools, universities, playgrounds, streets and cities, it is time to ask: who is really pulling the strings of this plastic web around our lives? And who benefits from suffocating life forms in the name of preserving food, flowers and freshness?

Plastic pollution not only pollutes nature, but also pollutes our thoughts by demanding constant attention for its disposal. It distracts us from bigger challenges and has invaded our fertile imaginations that would be better put towards imagining an equitable and zero-carbon future. The plastics industry is not only responsible for choking sharks and birds but also for distracting us from realising a future that needs to work for all. It has successfully enlisted you, me and our wider society as the guilty parties to voluntarily clean up the mess it has created.

This needs to stop.

The first step would be demanding accountability. So while you, as a consumer, continue to dispose of plastic waste responsibly, as a citizen you need to start demanding regulatory accountability on the part of the plastics industry.

At the international level, regulatory accountability needs to be realised in the form of a new, legally binding agreement to tackle plastic pollution under the UN process.

As home to one of the largest plastics industries in Africa, we need to show intent, willingness and leadership to act on this issue. During the upcoming African Ministerial Conference on the Environment (AMCEN) from 11-15 November in Durban, as the host, our environment minister should provide the necessary leadership and guidance in bringing African countries together in support of such a global and legally binding agreement.

This then would be a loud and clear message for the plastics industry that needs to be translated into national and local action so that we can secure a cleaner and blissful future for our children, nephews and nieces – without it being down to the parish priest asking us to give up plastic straws. DM

We’re entangled in a plastic web that sullies our minds