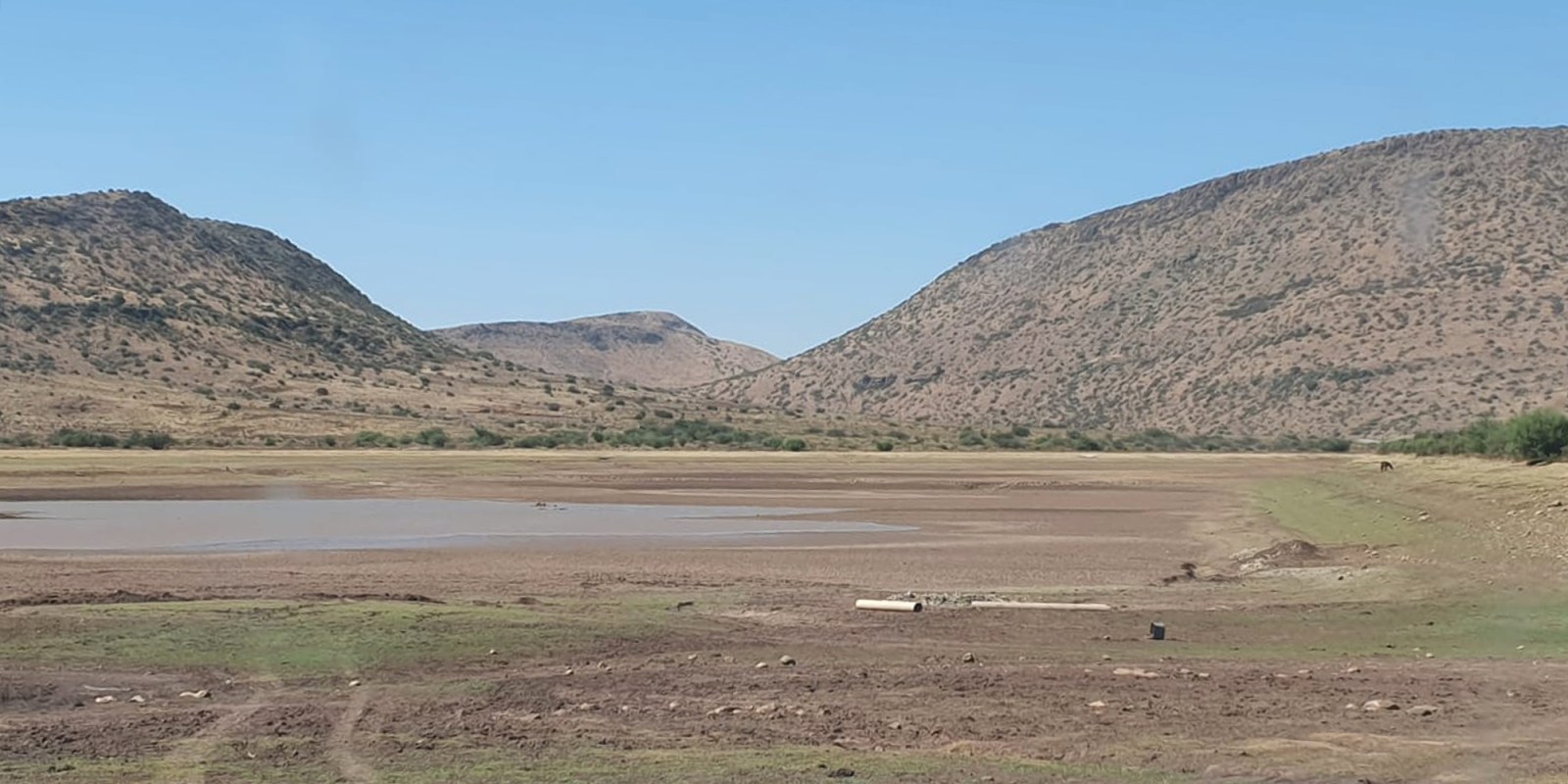 The JL de Bruin and Chiapinniklip dams in the Joe Gqabi municipality in the Eastern Cape in late 2019. (Photo: Joe Gqabi Municipality)

As the Eastern Cape treasury last week made R120m available in drought relief for the province, several towns were running out of drinking water as more dams dried up and the province’s total remaining water dropped to 50% of capacity.

On Saturday a strict warning was sent to residents in eight towns in the Eastern Cape – Aliwal North, Mount Fletcher, Lady Grey, Ugie, Barkley East, Burgersdorp and Maclear – not to drink the water supplied by the municipality without boiling it first.

In an official notice, the municipal manager for the Joe Gqabi Municipality, Zolile Williams, added that residents must add a teaspoon of bleach to every 25 litres of drinking water to make it safe.

“We can no longer guarantee the quality of the drinking water supplied by the municipality,” the notice reads.

Ten out of 13 towns in the Joe Gqabi District municipality now have level three water restrictions, meaning water is only available for a few hours every day or every second day.

The Eastern Cape Treasury late last week allocated R120-million in drought relief to the province following the publication of a notice to declare a drought disaster – as an increasing number of towns are running out of drinking water.

Spokesperson for the Department of Co-operative Governance and Traditional Affairs Mamnkeli Ngam said they were awaiting applications for drought relief.

“We have received business plans for funding to mitigate against drought from the province’s two metros,” Ngam said.

He said the money was also intended for municipalities in crisis where communities have no more drinking water. “Even my own village has not had water for a while,” Ngam said.

He said the MEC for Co-operative Governance and Traditional Affairs, Xolile Nqata, is calling on communities to assume responsibility for the water infrastructure in their towns and protect it from vandalism.

According to figures released last week by the Department of Water and Sanitation, the province’s combined dam levels have dropped to 50.7 % of available capacity, down from 64% last year. Several of the province’s big dams are empty, including the Xilinxa Dam, Beervlei Dam, Bonkolo Dam, Gcuwa Dam and Nqweba Dam.

Nelson Mandela Bay’s biggest supply dam, the Kouga Dam, is at 35%. The Buffalo City Metro implemented level two water restrictions from November 1 as its dams dropped to below 40% of capacity. This restricts residents from watering their gardens, topping up swimming pools without permission, and washing vehicles with hosepipes, among other rules.

Williams this week issued a notice to residents of Aliwal North stating that the Chiapinnisklip Dam has run dry and the JL De Bruin Dam had less than 10% of useable water left. The Aucamp Dam in the district is also running dry.

Williams stated in this notice that the town’s seven boreholes can only supply 40% of capacity. The notice asked owners of private boreholes to make their water available as a temporary measure.

Water rationing has also been implemented in Burgersdorp, Mount Fletcher, Maclear and Ugie, with residents only receiving water every second day for seven hours.

The small town of Rossouw has no water left and water is carted from Barkley East.

Other towns such as Aliwal North are experiencing water-shedding, with water only being available for a few hours every day. MC