How will the boy who escaped to Tion remember South Africa? 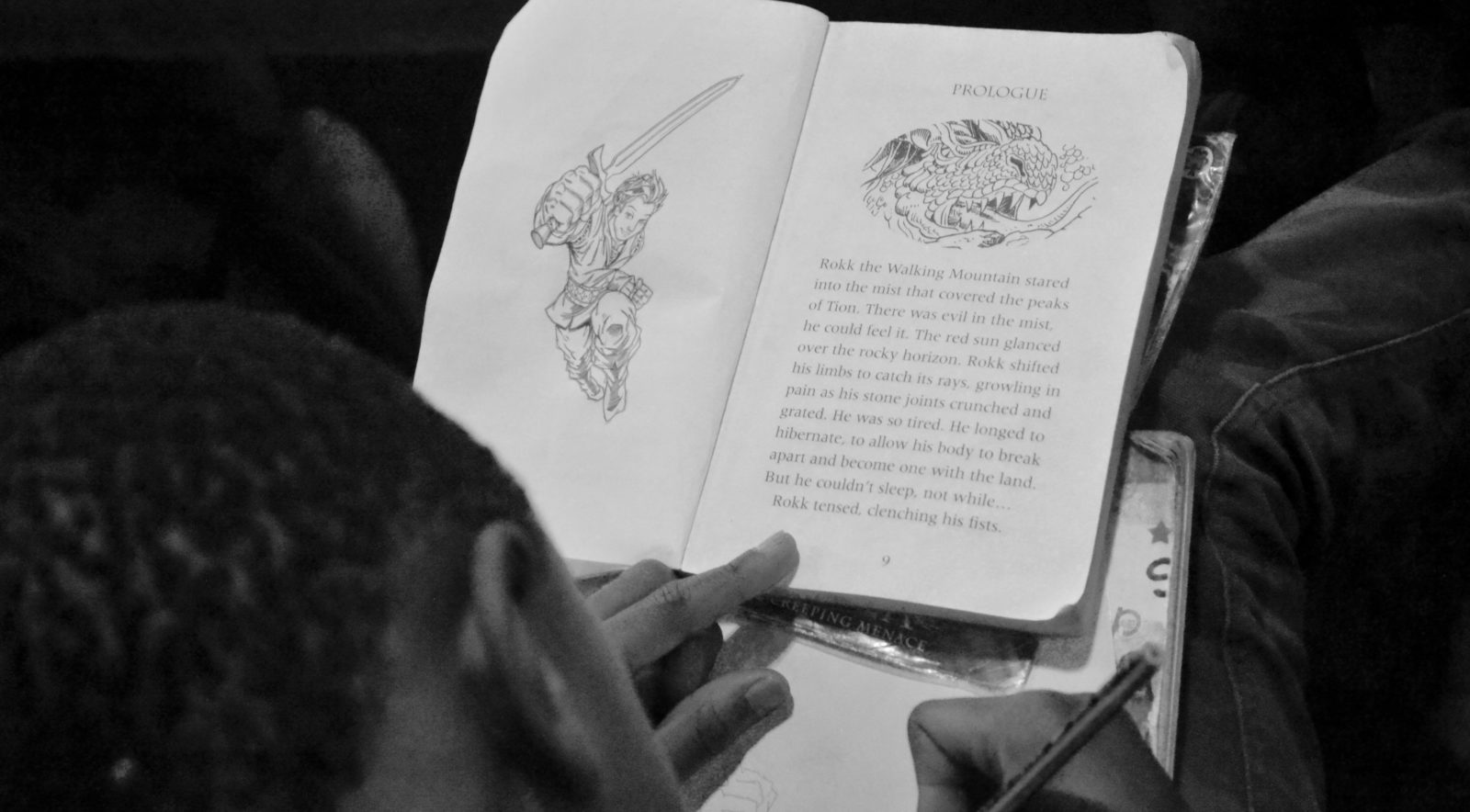 A boy reads his book outside Central Methodist Church on Thursday 30 October 2019. (Photo by Marianne Thamm)

Around him, the blankets and the bags, the weary mothers and fathers, the listless babies all piled into the hot, airless sanctuary of the Central Methodist Church in the heart of Cape Town. But the boy is buried in a book.

He is quite still. The book is balancing on his lap. An elegant finger gently holds the pages open at the “Prologue”. To the left of the text is a drawing of a boy. Perhaps the same age as the boy in the church trying to draw him with a black crayon on a blank page below. They both look about 14.

The boy in the sketch is triumphantly clutching a large sword on-high. He is smiling. The boy in the drawing is not afraid. He is a friend. From the page, his eyes meet those of the boy.

“Rokk the Walking Mountain stared into the mist that covered the peaks of Tion. There was evil in the mist. He could feel it.”

The boy and his parents have taken refuge in this church along with hundreds of others — about 300 everyone estimates — who are desperate to leave South Africa. The church is a provincial heritage site, designed by Charles Freeman, built in 1816 and kept “closely to the high, Victorian Gothic Revival with meticulous attention to detail”.

It is on the left flank of Greenmarket Square — a patch of cobbled earth that was first carved out in 1696. Today the square is surrounded by historic low-rises and described in tourist brochures as Cape Town’s “historical heart and soul”.

And on this day, after the night before, it is.

The heart and soul. The church with crowds spilling out onto the pavement, cooking, talking, waiting, drying, washing.

The keeper of this beating, beautiful heart is the Reverend Alan Storey.

“The Holy Land is not a place to visit but every place to value; there are around 7.2 billion chosen people in the world; the day will come when all guns will be turned into ploughshares,” is a quote from his Daily Maverick biography. Do read him.

Storey opened the doors of the church to the refugees on Wednesday night. It is a few hundred metres from the Waldorf arcade where displaced people had started a sit-in from 8 October outside the offices of the United Nations High Commissioner for Refugees (UNHCR). The September xenophobic attacks on foreign nationals brought them here, to the city centre.

The foreign nationals are from Burundi, from Kenya, from the DRC, from Somalia, from Pakistan. They no longer want to live in our country. They want out of here. But they can’t go home.

Home is where the war is. Home is where big men care nothing about little people, the pawns, the collateral damage of the manufactured wars, the arms dealing, the looting, the economic decay, the bullshit, the blue lights, the parades.

Make no mistake, the big men of the world include Donald Trump, Vladimir Putin, Narendra Modi, Bashar al-Assad, Jair Bolsonaro, Recep Tayyip Erdogan (insert anyone here left out). They are not only in Africa.

Refugees have asked to be repatriated to countries “that have compassion for refugees” as Carine Kavira, one of the 8 October sit-in members, pleaded last week.

It will not be the West.

The West, too, has no feeling left for “refugees” or people displaced in wars aided and abetted by the West — the UK and the US — Russia (insert anyone left out here).

Fortress Europe will not treat displaced people any differently. Papers. You need the papers. And it is the papers that Home Affairs takes so long to process, if at all.

No wonder refugees arrested during Wednesday’s violent eviction by police from the Waldorf arcade refused to give officials their names. It is all people have left. Their names and to withhold this in a hostile environment is an act of self-defence.

However, it is an impasse.

Something must be done. Some solution found. Home Affairs officials have not been to the church, Storey informed me. No one from government, in fact.

The displaced people, the people nobody wants, are now the “problem” of the Central Methodist Church. Officials and UNHCR staff can now walk to work in the mornings and not step over encamped bodies. Alan Storey says he will be taking it “one day at a time”.

Gift of the Givers’ Imtiaz Sooliman’s pleas for “a compassionate, humane and practical solution”.

He asks, “…is there any ‘third’ country that is willing to accept these stranded men, women and children? If yes, then they need to be moved as soon as all related processes are completed”.

“If no country wants to accept them, it has to be a choice of repatriation to their country of origin or remain in South Africa.”

But how will the boy remember Cyril Ramaphosa’s South Africa?

How will all the children crowded and penned into this overfull church remember this time in their lives? Their time in sunny South Africa?

They will not be able to forget the loud bangs of the day before, the acrid smoke, the cries of their mothers, the shouts of men. The rush from one place to another chased by armed men in uniforms.

A court order was obtained. This, the police seemed to think, justified stun grenades fired at close range. At least 100 people were arrested. Women beaten and dragged, babies ripped out of their arms or from their backs.

Where was the boy then?

Did he already have the book tucked somewhere safe as he ran towards Alan Storey’s church?

“The red sun glanced over the rocky horizon. Rokk shifted his limbs to catch its rays, growling in pain as his stone joints crunched and grated. He was so tired.”

Let us hope that when the boy is older Twitter will just be a wasteland where trolls and bots live in a perpetual cycle of rage, outrage and counter rage and outrage. Trump’s thumbs can rule twitter from his prison cell.

On Twitter, South Africans will be remembered for their vitriol, their anger, their insult, their xenophobia which is not xenophobia.

But here in the church, the boy is reading a book. He does not have a smartphone. He is not in that liminal space. But neither is he here.

But outside the sanctuary of the book he is here, in the real world, displaced, a refugee in a church in a strange country, squashed into a bench with everything he owns packed at his feet.

“He longed to hibernate, to allow his body to break apart and become one with the land. But he couldn’t sleep, now while…Rokk tensed. Clenching his fists.”

If the boy does not remember because his mind is in Tion with Rokk, the other children and adults will.

They will remember Alan Storey walking among the crowd, making sure all is well, members of the congregation cleaning toilets, medics in purple latex gloves listening to heartbeats, treating wounds. They will remember The Gift of the Givers’ Sooliman — the big green truck parked outside the church dispensing disposable nappies, water, bread.

Will the boy remember the book?

Will he remember the friend in the book who took him away from it all, who helped him escape from South Africa with its violence and rage to Tion, if only for a morning?

With the book on his lap, the boy does not move or look up at anyone or anything. He is oblivious to the boys jostling beside him and the woman with the camera who just captured him drawing the boy in the book.

Where will the real boy go? Who will he be? How will he remember us? DM