Private vs Public Equity: Where the cash is stashed.

The stock market indicator board is pictured in the lobby of the Johannesburg Stock Exchange (JSE) in Sandton, Johannesburg, South Africa, 14 January 2013. (Photo: EPA/KIM LUDBROOK)

Private vs Public Equity: Where the cash is stashed.

The stock market indicator board is pictured in the lobby of the Johannesburg Stock Exchange (JSE) in Sandton, Johannesburg, South Africa, 14 January 2013. (Photo: EPA/KIM LUDBROOK)

Over the last decade more capital has been raised, invested, and distributed back to private equity investors than ever before. It is outshining its listed share counterparts everywhere, all the time and by a long-shot. But not everyone is privy to a piece of this action, while the JSE is not getting much action at all.

Over the past few years, money in private hands has grown at more than double the rate of public capital globally, and experts don’t see it slowing down pretty soon.  “The flow of capital into the private markets is unprecedented,” says Duncan Lamont Head of Research and Analytics at Schroders.

According to a McKinsey Global Private Markets Review published this year and titled ‘Private Markets Come of Age’, there is almost $2- trillion in private equity capital looking for opportunities globally.

In South Africa the value of private equity investments reached a record R35.4-billion in 2018, compared with an annual average of R15.2-billion over the preceding decade, the Southern African Venture Capital and Private Equity Association (Savca) reports.

Market data shows that private investment multiples have surged, while listed securities’ p:e ratios have begun to price in the threat of a recession abroad, while local equity prices have long reflected the lack of confidence in the economy and the South African business environment.

“The market has decided that companies are clearly more valuable under private ownership than they are in the public realm,” says Lamont.  “And initial public offerings (IPOs) is a bull market game, so companies don’t see the value in coming to market at present and with easier access to alternative sources of financing they can afford to hold off on doing so for longer. “

But IPOs have been in decline for longer than that. The number of listings in the UK and US markets almost halved since the mid-1990s.

The JSE is no different as the graph from Schroders shows. 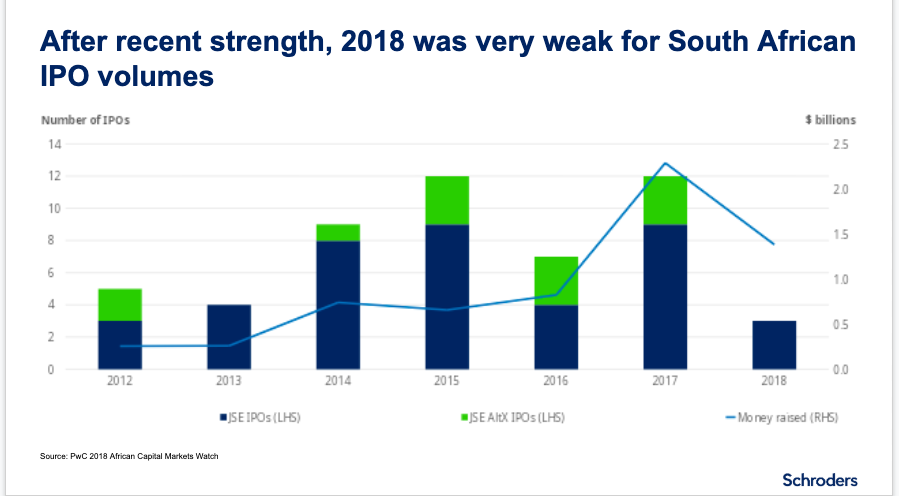 The private equity industry has grown substantially in scale and accessibility and now competes much more acutely with the public market, says Lamont. “An important development has been the ability of companies to raise sums of money privately that previously would not have been possible outside of public markets.”

“With interest rates so low abroad, debt finance has increased in attractiveness relative to equity. If a company needs capital, it makes sense to raise it where it can be done most cheaply,” he says.

For example, the average fee payable to an underwriter on an IPO is 7% of the amount raised, more than 10 times the underwriting fees on debt financing.  Interest payable on debt is also tax-deductible.

Lamont does, however, stress that, debt’s glamour may start to fade if economic stresses unexpectedly come into play.

For example, interest and exchange rates turned against Aspen and the mining houses found themselves in trouble when commodity prices crashed.

Yet, the aggressive use of debt, which provides financing and tax advantages; a determined focus on cash flow and margin improvement; and freedom from restrictive public company regulations, is how private equity managers achieve high returns.

So private equity is not without risk and does not come cheap either. But investors have been well compensated for both.

“These sustained positive rand-based returns are a testament to the resilience shown by the private equity industry during trying times.”

The report shows that the direct alpha earned by private equity relative to the JSE All share and Swix Index is 3.1% and 5%, respectively, over the three-year period.

Looking at performance data on equity of JSE listed companies, their investors are not being afforded the same courtesy at present. The market has been underperforming for close to five years now.

The costs and hassle associated with a public listing have also steadily grown, so issuers are under pressure from multiple sides.

For such expense to be justified, the benefits of a listing have to outweigh the costs, which some entities Business Maverick have spoken with, state that this is not the case.

“Going public then adds several million to a company’s cost structure in a traditional listing environment, says Etienne Nel, CEO of ZARX. He says costs and complexity are added by over-regulation where exchanges create and implement rules and regulations which have already been provided for in existing legislation or as set out in professional bodies;

“Compliance with these rules and regulations requires extensive reviews and amendments of documentation which becomes cumbersome and expensive,” he says.

Furthermore, corporate sponsors charge issuers exorbitant fees to prepare and review documentation in an inefficient and cumbersome way; while approved and licensed advisors, consultants and auditors, have to be employed to complete the documentation and further review it, for which they charge hefty fees.

These additional rules imposed by the exchange has added no additional protection or benefit to investors or issuers, he says, adding that the Steinhoff saga is case in point.

Some of the listing requirements also enforce non-sensical prescription, according to a fund manager that spoke with Business Maverick.

For example, Trans-Hex who is in the process of selling its head-office, which was classified as a category 1 transaction, which compelled the company to issue costly announcements and get auditors involved. “For a simple property sale, the red tape seems a tad excessive, and a cost such a small operation can hardly afford,” he says.

“As regulators continue to add more layers of obligation, we are reaching a point where companies increasingly question whether the benefits of public ownership are worth the burden,” adds Nel.

Given the growth of the private markets and their higher return potential vs. public markets, making private equity more accessible to retail investors will probably gain prominence.

“The appetite for risk among (primarily) retail investors is rather low, as most investors are accustomed to the more traditional investment asset classes such as listed equity, fixed income and property,” says Thabo Ncalo, Managing Partner at Savvy Partners,

The high minimums and sophistication required to manage committed capital have traditionally kept ordinary investors away from investing in PE.

Old Mutual Private Equity launched its first retail fund of funds in 2006 – enabling investors to access private equity for a minimum of R100 000.

Ncalo confirms that there is still a very small allocation to private equity or even venture capital in the Southern African region by institutional investors – typically less than 5% of their overall allocation.

From 2011, South African pension funds have been allowed to invest up to 15% into ‘alternative investments’ – a group that includes private equity funds, hedge funds and other derivative or pooled vehicles. BM