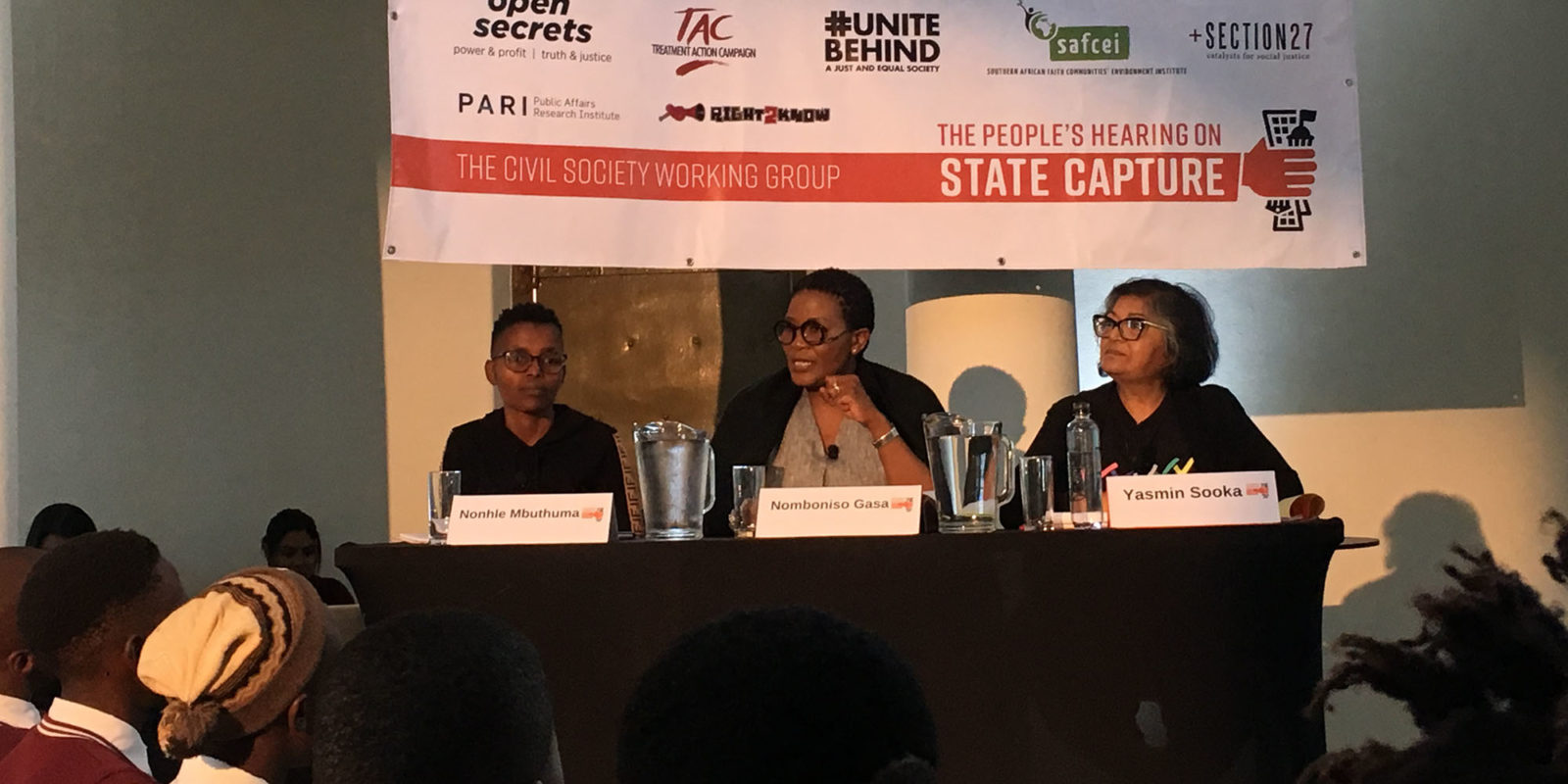 The People’s Hearing into State Capture took place at Constitution Hill’s Women’s Jail at the weekend. The hearing was civil society’s version of the State Capture commission of inquiry chaired by Justice Raymond Zondo. Civil society organisations and ordinary people gathered to share the direct impact State Capture has on their lives, from health to education.

Former president Jacob Zuma once said “corruption is a victimless crime”, a most staggering statement that rings in everyone’s ears as we watch broadcasts, read reports and hear people’s stories on how corruption has brought the country to its knees.

Walking into the Women’s Jail at Constitution Hill on Saturday morning, 12 October 2019, one was greeted by a mini civil society exhibition highlighting the urgent intervention required in Emergency Medical Services in our public healthcare system — people are dying for the lack of ambulances as a result of corruption. The exhibition set the tone for the rest of the day and the very real nature and impact of State Capture on the poorest and most vulnerable people in our society.

As I entered the gathering, it was heartening to see the elderly and learners that had made an effort to be present at the hearing — they are often the ones who bear the brunt of the failure of state institutions. One cannot help but think of the mess former minister of social development Bathabile Dlamini made with the social grants management of SASSA and CPS, or the dangerous and sometimes fatal state of rural school infrastructure because the Department of Basic Education is not implementing its norms and standards, resulting in children continuing to be taught in mud schools and falling to their deaths in illegal pit toilets, as happened to Michael Komape.

It has been the practice in South Africa that during times of turmoil and societal instability, civil society rallies together to push for change — and that is what the People’s Hearing was about. The Zondo commission is indeed a watershed moment in our country for us to collectively contribute and mobilise around, prompting this collective action that gives voice to the people of our society. The 20-plus civil society organisations gathered on Saturday provided a space for an exchange and engagement of people’s frustrations with government.

The panel was made up of political, legal and human rights activists Nomboniso Gasa, Yasmin Sooka and Nonhle Mbuthuma, who began the speaker presentations and the #DearJudgeZondo videos by giving an overview of their thoughts on State Capture and the very real impact this has had on everyday people.

Sooka said the week had been one where South Africans had achieved some wins, highlighting the Pietermaritzburg High Court judgment in which former president Jacob Zuma lost his application for corruption charges to be dropped against him in the Thales case. There was also the story of the Guptas being sanctioned by the United States as a result of corruption allegations.

“There is a brazenness with which those who loot our country continue to behave,” said Sooka. A case in point was the former mayor of eThekwini Zandile Gumede continuing to contest for the ANC provincial leadership in KwaZulu-Natal after corruption charges led to her being stripped of her mayorship.

Gasa said communities needed to feel like participants and not spectators, which has often been the case when commissions are held, to the exclusion of those who feel the effects of state failings the most. She said the Zondo commission needed to not only invite testimonies from involved people and civil society organisations, but also visit communities that have been directly affected by corruption. She called for the commission to release preliminary findings with clear recommendations for prosecutions and the implementation of accountability measures.

Sandisiwe Motsamai, the first speaker after the panel, has a gentle demeanour and a twinkle in his eye. Once he took his place at the podium he gave a most stunning account of how he was hounded out of his job as a forensic investigator because he “did it too well”.

He gave details of how he uncovered information into the Buthelezi EMS contract in the Free State and North West as well as the downfall of a senior official in North West who was found to have been looting state coffers. His story is one that, unfortunately, underlines the consequences of not colluding to pilfer from the state, as those who blow the whistle and raise the alarm often find themselves intimidated and chased out of their jobs.

It therefore becomes important that we examine the kind of societal culture that allows for criminal activities to the cost of ordinary citizens. This echoes a point made by Mbuthuma, who asked:

“Why is it that people who speak out need to be protected if we live in a democratic society?”

General Secretary of the Treatment Action Campaign Anele Yawa, as fiery as always, urged everyone to realise that the power to fight back and take back control of the state lay with the people. People should not forget that, even if it meant facing arrest or death. These comments were met with rousing applause and cheers from the crowd.

Thami Nkosi from Right2Know urged the gathering to reflect deeper into the potential for any inroads to be made by the commission if we are going to require action from state institutions that have been systematically weakened over a period of 10 years.

Talking to some of the people in attendance, it appeared that the question on most people’s minds was whether the submissions and #DearJudgeZondo campaign would make much of a difference. The more people shared their experiences, the more it seemed the obstacles were insurmountable. A young woman from Kaalfontein, on the fringes of Midrand, said people could talk and march all they wanted, but what then? She urged people to be more “entrepreneurial” in their thinking — a call that resonated with the audience.

If ordinary citizens such as Motsamai are willing to pay the price of losing their livelihoods to stand on their principles and integrity, then who are we not to aspire to similar acts of good citizenship, in whatever small or big way? Ultimately, what will define the commission of inquiry into State Capture is the speedy and effective implementation of the recommendations in response to the plight of our people.

It was clear at the end of the People’s Hearing that South Africans from all walks of life and positions are willing and ready to put their noses to the proverbial grindstone in order to put paid to endless commissions of inquiry that do not include them, yet are about them.

The significance of the venue of these hearings is itself not lost on us, as Constitution Hill has been a site of the struggle for inclusion, and a poignant representation of the people and their power. MC

Zukiswa Pikoli is a journalist at Maverick Citizen. She was previously a communications officer at SECTION27.