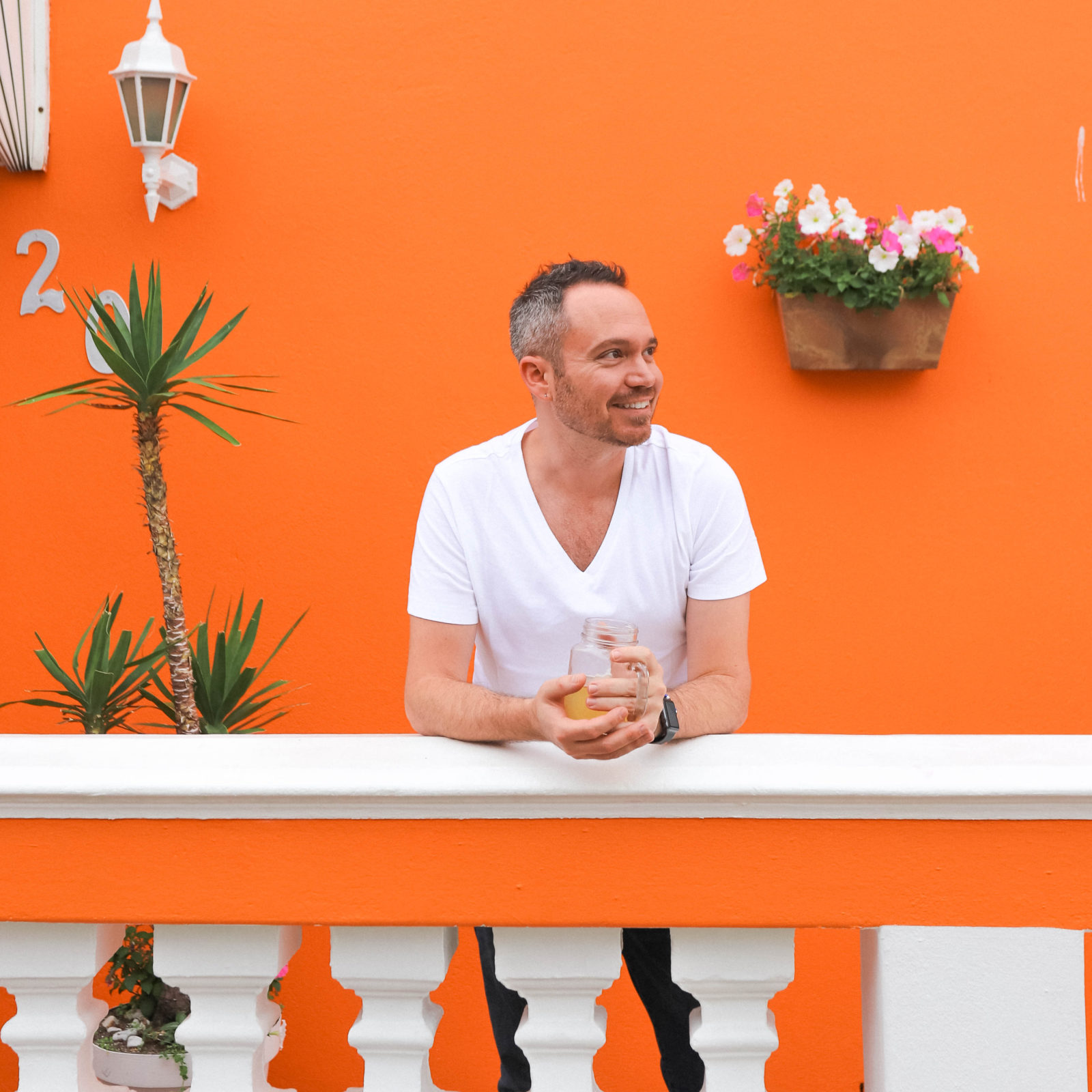 I have to confess to being a bit of an Instagram stalker and there are a handful of people that I “see” every day and Garth Tavares – aka Cape Town Vegan – is one of those people.

It’s not that I’m properly vegan but lots of people are, including my two sons. It’s Garth’s instastories that I’m drawn to where he shares moments from his life – kitchen disaster tales and all.

Garth is real about sharing his vegan life on Instagram and says: “I have no desire or passion to create ‘beautiful’ curated content that is essentially unachievable or unrealistic. My life is chaotic most days, like the majority of us. It’s on that premise that I want people to know that if I can make veganism work in my life, anyone can.”

Seeing him give a talk at a zero-waste vegan market confirmed for me what I’d thought all along: Garth is a really nice guy. Addressing the audience of 60 or so people I can see he’s a pro at public speaking. He’s humorous and relaxed and that makes sense because his nine to five job is lecturing drama students.

“I have a crazy life that consists of very many unrelated jobs and hobbies,” explains Garth. “My ‘full-time’ job (which I can’t call a job because it’s my passion) is that of a Musical Theatre Lecturer at the Waterfront Theatre School.”

In addition, Garth offers private vocal coaching and piano lessons, plays weekly gigs as a jazz/lounge pianist and also gets employed as an audition pianist.

I’m curious to know why he became a vegan.

“I simply woke up and went off red meat, assuming it was my body’s way of saying, ‘Take a break pal!’. Two weeks later the thought of eating chicken repulsed me, and next was fish. It wasn’t long before the smell of eggs put me off too.

“I can only put this down to some sort of shift in consciousness because it was at that point that I started investigating what it meant to live a vegan lifestyle and was horrified when I discovered what I had been doing to myself, the animals that I said I ‘loved’ and the planet. I believe it (more than anything) shifted my perspective of the world immensely and really challenged my preconceived notions of what ‘food’ was.

“I share a lot of information on my platform, which could make me look like some sort of ‘hub’ of vegan knowledge, but really: veganism is simple for me: it has integrated into my life seamlessly. What I’m really good at is admin and collating information. I’ve therefore used that skill to share my passion for good food and lifestyle tips for the ‘everyman’.

“I often use humour and always use truth [or authenticity] to convey that message. This sometimes includes meals that taste great but photograph terribly, rude language [if the moment permits], and self-deprecating humour.

“We all have these days where life doesn’t run smoothly: and that’s what I ‘sell’ on my platform: being a perfectly imperfect vegan.”

I think it’s this authenticity that drew me to Garth, plus both sons are vegan and Garth eats out a lot so it’s always good to keep tabs on what’s new on the vegan scene in Cape Town.

When I ask him to name his top five vegan restaurants in Cape Town he neatly sidesteps the question and says: “This is a tough question to ask because I have so many. I actually wrote a “Top five” list on my blog [which changes often!], because I have top fives in categories.

“What I will say is that for consistency I enjoy Plant in the city centre as well as Royale eatery for burgers. But I love most of the places that offer vegan options, so it’s unfair to ask me to choose! At home, when I am feeling sad, I make myself a giant bowl of carbonara pasta, which I devour in one sitting, and then feel sad that I ate so much.”

You can also rely on Garth to discover vegan cafes further out of town on weekend breaks.

“My partner [who some people know as ’Bae on my platform] and I like to get out of Cape Town for moments to breathe. We recently spent a weekend in the Elgin valley where we discovered plant-based Her Harvest.”

I read Garth’s review of Clare Kuiper’s vegan restaurant, Her Harvest, and now I’m imagining a weekend in Elgin staying in a caravan at Old Mac Daddy and eating breakfast and lunch at Her Harvest.

Garth wrote: “The first thing that would spring to mind when thinking about the Elgin valley is its abundance of apple and pear orchards and smattering of wine farms. During a recent weekend away I was thrilled to discover that it also boasts one of the best plant-based eateries in the Western Cape. So good in fact, that we went back the next day!

“Her Harvest is a very special place with simple, delicious food that is prepared with care and attention by people that want to make a difference.”

Her Harvest has been added to my weekend mini-break wish list.

What’s next for Garth/Cape Town Vegan? “I’m taking a slight sabbatical next year to musically direct a Pieter Toerien production, after which I will take a group on a tour of London’s theatre district for a few weeks [an event I am fortunate enough to do every year].

“I also run the social media for two companies [which is an every-day-of-the-week task] and when I occasionally get a moment to breathe, I like travelling.”

When I ask Garth what people would be surprised to know about him he laughs and says: “People who follow my Cape Town Vegan platform know that I have an obsession with anything related to the My Little Pony franchise. I am on a quest to find a South African ‘My Little Pony’ figurine: they actually exist and are incredibly rare (from the Eighties).

“I am incredibly shy and I share very little of my life on social media. I think people are under the impression [because I post all the time] that they know what goes on in my life: tip of the iceberg!

“I can’t sleep with socks on. Literally.”