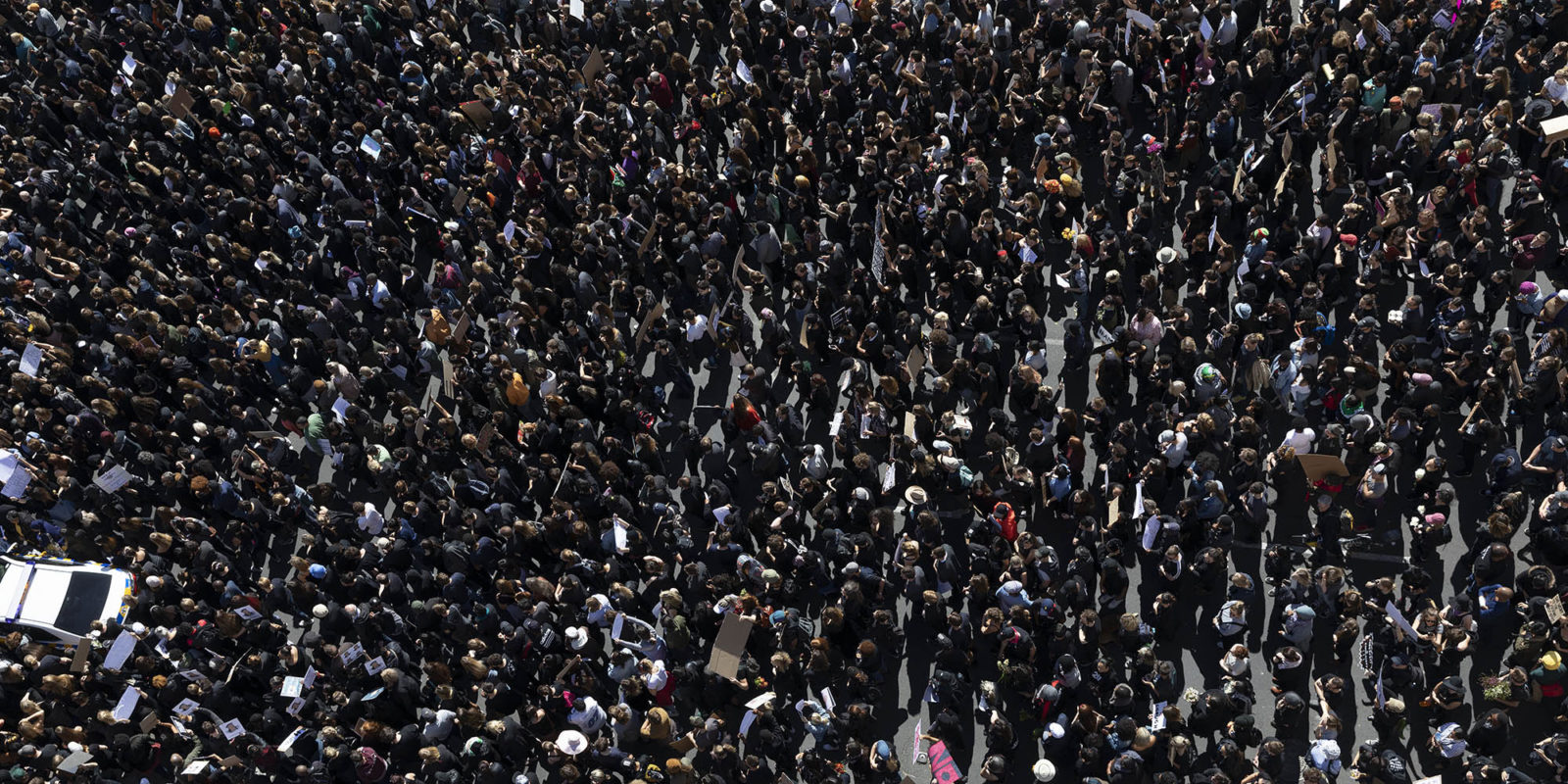 Part of the crowd of tens of thousands who protested outside Parliament in Cape Town in September against gender-based violence after a week of brutal murders of young South African women. (Poto: EPA-EFE / Nic Bothma)

This year the Commission for Gender Equality released a report on gender and sexual harassment policies in four higher education institutions and the Department of Higher Education, Science and Technology. While policies are being drafted to make campuses more proactive, it is apparent that students often do not feel comfortable reporting sexual harassment.

With the scourge of gender-based violence and the protests over the past month, Daily Maverick followed up about the measures the University of Mpumalanga, Sol Plaatjie University, Nelson Mandela University, the University of Zululand and the Department of Higher Education, Science and Technology have taken since the Commission for Gender Equality released a report this year outlining recommendations regarding their sexual harassment policies.

The Department of Higher Education is drafting a policy framework that all higher education institutions will need to adopt. The report recommended the development of “policies to deal with the scourge of gender-based violence within institutions of higher learning rather than outsourcing services to Higher Education HIV/AIDS Programme (HEAIDS)”. No deadlines were stipulated.

Providing an update since the report was released, department spokesperson Ishmael Mnisi said the department was finalising the policy framework to address gender-based violence in higher education.

This policy applies to all institutions including universities, TVET colleges, community education and training colleges (CETs) and to all students and staff members of these institutions.

This policy aims to “improve victim/survivor support and assistance services including procedures for reporting, investigation and resolution of complaints; comprehensive, specialised support and other assistance of victims and, where possible, perpetrators” and to develop “an integrated model for managing sexual harassment and gender-based violence at higher education institutions with specific emphasis on policy interventions and the creation of an enabling environment to address gender-based violence in higher education institutions,” said Mnisi.

This policy framework will require higher education institutions to submit quarterly and yearly reports to the department on the programmes developed to improve safety and reduce gender-based violence, the number of cases reported, including those where counselling/information only was sought, and budget and expenditure for addressing GBV.

Once the draft is complete, further consultation will take place with the Council for Higher Education (CHE).

The department aims to have this policy finalised by March 2020. The implementation date will be published in the Government Gazette.

In the Commission for Gender Equality’s report on gender transformation, Nelson Mandela University in the Eastern Cape was the only university out of the four that appeared before the commission in 2018/2019 where women were in the majority in the academic and senior staff.

NMU’s sexual harassment policy was described as “progressive and inclusive”.

However, that does not mean the campus is incident-free.

The commission noted that people living with disabilities were under-represented and recommended that the university needed to implement strategies to hire more people living with disabilities. The commission also recommended that the university review its policies biannually to ensure it complies with the changing legal landscape and the needs of staff and students.

Kwanda Jakalas, a former SRC member and a former chairperson of the DA Students Organisation, says most reported cases involved sexual harassment among students, often at residences or events.

“When I served on the university’s disciplinary committee [in 2018], I remember that there were quite a number of sexual harassment cases. Those cases rarely involved lecturers harassing students, it was often students harassing students,” Jakalas told Daily Maverick.

“The university has had campaigns to educate students on the support they can get when they’ve been harassed and where to go to report, so I commend the university for always being willing to open up and listen to students.”

Jakalas says students have shared with him their reluctance to report their cases “because they’re afraid to come out as victims. I think that’s what the university should focus on now, having campaigns that will empower victims so that they can report their cases.”

The university did not reply to requests for comment via email.

Sol Plaatjie University in the Northern Cape, which opened its doors in 2014, was criticised in the report for its sexual harassment policy which is applicable only to staff members, not students.

“The policy being referred to was formulated as part of our suite of human resource policies which do not include students, as they are not staff members employed by the university. A sexual harassment policy pertaining to students falls under the suite of policies relating to student conduct and behaviour,” said Sol Plaatjie University spokesperson Kashini Maestry.

This means that academic staff are bound by different policies than students, who are bound by the student code of conduct.

The code of conduct for students stipulates that “a student shall not perform or attempt to perform or incite, instigate, command, [or] advocate, any other person [to]” assault or threaten anyone.

The Sol Plaatje University sexual harassment policy, which is only applicable for academic staff, is under review. This, after the recommendations that were made by the Commission for Gender Equality.

“If the disciplinary hearing finds the perpetrator guilty then he is expelled,” said Nomathamsanqa Qiza, the deputy-president of the SRC.

Students at Sol Plaatjie University were reluctant to report their cases because they were worried about the repercussions of disrupting the perpetrator’s studies. Often, the perpetrator is a partner.

“The female students are often scared to open cases [with the police] because if the male students are found guilty they’re expelled. In that case, we send them [the victim] to a psychologist,” said Qiza.

For the University of Mpumalanga (UMP), which opened in 2014, the commission recommended it needed to implement measures to educate students about gender-based violence through dialogue, workshops or campaigns to sensitise them on policies about sexual harassment, and the disciplinary code of staff and students.

In UMP’s vice-chancellor Thoko Mayekiso’s written response to the commission’s recommendations, she informed them that a number of measures had been taken to inform the university community about gender-based violence.

In May, the university held a workshop on sexual harassment in the workplace.

A month later it hosted an interim gender forum. “Staff members who work closely with students; student leaders and student societies that work closely with gender-based violence from both campuses attended the information sharing session where different organisations were invited. The organisations provided the knowledge base and practical steps to aid.”

Thuso Tshiloane, an SRC member, said the biggest issue was dealing with first-year students who were often unfamiliar with the university’s policies and code of conduct.

“When students come here in their first year, they’re all coming from different backgrounds and some are coming from backgrounds where violence is okay,” Tshiloane told Daily Maverick.

Tshiloane said most of the cases reported involved male students fighting with each other.

“We have a big problem with male-to-male violence which is higher than gender-based violence cases reported.”

This year, five cases have been reported, which were mostly male students fighting with each other.

“First-year students are new to universities and still have that mentality that they have to fight each other – that’s why we need to educate them about the policies at the university,” said Tshiloane.

The university has initiatives like Sisterhood and Boys to Men which are groups for students to come together to discuss gender-based violence which was formed this year.

Tshiloane said “there are other cases [of violence] which are not being reported but when we tell the student to report it, they tell us ‘no, it was a misunderstanding’. That makes it difficult to intervene, so we can only encourage them to see a counsellor.”

Covid-19: Just another opportunity for a political brawl

Book Excerpt: Outbreaks and Epidemics, the first book to cover the coronavirus