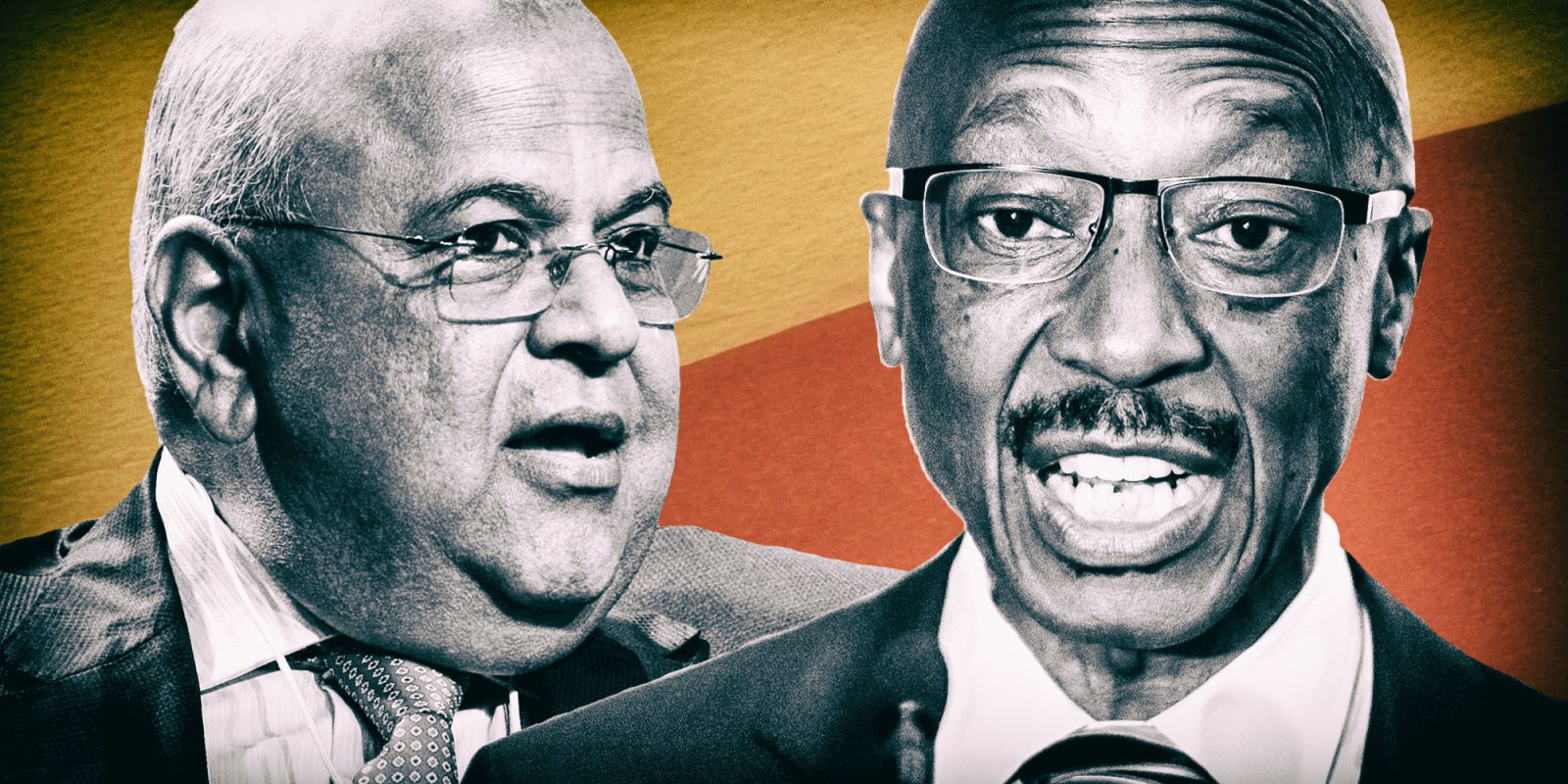 The Minister of Public Enterprises is opposing former tax boss Tom Moyane’s bid to cross-examine him at the State Capture Inquiry. The chairperson could grant the application, if he concludes Gordhan accused Moyane of being motivated by a State Capture agenda when he filed a criminal complaint against Gordhan in 2016.

The broil between former tax boss Tom Moyane and the Minister of Public Enterprises, Pravin Gordhan, continued at the Commission of Inquiry Into Allegations of State Capture, Corruption and Fraud on Wednesday.

At issue is a criminal complaint Moyane filed in early 2016 relating to Gordhan’s involvement in the High Risk Investigations Unit (HRIU) at the South African Revenue Service (SARS). Through a series of Sunday Times articles, for which the paper’s current editor has now apologised, the HRIU has became known as a “rogue unit” with sinister connotations.

When Moyane lodged his complaint in 2016, Gordhan was serving as minister of finance for a second time. Gordhan soon received a list of 27 questions from the Hawks regarding his role in the HRIU. Incumbent National Director of Public Prosecutions (NDPP) Shaun Abrahams instituted criminal charges against Gordhan which were later withdrawn.

On 16 April 2019 Justice Zondo postponed any decision on cross-examination in relation to a question of Moyane’s motive and/or malice in filing the criminal complaint against Gordhan.

“Other than that issue […] there is no other issue on which the applicant should be granted cross-examination,” said Justice Zondo.

This Wednesday, counsel stood to address Moyane’s application to cross-examine Gordhan on this singular point, but the debate soon turned to themes previously traversed, which were addressed in Justice Zondo’s April ruling.

Justice Zondo expressed concern at undoing his prior ruling. He indicated that if he were to grant cross-examination it would be limited to a narrow issue.

“If Mr Gordhan had stopped on talk about malice and said nothing about State Capture, maybe it would have been easy to dismiss the application,” he said.

Since Gordhan mentioned State Capture in relation to Moyane’s criminal complaint of 2016 and Moyane’s complaint related to Gordhan’s role in the HRIU, all three matters are now entangled. This presents Justice Zondo with an arguable dilemma. If he grants cross-examination on the question of motive and malice, he may open the sluice gates.

He was bold in asserting five independent reports that found the “rogue unit” to exist, including those authored by advocate Musi Sikhakhane SC, KPMG, retired Judge Frank Kroon et. al., the Inspector General of Intelligence, and the Public Protector.

“Minister Gordhan agrees that no one is beyond scrutiny and he has nothing to hide, and if it will assist the commission and if you determine that it is necessary and in the interests of the function (of the) Commission that he return to be cross-examined, then he will obviously make himself available,” said advocate Michelle le Roux.

Gordhan’s submissions, said Le Roux, have been consistent in that Gordhan indicated he does not know what Moyane was thinking when he filed a criminal complaint against him on the eve of the Budget, after which the Hawks asked Gordhan 27 questions and the incumbent NDPP laid criminal charges.

“He understood that former president (Jacob) Zuma seemed to regret his reappointment, but understood that he couldn’t be fired and so there was a campaign against him,” said Le Roux.

“Minister Gordhan’s belief is that part of that campaign was law-enforcement agencies — the Hawks with their 27 questions, and then the NPA with its charges brought and then withdrawn — used the criminal complaint by Mr Moyane in that campaign,” said Le Roux.

Le Roux called the reports cited by Mpofu “discredited”, but in the face of questions from Justice Zondo withdrew the comment in relation to the Public Protector’s reports, which are the subject of an ongoing judicial review.

“The Public Protector reports are on review, and they haven’t yet been determined, but there is a serious legal challenge to all of them,” she said.

Le Roux submitted that KPMG withdrew its report, while Kroon disavowed his evidence and apologised to members of the HRIU. Should Justice Zondo allow Moyane to cross-examine Gordhan, she predicted it would facilitate “one more repetition of a narrative that is furthering a political campaign” targeting her client.

Justice Zondo referred to his April ruling on cross-examination and noted that in certain parts of Gordhan’s affidavit “he was saying, you know, the bringing of criminal charges, the prosecution seems to have been part of an agenda” which Justice Zondo deemed to be a State Capture agenda.

Justice Zondo could not determine if Gordhan had accused Moyane of being a State Capturer, and of being motivated by that cause, when Moyane had filed a criminal complaint against him.

For Moyane’s counsel, Mpofu, the debate was moot.

“Mr Gordhan says, ‘To use the words of the chairperson I, therefore, do mean that Mr Moyane was motivated wholly or in part and sought to advance the objectives of State Capture.’ And his counsel now says, no, he never said that, the only thing he ever said was that he was just the trigger and then others took over. I mean, that is just a lie,” argued Mpofu.

“At the very least one can say there is confusion about what Mr Gordhan is saying about Mr Moyane. That is being a little generous, I think, but the purpose of cross-examination is not only to challenge but also to clarify. Of course, that same object may be achieved by a statement of clarification,” said Pretorius.

“I say there is no confusion. It’s very clear what Mr Gordhan is saying and all that he must do is to justify it or not justify it or withdraw it, but under cross-examination.” Mpofu even threatened to lay a case of perjury should Justice Zondo decide to seek another clarificatory affidavit from Gordhan.

“There’s nobody who can stand here now and say he’s not saying what he said and as I say, if indeed that is so he’s guilty of perjury. Actually, if he comes here with another affidavit that says the opposite of this, we will go and lay criminal charges of perjury because he will be lying.”

Throwing down the gauntlet

Referring to Moyane’s tenure at SARS, the Department of Correctional Services when it held contracts with Bosasa, and his alleged role in the Waterkloof landing, Le Roux said:

“The commission absolutely needs to hear more about how Mr Moyane was or was not part of the State Capture project, but it must hear it from Mr Moyane.”

“It’s time for Mr Moyane to tell you and tell the country why what he did at SARS was not part of State Capture,” said Le Roux.

She claimed Moyane sought to repeat “the same arguments, the same themes, the old narratives that are being used outside of this room to try and discredit my client in a political campaign — and that’s Public Protector reports and IGI reports and the like.”

On Thursday, 3 October 2019 proceedings will begin at 2pm.

Former Free State Head of Agriculture and Rural Development Peter Thabethe is set to return. He will continue testifying on the Vrede Dairy Project. DM