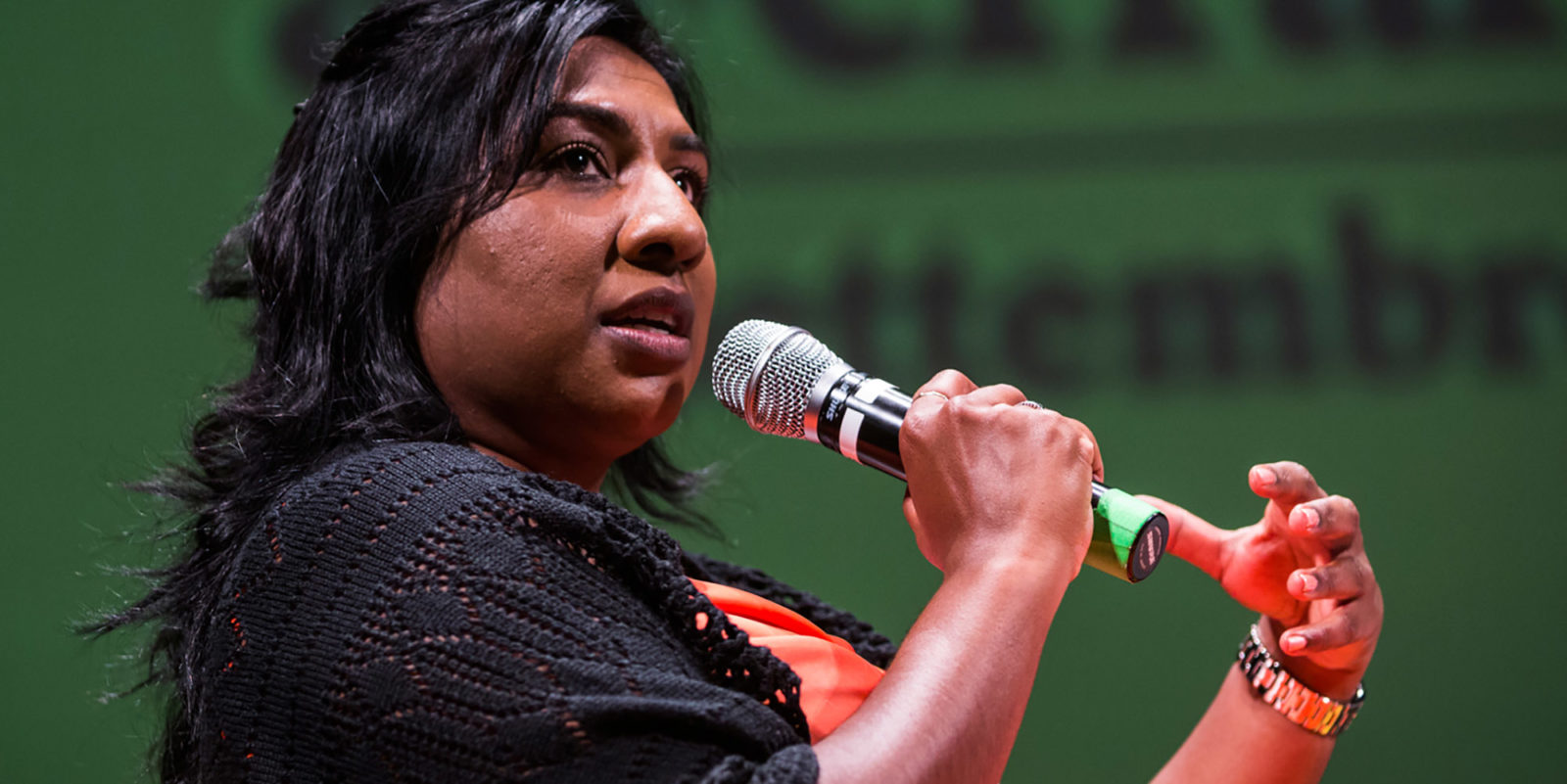 Suspended Sunday Times associate editor of analysis and former Daily Maverick associate editor Ranjeni Munusamy has slammed claims she was “effectively” a spook. In her corner are media law expert attorney Dario Milo and prominent advocate Dumisa Ntsebeza. Munusamy is pressing to urgently cross-examine Colonel Kobus Roelofse, who implicated her in his evidence last week. She claims an 11-year-old car payment of over R143,000 is “entirely innocuous” despite Roelofse’s allegations the money came from a covert slush fund.

Ranjeni Munusamy, who is currently on special leave from her senior job at Tiso Blackstar Group’s Sunday Times, has written to the Commission of Inquiry Into Allegations of State Capture, Corruption and Fraud.

“I deny having been involved in any act of corruption, bribery, fraud or money laundering,” writes Munusamy. “I deny that I wrongfully and unlawfully benefitted from state funds as part of an unlawful scheme.”

Munusamy compiled the text – a supporting affidavit – in the wake of startling testimony implicating her last week. She writes, “My view is that this is an attempt to destroy my credibility to ensure that I will not be taken seriously as a journalist. I will not let this intimidate me.”

In her submission, signed yesterday, Munusamy slams Hawks investigator Colonel Kobus Roelofse’s evidence implicating her as “effectively an agent” and asserts any such claim is false. “I am horrified by the allegation,” she says.

Munusamy wants to testify herself and cross-examine Roelofse as soon as possible, provided her application is granted. She seeks to “vindicate” her reputation, dignity and prevent further harm.

Munusamy refers to a final balloon payment of R143,621.78 on her personal car – a silver BMW convertible – made in June 2008. The amount seems to have made several stops, including in the account of Atlantis Motors, a Centurion-based car dealership now steeped in controversy.

“I had no knowledge of how it came about that details of a personal transaction of mine were on the books of Atlantic Motors,” she states.

Last week Roelofse testified that the amount “was paid from the Atlantis Motors business account to Wesbank vehicle finance account in the settlement agreement of the vehicle in the name of Ms Ranjeni Munusamy. As far as I know, she is a journalist.”

A day prior Roelofse spoke more generally of journalists allegedly receiving funds from Crime Intelligence (CI) operatives in order to influence their reporting, something Munusamy highlighted as context.

According to Roelofse’s evidence, Munusamy’s luxury car payment was unearthed while he was investigating suspected corruption between members of the CI division of the police and Atlantis Motors.

Reflecting Roelofse’s evidence, Rebecca Davis reported for Daily Maverick, “Between 2009 and 2012, vehicles to the value of R69-million were bought by crime intelligence from one company, Atlantis Motors in Centurion.”

Roelofse relayed information he testified was provided to him by Atlantis Motor’s main dealer, Jan Venter, on how the outstanding balance on Munusamy’s car was settled in mid-2008.

Per Roelofse, Venter was “requested to pay over an amount of money into this WesBank Vehicle Finance Access Account” and about three months later debited a BARUT account at Atlantis Motors.

On Thursday, 19 September 2019 he continued, “At the time when I interviewed Mr Venter he, he showed me the transaction. He explained to me what happened.”

“So, effectively what it means is that the amount was covered by the account which is funded through the sale of vehicles to the SSA, to Crime Intelligence.”

“The above allegations are extremely serious and have the potential to destroy my reputation as a journalist,” Munusamy wrote in her supporting statement, after referring to extracts from Roelofse’s testimony.

Munusamy has furnished her own version of events in her bid to cross-examine Roelofse. She emphasises that the car payment occurred “when [she] was not a journalist” more than a decade ago and, in any case, she deems it “innocuous” on several grounds.

Here, in summary, is her version:

Munusamy details her family’s close relationship with the Abdool family and describes “successful fruit and vegetable wholesaler” Basheer Ahmed Abdool much like a brother: “We would help each other financially and otherwise over many years and we are still very close,” she says.

After a car crash in 2003, Munusamy obtained Abdool’s advice regarding buying a new car. Through a mutual friend, they arranged the purchase of a second-hand BMW convertible with a finance plan from WesBank.

The car was registered in Munusamy’s name and Abdool would sometimes drive it.

In 2007, Munusamy bought a townhouse. Due to the financial pressure of paying the bond while running her own business, she chose to pay off her car. She discussed this with Abdool.

“Upon hearing of my financial predicament Basheer told me not to worry and that he would pay off the outstanding debt on the car himself,” writes Munusamy. “At his request I provided him with the account details for the WesBank vehicle repayments.”

The understanding, says Munusamy, was Abdool would settle the outstanding amount on the car and she received a bank statement to that effect in early May 2008.

For more than a decade afterwards, the two reportedly did not discuss the final payment on the BMW further. Then, Roelofse testified at the inquiry last week. “When I revisited the payment of the settlement amount with Basheer last week, he confirmed that he paid the settlement,” states Munusamy.

Munusamy reports that she has since heard from Abdool that he intended to buy a Nissan from Atlantic Motors around the time the final BMW balloon payment was settled.

She reports that Abdool has now told her he paid “approximately R150,000 in cash” for the Nissan and was set to collect in on 9 May 2008.

However, she writes, considering her “financial predicament” on the same day Abdool cancelled the Nissan sale and instructed Atlantic Motors to transfer the funds into the WesBank account for the BMW.

“He provided the dealership with the details of this account and my full name,” writes Munusamy, adding the balance of about R6,000 was withheld as a handling fee.

“He says in his affidavit he knows nothing about the allegations that Crime Intelligence was involved at Atlantic Motors.”

Munusamy has highlighted the scrutiny she has faced since Roelofse aired his claims against her last week. This includes “scathing media reports” and abuse on social media. Examples are annexed to her supporting statement to the State Capture Inquiry.

Claims with a cost

“We adhere to the doctrine of presumption of innocence until proven guilty and the principles of natural justice that include hearing both sides of the story,” read the statement. “However, we have granted her special leave considering the gravity of these allegations.”

“We will closely follow Munusamy’s co’operation with the Zondo commission and will await the outcome of Tiso Blackstar’s internal investigation,” read the SANEF statement.

In her supporting statement, Munusamy presses for an opportunity to urgently table her version and counter Roelofse’s claims. She motivates to testify in a matter of weeks and not months, because of the impact on her career and work.

Munusamy indicates that she “consulted for a few days” with an attorney acting for the Sunday Times, Willem de Klerk.

She says on Monday, 16 September 2019 De Klerk reported the newspapers’ holding company, Tiso Blackstar Group, “had terminated his engagement agreement over the weekend.”

Since then, she has consulted with attorney Dario Milo and Advocate Dumisa Ntsebeza SC. The choice of Ntsebeza is interesting, considering his submissions at the Farlam Commission investigating Marikana, an event Munusamy cites in her supporting statement.

She records being contacted by the Hawks’ Roelofse in 2014 who stated he was investigating something about her car and wanted to meet.

Munusamy writes, “At the time, I was suspicious that the enquiry by the policeman was related to the fact that Daily Maverick had been publishing a number of stories critical of the police at that time. This included, inter alia, stories surrounding the Marikana Massacre and the Farlam Commission, and the police’s role in the Nkandla upgrades. I was concerned that this may have been some form of intimidation.”

She continues, saying she contacted her attorney and Roelofse showed apparent surprise on learning she intended to bring her lawyer to the planned meeting. “He made no further contact with me,” writes Munusamy.

In camera, or not quite

In her submission, Munusamy pens her retort to Roelofse’s claims, which were backed up by the input of his former colleague, Colonel Dhanajaya Naidoo.

Naidoo has been in witness protection for several years, thus he is testifying in camera (which, somewhat confusingly, is Latin for the opposite of what it sounds like; the term refers to evidence typically given in chambers, excluding the media and public). Munusamy intends to apply to cross-examine him, too.

She calls Roelofse’s version (which Naidoo supports) over the BMW payment “sinister spin” and he “does not explain what the expectation would have been” in return.

“I state unequivocally: I have never been in the pay of Crime Intelligence, whether a journalist or otherwise. The suggestion that I have is preposterous. It has caused me significant distress and anguish,” writes Munusamy. DM

Jessica Bezuidenhout for Scorpio • 1 hour ago