What goes well with a rhyming couplet? 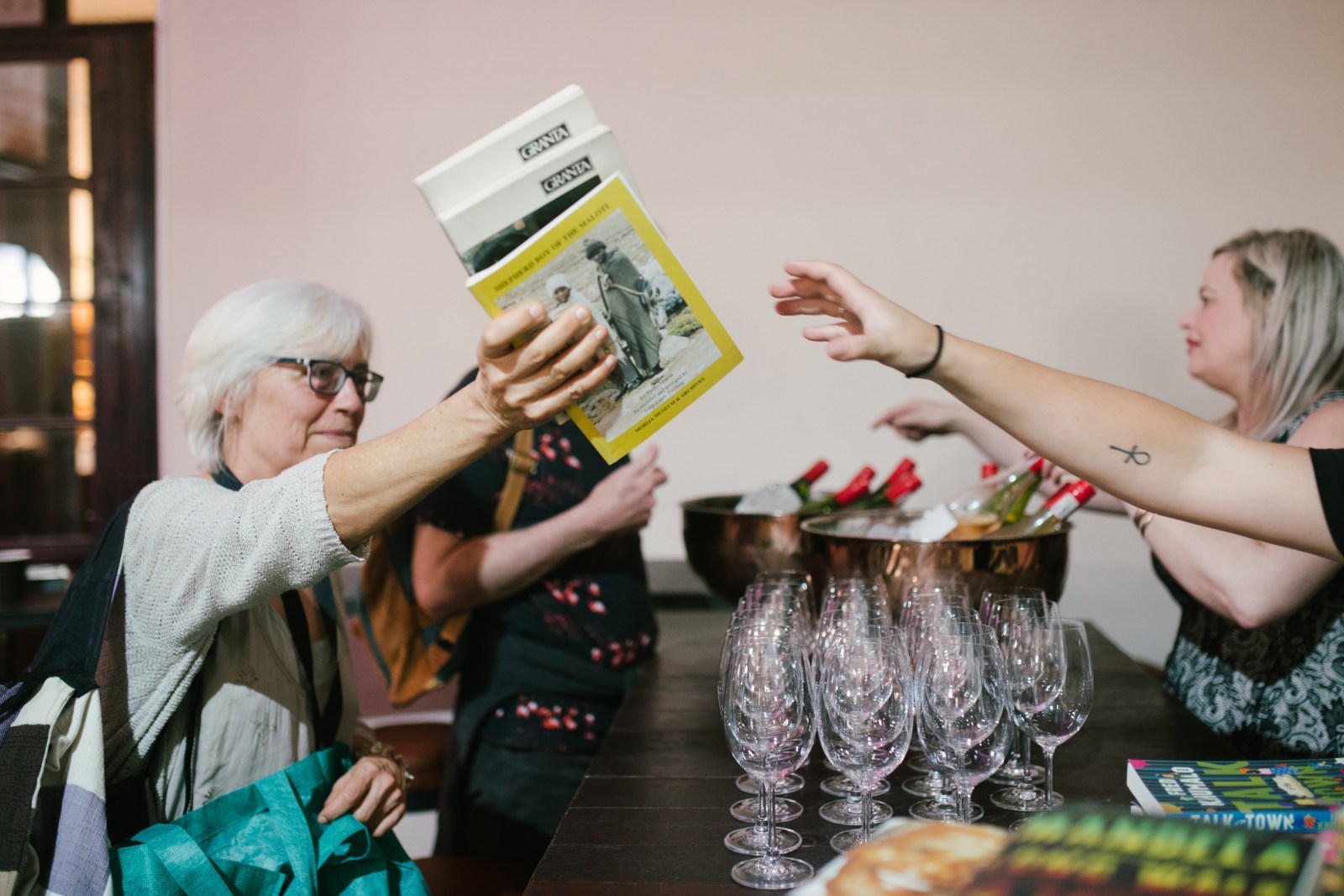 Author Dawn Garisch exchanges a book for a glass of Leopard's Leap Wine at its popular Words for Wine event. Photo: Retha Ferguson

Open Book Festival has a wonderful buzz reminiscent of the vibe of the National Arts Festival in what was Grahamstown back in the late 1990s… a full day of events lined up, time to browse, buy books and drink wine, chattering crowds in the foyer and a variety of enriching experiences.

Eating, drinking and reading are three of greatest pleasures – together or individually. The 2019 Open Book Festival in Cape Town, the ninth, held from September 4 to 8, placed its focus on food and went forth to explore this broad topic in many forms.

Some of my favourite childhood memories are of reading, and I proudly wore the bookworm title. Having something good to eat and drink with a book in my hand was the highest level of bliss.

The guava tree with its smooth white bark, in my grandparents’ back garden, had a convenient fork in its branches where it was quite comfortable to sit. I’d head up there all day with my book, and at lunchtime Granny would come out of the kitchen with a tuna mayonnaise sandwich and a glass of ginger ale, which she would hand up to me so I didn’t need to move from my perch. I don’t remember what I did about the bathroom breaks, but I’m grateful to have grown up in the time before television (which I love as well, make no mistake, and there’s lots of eating to be done in conjunction with that too).

Included in the Open Book programme were discussions about talking points such as access to food in urban spaces, and how we consume, engage with and are shaped by food, small dinners with international authors (Nicole Dennis-Benn, Carmen Maria Machado and Booker long-listed Oyinkan Braithwaite), and even a poetry and ice cream pairing.

“What goes well with a rhyming couplet?” my best friend replied when I texted her about what I was doing. She’s a poet and author. I was about to find out.

AuOral Interlude first paired poet Toni Stuart with Tapi Tapi’s Tapiwa Guzha (read about it here) – she did the words, he did the ice cream. The venue was downstairs at The Book Lounge, which is one of the happiest places on earth; you can keep your Disneyland.

Guzha’s mission at Tapi Tapi is to educate the continent about food and food culture, through responsible agriculture. He promised us there would be unusual ice creams, which we may or may not like, but at least we will have expanded our horizons.

Stuart had previously met with Guzha and tasted several ice creams. Her initial intent was to write poems based on that, but in the end she decided to use her existing works. Guzha came around with a tray of paper cups with ice cream (bompies – like a sucker on a stick) and invited us to try to guess what he had used to make them. Spoiler: no chocolate chip or raspberry swirls here.

Stuart read a poem about music, something with which she grew up. “Another soul’s art” she called it, and her reading was a haunting lyrical version of singing. It’s always exceptionally beautiful to hear an author or poet read or even perform their own writings; no one can do it better.

The dusky green sorbet had everyone stumped. The closest guess was prickly pear, and Guzha explained he had used cactus leaves, chilli (that bit was quite obvious) and nasturtium leaves.

Stuart’s second poem was called The Tenderness Of Trees, which illustrates the sweetness of love, which is not without its tartness at times. Guzha’s gelato was flavoured with tamarind – something we tend to associate with Asian and Indian cooking but it is in fact an indigenous tropical African fruit. Next up was The Temptation Of Pots, which Stuart wrote as she searched for home in many places before realising words and writing poetry are indeed her first home. The earthy, ashy ice cream had us stumped; we knew it was a nut, but what kind?

Groundnut, revealed Guzha. It’s the fifth most widely grown crop in sub-Saharan Africa behind maize, sorghum, millet and cassava. He shared his memories of peeling buckets full of them when he was a child, and how they would be roasted over an open fire.

The fourth pairing evoked thoughts of being by a river for Stuart. Her lovely What The Water Remembers, an ode to innocence, brought the proceedings to a close with a surprisingly sweet ice cream made with tea, lemon leaves and lemon blossoms. For Guzha, the tea memories and the times it was drunk, fill his youth, from boarding schools to being with his grandma. We helped ourselves to a bonus take-aways – an ice cream made with umqombothi “sandwiched” in amagwinya (vetkoek).

Hosted at The Fugard Theatre in Cape Town’s East City precinct, with satellite venues mostly close by, Open Book Festival has a wonderful buzz and reminded me of the vibe of the National Arts Festival in what was Grahamstown back in the late 1990s… having a full day of events lined up, time in between which needed to be filled with browsing and buying books and drinking wine, the ebb and flow of chattering crowds in the foyer, and a variety of enriching experiences.

My day had begun with a bright and intelligent panel discourse called Busting Food Myths, in which Leonie Joubert, Zayaan Khan and Mpho Tshukudu spoke to Jane Battersby about food sustainability in urban spaces. Joubert and Battersby are the authors of Tomatoes & Taxi Ranks, which examines the research into how the cities we live in shape what we eat. It’s fascinating, as was the conversation, and the book is available for download at tomatoesandtaxiranks.

Not food related unless you brought your lunch with you, but a soupcon of intimate deliciousness was 15 minutes in a tent – with only two other guests – being read to by an author from Kwela, which is celebrating 25 years of publishing. Later, I came back to make my contribution to the Leopard’s Leap Words For Wine (#Words4Wine), now a regular event on the Open Book programme.

How it works is you brought a pre-loved book (or six) that was exchanged for a generous glass of wine. For those of us who a) hoard books and/or b) want to donate them to a worthy cause, this is a brilliant idea. Those who still couldn’t bring themselves to part with their books were able to buy vouchers from The Book Lounge to participate. It’s such a good cause and I believe anyone who loves books and the worlds they open up for us, should be leaping (see what I did there?) at the chance to share this magic and wonder with everyone who needs it.

During the festival, the idea was to fill the shelves behind the wine bar, after which books will be categorised and distributed to libraries and schools in need of reading material as well as to the Open Box Library Project. These boxes, which are filled with books, games, materials for activities and other resource and placed in classrooms, give teachers and learners access to the resources without needing additional staff and admin.

“We are often discouraged by our country’s challenges, one of which is education. With this rather simple initiative – just sharing a pre-loved book – we hope to make a difference to those in need of good reading material,” says Leopard’s Leap CEO Hein Koegelenberg.