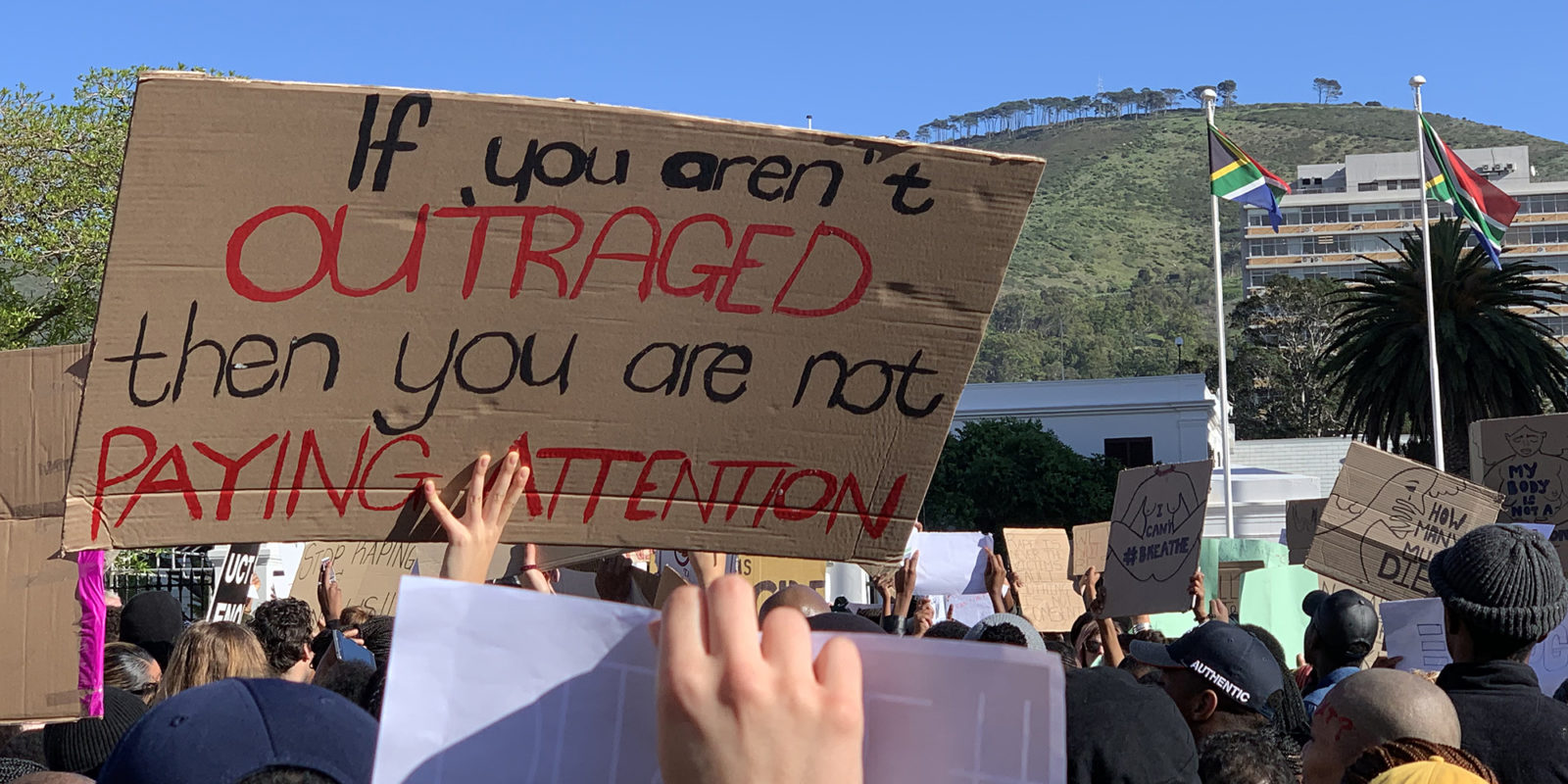 Gender-based violence and the killing of young women and children as well as the outbreak of xenophobic violence comes under the spotlight in parliament this week when the speaker of National Assembly hosts a debate on “the recent incidents of violence and criminality in the country”. It will be one of many debates and discussions held this week.

Last week, Parliament was the scene of mass protests as thousands took to the streets to protest against gender-based violence and the killing of young women and children. The catalyst for the protests was the rape and murder of 19-year-old UCT student Uyinene Mrwetyana.

In 2008, a series of violent attacks against foreign nationals broke out in Gauteng and spread to other provinces. In response to this, the National Assembly established a Task Team of Members of Parliament to probe these incidents. Six years later, there was a similar outbreak of violence and the legislature suspended its plenary sittings for a week to allow MPs to go to their constituencies and mobilise them to combat xenophobia. Furthermore, it established an ad hoc committee to probe the violence and make recommendations. Fast forward to 2019, and the country is experiencing another spate of xenophobic attacks.

In light of these events and the sombre mood hanging over the country, it is unsurprising that the Speaker of the National Assembly agreed that a debate on “the recent incidents of violence and criminality in the country including those affecting foreign nationals” is of immediate public importance and be prioritised on the programme. The debate is sponsored by IFP MP Mkhuleko Hlengwa and will take place on Tuesday.

On the same day, the National Assembly will discuss government’s proposal to introduce a regime of prescribed assets in South Africa. In its 2019 election manifesto, the ANC said it would investigate the introduction of prescribed assets on financial institutions’ funds to unlock resources for investments in social and economic development. In an oral question and answer session on 22 August, President Ramaphosa told Parliament the nation must debate the use of prescribed assets to rejuvenate investment and boost tepid economic growth. The term “prescribed assets” refers to a government policy that requires investors to hold a certain amount of investments in government-specified assets, such as government or state-owned companies’ bonds. Some have criticised the proposal citing a number of concerns including lower returns, market distortions, compromised pensioner benefits and reduced participation in retirement funds. Among the detractors is the DA’s Geordin Hill-Lewis who proposed the discussion. He argues that such a move “threatens the pension savings of millions of South Africans”.

On Wednesday, the social services cluster will answer oral questions. The cluster includes the Ministers of Basic Education, Health, High Education and Science and Technology, Human Settlements, Water and Sanitation, Social Development and Sport, Recreation and Arts and Culture. Everything from big-picture policy to specific scandals and non-performance will be on the radar.

Beyond this, the National Assembly has scheduled a two-day Strategic Planning Session for Thursday and Friday. The purpose of this workshop is to identify the outcomes and goals to be achieved in the Sixth Parliament as well as to set out the strategic path towards their attainment.

Meanwhile, in the NCOP, select Ministers in the Social Services Cluster will be probed about a variety of matters, including the implementation of the National Health Insurance, backlog in the issuing of title deeds, illegal deduction of SASSA grants and sustainable water management plans. Find the full question paper here.

In addition, NCOP delegates will take part in a one-day workshop on Thursday in preparation for next week’s Provincial Week.

There are many parliamentary committee meetings planned for the week.

Here are some of the highlights:

SCOPA will meet with a number of municipalities on their audit outcomes. In June, the Auditor-General expressed his disappointment and concern over the financial health of municipalities. “This undesirable state of deteriorating audit outcomes shows that various local government role players have been slow in implementing, and in many instances even disregarded the audit office recommendations”. The consolidated audit report indicates that of the 257 municipalities audited in 2017/18, only 18 received clean audits, a regression from the 33 municipalities that had received a clean audit in the previous year. A total of 63 municipalities worsened, with only 22 showing improvement. Twelve of the 18 clean audits were in the Western Cape, two in the Eastern Cape and one each in the Northern Cape, Gauteng, KwaZulu-Natal and Mpumalanga. Limpopo, North West and Free State had no clean audits. (Tuesday and Wednesday)

The National Assembly Rules Committee will meet to develop rules and procedures for the removal of the head of a Chapter 9 institution. The Justice committee took a resolution last month to refer the matter to the Rules Committee as it is considering an urgent request to remove the Public Protector from office. This decision to amend the rules is a pre-emptive measure to prevent any attempt to halt proceedings on the basis that there were no procedures in place. (Tuesday)

The Portfolio Committee on Trade and Industry will be briefed by the Department on the National Credit Amendment Act including its Socio-Economic Impact Assessment. The assessments are compiled for all policies and legislation to better understand the full costs and impact on the economy. The National Credit Amendment Act was signed into law by the President last month and provides debt relief for consumers who earn R7 ,500 per month or less and have unsecured debt amounting to R50,000 by suspending the debt in part or in full. The legislation has been criticised by the banking industry, which argues that the arbitrary expunging of debt effectively prevents banks from extending responsible credit, particularly to those in low-income households. (Tuesday)

The Select Committee on Health and Social Services will be briefed on the implementation plan of the National Health Insurance. Two weeks ago, the Portfolio Committee on Health was briefed by the Minister on the Bill. Parliament has invited comment on the bill. (Tuesday)

The SABC will be in the spotlight when MPs are briefed by the Special Investigating Unit (SIU) on its investigations into the public broadcaster. A recent SIU report implicated former Interim Board Members in the awarding of a security contract. (Tuesday)

The Standing and Select Committees on Appropriations will host public hearings on the Special Appropriation Bill. The Bill provides for the appropriation of an additional amount of money (R59-billion) for the requirements of the Department of Public Enterprises to assist Eskom with its financial obligations.

The Select Committee on Public Enterprises and Communication will meet with SA Express on the airline’s financial challenges, fleet maintenance and turnaround strategy. The airline said only six of its 22 aircraft were operating due to payment issues with the Airports Company South Africa. Acting CEO Siza Mzimela said the R1.2-billion bailout resolved solvency issues, but it did not resolve its working capital problem. (Wednesday)

The Joint Standing Committee on the Financial Management of Parliament will meet with the legislature’s Executive Authority on the outcomes of the Public Service Commission enquiry into the tragic suicide of former parliamentary section manager, Lennox Garane. Yesterday, the Sunday Times reported the PSC recommends Parliament’s Executive Authority assess the fitness to hold positions of three high-ranking parliamentary executives. These include the acting secretary to Parliament, secretary of the NCOP and the head of international relations. This meeting on the PSC report will take place in a closed session. (Wednesday)

Legislators will get an overview of existing trade relations and agreements, as well as ongoing trade negotiations; including a status report on Brexit negotiations. (Wednesday)

The Portfolio Committee on Police will be briefed by the Minister and SAPS on the 2019 Annual Crime Stats. No doubt the recent spike in violence will feature strongly in the meeting. Last year, the minister reported that of the top 10 stations with the highest murder rates, seven stations were in Cape Town, two stations in KwaZulu-Natal and one in the Eastern Cape. With 308 murders, Nyanga remained the station with the highest murder rate. (Thursday)

The Portfolio Committee on Higher Education, Science and Technology will host a colloquium on the Fourth Industrial Revolution. This is the latest instalment in a series of round table discussions that Parliament has hosted with the relevant government and industry stakeholders on the Fourth Industrial Revolution, in order to assess the progress made to date and the impact on the work of Parliament, state institutions, the private and business sectors and society at large. (Friday) DM