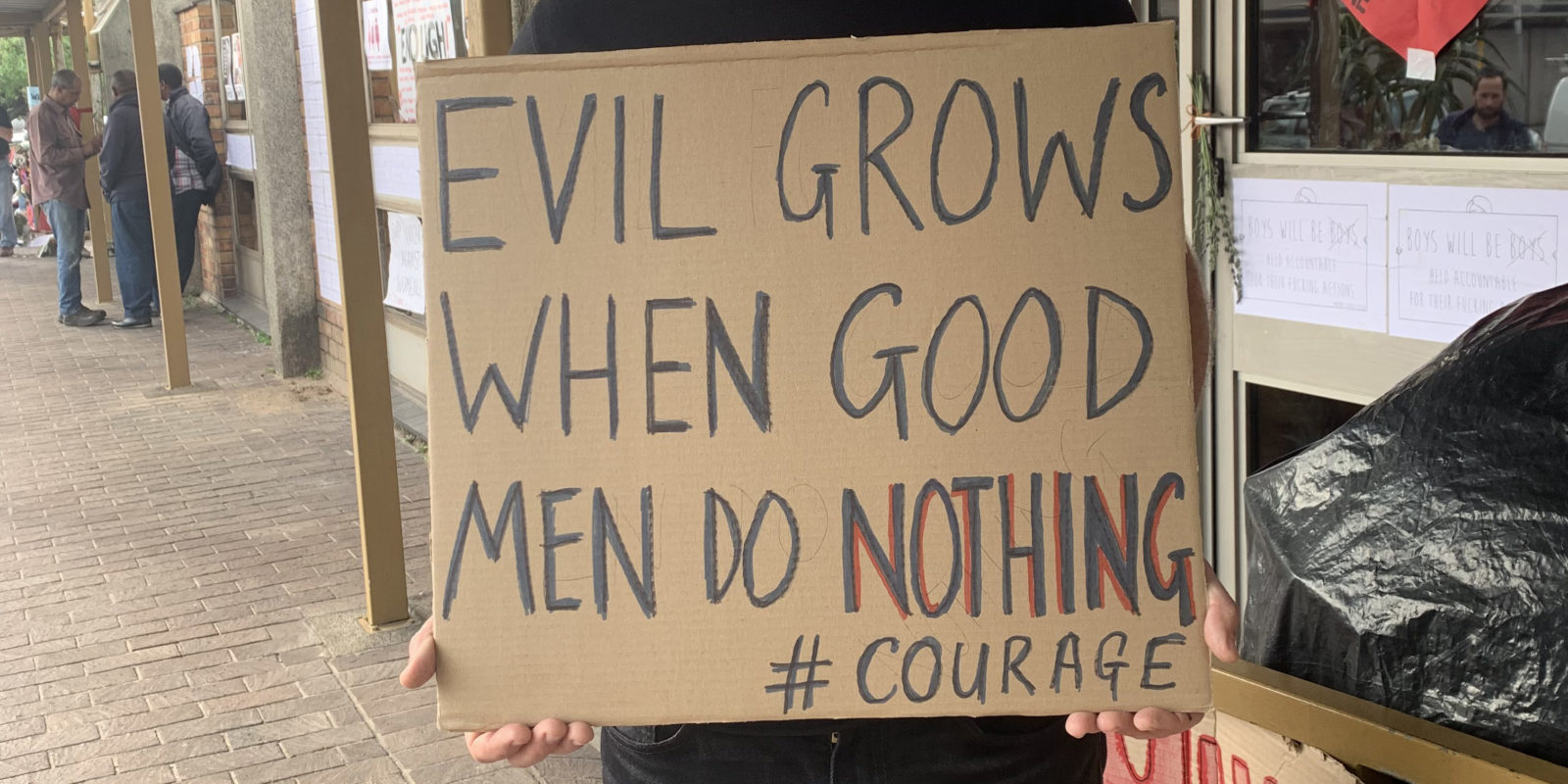 Simon Ekin holds a placard outside of the Post Office

On a busy overcast Monday morning, 9 September, a group of 30 men gathered outside the Post Office in Claremont where a University of Cape Town first-year student, Uyinene Mrwetyana was raped and murdered by a post office worker who has admitted to killing her.

It’s been a week since a suspect appeared in the Wynberg Magistrates Court in connection with the death of Uyinene Mrwetyana. The past week has seen protests against gender-based violence being held around the country. Most of the protests in Cape Town have taken place outside Parliament where protesters were addressed by the Minister of Police, Bheki Cele and President Cyril Ramaphosa.

On Monday, protests moved to the scene of the crime – the Clareinch Post Office, in Claremont. At the Post Office, the mood was sombre, scores of flower tributes lined the verandah. Posters of Mrwetyana’s face and other women who’ve died from gender-based violence cover its walls. Unlike last week’s protests which were overwhelmingly attended by women, there were mostly men at this one.

The men in attendance were fathers, brothers, husbands, uncles. There was no singing, only the sounds of cars hooting and driving past. For nine minutes they all stood there in silence.

“I’ve got this placard that says ‘evil grows when good men do nothing’, and I consider myself to be an alert, awake, conscious, a good man but what this (Mrwetyana’s death) has shown me that is that there are parts of myself, of my culture which are just toxic. I have two daughters, a wife and I’m trying to come to terms with this, this is the easy part. The big part is how do we do this every day, in our houses, in our relationships? It’s been very deep and reflective for me as a white man,” said Simon Ekin, who’s a coach and a speaker.

“We’re here to say that there are good men, that not all men are rapists and killers,” said Adrian Coetzee, who is part of the Mankind Project, which is a project that teaches men “what masculinity ought to be and the power that masculinity brings”.

While there were a few men at last week’s protests, Ekin thinks it has to do with men thinking that solidarity with women undermines their masculinity.

“There were some men here which is great but very few and why is that? I think that as men we think that ‘if I show solidarity to women I’m not being a real man because a real man doesn’t do touchy-feely, they don’t do vulnerable’ and it’s (showing solidarity with women) awkward and uncomfortable but that’s the only way things are going to change,” said Ekin.

“(Standing here) was sombre, but coming to this place has been sombre for a while,” Coetzee told Daily Maverick. DM

Mandisa Dukashe for Spotlight
Save 5 mins