The sweet and spicy ‘marital aid’ that is the koesister 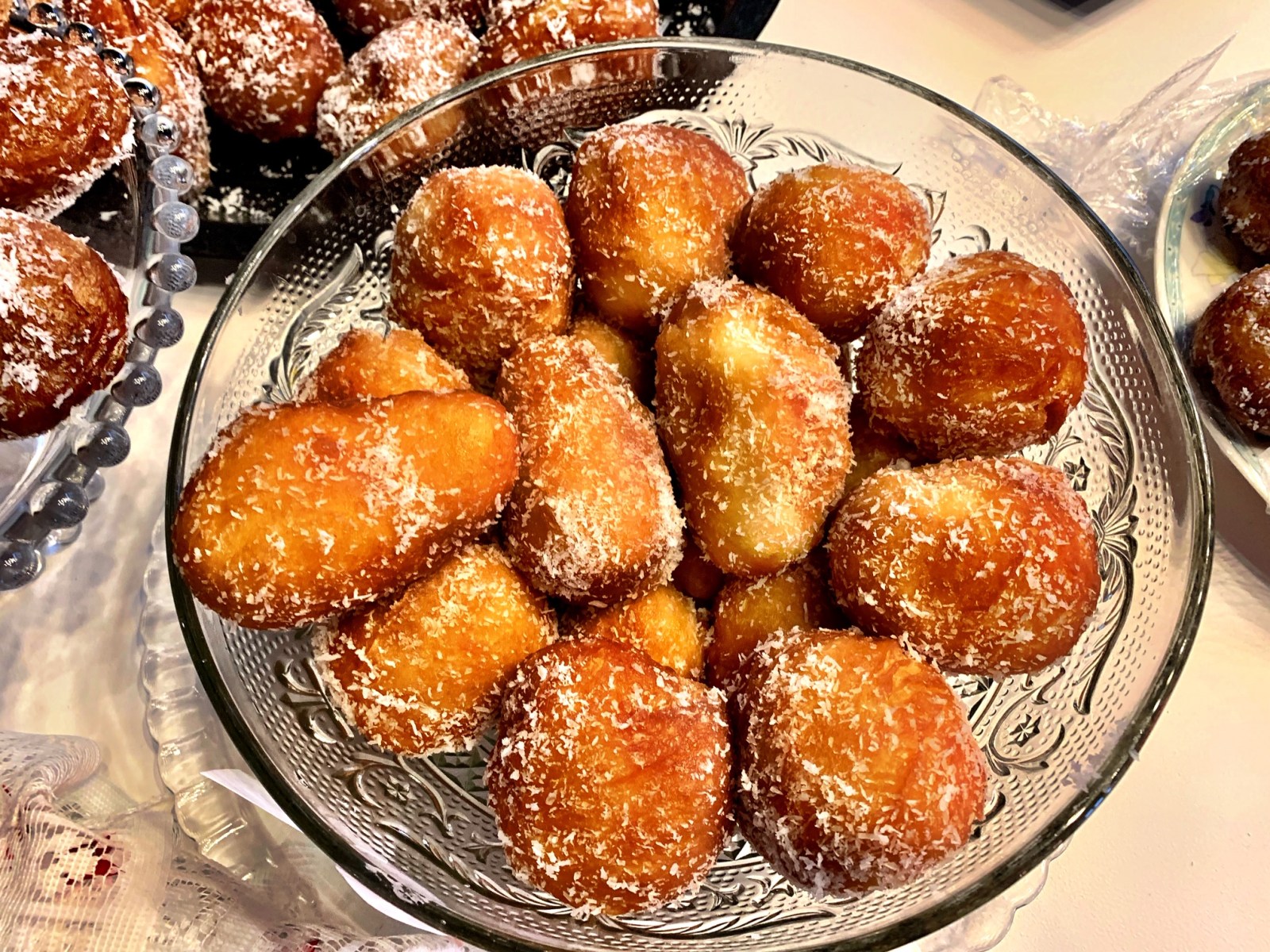 You thought Heritage Day aka National Braai Day was a thing? Look out for World Koesister Day.

The book Bo-Kaap Kitchen – “heritage recipes and true stories” gathered from the aunties of the area – says:

“The name of the Cape Malay koesister is said to describe polite gossiping among the spinsters. The Afrikaner version, the koeksister, derives from the Dutch word ‘koekje’ (cookie). While the oval Malay koesister, a deep-fried dumpling with a cake-like texture, is spicy and dipped in hot syrup and coconut, the Afrikaner plaited koeksister is much more sticky-sweet and crisp, dipped in cold sugar syrup after frying.”

Cariema Isaacs, author of Cooking For My Father In My Cape Malay Kitchen and Spice Odyssey, says she doesn’t know where the name originates from, but there shouldn’t be any rivalry between the two.

“I think in this instance it’s two things that sound alike but taste vastly different. They stand on their own and I think what we need to stop creating competition between them. Both are significant in our culinary heritage,” she says.

Koesisters are made and devoured on a Sunday, and while we might have our favourite places to get them, nothing will ever top the koesisters made by the aunty next door.

In her WhatsApp voice note to me, the much-loved ‘Aunty Merle’ said:

“You have to make it just right, like my neighbour Soraya Samsodien. There’s a fine line between a heavy koesister and a koesister that is just right, and Soraya knows how to meet that line. Thank you my darling. God bless and have a beautiful day.”

The koesister is not only a marital aid for Aunty Merle and Uncle Dennis, but it generates income for the aunties who make them, and also, there is time on a Sunday morning to do that.

“I do remember many of those aunties using that money to pay the utility bills or taking the money to buy groceries for the week,” recalls Isaacs. “People have gone on pilgrimage – Haj – with the money they have made selling koesisters, so it’s been a thriving business for many years.”

There are some rules for koesisters. First of all, they are meant to be eaten immediately, while they are still warm.

“Because that’s the only way to savour the flavour and take in all of the aromatics,” says Isaacs. “When they sit in a shop… I don’t know, it seems like they lose their soul the longer they sit. I know people say they don’t taste as good as they would have when warm, and I genuinely feel that. Most of us who have grown up with koesisters had them that way. We have hardly ever gone to a shop. It was the neighbour or lady up the road who had already got your mom’s order beforehand and you’d go fetch it.”

You don’t want to be the first one at the bowl, because the ones on top are the ones keeping the others just right.

Don’t put a lid on the Tupperware because that will make the koesister sweat and “dilute” the flavour.

“What goes into the koesister is important,” says Isaacs. “Dry ground ginger, ground cinnamon, ground cardamom, aniseed… and ground naartjie peel is essential. I can write a whole chapter just about that. This is part of the ritual of koesister making. I remember my grandmother and the aunty we used to buy our koesisters from in Bo-Kaap, they would take the peels and put them on the windowsill and let them dry. If you went into anyone’s house and you saw this, you just knew koesisters were going to be made on the Sunday coming. Once the peel was dried it would be put into a pestle and mortar and bashed until it’s a fine powder.

“There is a school of thought that no koesister can be authentic without this ingredient and I agree 100%. It’s one distinct ingredient that sets the koesister apart.”

Taking the koesister to new heights was the inaugural World KOEsister Day, which was held at the Radisson RED hotel at V&A Waterfront on Sunday (of course), 1 September 2019. The idea was born in September 2018 when local apparel brand and social media commentator Vannie Kaap “heeded the call of a popular radio station in Cape Town, suggesting we as Capetonians bring attention to something that forms part of our heritage and koesisters were one of them,” says founder Marc Jacobs.

“Vannie Kaap exists to celebrate Cape Coloured culture and educate others about it and the humble koesister ticked all the boxes and the rest, as they say, is history.”

Jacobs was a judge for the competition, along with the hotel’s chef Naseer Abdullah, Suidooster star Dean John Smith, and Kfm radio presenter Saskia Falken. Together they tasted their way through the 46 entries to eventually declare 69-year-old Mrs Asa Moos from Grassy Park – already known in her community as Koesister Queen – maker of the Kwaaiest KOEsister in the world.

Aunty Asa has been perfecting her recipe for more than 20 years.

“You know, I wasn’t really into koesisters back then but a really good friend of mine – Mrs Kulsum Christian – gave me her recipe and I set about making it my own, eventually perfecting the recipe as I went along,” she comments.

“My secret lies in the naartjie. Oven-dried and ground, I add just the right amount to my koesisters… but I can’t tell you how much though! That will always remain my secret,” she laughs. “The best advice I can give anyone wanting to perfect their recipe is to find the balance between the sweet and the spicy.”

In picking the winner, the judges focused on four categories, explains Abdullah:

“Never in my life have I ever eaten so many koesisters in one sitting… it was indeed an experience!” he adds.

“I could go on and on about what I judged the koesister on, but it all came down to taste and whether it transported me to a happy place en daar was ’n klomp van hulle wat net daai gedoen het,” says Jacobs.

The response to the event was humbling and amazing, continues Jacobs. “To see a large contingent of Muslim families supporting their grandmother, mother, aunty or sister literally had my emotions running wild with a sense of what Cape Town is all about: ‘The Mense!’.”

From Sunday, September 8, and every Sunday thereafter for a three-month period, the Radisson RED will be serving Aunty Asa’s award-winning koesisters between 10am and 12pm in the OUIBar + KTCHN restaurant in the hotel.

World KOEsister Day will be celebrated every year on the first Sunday in September from now on. DM