Progressive Prosperity:Turbocharging employment creation is within easy reach, and tourism is a great example

Progressive Prosperity:Turbocharging employment creation is within easy reach, and tourism is a great example

Unemployment rates have hit historical highs. With 40% of youth unemployed (and rising), can we afford to have a bias against labour-absorbing industries? Before despondency sets in, rather focus on pursuing employment creation opportunities that are within easy reach. Tourism is a perfect example.

Employment creation is clearly possible in SA. Unemployment can be solved. The evidence? Between 2001 and 2008, there was economic growth, 2.4 million jobs were created, unemployment rates fell from 30% to 23% and about 20% of the population was pulled out of poverty.

Then there was a dramatic reversal, taking unemployment rates close to what they were when the new democratic government came to power in 1994, some 25 years ago.

Between 2008-17, the economy created almost 1.5 million jobs. This may sound like a lot. But there are at least four trends indicating SA is off-course:

High unemployment is intractable only if we let it be so.

There are two temptations that must be resisted. The first is blaming it all on global dynamics. SA is deeply affected by global movements. The end of the commodity boom and other growth dampeners do not help. But SA underperforms relative to peer countries since 2008.

The second is attributing all problems to the past decade of State Capture and associated deteriorating institutional capacity. Some problems can be explained by this, but not all.

Despondency should only set in once opportunities that are within our control have been exhausted. South African tourism offers an excellent example.

Tourism speaks to almost all the objectives of the NDP. About 60% of jobs go to youth and up to 70% to women. It is geographically dispersed, stimulates small firms, increases global commercial presence, injects foreign demand and earns foreign exchange, creates awareness for investors and fosters cultural understanding. SA already has a competitive advantage as recognised by the World Travel and Tourism Council (WTTC).

The actions needed to stimulate the industry are well understood and relatively uncomplicated. High-impact actions include visa easing, tourism safety, vehicle licensing and destination marketing. Small interventions have a high-impact effect on job creation, that is felt faster than in any other industry.

As an example, Chinese tourists to Morocco and Tunisia jumped by 378% and 240% respectively within six months of easing visa regulations. And e-visas are now very common, found in 42 developing economies, even ones that are significantly less developed than SA.

The multipliers are significant, stimulating food and agriculture, the sales of vehicle, fuel, household articles and appliances; and finance and retail, among others. For every R100 spent directly on tourism, an almost equal additional amount of spending is generated through linkages and induced spending.

So, tourism is an industry that seems a perfect antidote for many of our problems.

Why was tourism allowed to stagnate over the past decade?

There was considerable success initially, remembering that SA was a fairly closed economy under apartheid. International arrivals grew from around one million in 1990 to almost five million by 1997, reaching about 9.5 million in 2008, but have hardly grown since then. The WTTC ranks SA highly at 35th out of 185 country destinations, but only 96th in its growth forecast for 2017-2027. This low growth is not a given, it is simply a reflection of the status quo. It speaks to underperformance relative to potential. 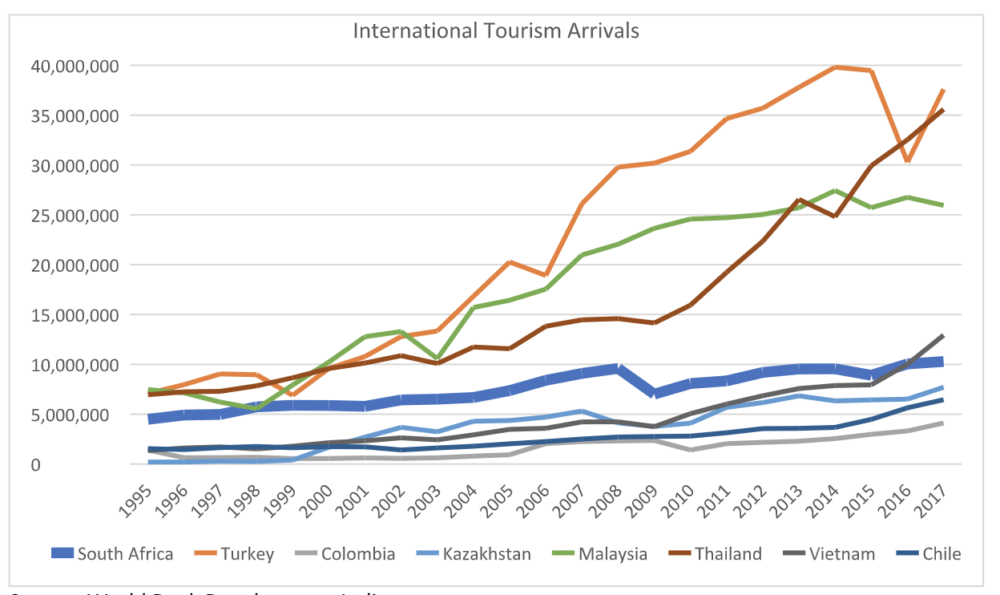 About 726,000 people are directly employed in SA tourism. Compare that to countries such as Mexico with four million tourism workers and Brazil, Thailand and the Philippines each with tourism employment sitting well over two million.

This is a sector with great potential but it’s wallowing in the doldrums. Thankfully, there are now some signs of change.

Late in 2018, the Tourism Business Council of SA (TBCSA) developed a sector strategy aimed at more than doubling the number of international tourists by 2030. This will create about two million jobs directly and indirectly. The growth strategy was inspired by the Public-Private Growth Initiative (PPGI) driven by Roelf Meyer and Johan van Zyl. Soon thereafter, President Cyril Ramaphosa was also inspired. These targets became those of the nation and government, as announced in the February and June 2019 SONAs.

Success in achieving sustained growth in tourism and supplier industries requires thinking about why SA has underperformed in this significant job-creating sector that is relatively easy to stimulate, even though youth unemployment is high and rising.

My articles of 24 July and 25 June propose at least four reasons why some countries gain traction in their development path. These are: shared purpose, effective sequencing of policy around an achievable complement of programmes, accountable and enabled leadership, and enabling the population to participate in the opportunities that arise.

The tourism industry experience shows how the absence of these elements has slowed down progress over the past decade.

The reception to the much-expanded TBCSA tourism strategy by stakeholders has been positive. Many smart, well-informed stakeholders said they were excited to have a more significant tourism plan as it would contribute to job creation. In the next breath, quite a few say, “But SA needs real sectors like smelting”. They may be thinking about manufacturing more generally, but I have heard this specific response many times.

Why does heavy industry seem “real”, while tourism does not?

Let’s be honest. Megaprojects have a machismo-prestige, wow-factor, ribbon-cutting effect, compared to smaller dispersed labour-intensive investments in tourism. It’s as if they are saying: “We men will retire to the parlour, smoke cigars and discuss important matters, while you ladies go off to the kitchen and do your silly things.”

Alas, there are also some technical explanations:

Before the TBCSA strategy, there were no specific objectives shared by the industry and government and no significant hard targets set across government programmes to ensure progress. Targets don’t guarantee success, but they are definitely the first necessary step.

There are a number of high-impact actions that are well understood, such as visa easing, timeous tourism vehicle licensing and tourist safety measures. They are not being resolved at a pace that would get SA back on its employment-creating path.

The 2018 Jobs Summit Framework Agreement said very little about tourism, which is strange given it is one of the only traded sectors that can create significant numbers of jobs, especially for youth. The small statement on tourism must have been penned by an economist. On the binding constraints, it essentially says: let’s assume departments responsible for visas and vehicle licensing will resolve the issues raised by stakeholders.

Is it possible that the approach to stakeholder negotiation over the past 25 years entrenches economic structures and vested interests? And drowns out new, important voices of potential sources of employment? Employment in all middle and upper-middle-income economies mostly comes from newer non-traditional sectors, especially in services. While it’s important to engage with existing interests, a strategic approach to making space for new interests is needed.

Shared purpose is not present where stakeholders offer halfhearted support.

The new energy to build the tourism industry would benefit from a shared belief in its benefits (delivering 20% of the NDP’s employment targets plus more), a commitment to common targets and objectives (doubling international arrivals and creating two million jobs), regular monitoring by the president of implementation (most immediately, e-Visas for major markets), concrete results (air arrivals growing or jobs created), and the avoidance of “war rooms” in favour of institutional accountability.

Given limited resources but the extensive cross-industry benefits of expanded tourism, it makes sense for captains of industry to coalesce in an all-out effort to deliver on what might be the most significant contributor to NDP economic objectives. BM

Dr Miriam Altman is director of Altman Advisory, adjunct professor at UCT’s Mandela School of Public Governance, and a commissioner on the National Planning Commission in the Presidency. She writes in her private capacity. This is the third in the Progressive Prosperity series; the previous two are on rebuilding leadership and breaking out of the slow-growth trap.