Progressive prosperity: SA can break out of a slow growth start-stop trap

Progressive prosperity: SA can break out of a slow growth start-stop trap

Other countries with challenges similar to South Africa have powered ahead. Breaking out of a slow-growth trap will require behaviour modification. Faster progress would be made if more attention was paid to the way policy is shaped and implemented.

Think of all the reasons why South Africa does not power ahead. High inequality, the legacy of apartheid, deep poverty, a divided society, crime and corruption might be top of the list. Economic arguments might point to distance from markets, a slow-growing region, or a resource curse.

If these are barriers to development and progress, then why have countries such as Chile, Malaysia, Vietnam, Turkey, Indonesia, India, Tunisia, Rwanda and Ethiopia raced forward since 1990? And others are jogging ahead, like Colombia or Peru.

This is the same period in which SA started on its own path to growth. We think of China and South Korea as achieving stellar status, shooting out of the stratosphere. Even they started on the back of deeply challenging environments. The countries on the list are “mere mortals” like us. If they can do it, surely we can too? What is the secret ingredient? 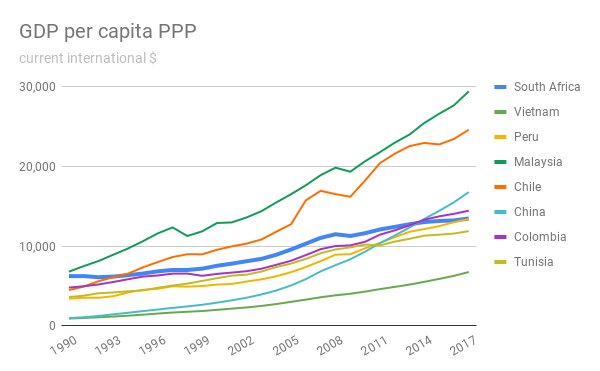 Cross country evidence shows that economies do better when they are more outward-oriented and exporting, promote foreign direct investment, lift savings and investment rates to 25% or more, and invest in human capital and infrastructure. All well and good, but how do policymakers go about doing this?

Very few developing countries make sustained progress over lengthy periods of time. The ones that are successful took mainstream advice with a pinch of salt in favour of development policy suited to their unique circumstances and then “crossing the river by feeling the stones”. Global comparisons offer no more than a useful benchmark and set of probabilities about what might work.

Being stuck in unproductive ways of doing things may be a more important explanation for slow progress in so many economies. The question is about how policy is executed, and less about precisely what the policies are.

Economies tend to follow a default path. Institutions take a certain shape and there are norms and routines in the way of doing things. So any policy regime has to be crafted for these unique circumstances to influence the behaviour of stakeholders that are responsible for implementation. When stuck, it may mean that these norms and routines are glueing the country onto its historical path. Development and progress require adaptation and an unglueing from that path. It is not surprising that few countries break out, given that there is so much uncertainty in doing so.

Much has changed in SA since the advent of democracy. But there are signs that more needs to be done to break with the historical path. Topline evidence? Fifty years of mostly slow per capita growth. High black African unemployment that passed the 20% mark by 1978 and persists at 27% today.

Post-1996, SA appeared to make a break with the past, and to potentially join the club of countries on a sustained development trajectory. More than a decade later, this faltered and the economy restored to its default. There were many successful reforms that seem to have reversed. Unfortunately, falling off the development bandwagon is far more common globally than is staying on.

I propose three differentiators between the few countries that make it and those that start-stop.

First is how effectively their governments shape and sequence around an achievable complement of programmes. Development is a messy, uncertain process, with each country having its own unique circumstances. There is no recipe or roadmap.

We do know that the government has to play a significant role. There is no example of major structural-developmental shifts driven by the market on its own.

We are all mere mortals with limited capacity. Distinguishing between actions that are pretty well understood from those for which we have no roadmap is important, since there are so many of the latter in a developing country.

An example of well-understood would be road building. An example of a no-roadmap kind would be the development of an accessible, affordable commuter transport system. The significance of this difference is clearly seen in SA. Areas of success generally involve fewer moving parts and known execution pathways. There has been a significant success in rolling out social grants or promoting smelters and auto manufacturing. There has been less success in the far more complex goal of transforming health, or promoting small business, tourism or agriculture.

Have high impact actions that are well-understood been delivered to their fullest extent? The evidence would say much more could be done, even based on existing programmes, rules, and budgets. If opportunities in well-understood programmes were exhausted, there would now be, at a minimum, thriving infrastructure, mining and tourism sectors, teachers would be “in class on time and teaching”, and small firms would be paid within 30 days by the public and corporate sector. The capability and rules are in place for all of these.

How many no-roadmap programmes can be taken on simultaneously? Their uncertainty requires greater attention and step-by-step learning. Early successes from small focused steps can enhance buy-in. Taking on too much uncertainty and overreaching can delay measurable results, leading to project abandonment and the stop-start behaviour characterising a country that is stuck.

When stakeholders say achievement of a goal requires a new fund, institution or programme, can they show that it really can’t be done within those that already exist? What will be the big, high-priority no-road-map programmes to solve significant quality of life challenges, that could sustain South Africans’ attention in a common (even if contested) purpose for the next decade? The President’s SONA commitment to every child being able to read for meaning by age 10 is certainly a good one.

Shared purpose is the foundation for continual improvement and resistance to reversals. This is the second differentiator. Matt Andrews, Lant Pritchett and Michael Woolcock of Harvard University argue this in their book Building State Capability: “An organisation is like an organism and constantly faces threats to its efficacy. Shared purpose is an organization’s immune system”.

They draw an analogy to an immune system that fights off flu as compared to one that is compromised and gets pneumonia and dies. When patronage is the illness, it is possible to progress and drive performance even without textbook-perfect meritocracy and governance. They propose that the problem isn’t patronage alone, but rather a lack of purpose-driven practices. The high-growth countries passing SA by all have this complexity of corruption but still get things done. Yes, SA has deep challenges of patronage and corruption that need to be addressed. But this is not the central cause of poor performance.

Shared purpose is not achieved through a woolly pathway of feel-good talk shops. Clear, coherent and consistent messaging about the actions sought from frontline workers to deliver on an organisational vision is an essential requirement from leaders. In the context of SA’s public sector, the first step is to ensure stable and credible leadership in key delivery areas. This has to be aligned to a system that evaluates performance and corrects, rewards, or sanctions.

Anderson, Pritchett and Woolcock show how complicated performance management is in any public service. There is no competition that imposes performance discipline. Yet it is essential to gaining legitimacy of the government’s programme.

Very significant effort is applied to stakeholder alignment in SA. But, strangely, it does not appear to result in a shared purpose that strengthens South Africa’s immune system. This needs to be better understood.

Enabling the population to participate in the opportunities that arise is the third differentiator. Professor Amartya Sen’s Capabilities Approach says freedom is only achieved when a population can equitably and effectively access opportunity. This is a foundational concept for the National Development Plan.

Resource-intensive economies tend to invest in things, and relatively less in people. Countries without resources, such as South Korea, Singapore and Rwanda, must invest in human capacity, as it is the only way to progress. Vietnam is an excellent example of investing in people to prepare for economic take-off.

Ten years ago, a group of leading Vietnamese economists visited South Africa. They said: “You are a more developed economy than ours, we have so much to learn from you”. But the truth was that we had so much to learn from an economy that had one-third of SA’s per capita income but a similar ranking on the UN’s Human Development Index (HDI), including one quarter the rate of under-5 child mortality and three times the internet penetration in homes.

The few countries that grew fast between 1990 and 2017 improved their HDI scores by more than 25%, as compared to 15% in slow growers. Naturally, growth can improve living standards, but it doesn’t always. The dynamic between human development and the growth process is what is important. They feed each other. The capacity should fuel dynamism and continual learning that enables step-by-step problem solving and improvement across society. More equitable access to opportunity is essential to progressive prosperity as the capabilities and talents of a wider population are engaged. BM