For the platinum Industry, Marikana was a ‘Mechanisation Moment’ 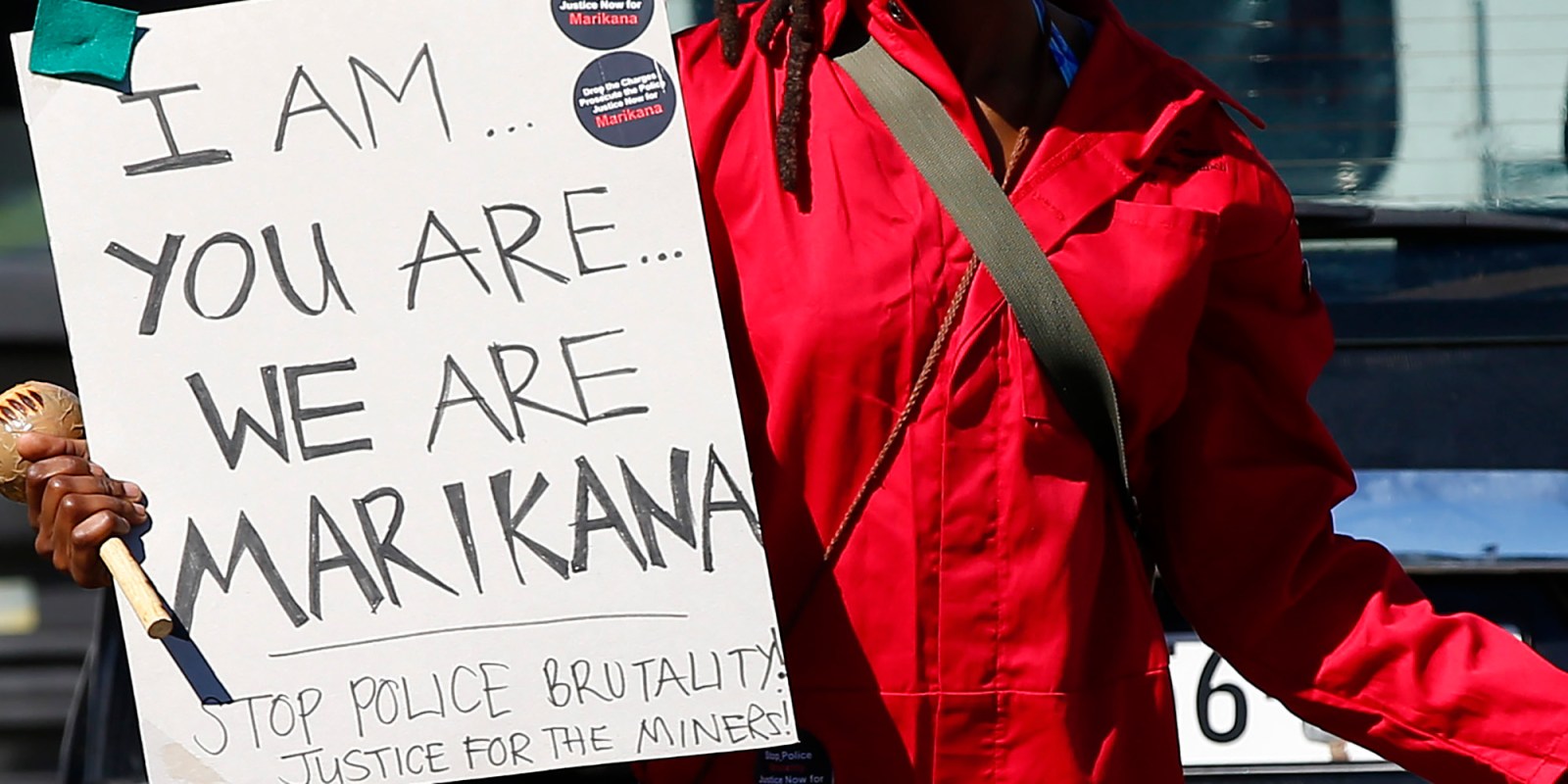 South Africans from various organisations protest in support of the miners of Marikana on the eve of the anniversary of their killing outside Parliament in Cape Town, South Africa, 15 August 2014. EPA/NIC BOTHMA

The Marikana massacre, which took place seven years ago on 16 August 2012, triggered seismic changes in the platinum industry, for better and worse. It is leaner, meaner and more profitable, with a focus on mechanisation. Workers have also done better and ply their trade in safer environments, but there are fewer of them, and capital has a distinct edge over labour at the bargaining table.

In 2012, South Africa’s platinum mining industry employed about 197,000 people who collectively earned R34.5-billion, according to the Minerals Council South Africa. So annual average earnings came in at about R175,000 per employee, or about R14,500 a month, at a time when the Marikana strikers were fighting for a roughly doubling of basic monthly wages to R12,500. That underscores the disparities in the industry that existed between the vast majority of semi-skilled guys sweating underground risking life and limb, and the generally air-conditioned world of upper management.

In 2018, a different picture emerges. The industry employed about 167,000 people, a 15% decrease from six years earlier. And their combined earnings amounted to more than R48 billion, or an annual average of R288,000 per employee, about 65% higher. Disparities between the stope and boardroom are still wide if not glaring, but the basic wages of the lowest-paid workers have generally risen by about that much and even more over that period.

AMCU President Joseph Mathunjwa said at a press conference earlier this week that this was testimony to the success of his union. It would be churlish to dismiss this assertion. AMCU managed to wring big pay hikes out of the industry, even when most of the shafts were losing money and the sector was on its knees. But other trends are also at work that are gradually undermining labour’s power on the platinum belt.

For the platinum industry, Marikana was clearly a “moment”, and one that is still shaking up the sector. Crucially, it accelerated a drive to mechanisation, a key reason why the labour force today is smaller, better paid, and working in safer conditions. For some investors, South Africa’s labour-intensive operations effectively became radioactive in the wake of Marikana. Putting a lid on social and labour unrest became a high priority.

Anglo American Platinum (Amplats) has been a leader on this front, making a highly profitable pivot to mechanisation while selling off the bulk of its labour-intensive operations to Sibanye-Stillwater. In July 2012, Amplats reported H1 headline earnings of R713-million. It produced 1.9 million platinum group metal (PGM) ounces in that period and employed 58,000 people, five of whom died on the job. A big spike in debt obligations also led the Anglo American unit to suspend dividends at that time.

Seven years later and you could be forgiven for thinking it was a different company operating in a different country, if not planet. No one died on the job in its latest six-month reporting period, and earnings more than doubled to R7.3-billion from the previous period – a tenfold increase on 2012. Yet in rand terms, the platinum price between 2012 and 2019 is not hugely different. A hefty interim dividend of R3-billion was paid out, and over 2.3 million ounces of PGMs were produced. And the workforce had more than halved to 25,000 employees. Productivity gains are among the advantages that come with mechanisation.

Other platinum producers are making big mechanisation pushes, involving a range of technologies, including replacing rock-drill operators (AMCU’s key support base) with machines that can drill and bolt. Massive mechanical rock cutters are also being used for tunnelling, among other innovations. Impala Platinum says its “focus in the short to medium term is to continue its strategic journey to transform into a PGM producer mining mechanised, low-cost ore bodies” while Northam Platinum’s new operations are shallow and mechanised. It is also experimenting with state-of-the-art tunnelling technology.

Sibanye, a Gold Fields’ spin-off that has since branched out into PGMs, has scored big with its purchase of the mechanised palladium-rich Stillwater operation in the US state of Montana. It now accounts for about 80% of the company’s value, while employing a fraction of its workforce.

And speaking of Gold Fields, the ditching of its labour-heavy gold assets that became Sibanye, coincided with its move to mechanisation (and AMCU’s move into gold), though its last South African operation, the mechanised South Deep mine, has become something of a boondoggle in the face of challenging geology.

And what happened to Lonmin? It was recently swallowed by Sibanye as it had ceased to be a “going concern”. Geology – with reefs too narrow and gradients too steep for machines to access – in the past stymied its costly and generally futile attempts at mechanisation. The company that was the focus of the violent wildcat strike that provided the backdrop to the police killing 34 miners on that fateful day, is now dead.

Marikana was certainly a moment for the industry and a mechanised one at that. Industry executives maintain that they were already moving that way in the face of up and down prices and soaring power (Eskom!) and labour costs, as well as mounting safety concerns. Indeed, for years before Marikana, platinum miners were generally getting above-inflation pay hikes, which highlights just how low their wages were in the past. We have previously highlighted how those pay increases may have made miners easy marks for predatory lenders, a state of affairs that further fuelled wage demands.

But there is little doubt that the big mechanisation wave got rolling after Marikana, underpinned by technological developments. A digital revolution is now also underway in the mines. This includes innovations such as “digital twinning”, whereby a “digital twin” mirrors, say, a mechanical drill. If the machine falls behind the “twin”, which in its virtual world operates at optimum capacity, that is a signal that something is wrong that requires immediate attention. This has huge implications for productivity and an operation’s skills base. It is also surely just a matter of time before such trends begin displacing labour in ways we have not yet conceived.

One of the upshots of all of this is that AMCU’s current wage demands and industry offers are not miles apart, with the exception of Sibanye/Lonmin, and even that is not a chasm. Mechanisation has historically undercut the power of labour, and it may be doing so now.

AMCU’s demands, while high (hikes of around 40% over the course of three years), are moderate by its standards. And Amplats, and Implats to a lesser degree, can absorb fairly high wage hikes in part because of the profits being reaped from mechanisation.

Another upshot is that the companies generally have robust balance sheets and cash reserves – so they can ride out a protracted strike.

There is still plenty of social unrest on the platinum belt. This is rooted in the understandable grievances of communities that feel excluded from revenue flows, local government failures, unemployment and persistent poverty. But the post-Marikana drive to mechanisation has made the industry leaner, meaner, and more profitable. This will help to contain labour unrest and is translating into higher wages and better working conditions for those who retain their jobs or acquire new skills. DM