Shelter from the storm of gender-based violence: protes...

Shelter from the storm of gender-based violence: protesters brave the weather to demand funds 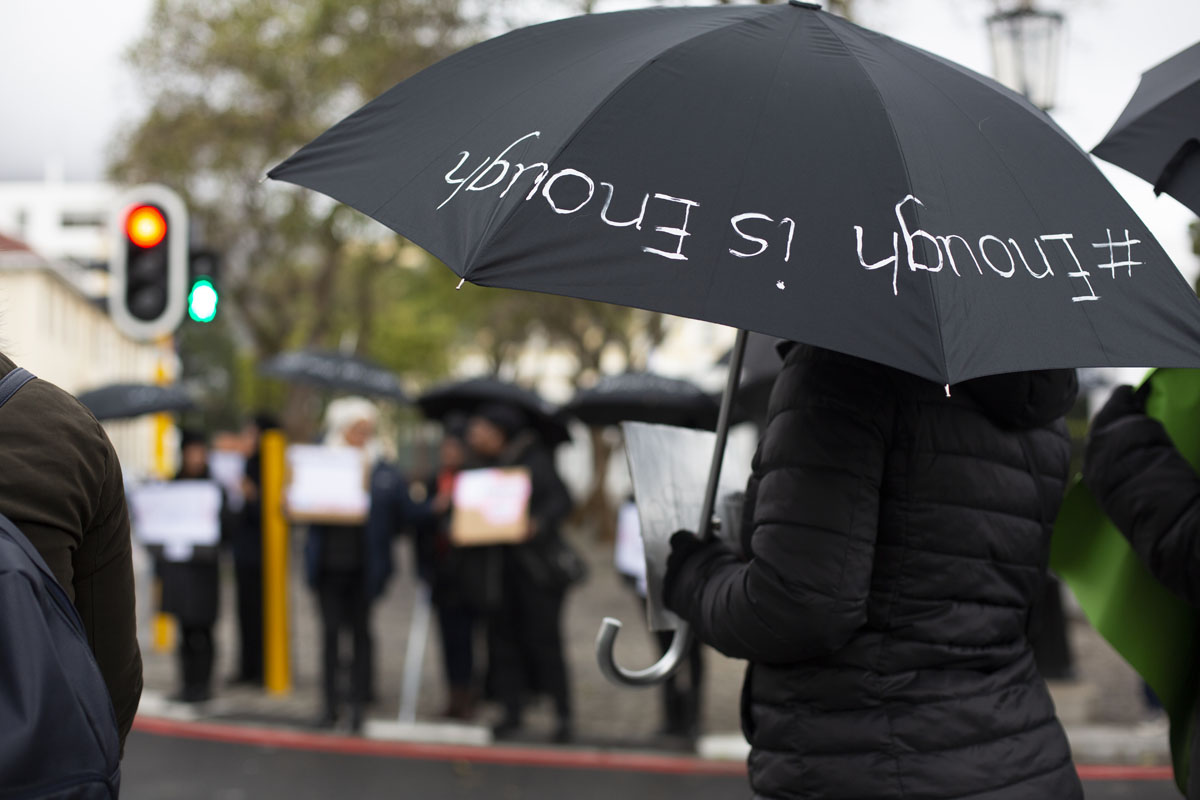 Amid torrential rain and howling winds, a small group of activists gathered outside Parliament on 23 July to protest against gender-based violence. Their memorandum, which demands funds be released to women’s shelters, was accepted by Social Development Minister Lindiwe Zulu.

“Most of the women we help, they don’t even have a proper place to sleep. So this is nothing for us in comparison to what they go through,” said Rose Bailey, an activist against gender-based violence who works for a shelter in the Northern Cape. While speaking to Daily Maverick about life experiences of women on the streets, Bailey held tightly to her umbrella as rain pelted the group of protesting women around her.

The protest, organised by the WCWSM (Western Cape Women’s Shelter Movement) together with the NSM (National Shelter Movement of South Africa), called for government to release the funding needed to implement the recommendations set out in the Commission for Gender Equality’s Investigative Report on the State of Shelters in South Africa.

The report found that funding to shelters that support survivors of gender-based violence and abuse is highly variable. In the memorandum handed over to Minister Lindiwe Zulu, WCWSM and NSM claim that subsidies provided by the Department of Social Development differ not only between provinces, but also within provinces.

Under a group of umbrellas with the words #EndAbuse and #EnoughIsEnough, Zulu addressed the group, saying: “At the end of the day nobody wants to be a beggar, everybody wants to be able to do something for themselves. So my task is really to see how do we work together towards empowering our people.”

But many of the activists and social workers present told Daily Maverick that empowering survivors of gender-based violence who seek assistance from shelters is difficult because of a lack of funding.

Nozuko Conjwa, a social work supervisor for a shelter in Khayelitsha said that some women do not meet the admission criteria to apply for accredited skills development courses because of their level of education.

“We try our best to teach them financial stability so that when they leave they can stand on their own two feet, but it takes a long time for someone to recover so they go back to their husbands,” said Conjwa.

According to Bailey, shelters in the Northern Cape are some of the most marginalised. “Currently we can only provide the most basic services to women, so we can’t actually graduate them out of their current circumstances because we don’t have any money for skill development so they can leave their abusive husbands or abusive relationships.

Because of this, Bailey told Daily Maverick she sees about 70% of women returning to their abusive households. “We need the government to invest in people and help teach proper skills development, not knitting and these small things they do.”

Having quickly given up on all pretence of remaining dry, Bernadine Bachar, director at the Saartjie Baartman Centre for Women and Children and chairperson of the WCWSM told Daily Maverick that some shelters are only allocated R9 per day to assist each woman they house, while others are given R71 per person per day.

“The ultimate goal is that are giving high quality, standardised services, and to do that we need adequate funding,” said Bachar. “So no employee should be getting less than minimum wage, shelters need to offer the same services, and through shelters we need to move towards eradicating gender based violence.”

The WCWSM and NSM in their memorandum demanded that by April 2020 all shelter funding models be uniformly allocated within and across provinces in order to ensure shelter services are standardised.

According to Bacher, the Western Cape government is doing well to support shelters, particularly in Cape Town. But the shelter movement wants the Department of Social Development to focus on shelters across the country, and ensure that women everywhere receive the help they need, especially women in areas with high levels of gender based violence.

Sarah Lekale, who works for a shelter in the Free State, told Daily Maverickthat of the 40 shelters that used to operate in the province, only four remain.

“In the Free State most of the houses are funded by the tenants and operators. We haven’t received funding since April,” said Lekale.

According to Bacher, it is not uncommon for shelter workers to take out personal loans in order to support their shelters and pay for food and housing. To rectify this, the movement has demanded that the DSD immediately release funding to all shelters, or else others will have to shut down as well. DM

See previous article in Daily Maverick here: Shelters – a last resort for abused women who have nowhere else to turn.