Tea in the Land of a Million Poets

Tea in the Land of a Million Poets 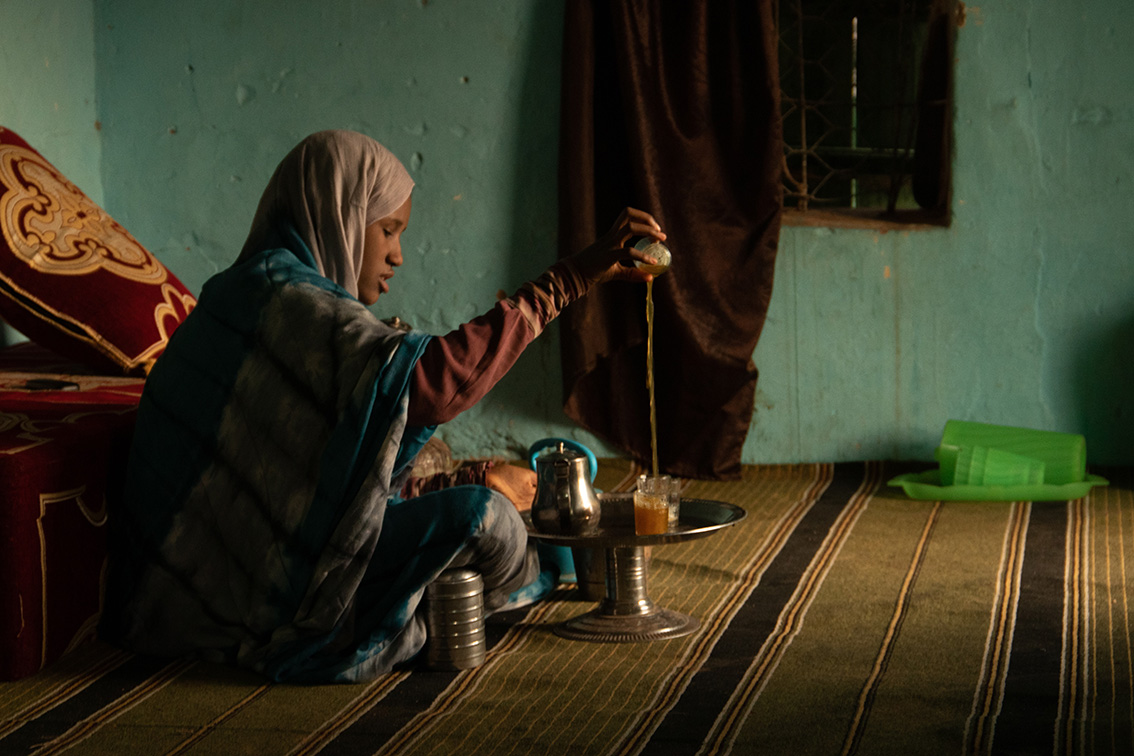 Photo by Renato Brazioli on Unsplash

Alcohol is illegal in the north African country of Mauritania, but to call it a dry country would be to disregard the fact that little cups of tea flow here in liberal amounts. It is unequalled in this world.

Mauritanians are desert people, not beach people. The downside of this is that getting to the seaside when you’re in Nouakchott means you have to drive a bit and negotiate some unsigned gravel roads to get to the beach. The upside is that you share the space with very few. Not that Mauritania is crowded – it has about 4.5-million inhabitants even though it’s the eleventh biggest state on the continent.

It was a beautiful night in early July – like all of the other nine nights I was in this country that sits on the Atlantic coast between Senegal and Morocco, flanked to the east by Mali. Officially Mauritania is part of north Africa, but there’s also a good shot of west Africa in town, such as the Senegalese joint where we lunched almost every day on the cheap fish, rice and vegetable dish called thiebou djenne, washed down with ice-cold, sweet red bissap – hibiscus juice.

On that beautiful night my friend, Abdou, packed his tea set – a small gas stove, four little glasses, and two teapots – into the boot of his old red car. There was also a matchbox-sized carton with green tea leaves, a bush of fresh mint, and a plastic cup with a solid quantity of sugar.

My mission in Mauritania was to attend the African Union mid-year summit, and a two-day struggle to get accredited, despite having followed all the right procedures, had still come to nought. There was no alcohol to medicate the stress – not that I thirsted for it any more anyway. We joined a group of Abdou’s friends at a table next to a restaurant right on the beach, sheltered from a light, warm breeze – and our party started.

Making the tea is a ritual. It’s a kind of pivot around which social life turns here, served to guests at home, at funerals, and at road stops when on a journey, or first thing in the morning, when you’re waiting for the minibus to leave. There was even avid tea-making in a compartment I shared with some young Polisario Front supporters I met on Mauritania’s only train. The guys showed me pictures on their phones of tea ceremonies on the rocks by the sea, at home, and pictures of their camels, proudly, a feast of camel meat, and of their militant political activities, which involved lots of shooting of guns. With the tea, there’s also the avid smoking of cigarettes. Just about everyone there smokes.

To make the tea, first you boil the water in the pot, and add the box of green tea, gunpowder-style, imported from China. Conversations at this point were introductory, with Abdou at the centre. He’s the only one who can speak English in addition to the two official languages, French and Arabic. My French is too basic for conversation, and I need English translations. The men said they knew about South Africa, its troubled history, and about Nelson Mandela. They learnt this history at school. Most South Africans shamefully don’t even know where Mauritania is, I informed them, much less that it’s also known as the land of a million poets.

When the tea was brewed, the sugar and mint were added. Abdou filled one of the little glasses, from the pot, and then, picking it up clutching the top of the glass where it’s not so hot, poured it into another cup from a height, so that it foamed, a light, sweet foam. The tea was then poured in and out of each cup, a layer of foam remaining behind in each. The remainder was then poured back into the teapot, and the first round was poured – bitter, like life. The caffeine coursed through my veins, as if I’d just downed a medicinal shot of whiskey or tequila.

For the second round, the mint and sugar were added to the pot, and the ritual repeated. Note, the sugar is liberally poured from whatever container it’s in, not measured with a teaspoon. In fact, there are no teaspoons in a Moroccan tea set. This round is sweet, like love.

We recited poems, Abdou translated the Arabic for me: There was an Arab Mauritanian, who saw a French woman in the market. They fell in love. She left, promising to send him an invite to visit, but the invite took too long. In fact, it never arrived. He started wishing that the French would colonise Mauritania again, so that his love would perchance return. My contribution is an Afrikaans poem, of heartbreak, by Ingrid Jonker. Bitterbessie dagbreek.

Then, the last round, gentle as death. The evening was winding down. People were leaving the beach for home. Somewhere on the dark gravel plains between here and the main road, boys were revving their cars. The last round usually leaves you on a high, with a slightly bitter aftertaste. The togetherness was drawing to a close. We said our goodbyes, packed the tea-set, and Abdou dropped me at the apartment in town where I stayed.

The next day I got my accreditation. DM