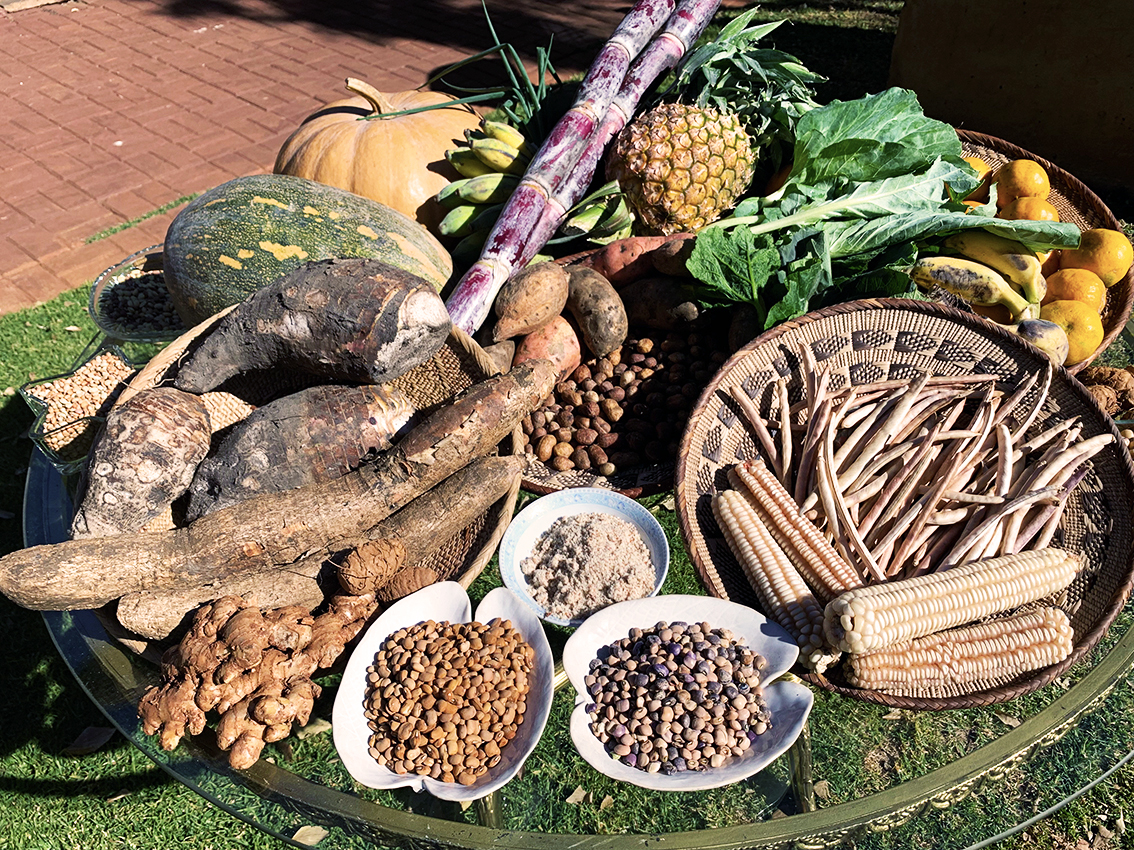 The bounty of the African soil on African Marmalade farm.

When Siphiwe Sithole wakes up with the sunrise, she doesn’t check her cellphone. She thinks about her plants, the vegetables and fruit we’ve forgotten we need. She farms so that we can remember, to eat them and benefit.

Siphiwe Sithole no longer slips on those high heels and then turns the key in a BMW’s ignition, but pulls on rather cute soft vellies and follows the grinding trail of her red tractor, on foot, out onto the lands of her Gauteng farm, African Marmalade.

I followed Siphiwe out one morning, marvelling at the undone bootlaces not tripping her. Despite them, Siphiwe remained pretty business-like. She marched me across the veld, knocking on the African watermelons and ruffling her vigorous jugo bean or bambara plants. She explained the especially dry soil in which they were growing.

Those beans, really a kind of groundnut, thrive in harsh environments. That section on the farm, as Siphiwe indicated, was sandy, crumbly and useless looking. I’ve seen the beautifully illustrated electronic files recording all Siphiwe’s plants, especially their health and food uses. Bambara leaves are packed with protein and phosphorus, useful in fodder, especially on the partner farm, where there are animals as well. The stems and roots are also edible, their own phosphorus and nitrogen wonderful for enriching such arid ground. Siphiwe stomped on meaningfully.

The bambara beans are a complete food and people can live on them solely if required, something unlikely on other legumes. If those beans were better recognised, they could be much more useful for combating malnutrition on our continent, especially since they’re remarkably resistant to droughts and pests.

They’re wonderfully tasty, eaten raw or cooked, pounded, boiled, in or out of their skins, roasted or used as flour. Yet, in Africa, we grow peanut crops instead, which came from Brazil only 400 years ago and that don’t have as many agricultural or dietary advantages. The thing is, we know about peanuts. We don’t know about our own original, indigenous crops.

Siphiwe and I trudged over to the fully arable sections while I was remembering something I’d worked on, involving very early African history. Because those beans had their name from the people who grew and travelled with them, the Bambara people or People of the Word of God or the Sun.

Ba: the people of; Mba: the Word; Ra: the sun or supreme god.

Groups of the Bambara departed what is now the Sudan, once Ancient Ethiopia, long before the Ethiopia that we know was established, travelling for centuries, some eventually settling in what has become Mali, near Timbuktu. The Bambara, also called Mbire (same etymology), who moved south, were the folk who founded Mapungubwe and, later, Great Zimbabwe. They had probably sown their beans down Africa, even where they were not already indigenous.

Siphiwe’s business model includes “financing the dream” of farming more and more indigenous and old African vegetables and fruits by also growing and supplying the stuff people are familiar with, for now, such as cabbages, broccoli, fennel and celery.

She kept pulling off leaves, grabbing vegetables from the African sections, because we were going to try out a few items to eat later. It was beginning to look like a helluva big meal going into that wheelbarrow.

Growing on the farm are blue, red and white mielies.

“No maize originated in Africa, but I’d say it’s now indigenised, though I only count this typically rural Zimbabwean eight-row cob,” said Siphiwe, handing one to me. It was fairly slim but spotlessly healthy and distinctly unlike those bulging yellow mielies under shrink-wrap in supermarkets. “Others have been modified over time.”

When we entered the tunnels, it was full-on dream stuff. They smelt sweet with the fruits, their flowers, pods and leaves flourishing within. There were African eggplants, indigenous flat pumpkins, African okra, Africa’s own “collard” greens, Ethiopian mustard spinach, moringa, cassava, horned cucumbers, pigeon-peas, Nigerian honey beans, plantains. Sunflowers were there to attract bees and borage for early disease warnings.

Siphiwe, in what I call the Discovery Tunnel, is particularly excited. This is where she experiments with growing old African plants and indigenous plants she’s been given or brought back from local travels. She advises:

“Just put it in your mouth – and taste it. Don’t worry, there’s no poison or spray on anything.”

I bite leaves, toss back little black berries from a vine, sample the quite delicious red seeds from a so-called bitter gourd. Siphiwe pops another untried thing called a West African bell pumpkin into our lunch collection, mainly for its promisingly verdant cooking leaves.

She’s so far from her corporate life as Head of Emerging Markets for Sanlam. I have imagined Siphiwe suddenly deciding to go African heritage farming, on yet another plane trip, on being faced with yet another bland and puzzling aeroplane meal, albeit a business class one. But it really happened in eSwatini (formerly Swaziland), enjoying indigenous food and, on buying an African foods cookbook, that the idea of farming her favourite indigenous foods occurred to her. From there, because of a business plan she drew up to transform communities on this continent and provide ingredients for African expats living in, say, Joburg, Siphiwe was chosen by the Tony Elumelu Foundation for mentorship and attended a boot camp in Lagos, before receiving $5,000 seed capital. She ditched the corporate CV and began crisscrossing the continent, looking for African heritage food seeds.

I hand-shredded the Bell pumpkin’s leaves as I would any other pumpkin’s and set them in a pot on the stove with a little water.

“Cut this madumbe very thin, like lace,” Siphiwe said as she prepared her purple, orange and white African sweet potatoes. “We’re going to make crisps. Much thinner than that!”

I had the image of transparent lacy slices in my head but not the equipment in my hand. The partner-farm guesthouse kitchen seemed not to feature a knife sharp enough for any amadumbe finesse.

We tasted the bell pumpkin leaves. They were face-pleatingly bitter. We added the farm’s own natural groundnut butter and tomatoes but they remained punitively revolting.

“Now we know,” said Siphiiwe. “I know they’re edible but I noticed the flowers were white instead of yellow so it’s a different sort of thing, maybe intended to be medicinal.” Maybe.

Siphiwe, her business partner Rhoda Masondo and Siphiwe’s daughter, Bonolo, and I piled the cooked foods and some farm chicken onto our plates, the roasted bambara beans ground and swirled in with very edible pumpkin leaves, already steamed with an African version of shallot and non-indigenous but sweet farm tomatoes.

For dessert, we sliced up a huge Mozambican pineapple, once South American, on the lawn, juices sluicing off the board as I hacked the fruit with the same blunt knife. We pranced, chomping the fruit from our hands.

“The most delicious pineapple in Africa! Where did you put the top? I’ve got to plant it. Better than any I can remember.” DM