Rusty Wire & Metal Roses: Secrets of a Karoo back yard 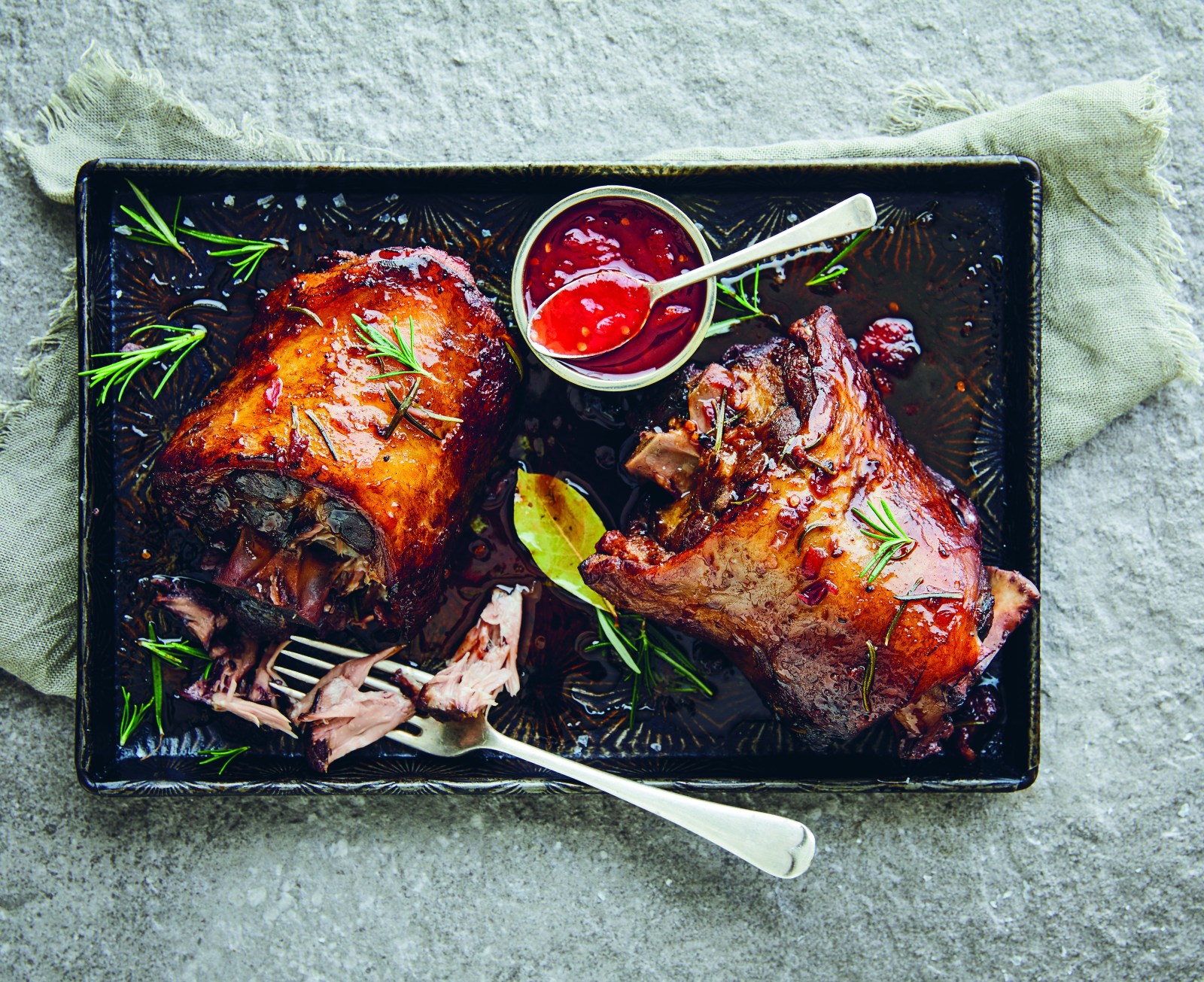 When you live in a small Karoo town, it’s never long before you get the itch to get into the back yard round the braai or to linger in the kitchen with wine, food and stories. In every house in every Karoo town, there’s another rich, eccentric tale to be told, and in every kitchen pantry there’s a recipe for something cooked long and slow.

In our Karoo back yards, dining rooms and kitchens there is much colour and many strange things. A red-beaded tortoise may lurk between spiky cacti and myriad succulents in a lopsided bath that once resided in a bathroom in the house. A bicycle made of plumbing pipes may lean against a river-washed log in a corner near a 1940s toy pram with Black-Eyed Susan growing out of it, while a giant, rusty wire lizard scurries away from it up the wall, as if having been mysteriously spooked.

It may be running away from Sean, the red-and-white cat, despite his harmless snoozing on a red cushion near a teal wall opposite the cerise wheelbarrow with its tumble of yellow and orange daisies. While Chai, the brown Burmese, appears in the doorway of the kitchen with its rusty-red floor, coral walls and sea urchin-green cupboards.

These colours do not frighten us. Keep your beige away from our front doors; keep it where you store your minimalism and your understated. “Soft earth tones” enervate us; “tastefully subtle” has us nodding off altogether. Give us loud and proud; give us colour, give us life.

On the outskirts of town, we pull in at the wire crafters to see what beauties they’ve made. Wire becomes a helicopter, a snake, a vase of flowers, a framed portrait. Bent and twisted, wound and coiled, discards become art to decorate the front stoep and the braai area, so that the nothingness that you first found out back of your new home becomes a place of strange enchantment and peace. There is nowhere in the world I want to be more than in my back yard. Give me your Times Square on New Year’s Eve or your summer’s night along the Champs Elyssee, yes, but it won’t be long before I’m longing for home and the Karoo sun on my neck, out back with the fire lit, glass in hand and the chops marinating.

All of this with, at night, fairy lights everywhere you look and, often, people in scarves and miscellaneous hats drinking the whiskey that was on special, craft beers from Port Elizabeth and vodka someone bought in Poland, while yours truly tends a potjie of oxtail that’s been bubbling away in its broth of red wine and Old Brown Sherry, its herbs from the garden and its much, much garlic.

These are not riches, not in the sense of these people having made bakkie-loads of dosh in the city and then retired to the country. You do find such types, but most of us are not like that. Yet these are riches, in the sense of, generally, most of us having fetched up on these gnarled, craggy shores with little or even nothing, to try to make a new life in a place where the prices of houses are what city prices were a quarter of a century ago. Shores? Much of the Karoo veld was once seabed, in time immemorial.

We’re silk-purse-from-a-sow’s-ear people. We’re not embarrassed to turn discarded rusted enamel soup bowls into a water feature, or solder metal “roses” and whatnot onto an unwanted old farm gate to transform it into a piece of functional Karoo art.

And we braai, and we stir the potjie pot, and we do not fear the soeters, the sweet fortified wines that go into our marinades, soups and cooking broths as we chill deeply while the gentle simmer and tight lid do their magic to the thing in the pot on the slow, low coals.

Our cars skip and hop around potholes like kids playing hop-scotch, needing only a flick or a tap of the wheel here and there to guide them through every street’s obstacle course. Our neighbours wave when we put out the garbage on Wednesdays. Every stranger in every car and bakkie raises a hand of friendship as you pass; you soon learn to do the same. Boys and girls in school uniform greet you in the shops, with a deferential nod, because that is what they’ve been taught.

And the geselligheid. One of those Afrikaans words for which the nearest English equivalent just won’t do. Conviviality, I guess. But geselligheid is more than just sitting around talking. More than mere small talk. Maybe it’s the air, or the whiskey or soeters in your glass, or maybe it’s that, when there’s not much else to do or anywhere in particular to go, the gathering around the braai under the stars beneath the twinkly lights – as if you needed more than the heavens already give – attains a special import, a deeper meaning as you share thoughts and stories formed and honed by your collective togetherness in the Karoo. In that thing that is “Karoo”. More than just a word, more than just a place. It’s a Karoo-ness. And you’re part of it, and it of you.

So what’s going on the fire or into the pot tonight? It might be Karoo saddle chops doused in olive oil and lemon juice and cooked on rosemary twigs on the hot grid. Or it might be All-Day Venison, made with the haunch of takbok (fallow deer) or the springbok legs your mate gave you after his hunt on the farm last week; this being the hunting season. You might be simmering them in a cast-iron pot in a broth that includes many herbs and something sweet, like jerepigo.

It might be your Obies Oxtail Potjie, in which the deep red wine in your cooking stock is enhanced with Old Brown Sherry and a spoonful of the quince jelly you made in May. Or, if that’s up, the raspberry jelly you found behind the nagtegaal jam in the cupboard.

Or it might be One-Man Hantam Karoo Lamb’s Neck, in which an entire neck is cooked in a stock of Tassies (a whole bottle of good old Tassenberg students’ dry red), muscadel, herbs and a little tomato konfyt for a good six hours.

In my back yard, where a flood light at ground level lights up the old yucca tree that towers above the house at night, we light a fire in the braai and another in the brazier, turn on the fairy lights, put some music on low. We bring our guitars and our stories, we open the wine and beers, and for a few hours our hearts sing under the Karoo night sky.

Wherever you are, you can plan the kind of meal we like to have out in our eccentric back yards, with the accompanying recipes for, yes, All-Day Venison, Obies Oxtail Potjie and One-Man Hantam Karoo Lamb’s Neck, all from my book foodSTUFF. DM

Tony Jackman’s foodSTUFF (Human & Rousseau), a cookbook-cum-memoir with essays about life, the Karoo, food, living, family and even grieving and illustrated by 60 recipes, was nominated for the Gourmand World Cookbook Awards (2018) in the category for best food writing. Book enquiries: [email protected]