Where to find authentic boiled bagels in Joburg

Where to find authentic boiled bagels in Joburg 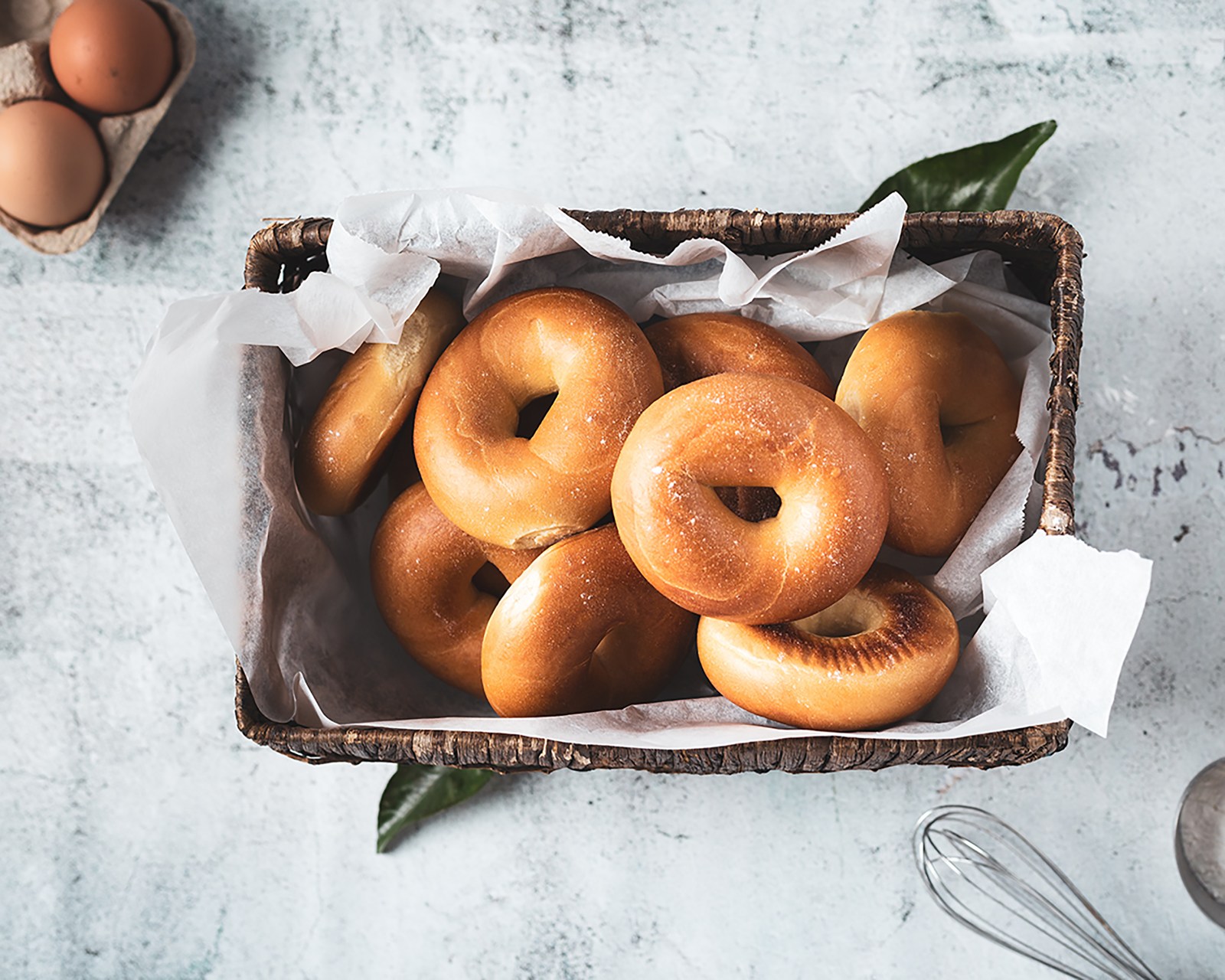 Photo by Mae Mu on Unsplash

If you walk into a supermarket and buy a bagel, you’re likely to encounter something more like a flavourless white bread roll rather than a soft, chewy bagel with a glossy, crisp exterior. For authentic boiled bagels in Joburg, you need to seek out the delis that have passed down a bagel recipe through generations.

In her book The Jewish Kitchen, award-winning food writer Clarissa Hyman describes her vision of the perfect bagel. She writes, “I am a purist when it comes to bagels: they should be crisp and glossy on the outside, soft but still satisfyingly chewy inside. I want them hand-mixed with a little egg and ever so slightly sweet, hand-rolled, boiled, and not over-baked, neither too large, puffy, or doughy.”

The process of baking bagels, first boiling then baking, is significantly different from baking rolls but the true history of the bagel remains unknown.

Hyman writes, “The origins of the bagel are unclear, but the word itself is said to derive from the Middle or High German verb boygen – to bend, linked to bügel, which means stirrup. A delicacy, because they were made of costly white flour, the bagel was supposed to be lucky because it represented the circle of life.”

The bagel was introduced to South Africans through Eastern European immigrants. One of Joburg’s oldest delis, Feigels Kosher Delicatessen, was opened by Lithuanian Jewish immigrants over 50 years ago.

In the 1920s, Feigel Zaslansky left Lithuania with her father, stepmother, and siblings; and travelled to South Africa by ship.

“She was in her 20s… she got married, and I think it was always her dream to own a deli,” says Tamar Dakes, Zaslansky’s granddaughter.

“She had a dream of wanting to share Eastern European food. She wanted to share Jewish food, and she loved to cook.”

Dakes’ grandmother began working at a deli called Judy’s on Yeoville’s historic Rockey Street. When the deli closed down, Zaslansky decided to open her own deli in the tiny vacant shop.

Zaslansky borrowed money, Tamar’s mother and uncle returned from Israel to help in the deli, and the whole family pooled their resources to renovate the shop.

“They cooked in their flat and she would carry food down to the deli,” says Dakes. After starting with traditional Jewish delicacies like blintzes and latkes, Feigels started baking traditional boiled bagels filled with sliced meat. At the time, they sold for about 6c per bagel.

The Feigels’ bagel recipe has remained the same for generations.

“They mix the dough, they roll it, and then they cut it. They throw the dough from one side of the bakery to the other and it lands on the counter. Everything is handmade. They roll them into little circles, then boil them. When they pop to the surface, they take them out, and then they go in the oven.”

Feigels serves a variety of bagel fillings, from chicken mayo to chopped herring, but the must-try filling is a hot bagel with beef brisket, pickles and piccalilli – a mustard relish with chopped pickles and vegetables – which creates a sweet and tangy sensation with each bite.

Feigels has stores in Lyndhurst, Glenhazel and at Blubird Shopping Centre, but for citywide access to a decent bagel, you can try Fournos Bakery. Their bagels are authentically boiled and baked, and even though they’re not as dense as other deli bagels, they are satisfyingly chewy.

Norwood Pick n Pay’s kosher bakery also sells authentic boiled bagels. Although some bagels are a little oblong in shape, the taste and texture is perfect, with a crisp exterior. Even if they’re a few days old, you can pop them in the toaster and enjoy with a schmear of peanut butter.

All the bagel fillings are made in-house, from the classic egg mayo to luxurious salmon and cream cheese. Bagel Zone even offers variety with its cream cheese flavours: plain, olive, salmon, jalapeno and pesto. Top off your decadent bagel with tomatoes, red onion, or wafer-thin slices of cucumber and pickles.

Leon Hesselson, the founder of Bagel Zone, was inspired by a business trip to the US many years ago. He was staying close to a bagel shop and ate nothing but bagels for breakfast for weeks.

He developed his own bagel recipe which remains a secret to this day.

“The biggest thing is the boiling. That’s the universal secret to a bagel. If it’s not boiled then it’s not a bagel.”

“The New York bagel is known to be dense and chewier than the Montreal-style bagel which is softer. We often call our bagels a Montreal-hybrid,” says Bokov.

Bagel Zone has stores in Fairmount and Benmore Gardens. The Benmore branch is frequented by American visitors from the embassy close by. “We often get comments… people saying these are the best bagels outside of New York,” says Bokov.

From plain hot bagels at Feigels to herbaceous za’atar ones from Bagel Zone, Joburg offers genuine boiled bagels – not just white rolls with a hole in the middle. Forget New York and Montreal, Joburg bagels are laden with passion and tradition, made from ancient recipes passed down from one generation to the next. DM