Rockin’ Cape/Moroccan: The twin spicy cuisines that b... 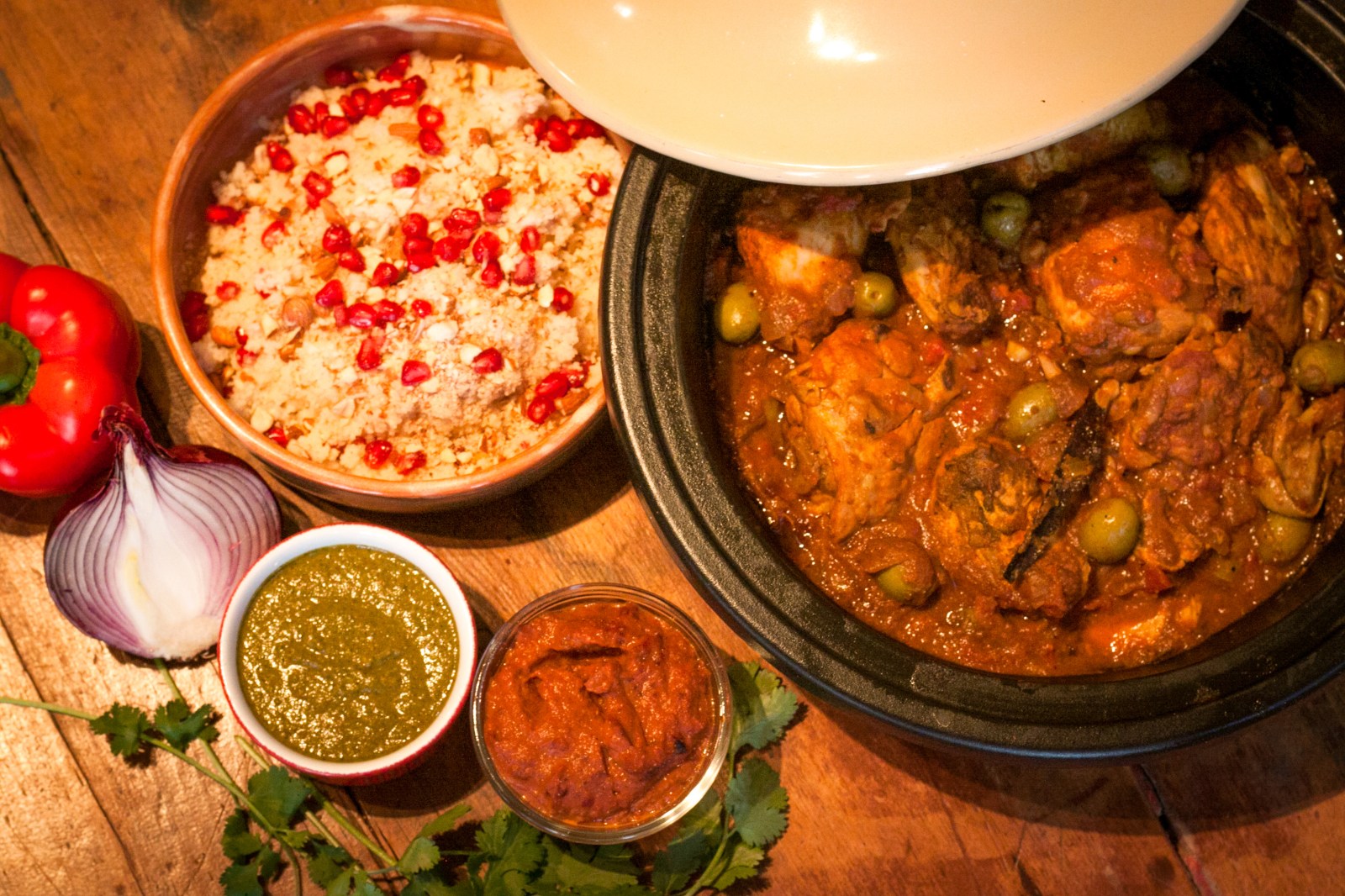 The cuisines of Morocco and the Cape are a continent apart but have much in common. Fruity and spicy, colourful and traditional. Slow-cooked meats, fragrant sweets. They’re best when kept traditional. But don’t get me started on the deconstructed bobotie I once had in Franschhoek.

Think spices and world cuisines, especially from a southern African perspective, and two are likely to leap out of the pack: Moroccan cuisine, from the far north-west, and Cape cuisine, from the Tavern of the Seas in the deep south-west.

Of course, there are big differences in flavour, because no two spice combinations are the same. But those core elements of meat, fruit and spices, and occasionally nuts, are central to many of the dishes from the old colonial Cape kitchens, and they’re all over Moroccan cuisine. Cinnamon and cumin are essential both to Cape Malay and Moroccan tagine recipes, yet how different they are in execution.

It never ceases to amaze me that visitors to Cape Town have to search for restaurants specialising in the local cuisine. They are there, but they should be in every street, every suburb. Here and there you’ll find a restaurant where a famous, award-winning chef tweaks and fiddles with traditional Cape dishes. Put another way, the dish is changed. It’s no longer what it says on the tin. And don’t get me started on the deconstructed bobotie I once had in Franschhoek.

Okay, do. A compote of macerated raisins, three medallions of lamb rump, and some creamy scrambled egg, even if the egg was cooked sous vide, is not a bloody bobotie. (In fact, if you want to know what a bobotie really is, read Louzel Lombard Steyn’s Farm to Table column in this issue of Thank God It’s Food).

Imagine visiting Marrakesh and struggling to find the local fare, as you would at the Cape. Is this because the Cape has an inferiority complex about its varied traditional cuisines, chiefly Cape Malay and Cape Dutch, with other influences of course? Is it because the old Cape dishes just aren’t good enough? Or does its relative anonymity have to do with shame about the truth that, as with anything to do with our colonial past, there are inevitably dank nooks and crannies where Past Inequity cowers, hoping to be forgotten?

But food brings us to the table, and at the table we join hands and minds in forging friendships and alliances, not division. So if anything can help us come together, it’s food, the cooking of it and the eating of it.

Imagine a fusion of Cape and Moroccan cuisines in a single, colourful restaurant. Not in one dish, but a menu that offers dishes with dates and chermoula, tagines of chicken and figs, and Cape originals like the best ever bobotie and bredies (a tomato bredie made well is a very fine thing); akhni, breyani and turmeric-based curries with fruity chutneys. I’d book there right away, sooner than I would at a poncy palace boasting an important chef with an award up his apron yet who might not be able to tell you how to make waterblommetjiebredie. And if s/he did, would nestle something on a bed of something else and spend far too much time pondering which element to turn into a gel and which into a foam. “Chef sent you this little amuse bouche, it’s waterblommetjie heart marinated in ponzu and mirin, with watercress purée and hemp soil.” On a spoon.

The Cape Malay style of curry is a very particular thing which has little in common with its Durban counterpart and deserves to be celebrated. There’s surely a gap in the market for a home delivery service which, rather than pizza or “Chinese”, offers a menu of traditional Cape fare. Most of these dishes won’t spoil with travel and are easily reheated, so that’s no hindrance.

Meanwhile, to the far north, there’s a world of delight for the needy palate to be found in the vibrant, zinging flavours of Morocco and, for that matter, neighbouring Tunisia. I tried my hand at making chermoula the other day, and harissa, with results that delighted me. One of those occasions when something you’ve never tried before comes out just right.

Harissa is red, chermoula green. Red peppers are the hero of the first, coriander leaves of the second. Harissa is Tunisian, but is also used in Moroccan cuisine, often in a milder form; chermoula is used across several north African countries, from Morocco to Libya.

A vague rule of thumb which I think makes sense is: if it’s cooked in a tagine, think of it as Moroccan. So much for tradition and purity. Just try to avoid the temptation to turn the red pepper into a foam, and the coriander leaves into gel. Here follow recipes for them and for a tagine I made of chicken with green olives, chermoula, almonds and pomegranate.

Place everything in a blender and blitz until it’s a lovely green paste. That’s it. 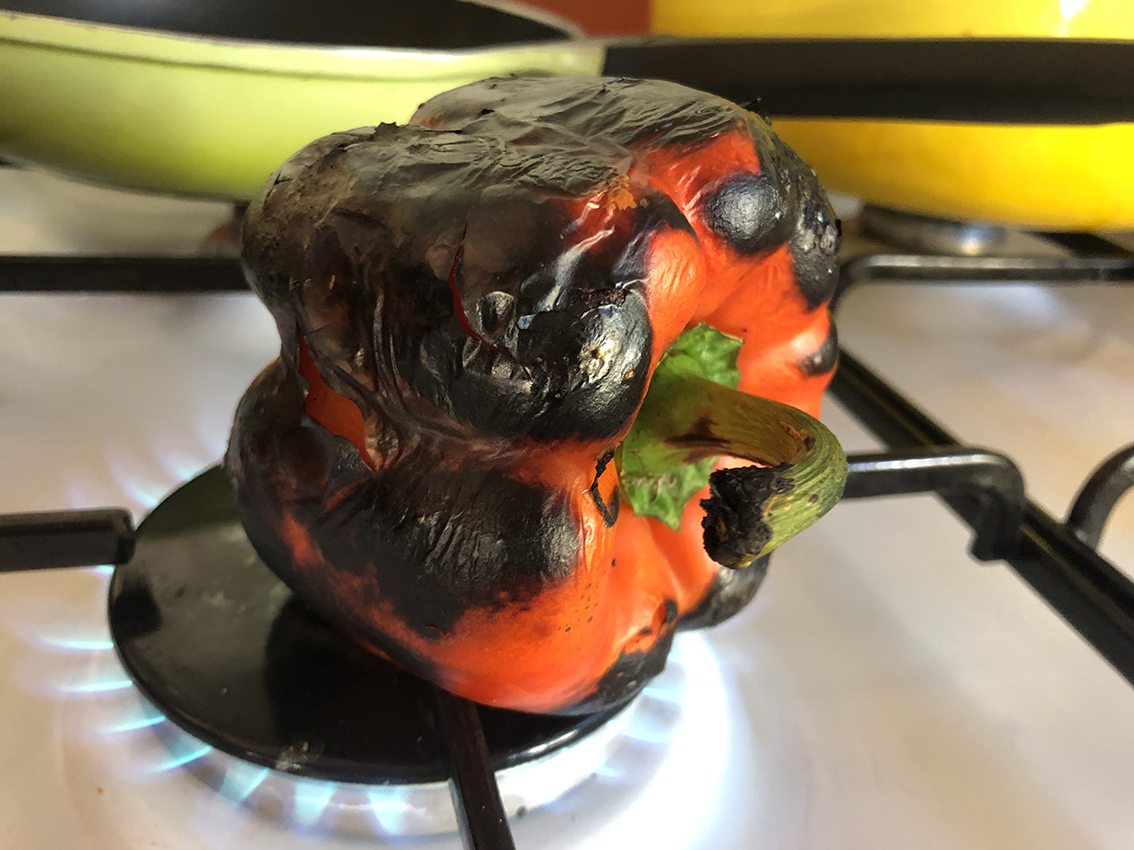 On a high gas flame, burn the pepper on all sides until the skin is blackened.

Place in a bowl, cover and cool to room temperature.

Peel off the blackened skin and discard this and the seeds.

In a pan over a low flame, toast the cumin, coriander and caraway seeds until they start to crackle, and then grind to a powder. I used the grinder part of a blender.

Fry the onion and garlic in olive oil for two minutes, add the chillies and cook for 10 minutes, stirring.

Blend everything, including the ground spices, until it’s a smooth, thick paste.

4 chicken breasts, on the bone, each breast cut in half (no, not lengthwise, across the middle)
1 large red onion, chopped
3 cloves garlic, peeled and chopped
20 or so green olives (any kind you prefer)
1 can chopped tomatoes
1 can (the same one as above) chicken stock
Half of the chermoula paste from the recipe above
Couscous, made according to the packet instructions
12 almonds, crushed and lightly toasted in a frying pan
Pomegranate seeds
Salt and pepper to taste

Saute chopped onion and garlic in a tagine until softened. Add chicken pieces and toss around over heat for two minutes.

Add tomatoes and stock, green olives and chermoula, season to taste with salt and (optional) pepper, stir, and bring to a simmer.

Cover the tagine and cook over a moderate to low heat for an hour. Check it now and then to avoid it catching.

Prepare the couscous and toast the crushed almonds.

Serve the dish on couscous, scattered with pomegranate seeds and crushed almonds. DM