Tough talk by the AU and US looks unlikely to dislodge... 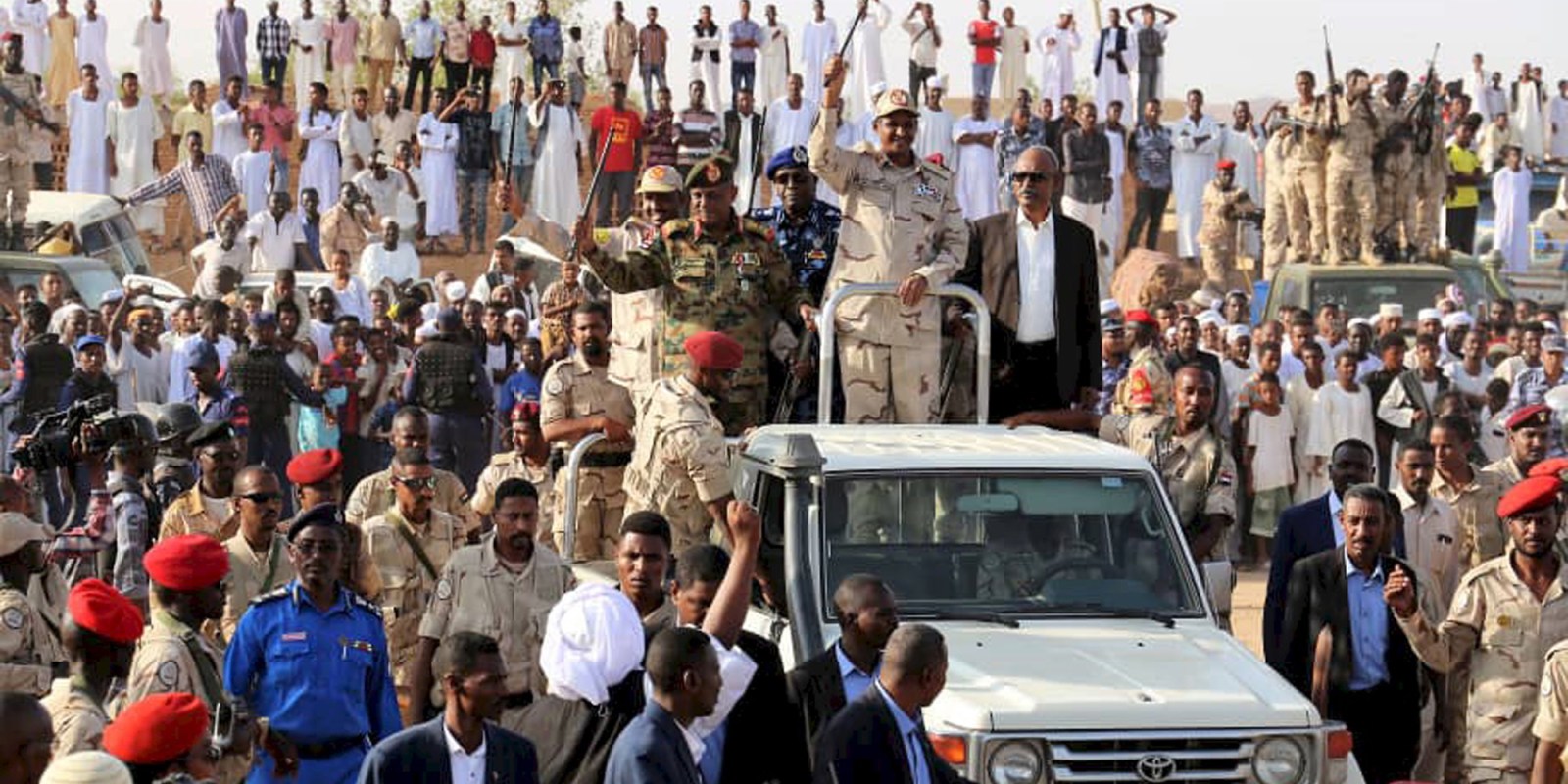 Deputy Chairman of the Transitional Military Council in Sudan Mohamed Hamdan Dagalo, also known as Hemedti, gestures to supporters during a rally in Qarry village, some 45km from Khartoum, on 15 June 2019. (Photo: EPA-EFE / STRINGER)

Khartoum’s military leaders are shrugging off the pressure on them mainly because of support from Saudi Arabia, the UAE and Egypt. And with sanctions against Sudan a distinct possibility, how will South Africa vote?

Despite growing pressure on the Sudanese military junta by the African Union and now the US, the Arab Spring which until recently looked so promising in that country, is wilting.

As in other countries like Egypt, it’s now fairly clear that the Sudanese military helped get rid of President Omar al-Bashir on 11 April 2019 only to entrench its own power, not to usher in civilian democracy.

Last week US Assistant Secretary of State for Africa Tibor Nagy and newly-appointed US Special Envoy to Sudan and South Sudan Donald Booth met the leader of the Sudanese junta – the Transitional Military Council (TMC) – General Abdel-Fattah al-Burhan, and were “frank and direct” in their demands for the military to return swiftly to good-faith negotiations with civilian protesters aimed at handing over power to a civilian government.

Nagy warned that: “The United States has an arsenal of tools that are both positive and negative, and we absolutely reserve the right to use them as we deem fit to help achieve”… a civilian-led government that is acceptable to the Sudanese people.”

And he reminded journalists that the AU also had sanctions it was ready to use. The AU has threatened to impose these sanctions on TMC leaders if they don’t hand power to a transitional civilian authority by 30 June 2019.

There are few signs so far though that the military authorities feel intimidated. This was dramatically demonstrated on 3 June when the military – reportedly the notorious Rapid Support Forces – violently dispersed a sit-in protest in front of defence headquarters in Khartoum. About 118 people were killed, according to spokespersons for the protesters.

The crackdown followed months of largely peaceful negotiations which stalled because the military refused to cede power during a transition to elections for a new government.

Nagy said in a telephone press conference from Addis Ababa that he had told Al-Burhan: “The events of June 3rd constituted a 180-degree turn in the way events were going, with murder, rape, pillaging, by members of the Security Forces.”

He told the military leader there had to be an independent and credible investigation which held accountable the perpetrators of those crimes.

Nagy said Al-Burhan was “adamant that there will be accountability”.

And Nagy said he and Booth had also asked Al-Burhan to free all detainees, withdraw troops from Khartoum and “possibly” restore the Internet which the military authorities turned off when they cracked down on the protesters on 3 June.

Nagy said Al-Burhan claimed there were no longer any protesters in detention but did not say how the TMC chairman had responded to his other proposals.

Nagy dismissed criticism that the US had arrived late to the Sudan crisis. He said until the June 3 crackdown, the negotiations between the military and the civilian protesters – organised as the Forces for Freedom and Change (FCC) or Declaration for Freedom and Change (DFC) – had been “moving forward in such a favourable direction after 35 years of tragedy for Sudan” and the two sides had regarded each other as partners.

But since then, the crackdown outside mediation – instead of direct talks between the military and the protesters – had become necessary because “the two parties absolutely distrust each other”. Yet Nagy stressed that the US had only become involved to support the mediation initiative of the AU and the regional Intergovernmental Authority for Development (IGAD) which was being led by Ethiopian Prime Minister Abiy Ahmed.

Nagy added that there were “spoilers” on both sides of the conflict in Sudan and that there were several possible scenarios for the country. The positive one was an agreement between the two sides on a transitional process which concluded with a civilian-led government acceptable to the Sudanese people.

But there were also some “very negative” possible scenarios including “the type of chaos that exists in Libya or Somalia” or “the return of the old regime” or “the continuation of the TMC”.

The TMC did vow after the 3 June crackdown that it was withdrawing from negotiations and would remain in office until elections for a civilian government in nine months’ time. But Al-Burhan later retracted that statement and said the TMC was ready to resume negotiations.

Despite the US throwing its weight behind the AU mediation and Nagy’s not-so-veiled threat to use whatever tools necessary to do the job, many analysts are sceptical about the chances of success.

The US security analysis company Stratfor writes that successful negotiations on a transitional process are now “increasingly unlikely”.

While the military council would face significant diplomatic backlash over its strategy of refusing to hand over control of the transition to civilians, “its support from the Gulf states, Russia and China will likely allow it to weather the storm”.

Stratfor said just because the Sudanese military had delivered the coup de grace for the civilian protesters on 11 April by ousting longtime President Al-Bashir, this did not mean they had the same interests as the protesters.

There are different factions in the military and the Rapid Support Forces – which grew from the brutal Janjaweed Arab militias that committed atrocities in Darfur – are widely considered the most recalcitrant. But Stratfor’s analysts believe all military factions share a common interest in clinging to power. They might be amenable to economic liberalisation and greater political freedom, but not to radical democratic transition.

And Stratfor believes the military junta will resist AU, US and other Western pressure to back down, because it has strong support from Saudi Arabia, the United Arab Emirates and Egypt which “all have an interest in keeping Sudan on their side to serve the war effort in Yemen, balance against Iran, and assist in the regional competition against Turkey and Qatar”. These powers would prefer the military to stay in power rather than ceding authority to a democratic civilian government which might profoundly change Sudan’s foreign policy stance.

Stratfor also says the junta has been able to count on the support of Russia and China, at least in the UN Security Council. Russia, it says, may fear that democratic reform could usher in a more Western-leaning government in Khartoum. Russia’s support mitigates the possibility of any UN Security Council sanctions against the junta.

“With little potential for compromise between the military and protesters demanding radical democratic reform, lasting instability in the form of demonstrations, repression and economic woes will likely shape the future of Sudan,” Stratfor says.

“Sudan’s prospects for a stable, democratic transition are growing dimmer by the day.” DM