Sudan at a crossroads: The leadership of the African Un...

Sudan at a crossroads: The leadership of the African Union needs to be stepped up 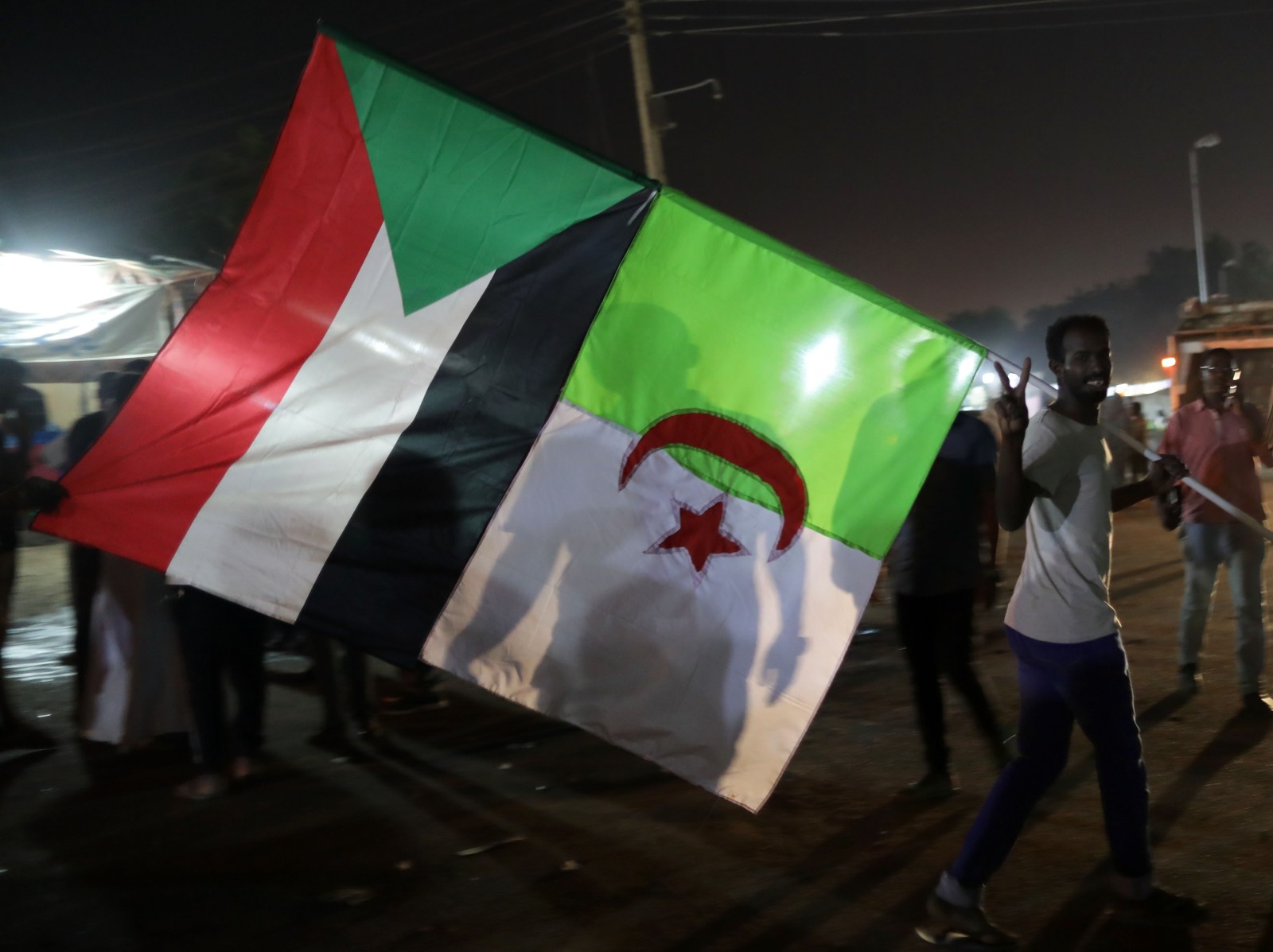 epa07593199 A Sudanese protester walks around carrying a Sudanese and an Algerian national flag sewn together in reference to the similarly ongoing protests in Algeria, at the site of a sit-in, near the Army headquarters, in Khartoum, Sudan, 22 May 2019. Sudanese protesters continue to flock to the sit-in site outside the army headquarters every evening, to share a Ramadan Iftar (fast break dinner), participate in debates, listen to various civil society speakers or discuss the political situation. Sudanese opposition groups and the army suspended their talk on early 21 May, as the alliance composed of protesters and opposition parties and the army disagreed on control of the transition period. The opposition would like majority civilian rule and state that the army would like it otherwise. Sudanese people started protesting in December 2018 against the rule of former President Hassan al-Bashir, who resigned on 11 April 2019. EPA-EFE/AMEL PAIN

In this particular time when the future of Sudan as a nation is hanging in the balance, it is imperative to take into account the needs and demands of those marginalised communities throughout the processes taking place in Khartoum. The continued exclusion of these communities represents a serious risk to the very existence of Sudan as a unified state.

When General Awad Ibn Auf from the Sudanese army announced the toppling of president Omar al-Bashir’s regime in April 2019, there was some sense of relief among the protesters who, for six consecutive days, had decided to remain in front of the military headquarters to witness the removal of one of the longest serving presidents on the continent. Subsequently, the army announced the creation of a Transitional Military Council endowed with the ultimate task of leading the country during a two-year transition period.

Following the downfall of al-Bashir, the protesters have been mobilising and agitating for the creation and establishment of a transitional government led by civilians. However, the negotiations between the representatives of the protest movement and the Transitional Military Council (TMC) have reached a stalemate after security forces attacked and killed dozens of protesters on 3 June 2019, an act which sparked international outrage. The number of victims of the attack differs, depending on the source of information. The government has recognised the death of around 50 people while the sources close to protesters said that more than 100 people were killed.

While the demands of the pro-democracy movement for new institutions which are not linked to the former establishment or to the military regime are clear and understandable, the criterion for the selection of the civilians who would lead the transition is not very clear. The Sudanese Professional Association (SPA) has emerged as the leading coalition for the protest movements and its representatives took part in the failed negotiations with the TMC. It is still difficult to measure the strength of the SPA as a political force capable of assuming national leadership and the extent to which it represents the interests of all Sudanese people including those in very remote areas, far from the capital city.

At the same time, it is necessary to keep in mind that the Sudanese society is very diverse in terms of ethnicities, religion, culture and languages. Some communities located at the periphery have been marginalised for decades and have from time to time expressed their grievances violently.

In this particular time when the future of Sudan as a nation is hanging in the balance, it is imperative to take into account the needs and demands of those marginalised communities throughout the processes taking place in Khartoum. The continued exclusion of these communities represents a serious risk to the very existence of Sudan as a unified state. Excluding them may lead to the fragmentation and possibly new secession movements, as it was the case with South Sudan.

The existing rebel movements in the Darfur and the Kordofan regions represent a source of instability, as they agitate for their rights, particularly in a context in which the central government is becoming increasingly weak. The emergence of extremist movements in addition to the existing rebellions should not be ruled out as well. This points to the fact that Sudan is on the precipice of an escalation of the crisis and urgently needs a clear road map towards stabilisation and a retreat from the abyss of violent conflict.

The regional bodies and the international community as a whole have no excuse for neglecting the situation developing in Sudan. There is a real possibility of Sudan becoming more unstable, and its disintegration would constitute a serious threat to regional peace and stability.

The Horn of Africa region where Sudan is located is already plagued by the Islamic extremism in Somalia and northern Kenya with the al-Shabaab group and ethnic clashes in Ethiopia’s Oromo regions as well as South Sudan’s political and ethnic violence. It is rightly considered an important hotspot in terms of insecurity. This means that the action of a transnational organisation such as the IGAD and the African Union should be stepped up in order to assuage the Sudanese crisis.

The intervention by Prime Minister Abiy Ahmed, of Ethiopia, the head of IGAD, may lead to the temporary suspension of open hostilities. However, much more needs to be done to address the underlying tensions generated by decades of political misrule and socio-economic marginalisation. Attempts to paste over the cracks appearing on the edifice of the Sudanese state will create a situation which will be more complex to solve with more destabilising effects.

The recent decision of the African Union to suspend the membership of Sudan until a civilian government is established has been lauded. However, it is clear that the sole suspension does not solve the real problems the Sudanese people are faced with. The African Union, despite a mitigated track record of successful diplomatic initiatives, should take the lead in facilitating the dialogue between the TMC and the protest movement. The two key actors currently are playing in the Sudanese political arena need support and assistance as they search for a solution to the issue around who is going to lead the transition and how the two forces could eventually co-operate in stabilising the country.

The AU leadership (along with regional and international organisations) is essential in helping political actors to find common ground and to discuss long-term strategies for the restoration and development of a post-al-Bashir Sudan. DM

Patrick Hajayandi is a Senior Project Leader at The Institute for Justice and Reconciliation working in the Great Lakes Region.