From mopane worms to MCC, squared – all in a week’s...

FIT FOR AN EMPEROR

From mopane worms to MCC, squared – all in a week’s ‘work’ 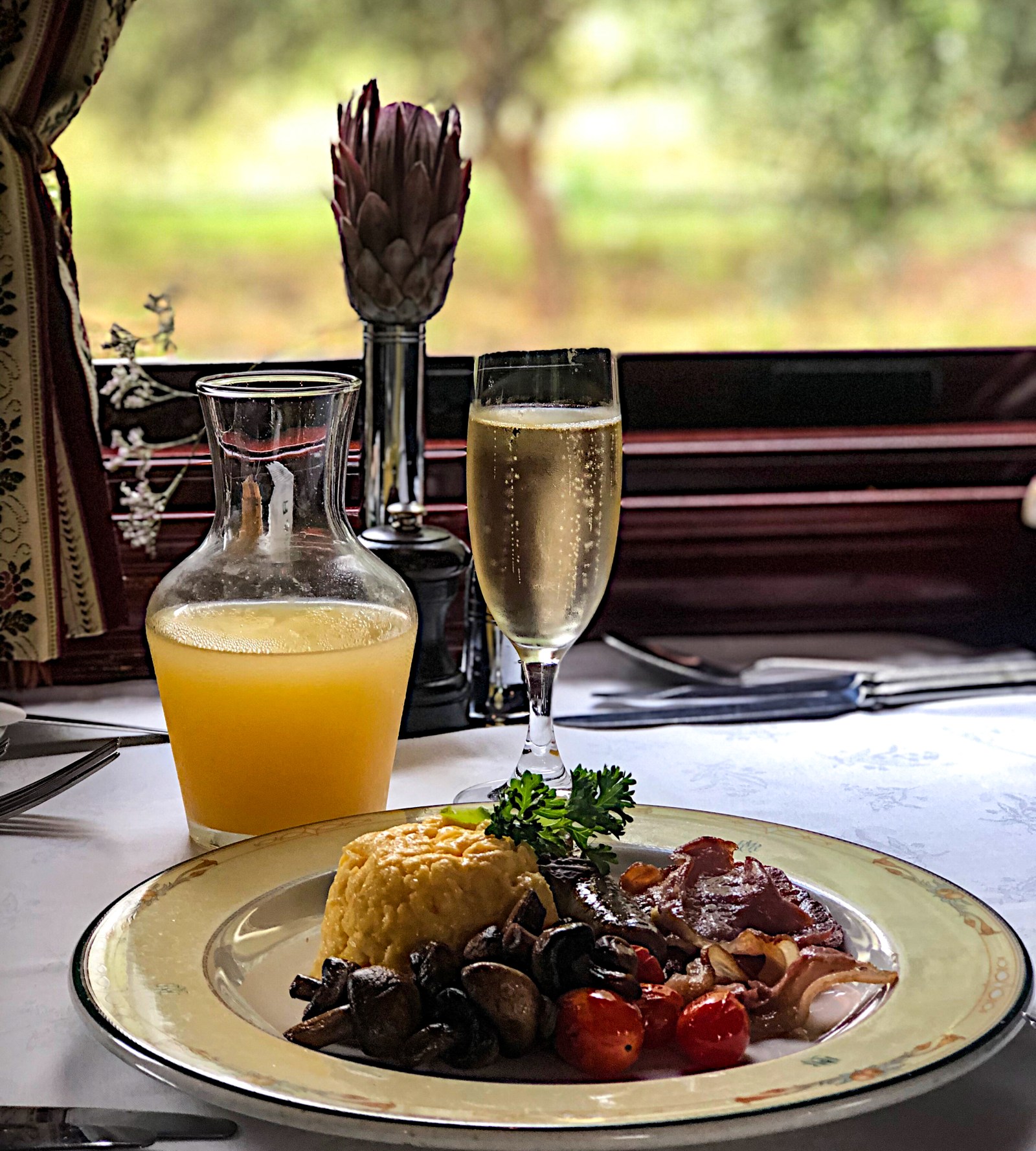 The nice thing about train travel is that you tend to lurch all the time so no one can actually confirm you’re tipsy. A spot of bubbly would have helped with the mopane worms a day or two earlier, come to think of it.

What we will or won’t eat is largely based on where in the world we live, as well as necessity.

South East Asia’s appetite for nose-to-tail delicacies far outstrips that of the West, where we think we are being super progressive because we eat sheep’s brains or pig’s trotters. Next time you’re in Japan, try shirako, which refers to the sperm sacs of either cod, angler fish or puffer fish. Apparently, they taste like sweet custard. If you didn’t grow up in the Philippines, you’ll probably balk at the idea of a balut – a fertilised duck egg, with its partly-developed embryo inside.

In southern Africa, mopane worms are eaten in abundance and are a rich source of protein. They’re not actually worms at all, but caterpillars – the larvae of the emperor moth known as Gonimbrasia belina. It has a wingspan of about 120mm, which is not a small flying thing. The caterpillars, when they are alive, are black with round scales in indistinct, alternating reddish, yellowish and whitish bands and they are armed with short reddish or black spines, which are covered in fine white hairs. This mental image has to make you wonder what made the first person decide this looked yummy and decide to eat one.

While they can be plucked directly off the mopane tree where their eggs hatch and they live forever – well, for this phase of their lives anyway – they are usually dried, fried, or used in a stew. Frankly, a stew can often contain suspect ingredients and we’d never know, but it takes a certain amount of conscious thought to make the leap to chowing down on the worm, which looks like a worm, when you’ve never done so before.

After I failed horribly in Thailand by not trying the crispy fried scorpion on a stick (“It’s your job – AND it’s low carb,” my mother admonished me across the continents on WhatsApp), I decided to take one for the team while staying at Royal Livingstone Victoria Falls Zambia Hotel by Anantara, to give it its full and unwieldy name.

My lovely editor had tasked me with a food story while I was there, and by the time the sun set so beautifully over the Zambezi and the thundering smoke of the falls could be seen in the distance, I had discovered the five-star hotel – described as legendary – to be sadly lacking in the cuisine department. Heck, our sundowner martinis arrived in margarita glasses with ice floating in them. Not since I first tried to acquire the taste for this classic cocktail have I had one so unpalatable.

Partly because of this, and partly because of the high markup on South African wines, I can’t even claim to have ordered the worms on a drunken whim. It was done deliberately, but certainly not easily. When the moment arrived, however, I alarmed myself at how effortless it was to just think “okay, what the hell, here goes” before popping the thing in my mouth. I cannot help but wonder what other stupid things I might do, with that attitude.

The worms were utterly underwhelming. Crunchy at first, they then dissolved into flaky bits that coated the inside of my mouth and were difficult to swallow without a swig of expensive wine.

“I think it’s maybe because of how they have been served,” said my friend helpfully, watching but not participating.

Maybe so, but honestly, I don’t care enough to pursue this. What was more interesting to me was the chikanda, described on the menu as African polony. It does indeed have the texture and taste of that dubious luncheon meat but it is a plant-based snack, made by combining orchid tubers, ground peanuts and chillis. Sadly, millions of orchids have to die annually to sustain this product. Vegans, what do you have to say about this?

The third item on my African Trio platter was locally sourced crocodile salad. This really does taste like chicken and is entirely unremarkable. Overall, it was a disappointing experience of what is perceived to be an exotic and adventurous culinary adventure.

My fortunes were soon to improve, however. The following day we travelled back to Zimbabwe to the Victoria Falls Hotel where we boarded the Rovos Rail train bound for Pretoria, a three-night journey.

Not only is this undertaken in spectacular luxury, but all your beverages are included (except for Champagne). This means I spent almost the entire time with a glass of something in my hand; mostly local MCC, sometimes wine, sometimes other drinks. The nice thing about train travel is that you tend to lurch all the time so no one can actually confirm you’re tipsy.

In between drinking – and with drinking – there is eating. With no WiFi or televisions on board, there isn’t much else to do except read a book, watch the scenery go by, and avoid the other passengers as much as possible. Some people go on these trips to make friends. I’m not one of them. Not until I’ve had enough bubbly, that is.

Breakfast, lunch and dinner are all multiple-course affairs, with afternoon tea in the lounge car every afternoon.

The menus are impressive, with each dish paired with a South African wine. On top of the already exceptional food coming out of the tiny galley, I threw a low-carb, low-sugar dietary requirement at them. This was honoured at every meal, and any lapses were at my own discretion; those profiteroles were fabulous and surely that tiny bit of choux pastry doesn’t contain too many carbs, right? Vegetarian options are available.

For example, a lunch menu will begin with salmon gravadlax with caper berries and a wholegrain mustard and horseradish cream, with a glass (or as much as you want) of Thelema Sutherland Rhine Riesling. This is followed by springbok loin served on wilted spinach, with baby corn and a polenta cake with a plum jus. The wine is Lanzerac Pinotage. Every meal had a different cheese course, served with various fruits and crackers. Dessert on this day was a duo of Champagne sorbet paired with Le Lude Brut.

On the first night, dinner began with tomato and mozzarella with fresh basil and a balsamic reduction with Vergelegen Sauvignon Blanc, and a main course of confit duck on crushed new potatoes, braised red cabbage, green beans and an orange reduction, with Thelema Merlot. Dessert was pot de crème with berries, pistachios and a mascarpone quenelle with hazelnutty Frangelico liqueur.

Passengers are required to dress for dinner every evening – ties and jackets for the men, women to fall in accordingly. A gong is rung at 7.25pm to summon you to the dining carriage. On the last night of the journey, things are even grander, with candles on the tables and wine steward Edward and waiter Solomzi in tuxedos and bowties. Their colleague Precious was there with a platter of rose boutonnières.

The menu began with slow-roasted tomato pastries with Brie and basil pesto drizzled with a balsamic reduction (also surely no carbs?) with Pierre Jourdan Tranquille. The main course was gratinated crayfish tail (worryingly small) with green beans and savoury rice with a caper beurre blanc, paired with Bouchard Finlayson Sans Barrique Chardonnay. After the cheese (Camembert with a black cherry and Amaretto compote) and dessert (yoghurt and vanilla-pod panna cotta with rose-petal jelly), everyone was invited to the lounge car for cocktails and a farewell party which I am told went on till 2am.

Me, I was in my deluxe suite finishing my book and another bottle of bubbly – and no flaky bits of mopane worm for it to wash away this time. DM