The doomed migrant ship Barca Nostra (Our Boat) was opened to the public at the 58th La Biennale di Venezia in Italy this past weekend. One of the supporters of the project explains why the world can no longer ignore the collective failure Barca Nostra symbolises.

All photos by Barca Nostra

On 18 April 2015, the Mediterranean’s deadliest shipwreck in living memory occurred 96km off the Libyan coast and 193km south of the Italian island of Lampedusa in international waters. There were only 28 survivors and between 700 and 1,100 people died.

The fishing boat, which would normally have a crew of 15, was carrying an average of five people a square metre, migrants locked up as the ship’s ballast in the hold and machine room. After colliding with a Portuguese freighter attempting to come to its rescue, the boat sank with its imprisoned human cargo.

This tragic event occurred at a time when the European Union was implementing Operation Triton with the aim of maintaining the European border in the Mediterranean. Following the European Union’s decision to end Operation Mare Nostrum, the rescue of boats in distress, previously at the expense of Italy and the European Union, was left to the normal rules of navigation which impose on any type of ship closest the task of providing assistance to those in difficulty. 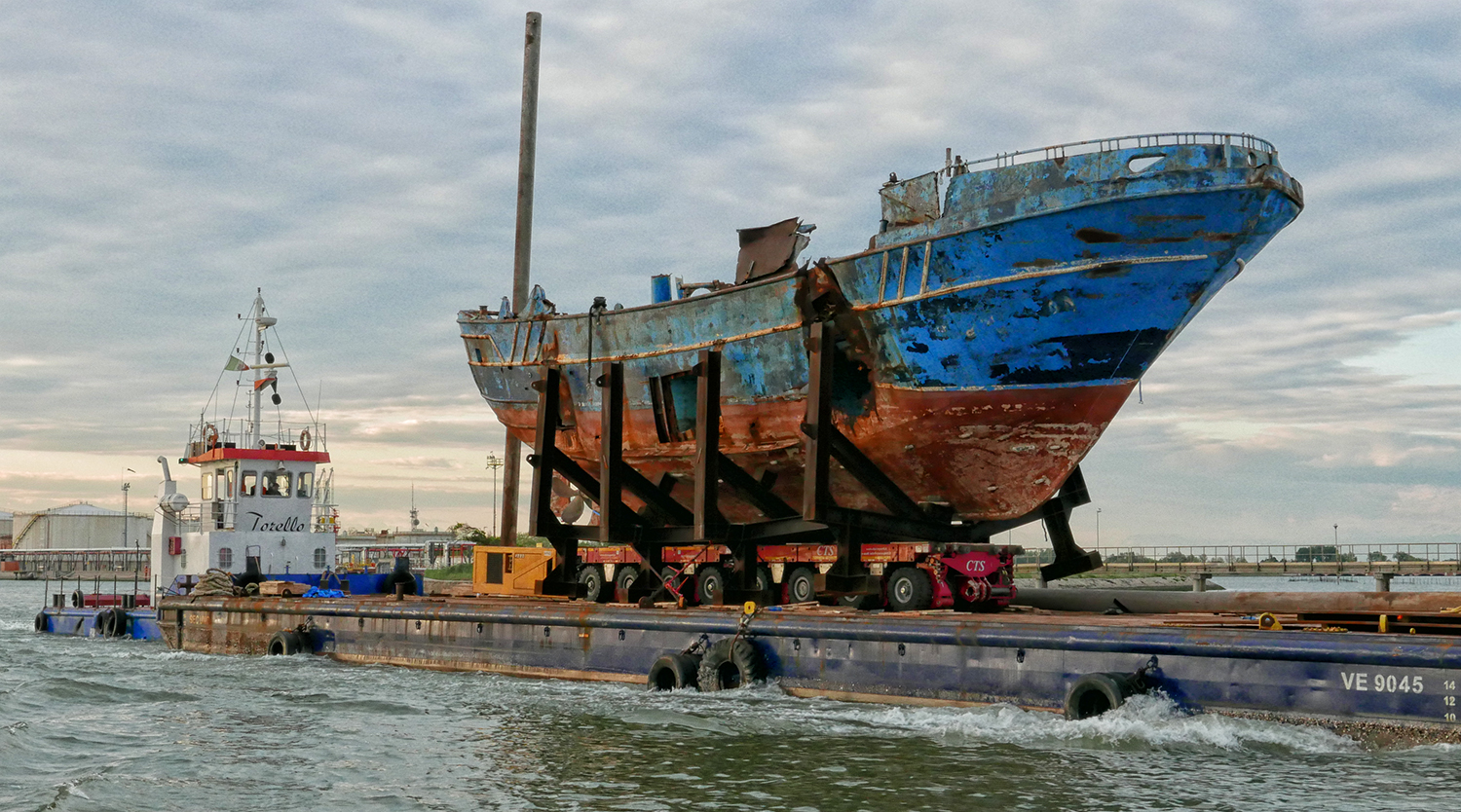 The Italian government decided to retrieve the shipwreck at a cost of €9.5-million and initiated an investigation of the remains of the deceased in order to give them back their identities and to provide authorities with the ability to inform their families. On 30 June 2016, the shipwreck was – after an initial unsuccessful attempt in the same year – recovered from the seabed by the Italian Navy at a depth of 370m. It was transported to Sicily, where removal and identification of the hundreds of bodies still imprisoned within its hull began.

In October 2016, Italy’s Prime Minister Matteo Renzi proposed bringing the shipwreck to Brussels and warned that Europe must take responsibility for the “scandal of migration” so that similar tragedies do not occur in the future.

Exactly four years after the tragic shipwreck, the boat was released on 18 April 2019, destined for Venice, a city believed to have been founded by fleeing refugees. For the duration of the 58th La Biennale di Venezia, a contemporary visual art exhibition held every two years, the ship will bear witness to the thousands who have died attempting to cross the Mediterranean. 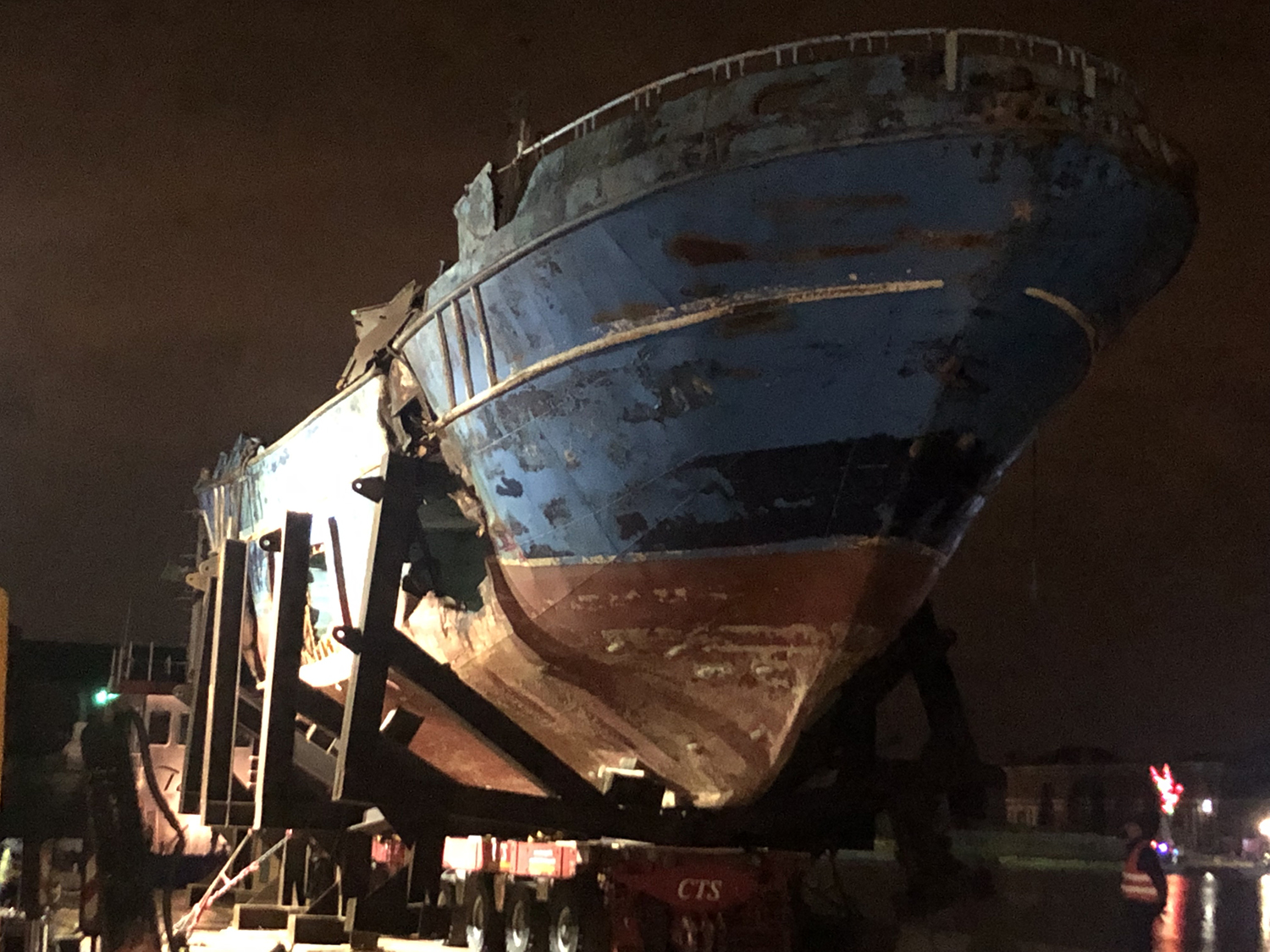 According to the Swiss artist Christoph Büchel, who has installed the ship in Venice, the vessel has become “a symbolic object, dedicated not only to the victims of the tragic event in 2015 and the people involved in its recovery, but to our mutual responsibility representing the collective policies and politics that create such wrecks”.

The artistic director of the 2019 Biennale, Ralph Rugoff, commenting on what has been described as “the most searing element in the entire show” has stated “it is one thing to see an image in a newspaper or on television, but when you confront the physical thing you have another whole group of sensations, you feel it in a different way… processing information in a different way, hopefully that gets you to think in a different way”.

The shipwreck, accessible to the public from 11 May, is haunting. The wreck, renamed Barca Nostra (Our Boat), is a mass grave more than a conventional work of art and is designed to elicit emotion as well as reflection. It is called Our Boat because it is not owned by the artist, the Biennale or the Italian state. It bears witness to our collective failure and culpability.

This migration crisis goes on unabated. At least 65 migrants from sub-Saharan Africa drowned off the coast of Tunisia the day before Barca Nostra was opened to the public. According to the UN, in 2018, six migrants and refugees died every day trying to cross the Mediterranean. This is to say nothing of those who died en route to North Africa, fleeing conflict, corruption, lack of opportunity and state collapse.

The Barca Nostra confronts us with something we would rather ignore. While the dead come from many countries, most come from Africa. And tragically, many die before they reach the Libyan coast. Those that do not are often subjected to cruel and degrading treatment, including being sold as slaves in Libya for as little as $400.

In a recent interview a Nigerian woman who had abandoned her attempt to reach Libya said:

“No girl (female) is spared. If you are a girl, you will be raped and sexually assaulted. All I could do was pray that I wouldn’t get HIV, because the kidnappers were not using a condom. That was my prayer. As soon as we were brought back to Nigeria, I wanted to know my (HIV) status, because many people are HIV positive. The majority of the people who come back HIV positive were infected due to the rape and forced sex abuse they experienced.”

Barca Nostra’s are far from the only victims.

Many in Europe would echo the recent statements of US President Donald Trump:

“Our country is full. We can’t take any more.”

But away from the polemics, demography raises important questions. According to the UN, more than half of global population growth between now and 2050 is expected to occur in Africa. With the continent’s youth unemployment rate exceeding 30% in 2019, the incentives to seek opportunity elsewhere will grow.

Over in Europe, the total population of the EU is projected to decrease from today’s 505 million to 465 million by 2100. Far fewer of these people will be of working age, with the number of those aged 65 or over growing from 19% currently to 30% by 2050.

The net result is the attraction of irregular migration to Europe which will grow as a result of both push and pull factors.

And as such, the Barca Nostra will not be the last ghost ship and will remain a monument to our collective failure to manage migration and promote equitable, inclusive growth and opportunity in the source countries of migration in Africa. DM

Alistair Harris is a former UK diplomat and the CEO of ARK Group, a development company operating in fragile and conflict-affected countries, including on issues relating to refugees and migration. Alistair is supporting the Barca Nostra project.