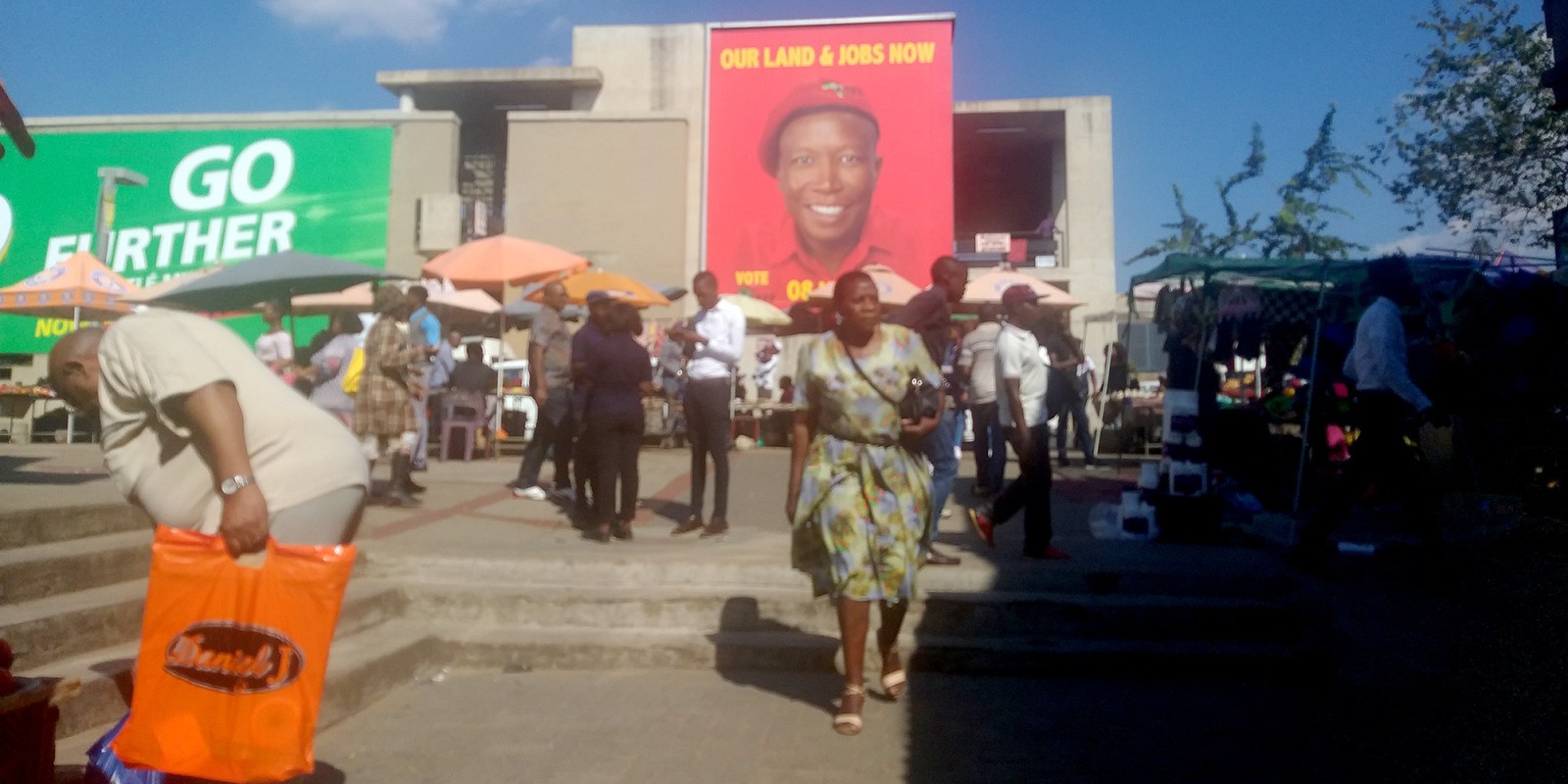 People shop at the Baragwanath Taxi Rank in Soweto on the eve of the elections, 7 May 2019. A huge poster of EFF leader Julius Malema beams in the background. Photo: Bheki Simelane

As South Africa embarks on what many analysts are calling the country’s most crucial elections yet, anxiety, ambivalence and some excitement have Soweto in their grip. We visited one of Soweto’s main getaway taxi ranks, the Bara Taxi Rank to gauge the mood.

The most obvious interaction with South Africa’s elections moment at one of Joburg’s busiest taxi ranks is with the different political parties’ election campaign posters. The ANC, EFF and the DA election posters dominate while smaller parties are hardly noticeable and are few and far between.

Anticipating that the taxi rank would be a hive of activity, some hawkers say they stocked new items which were not selling very well. The Bara Taxi Rank is indeed a hive of activity as people from all walks of life mingle for various purposes, related and unrelated to the elections.

“We will win. Even all my customers are confident that the ANC will win. If you hang around my stand I can assure you that you will capture ANC supporters’ victorious mood. Look around this whole area and you will notice which political party T-shirts are most common among patrons,” said 28-year-old Castro Maswanganyi from Diepkloof.

A woman wearing an ANC T-shirt inscribed with “Nokuthula Simelane Volunteers” turns up in a taxi headed for Diepkloof Square: “We are going to mobilise there for tomorrow. There is no more time left. We need to convince a few more South Africans and secure their votes for tomorrow,” she says.

As she takes the front seat, a branded ANC bakkie shows up. It’s strapped with a number of loudspeakers on the sides and is moving slowly while the speakers rattle through everyone’s eardrums.

Asked if he sees nothing wrong with his act of peeing on a lamp post with the three political leaders’ faces, the taxi driver replies that he has no respect for all three men. “Azilutho kimina lezigebengu,” he says, meaning “these thugs mean nothing to me”. He adds: “I left starving kids at home because of all their lies and empty promises. I will pee wherever I want. If the posters were not so high, I’d pee right in their faces.

“If you see them tell them I will not vote,” he says, arrogantly.

The election posters are on display on every lamp post in the area. Election posters of the Women Forward Party are also common, but most barely hang from the lamp posts on which they are strapped while those of bigger parties like the ANC, EFF and DA are mostly still intact. Many EFF posters have turned from red to white from being exposed to extreme weather conditions.

Some election posters with President Ramaphosa’s face have been destroyed and replaced with a certain pastor Mukhuba’s church posters. Some South African Communist Party posters are also lying among trash in dumps in the area.

Neli Sibanda, who is also a hawker at the Bara Taxi Rank, says despite the elections hype all around Bara, her sales from the ANC regalia she sells at her stand have not picked up. Sibanda says she suspects that this is because there are many other hawkers selling the same items.

Aphiwe Adebe, 18, a student at the Funda Centre in Bara says: “I am not going to vote. As a matter of fact I see all the hype, but I have no interest in politics or voting. I feel like all the parties are corrupt. Even if there is change, it is too minimal to make meaningful change in people’s lives. For me tomorrow is just a holiday and I’m happy to have some rest.”

But 28-year-old Lebogang Setshedi of Soweto says: “I will most definitely vote. There is so much hype around this election and I think the reason for that is because the country has a new president and will have a new president again in a few weeks. The giant that is the ANC seems to have awoken this time.”

Mindos Mashaba, 56, also says that despite the bustle at the Bara Taxi Rank, he is disappointed because he hasn’t noticed an improvement in sales of political parties’ regalia: “I’m not sure why this is the case. It might be that people already have the items I sell.”

“Tomorrow is the big day but it will find me here playing dice,” says Dumisani Tshabalala from Diepkloof Zone 5. “I gamble. I play dice here every day so that I can buy my children some bread. It’s a win or lose situation, but it’s better than waiting on thieving politicians.”

Aventina Mthombeni, a 41-year-old hawker from Diepkloof Zone 2 echoes the sentiments of her colleagues: “There are more people but no money,” she says. Mthombeni says she is not making any more sales from political party regalia. She says she thinks the reason for this is that many of her colleagues sell the same items.

Lucky Sibiya, a taxi driver from Soweto, says the busy movement of people is annoying because he is not making any more money than he usually does. “I still get the same from my trips so there is nothing to be excited about.” DM

On the Ground (part 2): South Africans finally get to have their say

Festival atmosphere at final ANC rally – but not everyone was listening