DA Phetogo final rally: Party has its faults, say supporters, but it’s time to give it a chance 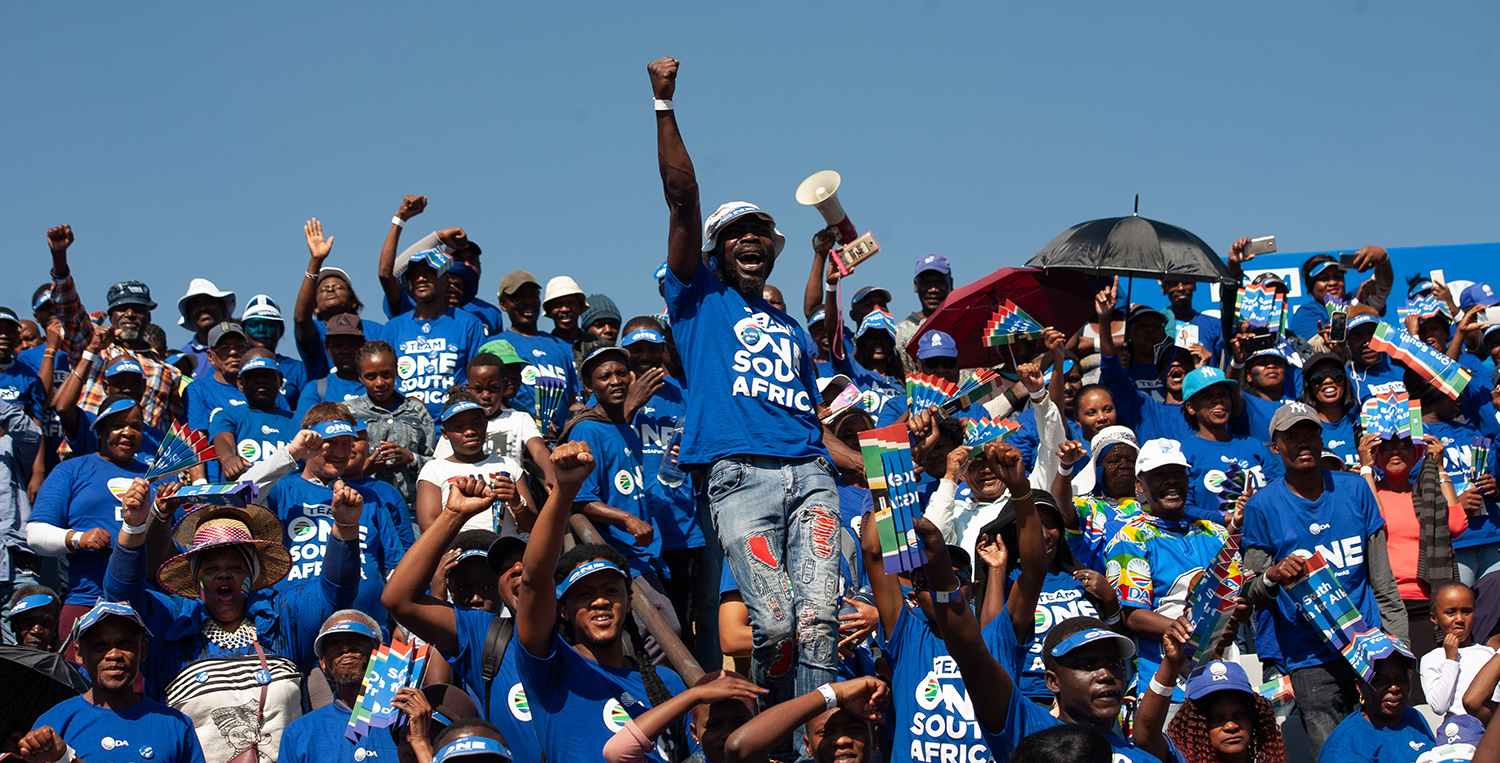 DA supporters fill the Dobsonville Stadium on Saturday 4 May for the party's final rally before the 2019 elections. (Photo: Greg Nicolson)

The Democratic Alliance held its final rally at the Dobsonville Stadium in Soweto. For some supporters in attendance, the party is far from perfect, but they believe it is their best option.

On Saturday thousands of Democratic Alliance (DA) supporters descended on the Dobsonville Stadium in Soweto to mark the party’s final rally before the country heads to the polls on Wednesday. Despite openly pledging their allegiance to the party, some supporters still say it could do more to improve their lives now.

Speaking to Daily Maverick outside the Dobsonville Stadium in Soweto, DA supporters said the party’s leaders were not doing much to protect their interests.

“My shack will be the first to be burnt down. ANC people are insulting me and threatening to burn down my shack because I’m a DA supporter,” said Dineo Lebake from the Vaal.

Lebake, whose work for her community involves helping residents with various services, including helping them obtain proof of residence documents, said she had endured insults and been called names, such as being her councillor’s “tea girl” by members of the community. She says she has received no support from her party.

“All I’m asking for from the party is support and protection,” said Lebake.

Augustine Mpewa, 31, said voters who did not see the change that the DA was bringing to areas where they governed were “blind or ignorant”.

“What has the ANC done and for whom, apart from stealing from the poor? Listen here, I love the DA,” she said.

But despite her love for the party, Mpewa was not entirely happy, because she was still unemployed. Mpewa said she dumped the ANC in 2016 after the party used her and failed to give her the job she was promised. She said she was not happy that some DA councillors, including her own ward councillor, were not prioritising their own members, unlike ANC councillors who prioritised their party’s supporters.

“I expect more from the DA because it’s the only party with clear policies. I have been insulted for my support for the DA, and feel that the party should do more to look after our interests,” said Mpewa.

As party leader Mmusi Mamaine spoke about how the DA would provide jobs and opportunities, several DA supporters confirmed that their main concern was jobs.

Over the past year, the DA has been criticised for what many call its political opportunism and its constant criticising of opposition parties.

“That’s rubbish. The DA is a political party and there is nothing wrong about the DA constantly criticising opposition parties. We are an opposition party, not ANC’s stooges,” said 49-year-old Gregory Tladi from Soshanguve in Pretoria.

Tladi said the DA was the only party capable of bringing change to South Africans because the party boasted inclusive policies.

“The DA will make everything better. They will do everything differently. People should give the DA a chance. We all make mistakes and the DA is no different. The DA deserves a chance,” Tladi said.

Ntombi Mahlangu, 34, from the Vaal, called on her party to focus on job creation, saying people needed permanent employment. Mahlangu is a contract worker, but the contract is about to end — a great concern for her as she was her family’s breadwinner.

Joseph Minda from Meadowlands said he could not care less about what other parties were saying. He said the ANC had failed over more than two decades, but there were still those who believed that the party was committed to the needs of South Africans.

“The DA has its own mistakes, but those do not stretch as far looting your own country like the ANC has done over the years. Those who think the ANC will deliver are just deceiving themselves. How is it that after all these years the ANC still asks for forgiveness and promises to do better? My vote goes to the DA. I like the party’s spirit of preaching inclusiveness,” Minda said.

Asked what he thought the DA would do differently if the party were to ascend to power, 71-year-old, Moses Joko from Dobsonville said the party would be a breath of fresh air, as it would turn around the country’s ailing economy and provide jobs.

Joko said after more than two decades of ANC rule, he could not point out a single thing the party had done for him. Joko added that the DA deserved a chance.

“People should give the DA a chance, because in the last two years that the party has been in power in some areas of Gauteng, a lot has improved.” DM

‘Cyril Ramaphosa will not finish his term of office’ - Julius Malema

Tense wait for KZN politicians as results dribble in