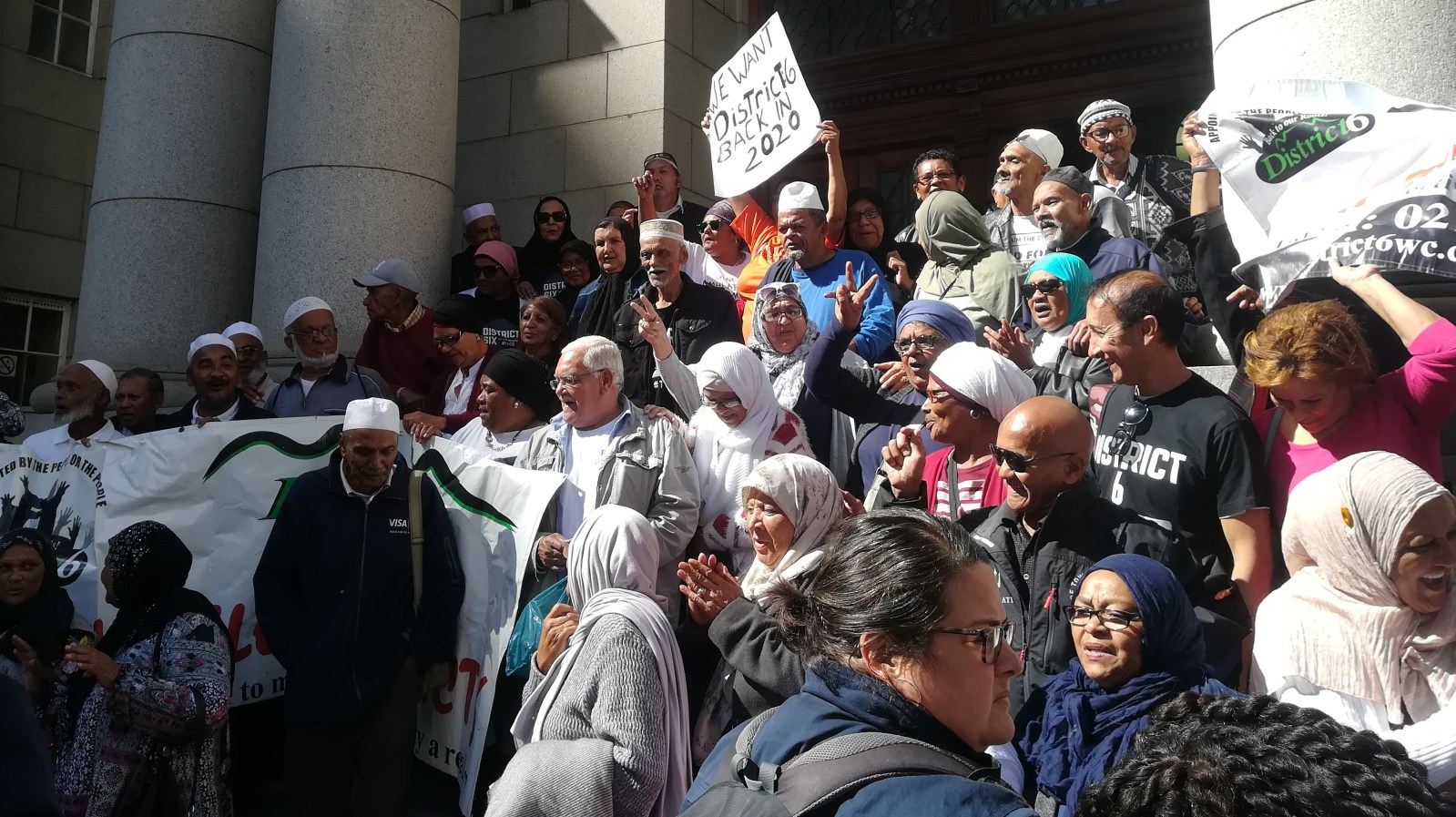 Former residents of District Six celebrate a victory in their demands for information about housing development at Cape Town High Court on 17 April 2019. Photo: Tessa Knight.

Standing on the steps of the Cape Town High Court, residents of District Six who were forced out of their homes more than 50 years ago chanted ‘we are going home to our land of District Six’, after a judge ruled that Rural Development and Land Reform Minister Maite Nkoana-Mashabane will have to appear in court in May to explain why housing restitution has taken so long in the inner-city area.

Read previously on Daily Maverick: Keep politics out of District Six, say claimants as they head to court this week

The claimants are former residents of District Six who are still fighting for access to houses in the area, 20 years after lodging an application.

The court sat on Wednesday to hear the case after Rural Development and Land Reform Minister Maite Nkoana-Mashabane failed to deliver an adequate report on the plans for housing projects in District Six.

In 2018, the District Six Working Committee, in conjunction with law firm Norton Rose Fulbright launched an interdict against the Department of Rural Development and Land Reform, calling for the Department to admit it had failed the people of District Six.

In a November 2018 court case, Nkoana-Mashabane’s legal representatives conceded that the Minister would supply a report by February 26 outlining the budget, time frame and specific plans made for the restitution of the area. Although a report was filed on the specified date, according to Acting Judge Tembeka Ngcukaitobi, it is common cause that the report filed did not include the required information.

According to Rachel Lailey, Content Manager at Norton Rose Fulbright, “The state did not file papers in time in response to this application but rather responded with a last-minute application for a postponement, citing a change in the Minister’s legal team as the reason for the request.”

“We say with great respect that it’s time for the Minister to explain herself,” said Advocate Geoff Budlender, who is representing the claimants of District Six pro bono. Although repeatedly told to remain silent, the complainants, many of whom are now in their 60s and 70s, softly applauded the Advocate’s statement.

The Minister’s legal representative’s request for a postponement of the case was denied with costs.

The state did not file papers timeously in response to this application but responded with a last-minute application for a postponement, citing a change in the Minister’s legal team as the reason for the request.

Now, Nkoana-Mashabane will have to personally supply a responding affidavit by 6 May and appear in court on 17 May. Acting Judge President of the Land Claims Court Shehnaz Meer and Acting Judge Tembeka Ngcukaitobi ruled that the Minister will have to prove why she should not be found in contempt of court for not complying with the November 2018 ruling. She will also have to explain why she should not personally pay for the costs of the case, as well as supply the information required by the original ruling.

“We want to know what the plan is, when it will come into being, when it will be executed, where the money will come from and when our people will get to go home,” Nicki van ‘t Riet, a director at Norton Rose Fulbright, told members of the press after the ruling.

“Restorative justice will come to the people of District Six.”

Many of those present on Wednesday have been waiting for housing for more than 20 years. In December 1998, 2,760 land claims were lodged with the Land Claims Commission, with 1,449 claimants opting to accept financial compensation. Of the 1,201 people who chose to return to District Six, only 139 have received housing units.

Jasmina Daniels, a 59-year-old who currently lives in Mitchells Plain, told Daily Maverick that she is overjoyed and overwhelmed by the ruling.

“This is a very big thing for us, to go back. I know it won’t be the same, but maybe our lives will be different. Our children don’t get work and to live in the city, I think that will be the biggest opportunity. I will be so glad because at least we can uplift our children.”

Daniels was forced to move out of her home when she was 10 years old under the apartheid Group Areas Act, which saw the vibrant community of District Six converted into a whites-only area. Most of the residents of the area were forced to move to parts of the Cape Flats, such as Manenberg and Hanover Park.

“We just want to go home,” said Daniels. “We want our community back.” DM