Zimbabweans struggle to to recover from Cyclone Idai 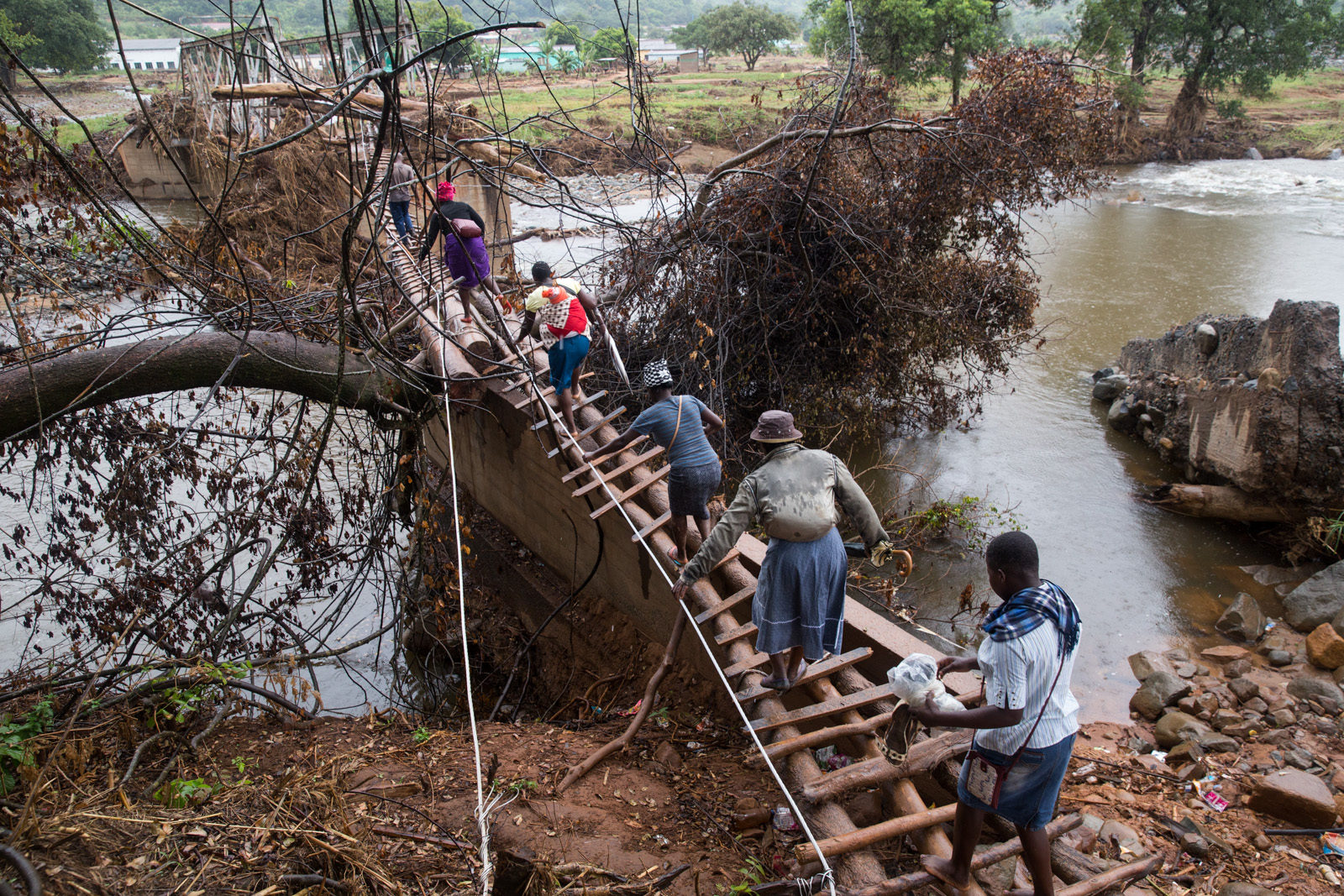 Residents cross a makeshift bridge in Copa where 63 houses disappeared under mud and rocks brought downstream by Cyclone Idai’s torrential rain. A further 38 houses were damaged. Residents estimate about 200 people were washed into Mozambique. Only one of the bodies recovered has been identified. (All photos by Ashraf Hendricks unless otherwise indicated)

Crops have been destroyed. And where houses once stood there are now rocks. Text by Steve Kretzmann Photos by Ashraf Hendricks for GROUNDUP.

On 15 March, Cyclone Idai slammed into the Chimanimani Mountains that form the border between Zimbabwe and Mozambique. Torrential rain and sustained winds of up to 190km per hour flattened the low-lying area between Beira in Mozambique and the Zimbabwean border. It set off landslides in the Zimbabwe highlands that have altered the landscape.

Officials in Zimbabwe estimate that over 2,250 houses were washed away or damaged, leaving over 4,000 people displaced. Entire sections of settlements have completely disappeared, with massive rocks where houses had stood. The bodies of their occupants were washed away into Mozambique by the floodwaters. 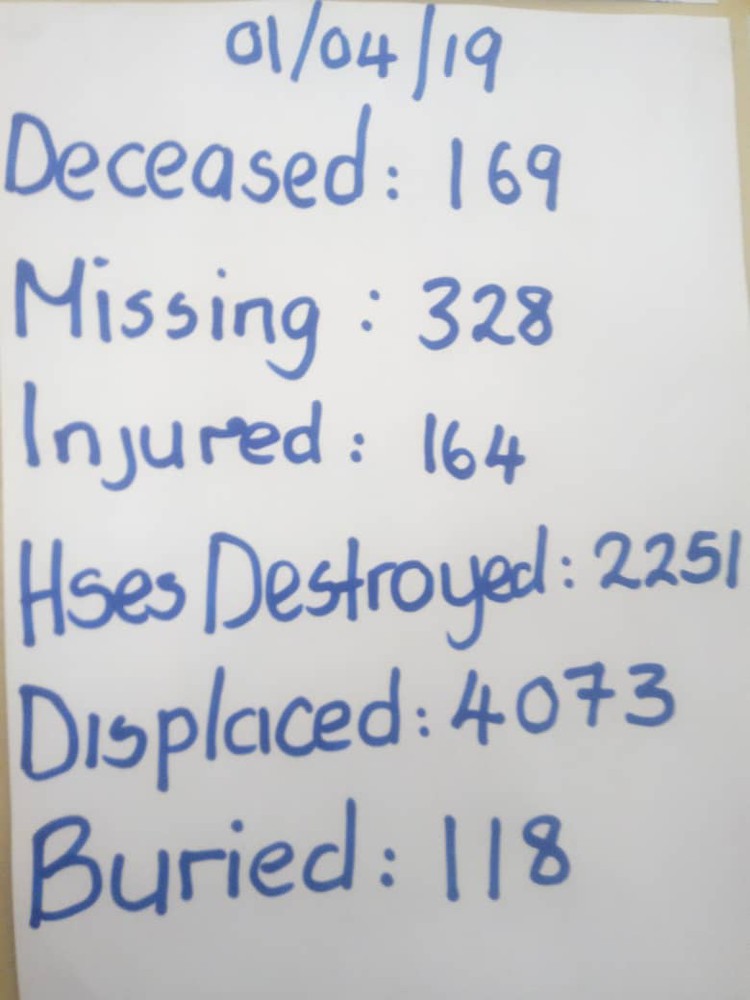 Cyclone Idai swept through Mozambique and into Eastern Zimbabwe. The photos in this story are from Eastern Zimbabwe in the area Mutare in the north of the map to Chipinge in the south. Map from OpenStreetMap. 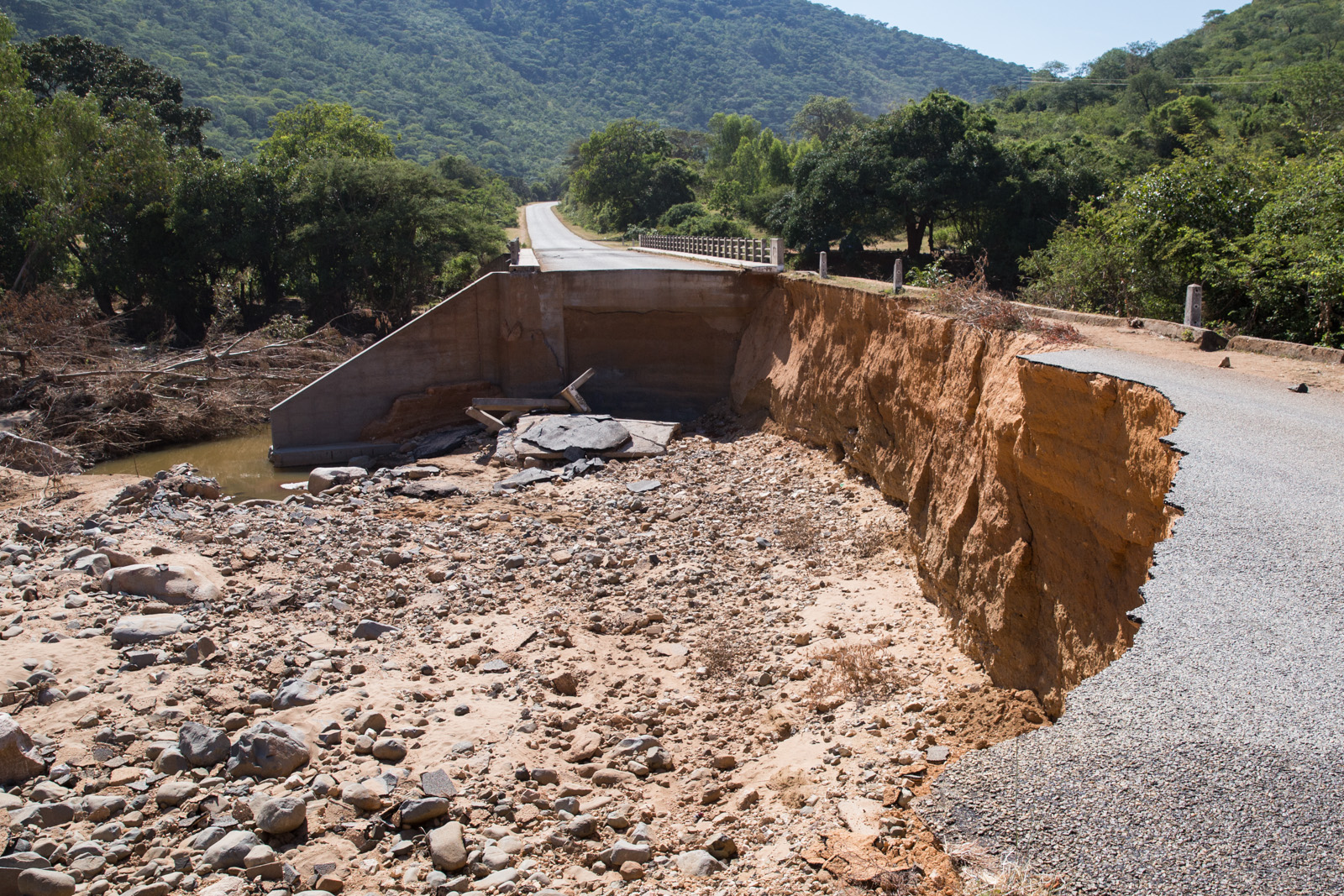 The first bridge on the most direct route between Mutare and Chimanimani, across the Umvumvumvu River, has been destroyed by flooding from the cyclone. Workers said this bridge could take about three weeks to rebuild. All traffic and aid from the provincial capital of Mutare to Chimanimani had to initially take an alternative route which added 70km to the journey in a country with the highest fuel price in the world (approximately R47 per litre according to GlobalPetrolPrices.com).

Rocks and mud now rest where houses used to stand and families used to live in Ngangu, a high-density area in Chimanimani. Surviving residents described the noise of the cyclone as deafening thunder, or compared it to the sound of a helicopter landing. Losses in Ngangu itself are unknown, but residents said 49 people from Ngangu were buried in the local cemetery and Chimanimani Heroes Acre. It took three days before the first help arrived. 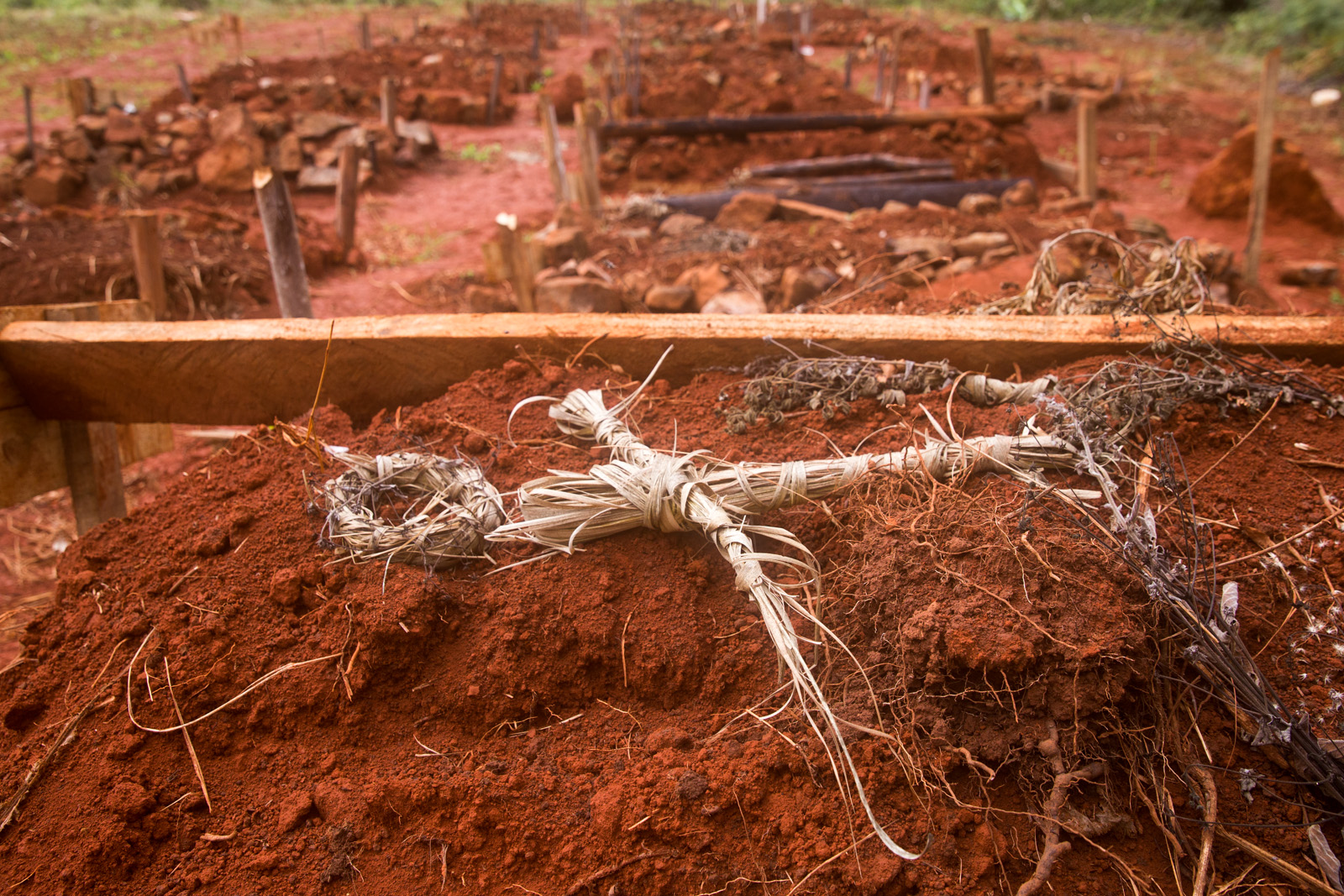 Over 30 new graves have been dug in Heroes Acre in Chimanimani for the dead from Ngangu and other Chimanimani settlements. Residents said graves hold two bodies, sometimes even three. 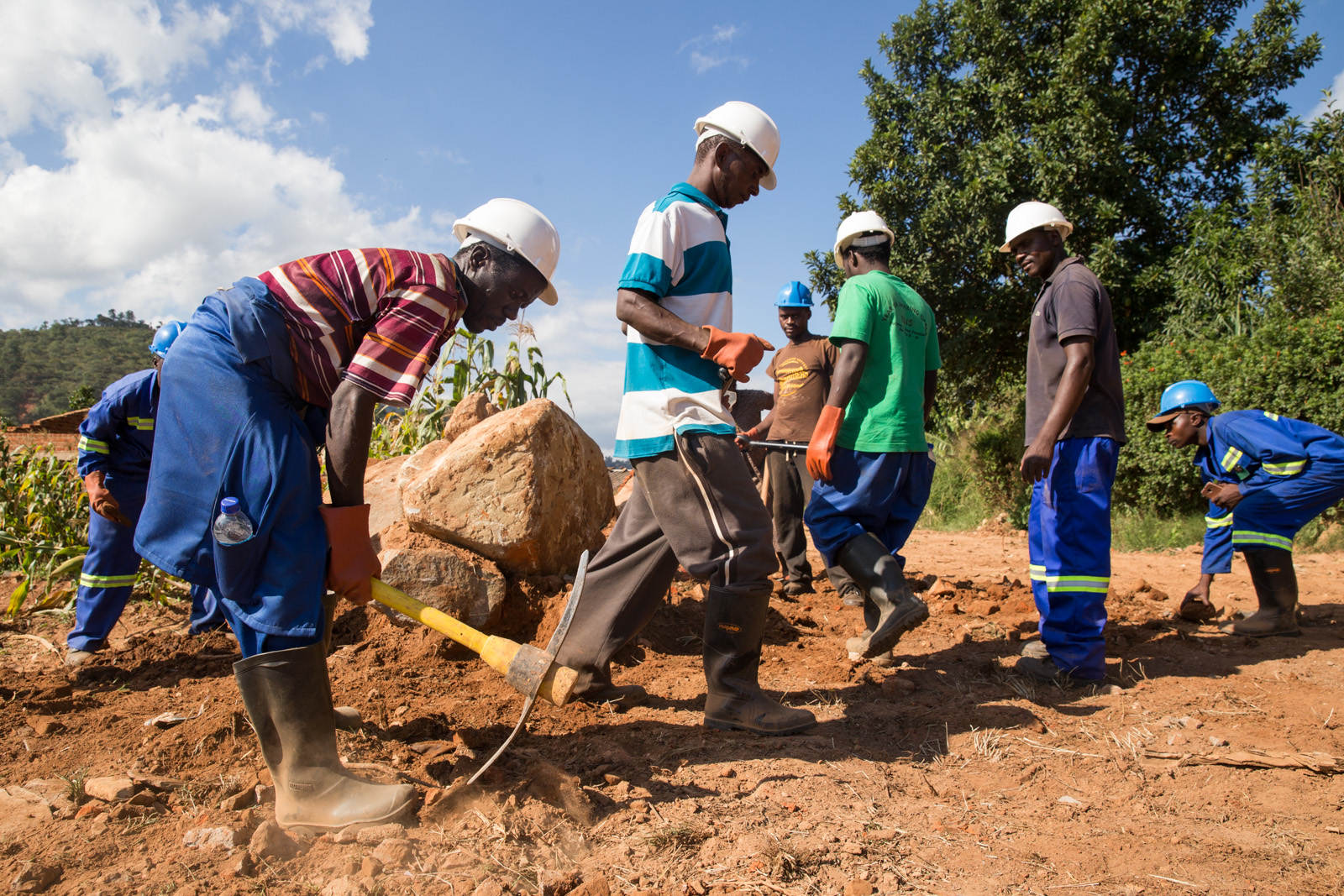 Workers contracted by the Zimbabwean government clear roads for access into Ngangu in Chimanimani.

Blessing Matambo came to work on Mzvuzvu Bangedzai’s six-hectare plot of land outside Biriri three weeks ago after crops were destroyed by flooding and equipment washed away. Bangedzai said 70% of the maize crop, which was ready to harvest, was destroyed. Avocado, lemon and banana trees were also swept away, along with his irrigation system and piping. 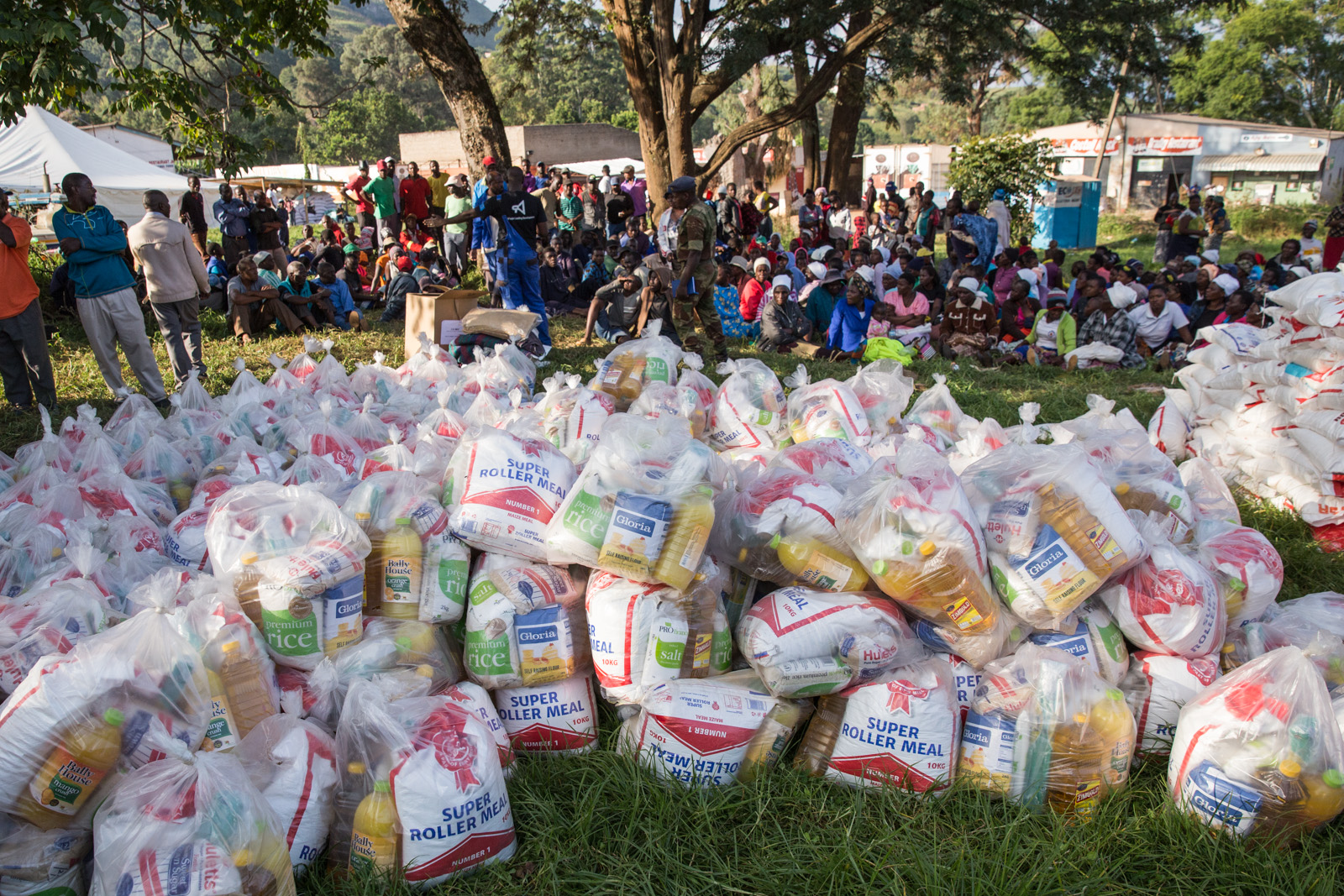 Displaced residents wait for aid at a government-run checkpoint in Chumanimani. The aid package consists of blankets, maize meal, oil and sugar, as well as candles and soap. Residents seeking aid, many of whom are mothers with young children, start gathering in the morning and wait hours before the packages are distributed in the late afternoon. 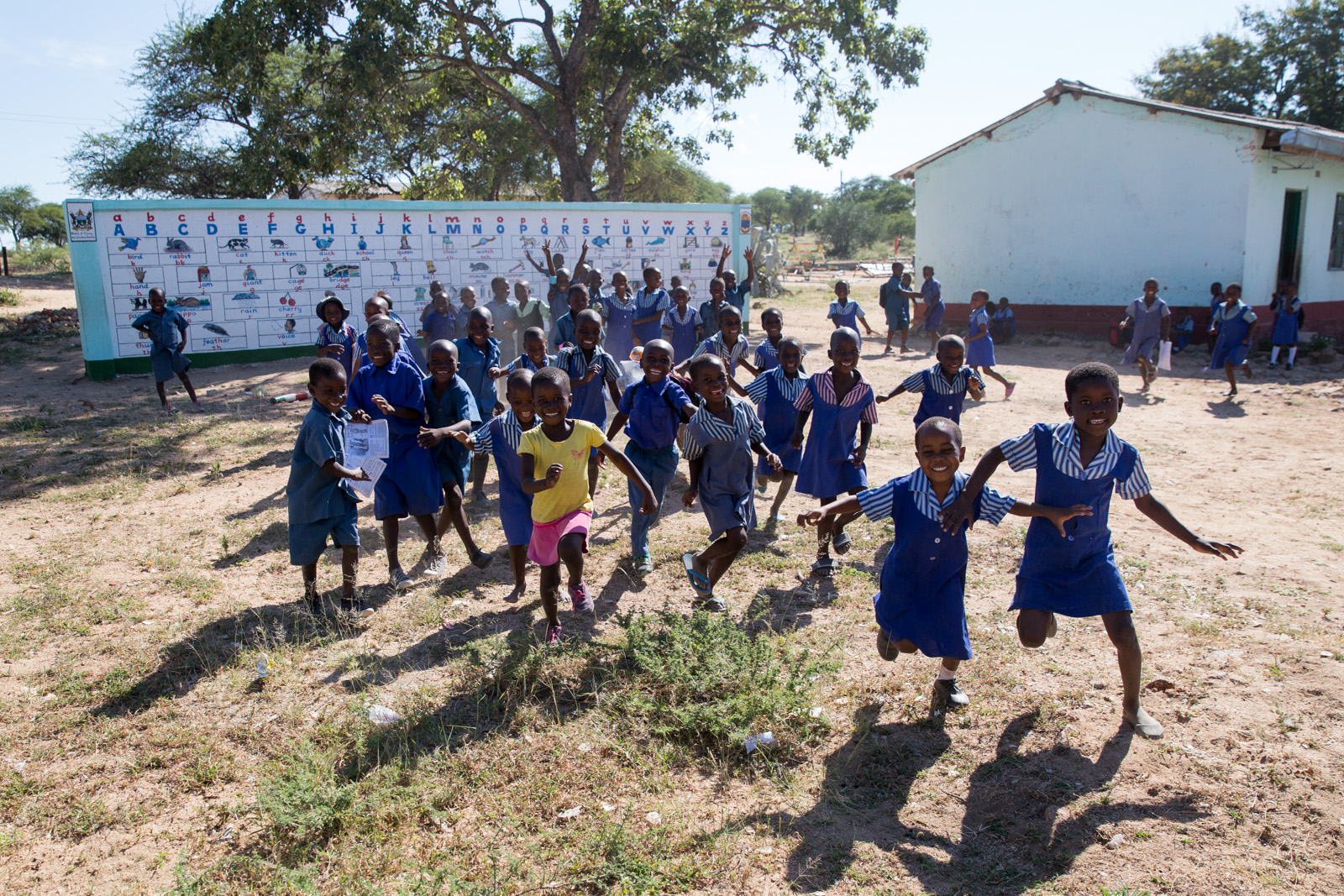 Children at Mashonjowa primary school, which served as the first aid depot in the wake of the cyclone, rush to be photographed as they celebrate the last day of school before the Easter break. Lynne James, who was involved in coordinating relief efforts, said the children would sing the national anthem in the morning and everyone, including the helicopter pilots, would stop their activities until the anthem ended. 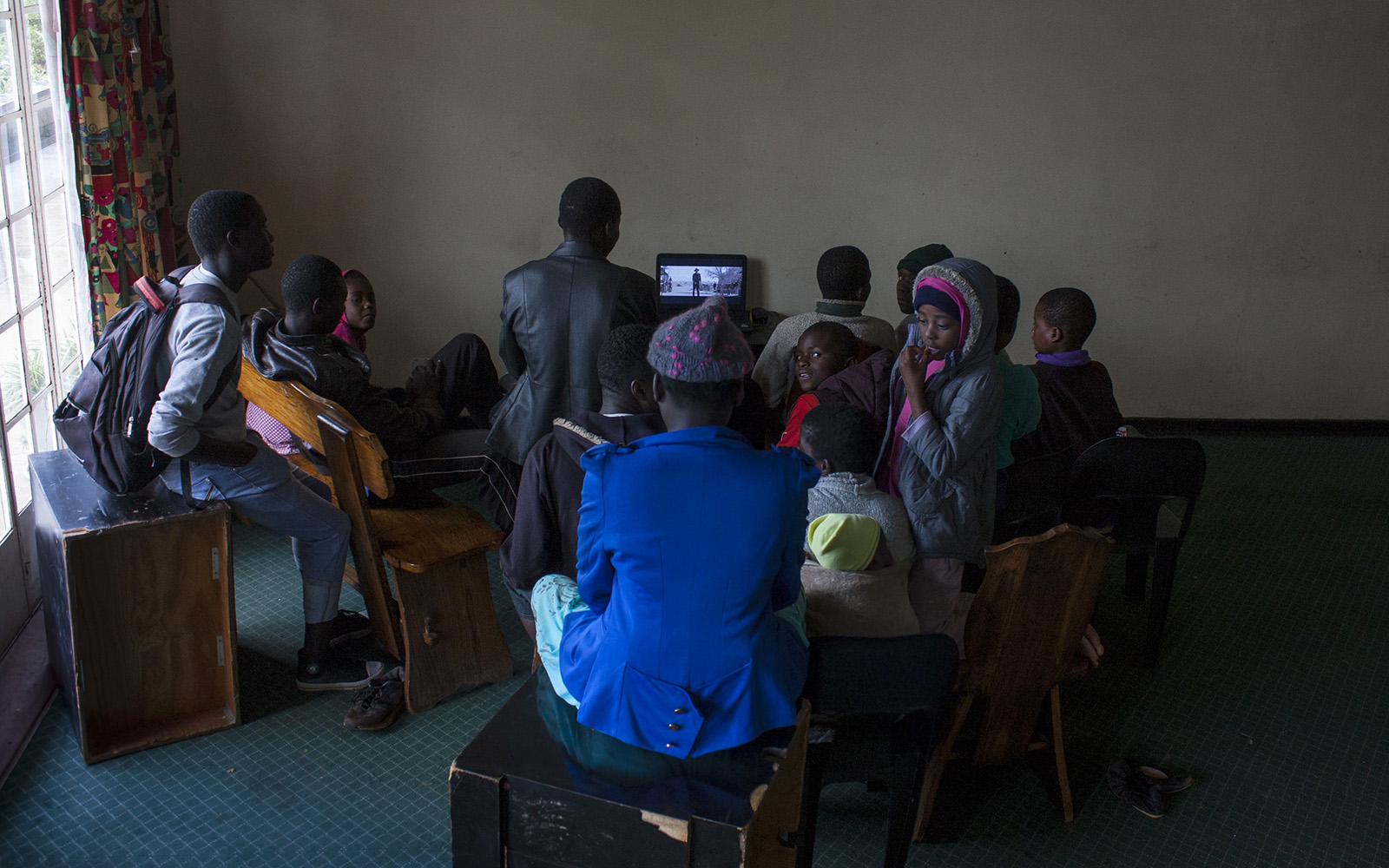 Displaced children being housed at the Chimanimani Hotel crowd around a laptop on a rainy day and watch a Spaghetti Western for entertainment. Chester Dube, a local farmer who took charge of organising the housing of displaced families at the hotel, said now that food and medical aid had been provided, they were in need of a projector or big screen television, and books and pens, to provide children with an escape from the trauma they had lived through. (Photo by Steve Kretzmann) 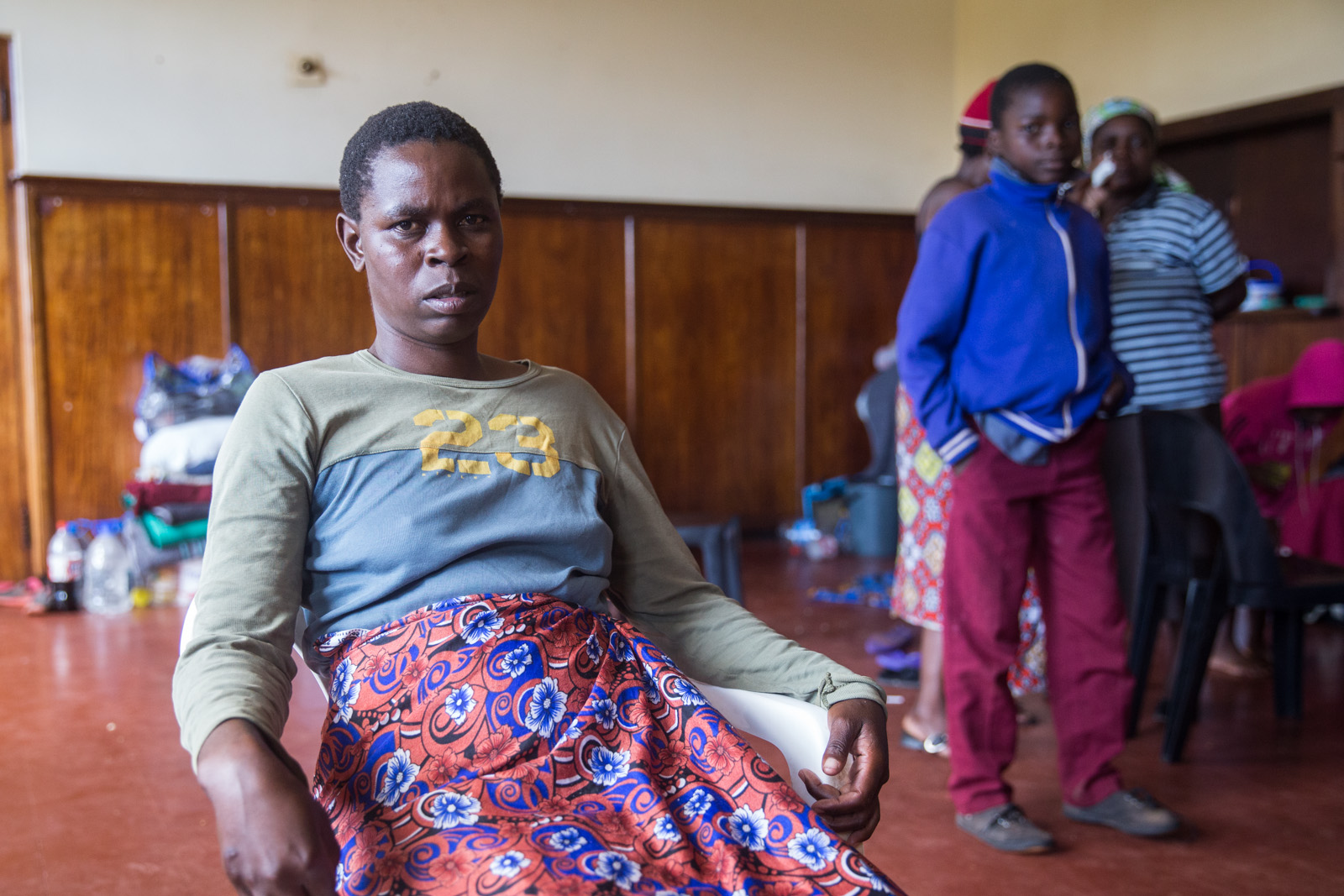 Edna Kabayangiri lost her two-year-old girl in the mudslide that hit Ngangu. Kabayangiri said she was washed about 100m from her house and was stuck for hours in the dark calling for help. Her child’s body is yet to be found. 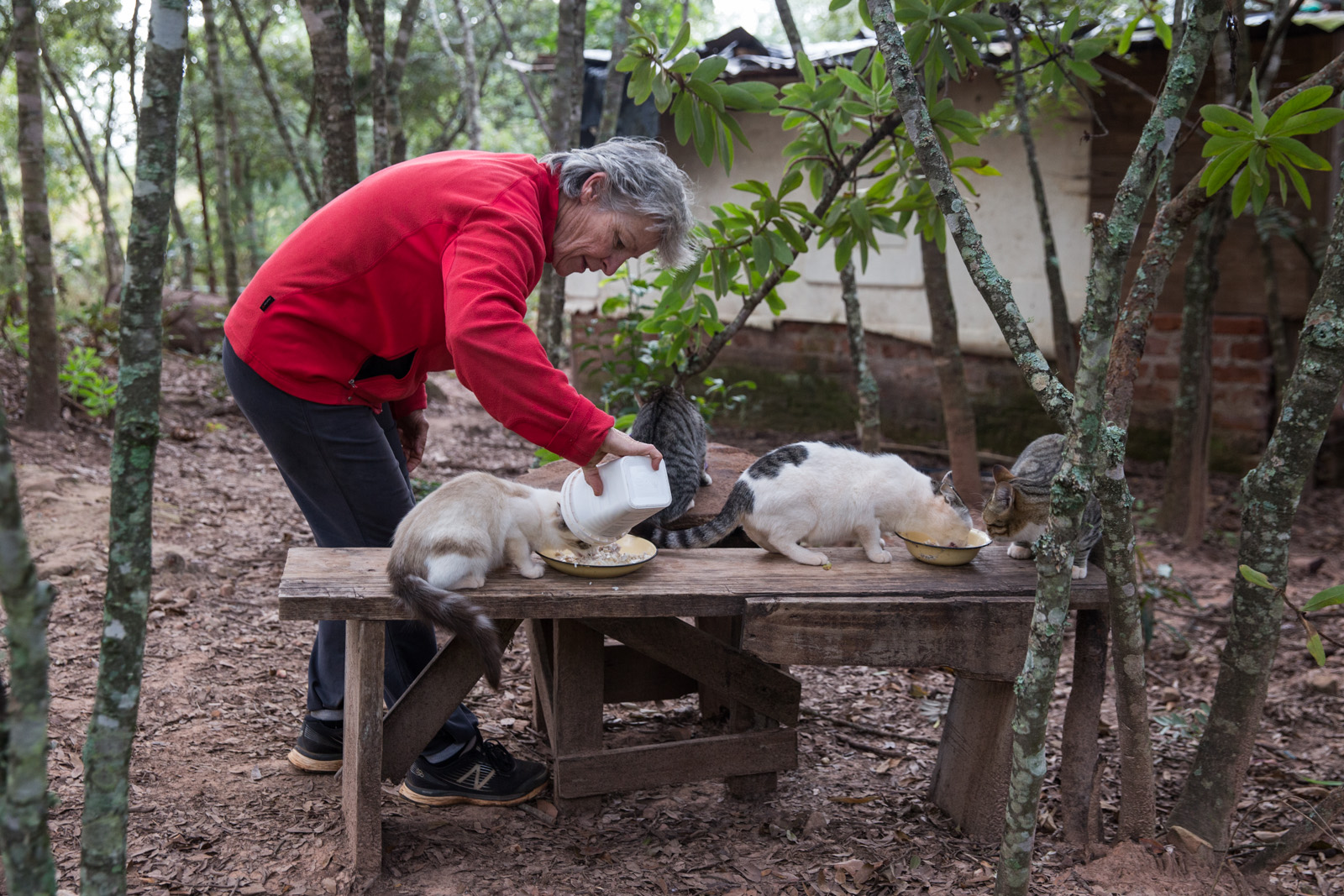 Jane High, who runs the Chimanimani Tourist Association feeds a group of semi-feral cats next to her lodge, the Frog and Fern. High set the tourist association offices up as an aid-receiving depot and ensured it got into the right hands. She also put the local mountain guides and soccer team she leads to work, taking food over the mountain to an isolated household headed by a disabled teenager. 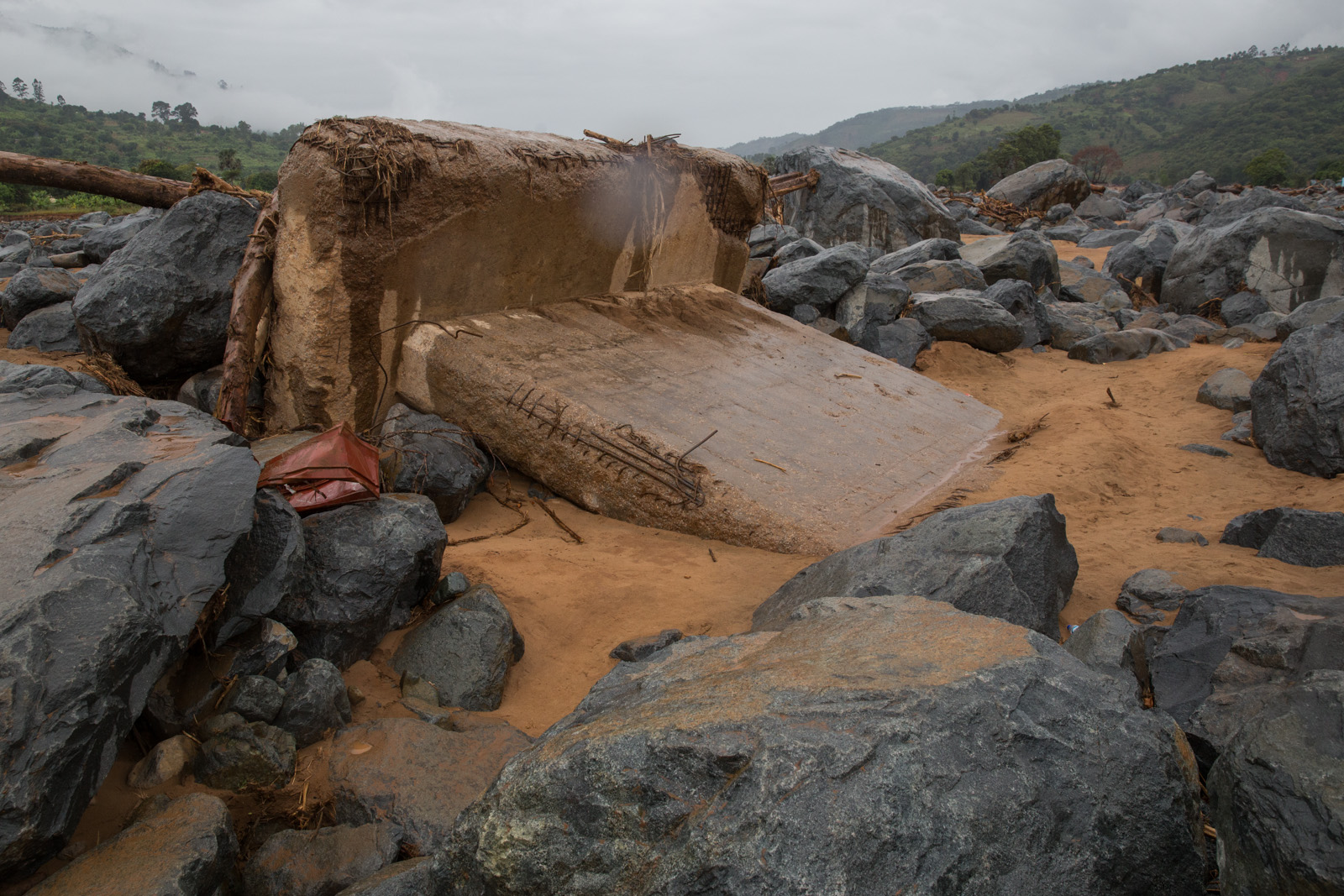 Flood waters rising into Copa village carried this section of a bridge 500m downstream. The boulders surrounding it were also washed down, and now cover land where there were houses and crops. Surviving residents estimate over 200 people were killed, their bodies washed into Mozambique. Only one body, which was photographed by Mozambique authorities, has been identified. 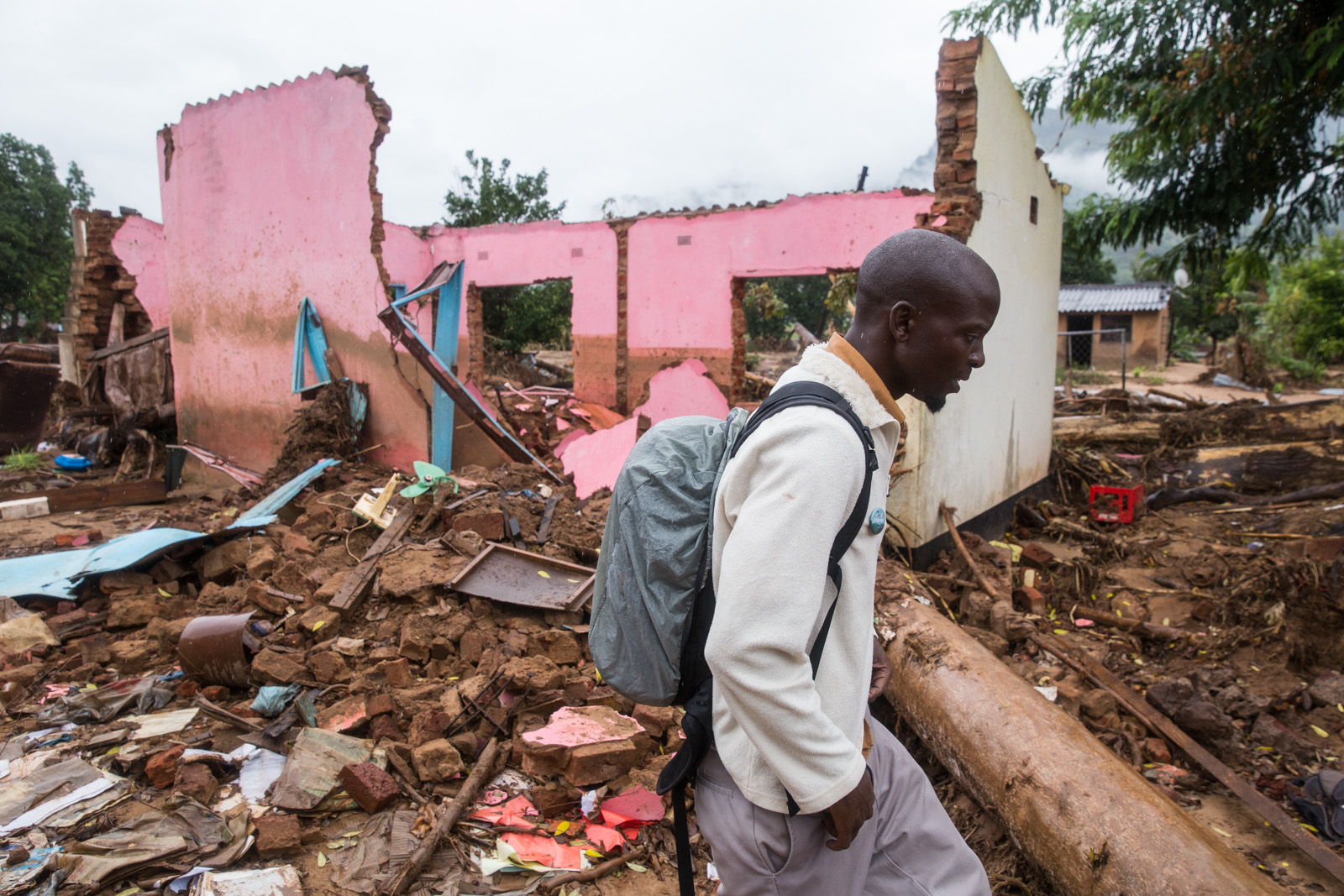 Alexander Muyambo walks past his destroyed family home in Copa. Muyambo’s father, who was a school headmaster and supported his extended family, was lost to the flood waters after the tree he climbed was uprooted. Muyambo was in Mutare studying for an electrical engineering diploma when the cyclone hit his home village. After hearing the news, he walked 50km from Chimanimani to find out what had happened to his family. 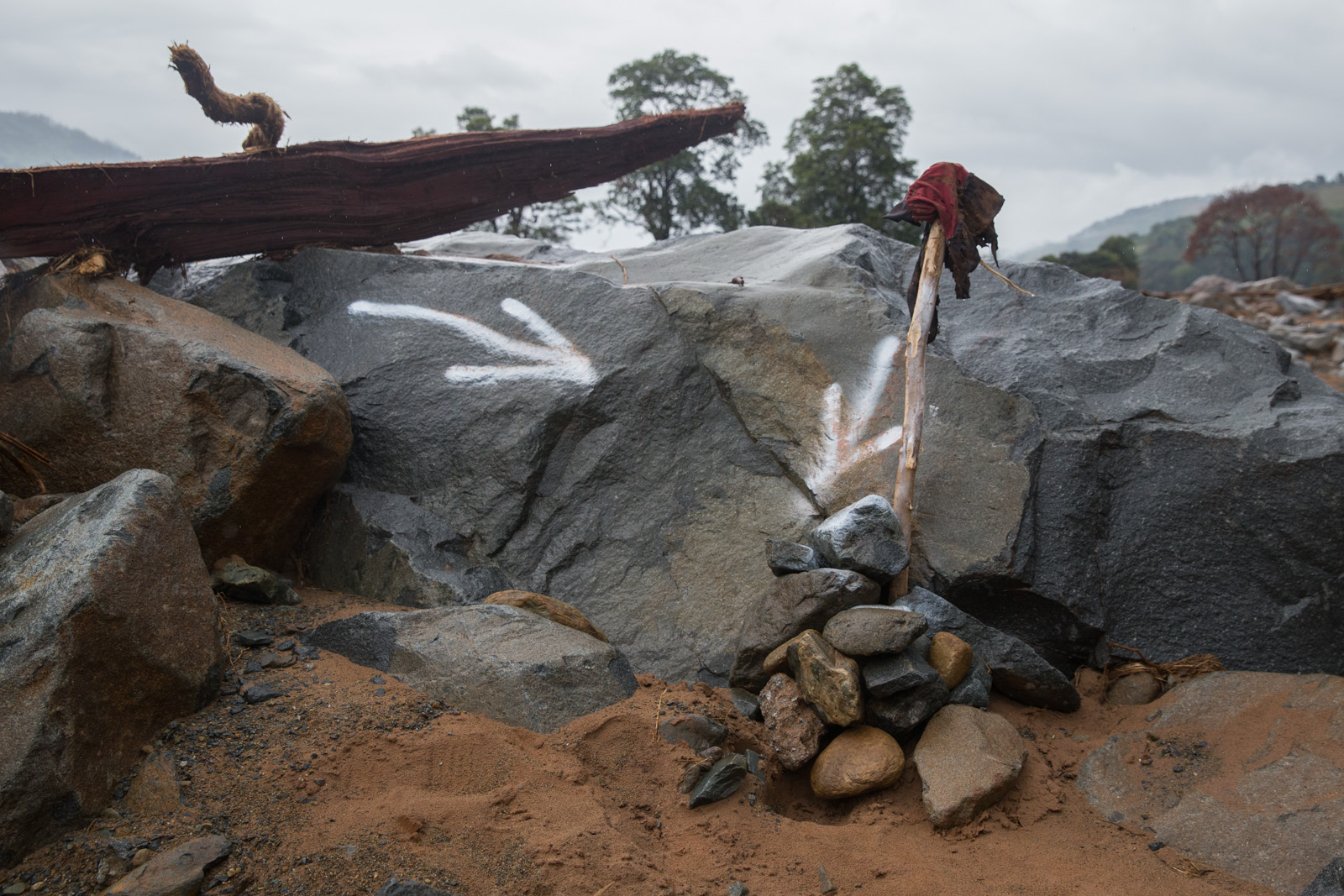 Arrows point to where sniffer dogs picked up the scent of possible dead bodies. But whether the dogs discovered buried humans or not will remain unknown until the massive rocks can be shifted by earthmoving equipment. None of the residents knows when this might take place.

As of 7 April, UNICEF estimated 344 deaths in Zimbabwe and 257 people missing from the cyclone. In Mozambique, over 500 people have died and thousands remain missing. DM