Art: The Fynbos After The Fire

Art: The Fynbos After The Fire

When a fire blazes across Table Mountain, one of the few benefits is the germination of dormant fynbos seeds. In fact, without fire, fynbos would gradually die out. It’s one of nature’s most powerful allegories: that out of something so violent, so destructive and so powerful, can come something so beautiful, so unique, so precious. This is what I was thinking about when I went to interview Lorraine Loots, miniature artist extraordinaire, Instagram sensation and my friend of 10 years.

Lorraine Loots rose to international fame after completing a “Business Acumen for Artists” course at the UCT Graduate School of Business. Every participant of the course had to pitch an idea to a panel upon completion. Loots, who had struggled with the idea of being an artist or, more specifically, had struggled with the idea of selling her art, did the pitch but had no intention of following through.

“The course had been so enlightening but I didn’t want to put my work into that business realm. I wanted to be an artist on the side with a boring 9-5 job that pays the bills… My work had always been so sentimental to me that I couldn’t bear the thought of having to pay electricity and water bills with the money made from those things. It was too precious to me. It didn’t weigh up.”

The pitch she gave that day was her idea of 365 Paintings For Ants.  She would paint a tiny miniature every day for a year and post it on Instagram as an accountability mechanism. Her intention was that she would do this alongside a day job.

“It was a practical way to keep painting. I was going to spend an hour a day outside my work hours doing that.”

But the universe, as it tends to, had bigger plans for the miniature paintings.

365 Paintings for Ants began on the 1st of January 2013 and quickly blew up on Instagram, the major moment being the morning after Instagram itself featured her work and she woke up with 33,000 new followers. Her followers began booking dates and sending requests for commissions to her. Not knowing how to attach a price to her work, she simply charged R500 per piece. In 2014, she continued on the 365 journey and created Postcards For Ants with Cape Town as her theme. At that point, she began charging R850 per piece. After two years of painting every day, Loots reduced her project number in 2015 to 100 Painting For Ants. It was at this point that her husband, Mark De Menezes, suggested that she allow her audience to dictate her paintings’ worth and she began auctioning them online. Finally, the price was settled on by the public.

The significance of the figure meant more to Loots than it would to most.

“I was 11 when my brother Wouter was diagnosed, wrongly diagnosed, at first with lymphoma and then leukaemia. He was sick for just over a year and he passed away when I was 13 and he was 15. Seven years later when I was 21, my younger brother Frank, again 15, was killed by a drunk driver. When I got to the hospital he was being kept alive by machines. They tested to see if he was brain dead. He was. The organ donation people were there and that was that… It was the 1st of January.”

It is inconceivable that anyone should have to endure more after losing both her brothers at such a young age, and yet, on the 31st of December 2013, the last day of her project, her brother-in-law was shot dead in Durban.

“These numbers: 15, 15, 15,000 the first of January, the last day of the year, these cusps. I was 13 when Wouter died on the cusp of puberty; I was 21 when Frank died, on the cusp of adulthood… all of these big turning point dates and numbers.”

These dates and numbers were the emotional, or sentimental, driving force behind 365 Paintings For Ants. Knowing her story, it’s understandable how difficult it might be to put a price on something that is the direct result of devastation.

“It’s more than business, which is still what makes it hard to this day. It’s really hard to come by. And bills are really easy so it just doesn’t match up.”

Sitting down every day to paint was her therapy.

“It started with dates becoming this very live, resonant important thing and this pressure of celebrating every day and being grateful for the fact that I’m here when they’re not.” After almost two years of painting every day, of marking every day, Loots finally felt the catharsis she had been seeking,

“I remember distinctly towards the middle of 2014 feeling completely done with this now – I’ve done it – I had this catharsis and it was done. So then it started to become something else, I had to keep doing it every day to stay sane. It has become a meditation.”

Her art, that first pitch at UCT, 365 Painting For Ants, all of it has allowed Loots to travel the world exhibiting in New York, Los Angeles, Chicago, Hong Kong, Singapore and Sydney. And now, after five years it’s culminating in a retrospective show, #ANTSinLONDON, from 4-9 June at the double-volume Espacio Gallery in Shoreditch, London.

It will be her biggest show yet with every one of the 916 works she has produced on display for the first time. 916 paintings in five years. 730 of which were done in succession every day from the 1st of January 2013 to the 31st of December 2014, 100 from her 2015 project 100 Paintings For Ants, 45 inspired from the cities she has exhibited in, a further 20 created especially for London and a final “16 random ones that I like”.

And yet 916 isn’t even the real number because, throughout those first three years, Loots was also painting commissions.

“I wish I knew how many but I lost count.” It came to a point where she had to turn down work, including from singer Alanis Morissette.

“That’s a good indication of how far in over my head I was, I couldn’t fathom doing any more.” The volume of admin that came with these projects was overwhelming: each request and email that required Loots to respond, every painting that had to be framed, packaged and posted, the unrelenting social media messages and comments… Ultimately it became too much.

“I’m not the kind of person who can ignore it. I want to answer people.” Enter her knight in shining armour from stage left: seeing the magnitude of the challenge, De Menezes started Artists Admin, a dedicated business team who take on everything from website design to accounting, shipping and management while still leaving the artist to dictate their own path.

Loots is now ready to break away from her signature style – the tiny, exquisitely detailed watercolour painting.

“This retrospective marks the end of five years of work. I’m going to play, experiment and explore oil painting, maybe even sculpture.” Running parallel to this new exploratory stage in her career, and one of the ways she’ll fund this freedom is her Lover’s Eye Collection. After the birth of her son, Felix, she conceived the idea of creating a collection of Lover’s Eyes where the public can have the eye of their loved one painted as a miniature and inserted into a locket – her modern take on the Georgian Lover’s Eye miniatures of the 18th and 19th centuries. 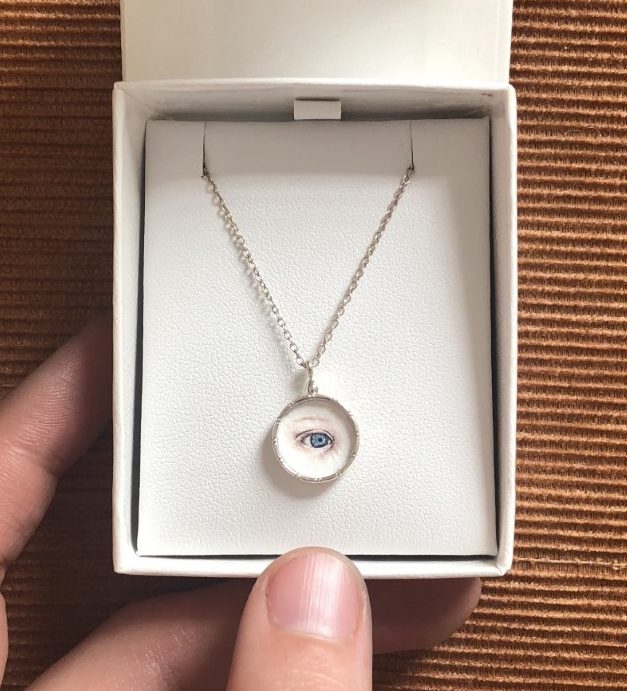 Her own eyes have taken strain over the past five years, “they’ve deteriorated a bit and I have to cut down on the amount of painting I do, which is one reason that I’m no longer painting every day.” Loots was very short-sighted as a teenager and recounts the story of getting glasses for the first time.

“I realised everyone else could see the shapes of the leaves on the trees and the details in the mountains where I thought you were just supposed to see a green blob on a brown stick… Perhaps because seeing in the distance wasn’t an option for me, my eyes got stronger up close.” Her eyes are not her only heightened sense, she also hears at zero decibels.

“Every sound drives me up the wall all the time. If someone is eating near me, I want to run away.”

The authenticity of her work is that it comes from that deeply unique place of experience and a life lived – the entire concept of 365 Paintings For Ants started as both a tribute to her brothers’ deaths and as a way to mark a life. It can’t be copied and it can’t be faked. Yet Instagram, and the world beyond it, is full of wannabe Lorraine Loots’. It has become a platform to copy and plagiarise, which has happened to Loots more than her fair share.

“It’s the world we live in. Everything is accessible, everything is out there, it’s so easy to find and it’s a click away. Previously you’d have to go to a gallery in Venice to see someone’s work but those days are gone.”

Of course, imitation can be seen as the highest compliment but in speaking on a recent plagiarising of her work, Loots’s upset is not about “people imitating my art or copying my brand… Without being dramatic, from where and why my art started it’s an actual infringement of my soul”. Some things are worth fighting for.

As a friend and a fan of Lorraine Loots, I’ve thought deeply about what it is that I treasure about her work and her as a person. Sure, the detail of her work is extraordinary, her dedication and discipline is a source of deep admiration for me. When I look at the paintings hanging in my house – one for every member of my family – each with their own meaning, I think of their detail and I think of her talent but more than anything I think of her courage. Her genius is not her heightened senses, it’s not some divine talent that has been bestowed on her, it’s not her daily dedication and discipline: It’s her ability to channel the most tragic circumstances of her life into something worthy, something positive. Her genius is her everyday courage.

* ANTSinLONDON will run from the 4-9 June, 2019 at the Espacio Gallery, Shoreditch.