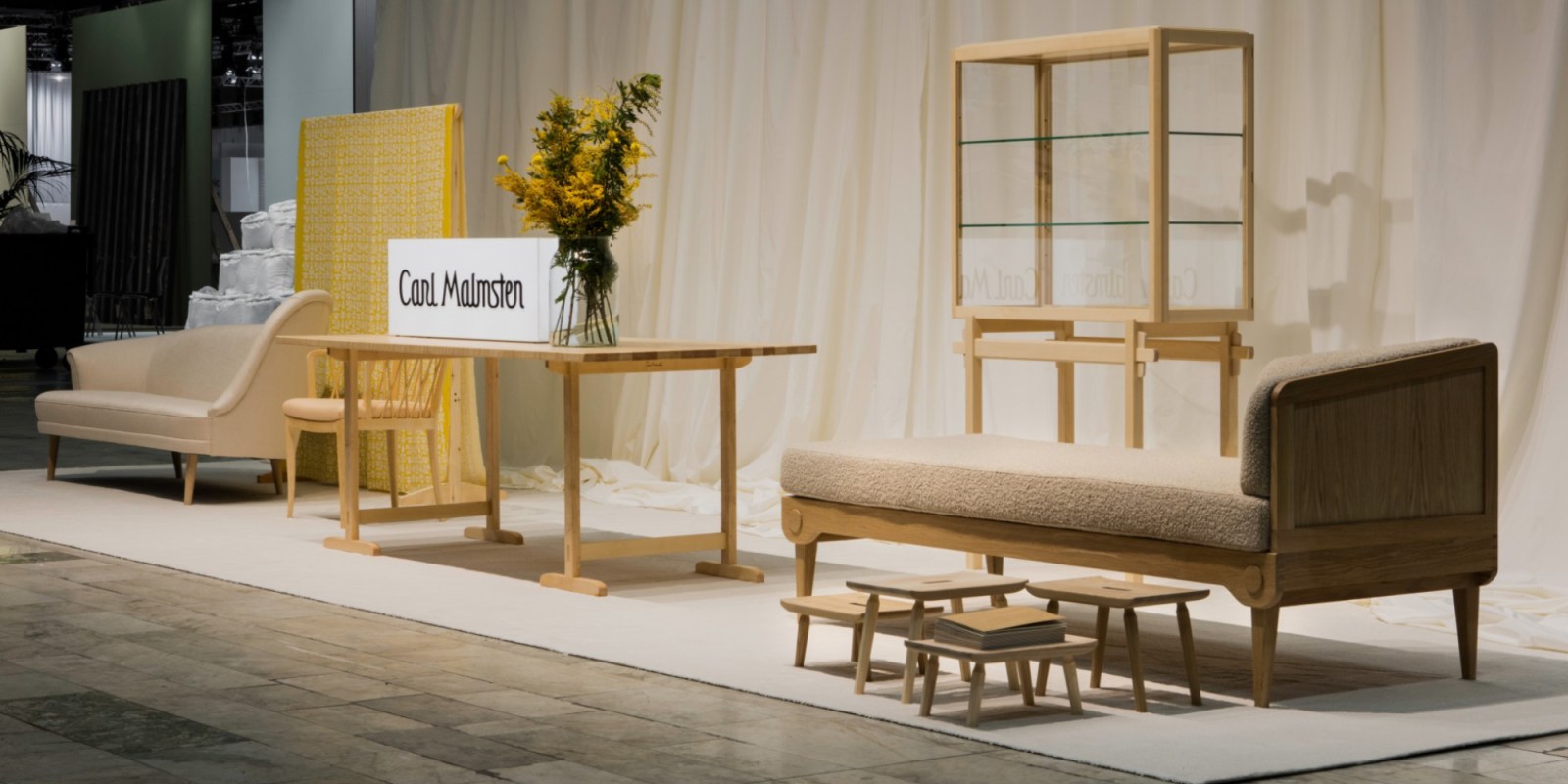 Where does a region whose design aesthetic is considered among the most influential in the world go to next? The answer might be found during #StockholmDesignWeek2019 at the Stockholm Furniture and Light Fair.

According to statistics compiled by the Swedish Federation of Wood and Furniture industry/Trä-Och Möbelföretagen (TMF), the total production of furniture in Sweden was estimated at R35.8-billion in 2018, with exports estimated at R26-billion. And that’s just for Sweden, one country among the three most design-influential countries of the Nordic region.

The impact of Scandinavian design on the global furniture and lighting industry is well documented: From the minimalist lines and organic shapes that grew in popularity from the mid-20th century onwards, the neutral tones and pastel colours, to the undying popularity of IKEA.

The aesthetic, which merges easily with other interior design elements, has catapulted the design industries of the Nordic region to global influence. As a result, the Stockholm Furniture & Light Fair, first launched in 1951, has grown to be the largest design gathering in the region and is central to the annual Stockholm Design Week, which it initiated in 2002.

More than 40,000 visitors gather annually in freezing February to view and shop works from more than 700 exhibitors, making the week a key event for design enthusiasts. February 2019 was no different. Four out of five exhibitors are from the Nordic region, and a familiar and visually appealing Scandinavian aesthetic was, naturally, the defining look of the fair. However, beyond the exhibitions, the week is also an opportunity for the host country, Sweden, to present its outlook on design.

Rather than presenting a departure from what made their aesthetic renowned and influential, designers dug deeper into historic Swedish references while adding innovation through sustainable production and socially conscious design.

So, what’s next for this highly influential design region? First, heritage, because just as one might think there’s no more Swedish-ness for the Swedes to Swede about, that they might be forced to look to other regions for inspiration, they’ll out-Swede everyone and pull out a whole new batch of Swedish-sance to reference and create afresh.

Beyond the historical, there were many variations of the Scandinavian design look. See some highlights from the walk-through video below for a quick refresher of why Scandinavian design remains a perennial favourite. (Filmed and edited by Malibongwe Tyilo)

This award-winning Stockholm-based design duo is made up of Swede Fredrik Färg and French-born Emma Marga Blanche. Since founding their studio in 2010, the pair has received numerous accolades including being named Designer of the Year.

For the design week, they opened Blanche’s historic family home, built by her great-great-grandfather Julius Westerdahl in 1889. Having arrived in the city with very little money, Westerdahl built a bakery and manage to amass a fair amount of wealth. He didn’t want to leave the working-class area where he’d built the bakery, so he installed a remarkable home right on top of it.

The house’s ornate décor presented the backdrop to several of Färg & Blanche’s design pieces during Design Week. At first glance, the pieces fitted into the house and its furniture so well that they might have been mistaken for pieces from another era. But upon closer inspection, the armchairs, stools and lights reveal their contemporary roots. Blanche spent a lot of time in the house as a child, making this exhibition a particularly personal one for her.

Carl Malmsten (1888-1972) was a well-known Swedish designer and architect. He was particularly revered for his dedication to Swedish craftsmanship. Designers Anna Krautz and Lars Burlow dug deep into Carl Mamsten’s archive of more than 20,000 sketches and found some new treasures which were brought to life at the fair.

Sustainability and diversity were key themes across the week, from furniture designers to firms working on public spaces through to fashion designers.

One of the highlights of the Stockholm Furniture & Light Fair is the “Greenhouse” section, which typically houses yet-to-be established designers and students to showcase prototypes to industry leaders, journalists and producers from around the world. In 2019 there were some 30 independent designers and 35 schools from 21 countries taking part.

Konsfact, a design school on show, challenged students to explore outdoor public furniture such as benches that might be found at bus stations.

One of the more interesting projects was Urban Sprout by Mathijs van Gageldonk.

“Public areas are often a place of traffic where people go from one place to another, so that public furniture, like benches, is more often empty than in use. With the urban sprout, I want to combine the concepts of public sculpture and furniture.

“While the object is not in use, it can function as a sculpture and when it is in use the aim is to function as a place to wait: You can sit, lean or use it as a table. Some examples of locations where it can be placed are bus stops, metro stations or squares,” says Van Gageldonk, whose steel and wood design literally looks as though it is sprouting out of the ground. The design makes it possible for commuters to use it as a something to lean against or sit on while taking up less space than a bench.

Next in the sustainability field was Tangform, started by Nikolaj Thrane Carlsen from Copenhagen, Denmark. Tangform wants to create sustainable furniture for the future.

Carlsen’s seaweed lounge chair design was a favourite at the fair, eventually going on to win the Best Performance award for 2019 by the Greenhouse Jury of industry professionals.

The lounge chair has “a shell made of 100% biodegradable seaweed composite material. It helps to draw attention to seaweed as a highly sustainable product material without compromising on aesthetics and quality, with a focus on the circular economy,” explains Carlsen.

More than just a buzzword, circular design and the circular economy are central to the vision of the future of design presented by forward-thinking practitioners.

The idea and philosophy around the circular economy have been growing steadily over the past few decades, as its proponents have encouraged businesses to focus on production that results in minimal waste, long-lasting design based on recycling, refurbishing, re-using and upcycling.

The idea is to make products that go beyond a single product life cycle for a single user that might eventually end up in a landfill, and instead, think of products that can be transformed into something else, or at best be compostable.

Marie-Louise Hellgren, founder and designer at HearteartH, is a well-known advocate of circular design. She has worked with companies around the world on sustainable design, such as Starbucks, Asplund, IKEA, Design House Stockholm and Filippa K.

During Design Week, she was part of a lunch hosted by the Swedish Institute, during which she showed some of the work she had done with furniture designers as well as compostable fabric she had created, which she uses to make dresses.

Right at the entrance to one of the main halls of the fair, TMF had its stand, presenting what could be seen as its manifesto for the next decade of Swedish furniture design, Agenda 2030, which showed an undeniable commitment to turning sustainability into big business for the region.

As a South African design enthusiast, well-aware of the challenges our own furniture design industry faces, an industry which, in comparison with Sweden is still in its infancy, with just a few names beginning to get recognition, one can’t help but try to glean a few lessons.

And as a journalist with a love for stories, it was how the Nordic region keeps going back to its own stories, its roots and its original lifestyle to search for new inspiration that reminded me of the many stories our region has yet to tell on the global furniture stage. There is work to be done. ML