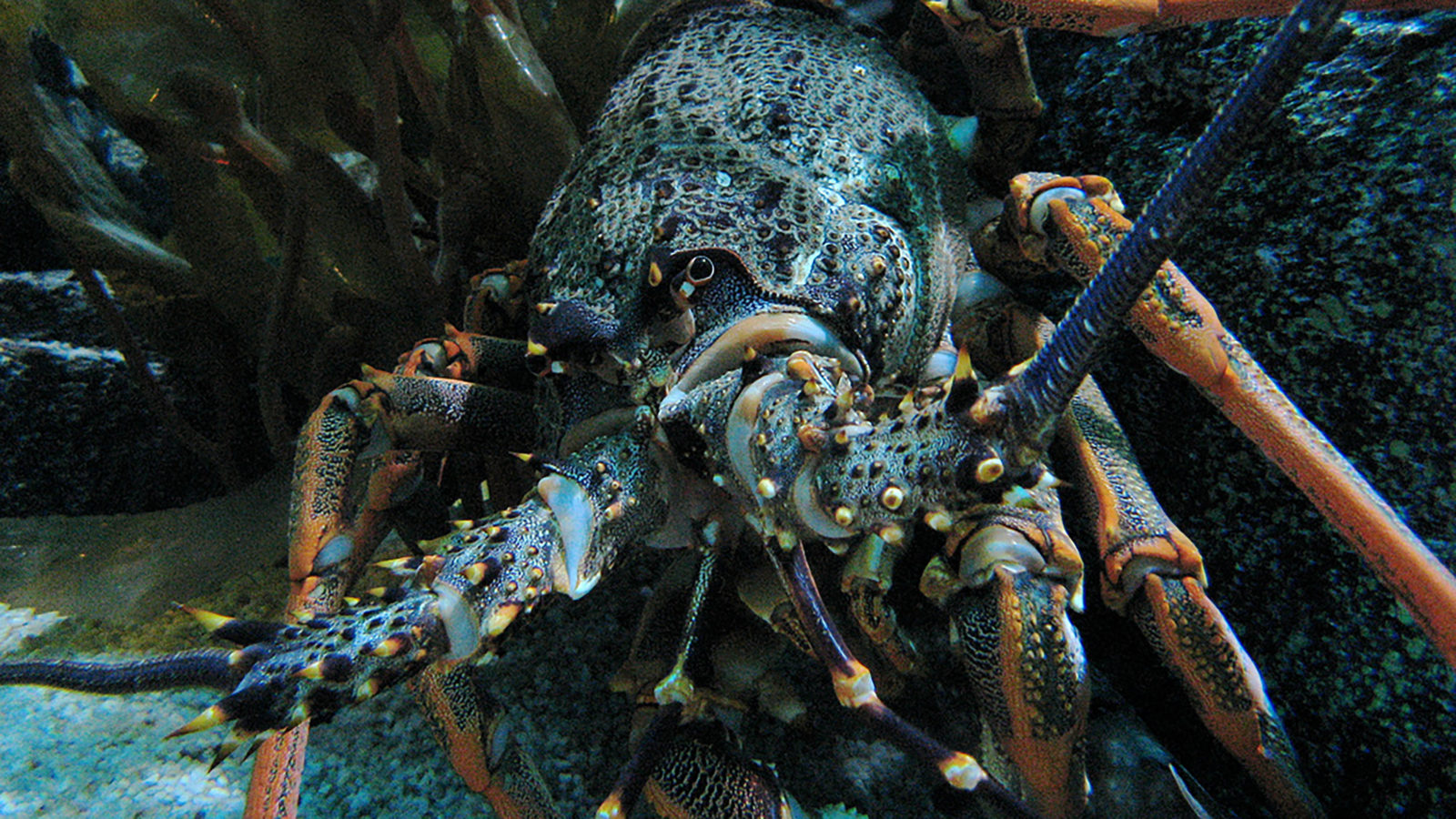 A sizeable Sri Lankan green lobster was looking at me, as if daring me to do it. “Come on, choose me, I dare you. They’ll throw me in a pot, you know? I’ll convulse violently. Then I’ll die. But I’ll be delicious. And tomorrow you’ll still be here. And I won’t. Go on, Sissyboy!”

I did choose the shiny green lobster. It had been right – it was delicious. And I did feel bad. This was Hong Kong, circa 1996, a year before the Brits were to be turfed out. We were standing in the street, outside a decrepit harbour café. At foot level were several troughs filled with seawater and crawling, swimming things. Shiny fish, plump abalone, great spindly crabs, lobster of many shapes and sizes. And colours. There was a magnificent blue one. And my green one.

And I was thinking: those perlemoen probably come from Hermanus. Poached by men from Hawston who have the balls to risk fat fines or imprisonment for doing what makes perfect sense when you’re a fisherman living at the coast and there are perlemoen everywhere you look, if you look down and into the sea. Men whose endeavours should be protected, not discouraged with threats of losing their livelihoods. Men who by rights should be legally taking perlemoen (of approved size) from the sea. Who should be told that they can sell a certain percentage of their haul to foreign interests at a very fat profit, but that the counterpoint is that they must, by law, sell a certain amount to the South African market at a much lower price.

Why should we not eat (relatively) free from the sea, to use the phrase used by Lannice Snyman and Anne Klarie in their book Free From the Sea which was in print from 1979 until 2005. And I’d had to fly across the ocean for thousands of sea miles to find it, here, in a grubby port café, where the abalone we chose were about to be ill-cooked and served to us by bemused cooks who shrugged when we dared point out that it was tougher than a sailor’s boots. One imagines. I’ve never actually eaten a sailor’s boots, but that night, I probably would have taken a chance on them.

Luckily, the green lobster was not the Nike shoe by the same name and colour. The evening was saved by the arrival of my Sri Lankan lobster, now a cracking orange, its perfectly white flesh redolent of salt water and heaven. It was seemingly still looking at me. I turned it over.

I’d felt far guiltier a few years earlier when, in Cape Town, my then 11-year-old daughter finally gave in to my nagging that she had to try to eat crayfish some time or otherwise how would she know she didn’t like it. “All right, dad, I’ll eat one,” she finally agreed. Our friend Devi Moodliar – then co-proprietor of Talk of the Town restaurant in Burg Street – agreed to cook the fair-sized kreef I’d managed to get hold of, and into the pot of boiling water it went, while we watched, horrified, as it convulsed and gave itself up to the human palate. Devi served it on a large white plate, placed it down on a table, my girl picked up her knife and fork and methodically, quietly, consumed the entire creature.

Then she wiped her mouth, folded her napkin, pulled her chair back and said, “Right, dad, I’ve eaten it. And I will never eat it again.” My respect her for had never been greater. And dad had been the one to learn a lesson. She turned out, as an adult, to have a dreadful allergy to crustacea. I still feel awful. When she was 21, her throat closed after eating crab on a beach in Fiji. Thank God her friend, Jo, had her asthma pump in her pocket. In Zanzibar, years later, she touched a starfish and her entire body came out in a rash.

Hong Kong was also the place where I ate scallops for the first time. They weren’t yet a “thing” at the Cape, would you believe. We’d been staying at the Mandarin Oriental Hotel in Hong Kong’s Central, and the little char-grilled spheres were the hero of a salad for dinner in the top-floor restaurant. For lunch next day we were in a huge dim sum restaurant that was a favourite lunch spot for the city’s broker set, white walls and brightly lit in that way that the Chinese prefer when dining out, unlike the moody, softly-lit ambience of the night before. Two-tiered trolleys bearing baskets of dim sum offered their little parcels of prawn and fish fillings, either steamed or deep-fried. Minds and palates were opening to new horizons, as happens when we travel. There were no dim sum joints in Cape Town or Joburg back then, unlike the world of Asian treats from bao to ramen to be found today in trendy city bars and cafés.

If my green lobster was the highlight of that Hong Kong visit, the lowlight, comparatively, of a later trip to Belgium was tucking into a bowl of paling in t’groen in a restaurant in the centre of Ghent, where I had slumbered fitfully the night before in a giant room of the Cour St Georges (St Jorishof), a 14th Century inn where, I was told, Napoleon had slumbered in that very bed, obviously some centuries later but long before my visit. My host, the late Denis Bouckaert, owner and founder of Den Anker, the Belgian restaurant and bar at Cape Town’s V&A Waterfront, had asked me, somewhat apologetically, if I’d be up for trying the local speciality, paling in t’groen, which translates as eel in the green.

I did say “comparatively” a lowlight, which is not to suggest it was a bad meal. Just one that might take the palate a bit longer to acclimatise to, so to speak, than that green lobster. Paling in t’groen has a sauce of many kinds of herbs from sage, oregano and sorrel to chervil and thyme, all very finely chopped. The pieces of eel are cooked in a white sauce to which the many herbs have been added. Another speciality is Gentse Waterzooi, a simple fish stew, “waterzooi” meaning “water boil”. It was pleasant enough.

On at least three other occasions, though, Denis hared me around in his white Porsche, heading for superb countryside eateries where we would both order the dish you must eat whenever in Belgium: mussels. Great, black iron pots (yes, potjies) which, when you lifted the lid, would release the hot vapours of the herbed, garlicky white wine the mussels had been cooked in. You’d have bread to break to mop up the juices, and those perfect little Belgian frites that nobody else can make like the Belgians can. Nope, not the French – frites are Belgian. The frites, Denis explained at least once a day, while I clung to the door handle in the passenger seat of his Porsche, were made strictly from a particular variety of potato – bintjes – and cut to very specific widths and lengths, to the extent that I imagined chefs would be locked up if they transgressed by a millimetre or three. They were double-fried and served with a light, perfect mayonnaise. Not the chefs, the frites.

I’ve been lucky enough to eat winkles late at night in a restaurant in a narrow side street in Cannes, a plateful of perch in Montreux, Switzerland; calamari and a pint of cold beer in a nightclub in Juan le Pins after a hair-raising drive along the winding coastal road with a drunk Australian at the wheel and, did I mention, green Sri Lankan lobster in Hong Kong.

But my favourite seafood memory involves a white 1964 Cortina GT with a flash of red along its sides, a roadside diner in Mouille Point, and the windows being wound down for the waiter to clamp trays to. Simple, wondrously simple, crayfish mayonnaise at the Doll’s House, with crispy potato chips, and a tomato salad. Nothing tastes like home. DM