The Resisters – The Communities That Took a Stand 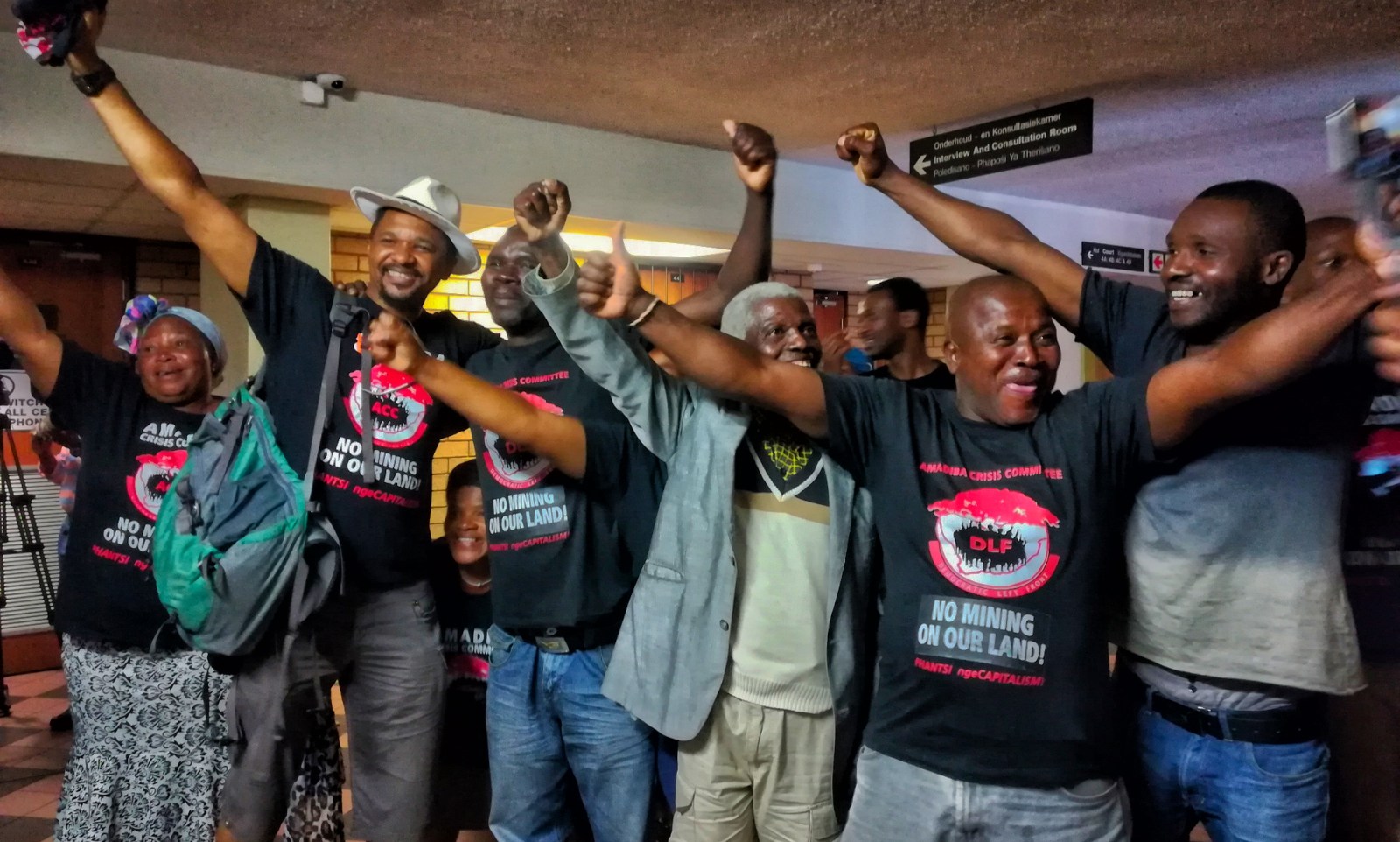 Photo of Xolobeni community by GroundUp.

South Africa is blessed with a vibrant and vocal civil society, together with a proud history of human rights-based litigation. As 2018 draws to a close, we celebrate the South African communities that took a stand — aided by committed lawyers — against powerful forces within both government and the private sector. In so doing, they revealed again what is possible through unity in resistance — sometimes at vast personal cost.

It was dubbed a “David vs Goliath” battle for good reason.

In November, a small Eastern Cape community won a historic victory against the combined might of the Department of Mineral Resources and a major Australian mining house.

The Amadiba Crisis Committee saw over a decade of fighting finally bear fruit when the North Gauteng High Court ruled that mining rights could not be granted in Xolobeni, on the Wild Coast, without permission from the Xolobeni committee.

The establishment of a titanium mine in the area by Australian mining company Transworld Energy and Mineral Resources was considered virtually a done deal, with persistent rumours that the South African government had already promised the mining rights over the strenuous objections of the community.

The conflict came to a head in late September 2018, when a meeting in Xolobeni convened by Mineral Resources Minister Gwede Mantashe exploded into violence: Amadiba Crisis Committee members were tear-gassed by riot police and their attorney Richard Spoor was arrested.

That was not the first time that the community had faced serious danger for taking a stand against the proposed development. In 2016, Amadiba Crisis Committee chairperson Bazooka Rhadebe was gunned down in front of his young son, in what his colleagues claim was an assassination linked to his anti-mining activism. Two-and-a-half years later, there have been no arrests.

Since the November court decision, threats against Amadiba members have intensified — causing Amnesty International to stage a protest in their defence outside the South African High Commission in London in December.

“Members of the Amadiba Crisis Committee (ACC), a community group organised to unite people across five villages to defend their land rights, have been threatened, attacked and even killed for their efforts to protect their land,” Amnesty said.

“The South African government must put people before profit and uphold the legal right of indigenous communities to decide the fate of their home.”

For now, at least, the people of Xolobeni have won that right.

A battle with many similarities to that fought in Xolobeni similarly ended in victory this year for the people of Lesetlheng village, part of the Bakgatla-ba-Kgafela community near Rustenburg.

Members of the Lesetlheng Village Community, drawn from 13 families, had also been fighting for more than 10 years for their right to protect land purchased by their ancestors almost a century ago. Mining rights to the land were granted by the government in 2008 after deals signed by two traditional leaders, without adequate consultation with the wider community.

The North West High Court ruled that the community could be evicted from the land now controlled by the Pilanesberg Platinum Mine — but the Constitutional Court begged to differ.

In October, the Constitutional Court unanimously ruled that the families’ customary land rights had to be protected, even if a mining right had been granted on the land in question.

Both the Xolobeni and Lesetlheng struggles are representative of what Fort Hare Sociology Professor Sonwabile Mnwana terms “a significant rise in levels of rural grassroots resistance to the rapid expansion of mining as well as to the collusion between state officials, mining companies and local chiefs”.

But it is not just in the sphere of mining that South African communities have been pushing back in 2018.

In late November, South Africa bore witness to startling footage of elderly women being tear-gassed and manhandled by riot police while calling on Allah to protect them.

The women were residents of Cape Town’s Bo-Kaap, protesting against the development of the historic suburb by the Blok construction company.

These protests have been ongoing in various forms for most of 2018, and have been remarkable in the breadth of their participation, predominantly from Muslim Capetonians. While some of the original protest activity was spearheaded by youngsters under the banner of a non-hierarchical Bo-Kaap Youth Movement, the cause was also passionately taken up by senior citizens.

The catalyst for November’s clashes between police and protesters was the construction work taking place on a high-rise apartment block being built by private developers on Lion Street.

But at the heart of the conflict was a deeper and more intractable problem: the increasing unaffordability of accommodation in central Cape Town, largely attributed to the mushrooming of fancy apartments and hotels in the area around the Bo-Kaap.

Residents have long argued that the development of the area should be restricted by rezoning it as a national heritage site: A decision which would be defensible in terms of its historical significance. But politicians have failed to take any decisive steps.

Indeed, the matter looks likely to become one of Cape Town’s political footballs ahead of the 2019 elections. President Cyril Ramaphosa pledged his support for the proposal, at least in theory, when attending a Ramadan dinner hosted by the Muslim Judicial Council in May. The DA, meanwhile, has let it be known through the release of its Bowman’s report into Cape Town City Council misconduct that former mayor Patricia de Lille allegedly had a role to play in blocking the rezoning.

Amid apparent political apathy — or behind-the-scenes pressure from commercial interests — the people of the Bo-Kaap have taken matters into their own hands. And though the battle is far from won, building cranes are presently banned from the area until the courts rule on an interdict application against the protesters brought by Blok.

It’s noteworthy that in all three cases of community resistance cited above, victories – however temporary – have been won without the involvement of political parties; indeed, in some cases in direct defiance of political parties. It’s a testament to what can be achieved when determined and courageous communities join forces with talented and committed human rights lawyers.