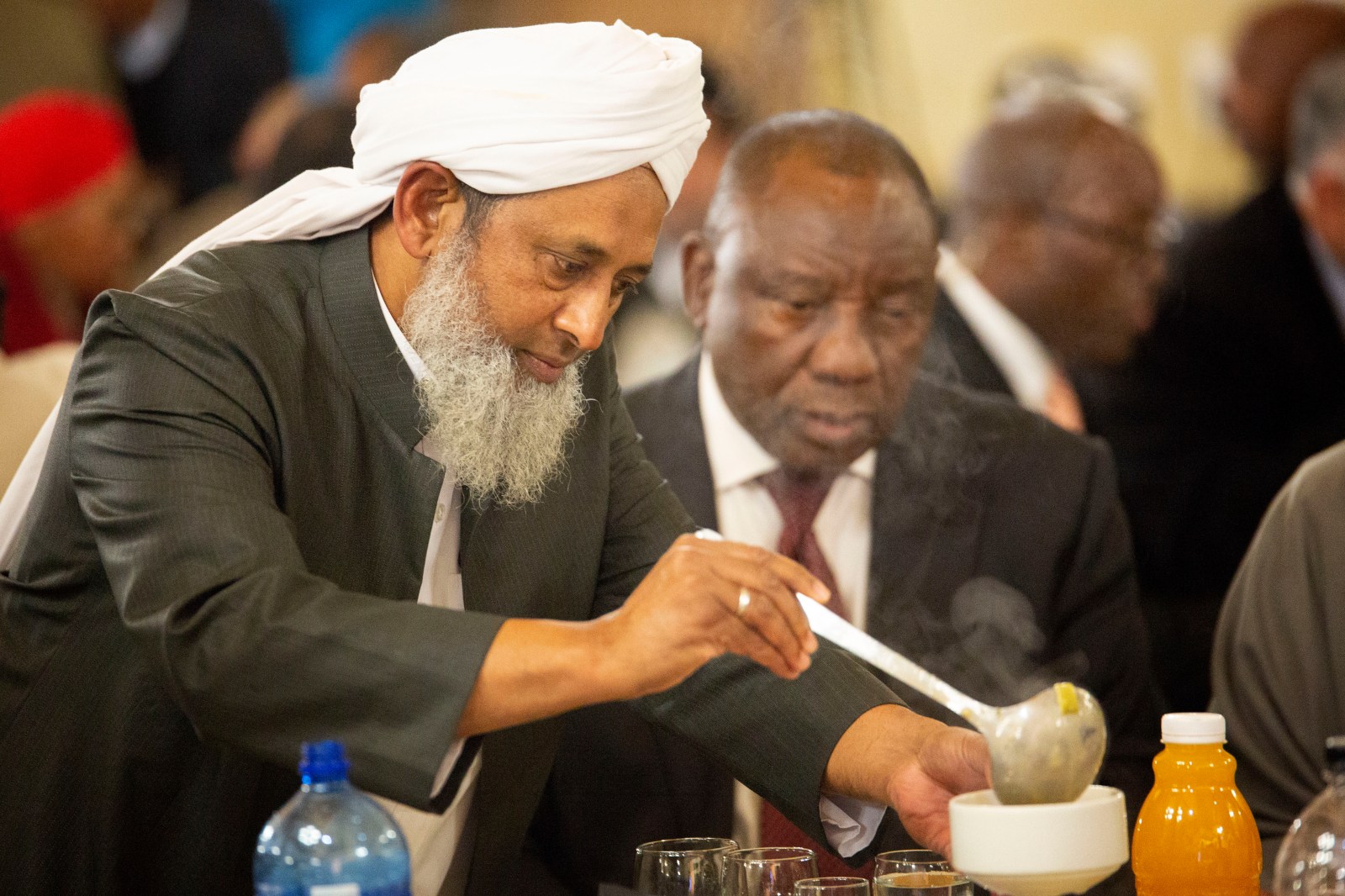 President Cyril Ramaphosa was at his most charming on Wednesday evening as he joined members of Cape Town’s Muslim community for a Ramadan dinner and prayers. Promising to address issues ranging from gentrification to the Muslim Marriages Act, Ramaphosa again made it clear: the ANC is dead serious about winning back the Western Cape in 2019.

President Cyril Ramaphosa knows how to work a crowd. At an iftaar dinner in Rylands Estate on Wednesday, he buttered up his Muslim audience with a nuclear level of charm, dropping in-jokes about the difficulties of fasting during Ramadan and pouring out gratitude for the contribution made by Muslims to South Africa.

It was a reminder to the audience that Muslims are at home in the ruling party – or, as Ramaphosa would later put it, that the Muslim community is “joined at the hip with the fortunes of the African National Congress”.

Pandor, called upon to introduce President Ramaphosa, did so in magnificently deadpan style.

“I’ve been wondering why I have been asked to introduce the president,” Pandor said, and paused, surveying the overwhelmingly male room. “I’ve decided it is to show we are gender-sensitive.”

The event was an initiative of the Muslim Judicial Council (MJC), and before Ramaphosa took to the speaker’s lectern, MJC deputy president Shaykh Riad Fataar presented the president with a laundry list of the community’s current concerns.

Many were Cape Town-specific. Fataar hit out at the gentrification of the city and the rise in rates and taxes in areas like the Bo Kaap, which have seen heated demonstrations recently take place. The slow pace of land restitution in District Six was also raised as a concern, with Fataar claiming that the City of Cape Town refuses to release land in the inner city due to concerns about the effect on house prices.

He called on Ramaphosa to establish a dedicated gang unit to combat the Western Cape scourge of gangsterism and drugs, to take decisive action against illegal land invasions, and to incentivize the building trade where many Muslim artisans once made a thriving living.

Fataar thanked the ANC for the “progressive position” it took in inviting the leader of Palestinian group Hamas to visit South Africa in 2015, and called for “full diplomatic withdrawal from the Apartheid state” of Israel.

In response, Ramaphosa stopped short of endorsing this action or speaking at length about Israel or Palestine. He said merely that the Palestinian people’s “struggle for self-determination, peace and justice” must be supported.

The President lavished praise on the Muslim community’s “spirit of volunteerism”, which he described as “almost your second nature” and said it had been an inspiration for his “Thuma Mina” campaign.

“When I see you at work advancing the interests of people who are less [well] off, particularly as you think of them so deeply and completely during the month of Ramadan, I’m always so deeply, deeply impressed,” Ramaphosa said.

Noting that Islam was a banned religion in South Africa for over a century, Ramaphosa assured the audience:

“Your religion will never, ever, ever be banned again. Not in South Africa.”

While promising action on some Muslim-specific issues, such as the Muslim Marriages Act, Ramaphosa also took advantage of his platform to reiterate the ANC’s desire to reclaim the Western Cape in 2019.

“We know that you too have been deeply pained by the fact that the ANC is no longer the governing party in this province,” the President said. “We aim to change that.”

“Inshallah!” (God willing) cried a man in the audience.

Referring to the appointment of former ANC Premier Ebrahim Rasool as the ANC’s elections head for the Western Cape, Ramaphosa said: “Rasool will lead a very ethical, very effective election campaign”. He asked for Muslim input in the campaign.

Ramaphosa did not mention the DA by name once, but included a number of side-swipes at the Western Cape’s governing party’s policies.

“Cape Town seems to be continuing along the path of Apartheid spatial planning,” he said, assuring the audience that the ANC’s land policies were also aimed at unlocking land in the city centre.

Said Ramaphosa: “What Apartheid did was to abrogate to a minority of citizens 87% of the land and just give us” – he gestured around the room – “13%”.

Anyone who thought that the ANC’s talk on land was just empty promises, he said, was in for a nasty shock.

“Even in Parliament I don’t have to answer questions as difficult as this,” Ramaphosa joked, adding, in reference to a recent National Assembly spat with DA chief whip John Steenhuisen. “I don’t have to say ‘shut up’ to anybody.”

In response to a suggestion that the Bo Kaap be designated a “living heritage” area in order to prevent families being forced out by new property developments, Ramaphosa said: “I could not agree more”.

When an audience member voiced a concern that the Western Cape Education Department might permit school governing bodies to sell alcohol in schools, Ramaphosa dismissed it immediately.

“We would never support having alcohol being sold in schools,” he said. “The overriding law is the law of the republic.”

In between addressing the audience, Ramaphosa ate a traditional iftaar dinner and joined worshippers to pray in a separate room – an experience he described as deeply meaningful.

“Certainly tonight I feel part of this community,” he said.

It was a charm offensive to melt the most hardened heart – and further proof that when it comes to the Western Cape in 2019, the ANC is holding nothing back. DM