Gigaba – out of Cabinet, but still in a forgiving ANC 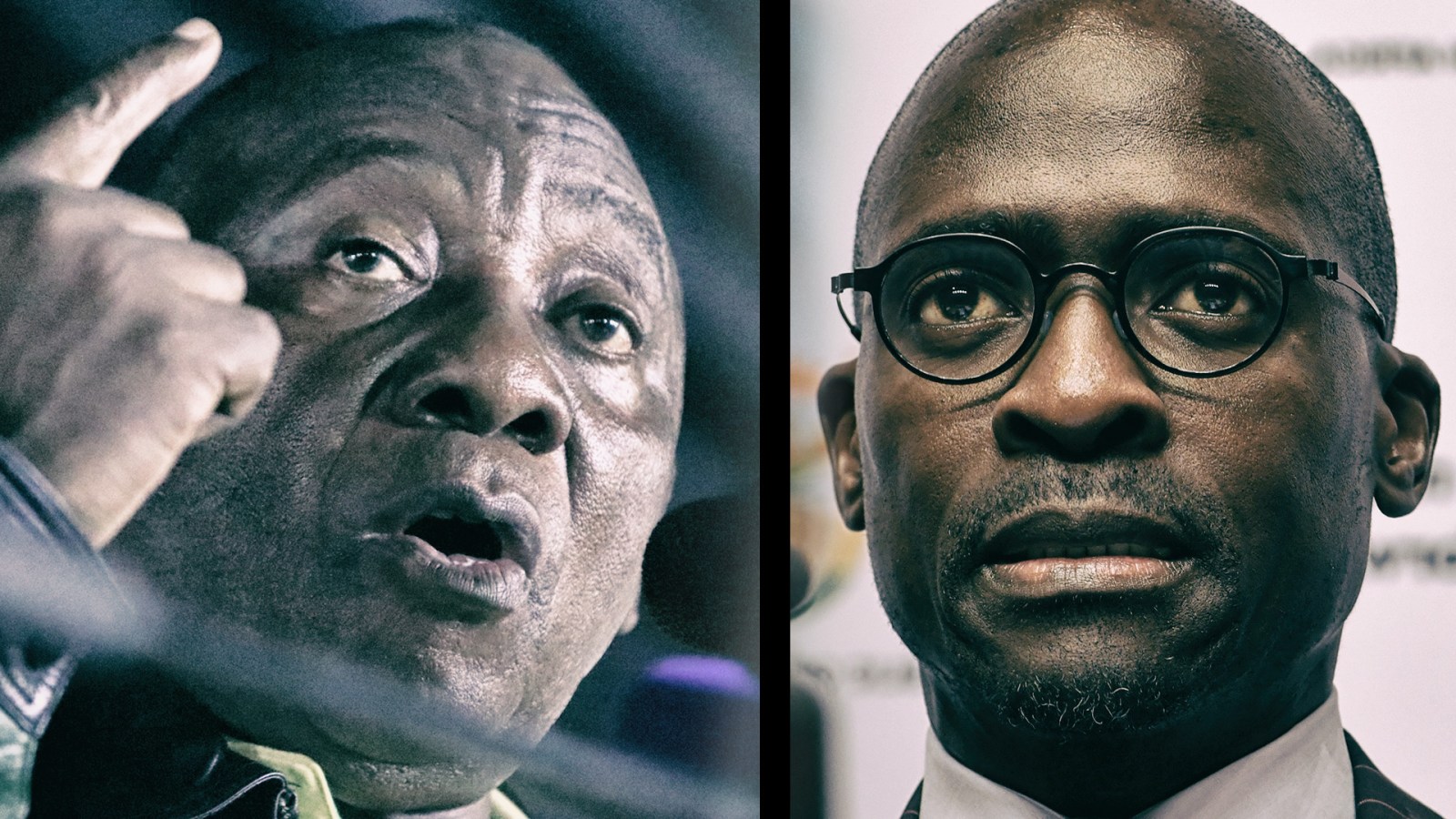 Malusi Gigaba’s resignation letter said he’s “stepping aside” as home affairs minister in the interest of South Africa and the governing ANC he belongs to. But the reality is that after a hard-fought fightback, by Tuesday the career politician had run out of options, and was facing presidential sanction that would dictate his political future for him. For Gigaba, Tuesday meant facing political realities – and taking the bitter medicine to survive to another day.

This article was updated with the latest development on Thursday 11.15am.

Malusi Gigaba on Tuesday became the second ANC Cabinet minister in just five weeks, to the day, to fall on his sword. But while Nhlanhla Nene, on 9 October, resigned forthwith as finance minister when he was caught out lying about not meeting the Guptas and then also as ANC MP, Gigaba’s “stepping aside” came at the end of a hard-fought fightback by a professional politician who had been widely touted as a future president.

There was a series of print and television interviews in which Gigaba in early November claimed there was a political smear campaign against him, including political and financial blackmail. All indications were that until the president, or the ANC, told him otherwise, he’d stay put.

Then followed Friday’s meeting with President Cyril Ramaphosa, which City Press reported was an effort to save his ministerial position by giving the president his side of the story.

Gigaba has maintained he’s done nothing wrong. That line of “It wasn’t me/ I didn’t do it/ I didn’t know” had served the minister well for a while. And it worked until a perfect storm brought together a leaked solo sex tape, the Oppenheimers testifying under oath in Parliament that Gigaba had given permission for their private airport terminal, the Constitutional Court dismissal as “no prospect of success” in his bid to overturn three other courts’ findings that he had lied under oath, and the public protector’s finding that Ramaphosa had to take disciplinary steps because lying under oath was a breach of the Executive Ethics Act and codes.

In early March 2018 Gigaba maintained he had done nothing wrong and didn’t know, in his seven-hour testimony to the parliamentary inquiry into State Capture at Eskom, and his written submission, labelled “draft 21” on the cover page, on his time as public enterprises minister from November 2010 to May 2014. The intention was to show how he had nothing to do with the seeds of State Capture that started in the power utility – coincidentally, it was on Gigaba’s watch that there was a major Eskom governance repurposing – that led to, for example, the facilitation of the sale of the Optimum coal mine to the Gupta-linked Tegeta with a R600-million pre-payment for coal deliveries.

That it wasn’t him was also the line to the home affairs committee on at least two occasions in 2018 when if finally did get down to inquiring about the naturalisation of several members of the Gupta family, a recurrent question among MPs.

“I am confident that this process will assist Parliament and the country, at large, to establish, beyond any shadow of doubt, that the various allegations underpinning the request for the committee to investigate my involvement in State Capture through the granting of citizenship to the Guptas are without basis, whatsoever,” Gigaba told MPs in October 2018 during a session that went on late into the night.

And he also tried to do that on Tuesday last week at the home affairs committee when he dodged direct questions on lying under oath, and why Nicky Oppenheimer would testify before MPs under oath that Gigaba had approved the private terminal at OR Tambo International Airport. And there were minutes of that meeting of 28 January 2016, which neither the minister nor anyone from his office changed or amended in any way. MPs shut Gigaba down.

By then matters had changed. Gigaba tried the usual “It wasn’t me/ I didn’t know” with a dollop of smear campaign and blackmail to make himself a victim. But the times when such political victimhood was deemed acceptable, during the Jacob Zuma administration through the example set right at the top by the president then, no longer quite works.

And that perhaps is one of the key indicators that Ramaphosa as president of a still deeply, if not necessarily publicly factionalised party and government, is shifting the goal posts. Even if it is at a snail’s pace.

Now for the first time Gigaba has found himself in such a tight spot in 14 years since joining the executive as deputy home affairs minister in 2004, and eight years after becoming if not the youngest, then one of the youngest ever Cabinet ministers, in November 2010 when he was appointed to the public enterprises portfolio.

On Tuesday there were a couple of things Gigaba did. He’s filed papers to review the public protector report in a move that would effectively suspend her findings of presidential disciplinary action against him until the review was done. It didn’t quite go according to plan, but the papers were filed and a case number is expected to be formally issued on Wednesday.

But Gigaba, according to News24, also met fellow ANC comrades. Ekurhuleni Mayor Mzwandile Masina is quoted as saying that he, and others, had met Gigaba on Tuesday morning to advise him that “the writing is on the wall and that it was best for him to resign… To stay on and wait to be fired is arrogant”.

That is important. Because like the home affairs committee, including its ANC MPs, shutting Gigaba down – protocol obsession means even the most trite, tedious and tenuous presentation is “appreciated” in such meetings – such advice from comrades is an indication that a strategic regroup was urgently required. The ANC is forgiving to those who humble themselves, self-correct and return to the centre. Hence the narrative of “stepping aside”, a clear echo of recent ANC integrity commission calls for those on the wrong side of public attention to step aside.

Tuesday afternoon’s statement from the Presidency confirmed that Ramaphosa had accepted the minister’s letter of resignation that indicated Gigaba “was stepping aside for the sake of our country and the movement to which he belongs. Further to relieve the president from undue pressure and allow him to focus on improving the lives of the people of South Africa and for him to do the best he can to serve the country and save it from this economic meltdown”.

The ANC in a statement noted Gigaba’s departure from Cabinet, emphasising that this was not an admission of guilt.

“Comrade Malusi’s decision to step aside is a sign of the increasing maturity of our democracy and of leadership willing to put the country ahead of the their own individual situations,” the ANC statement said.

“He truly acted in the spirit of the 54th ANC National Conference (in December 2017), which calls upon all cadres of the ANC at all times to act in the interest of the movement and the country at large. This gesture will help restore the integrity and values of the movement.”

ANC tripartite alliance partner, the South African Communist Party (SACP), picked up the narrative, saying it “commended” Gigaba for this step and the reason of putting the interest of the country and ANC first.

And Parliament’s home affairs committee chairperson, ANC MP Hlomani Chauke, fell in line to acknowledge “the selfless and principled decision taken by the Minister to resign following damning findings by the public protector and the Constitutional Court”.

Gigaba’s stepping aside on Tuesday has helped clear a headache for Ramaphosa, who would have had to act against his minister otherwise with an unknown political risk in the factionalised ANC. Maybe that’s one for the political good books to be called in in future by Gigaba, which is not a bad chip to have.

Opposition parties welcomed Gigaba’s resignation following the most recent controversies, although many pointed out that stepping down did not absolve him from being accountable.

* By Tuesday evening Gigaba had not resigned as ANC MP. If he stays on, he would have to face an ethics inquiry by Parliament regarding the public protector’s findings. But with the maximum penalty a fine of a month’s salary and a public rebuke in the House, that penalty compares to what the president may have done.

For Gigaba, who is in his mid-40s, Parliament would not be a bad place to relaunch his political career with a firm eye on fulfilling those predictions of being a future president. Sitting on the ANC back benches, alongside several of his former colleagues in the executive, or maybe becoming a committee chairperson, may mean a significant cut in salaries and benefits such as bodyguards, but it’s also an opportunity to make a comeback.

The scene is set. DM

Update: On Thursday morning the ANC in parliament confirmed that Gigaba had also resigned as an MP.