Gigaba denies any Gupta wrongdoing – but squirms under questioning 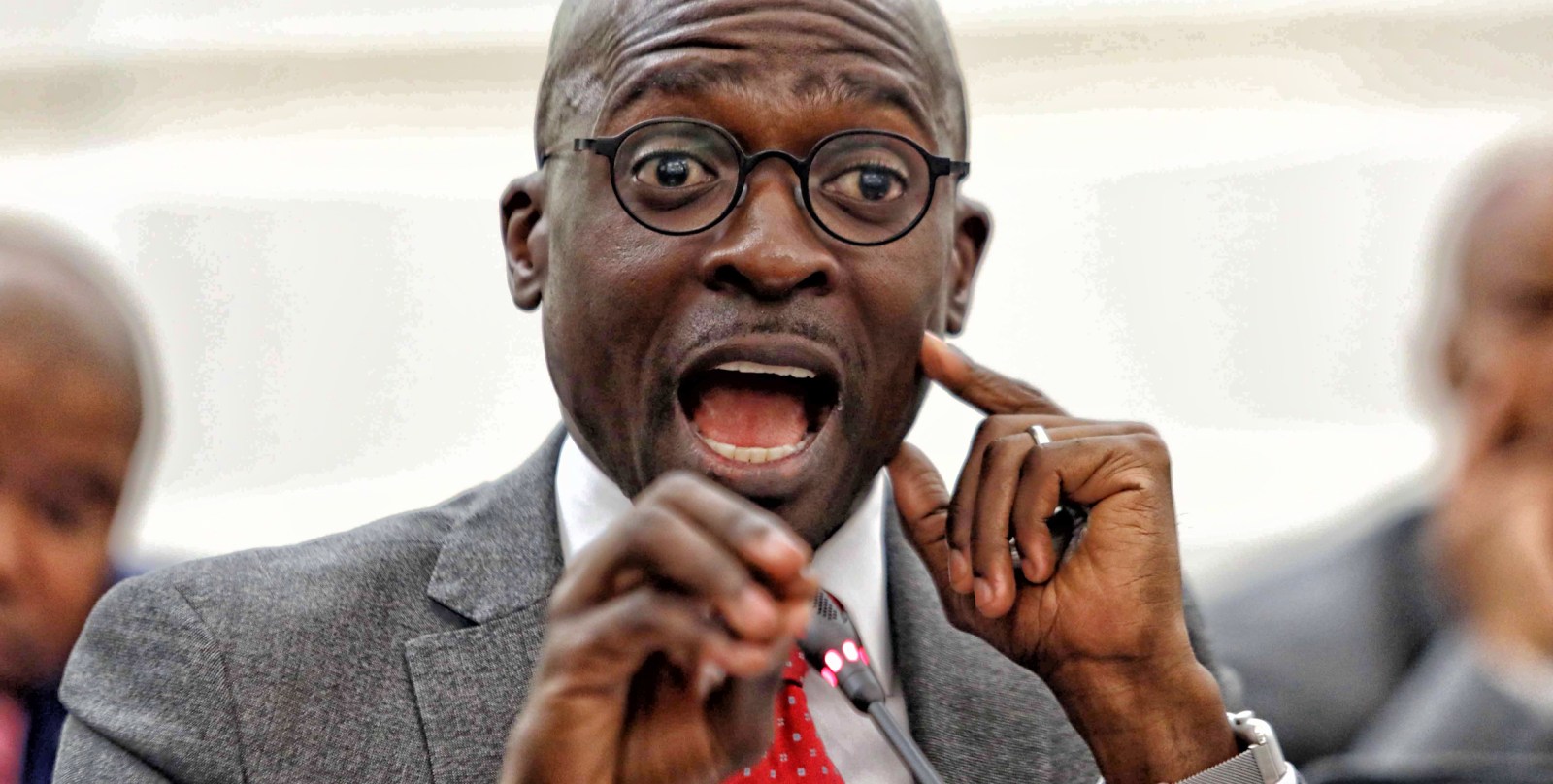 Minister of Home Affairs Malusi Gigaba finally got his chance on Tuesday evening to address the Parliament committee investigating the early naturalisation of the Gupta family. Anyone expecting a repeat of now-axed Finance Minister Nhlanhla Nene’s confessions to the Zondo Commission was in for disappointment. Gigaba admitted no wrongdoing whatsoever when it came to his dealings with the Gupta family – yet started to sweat when pressed.

To say that Minister Malusi Gigaba came out all guns blazing before Parliament’s Home Affairs committee on Tuesday evening would be an understatement.

Gigaba entered the inquiry into the Gupta family’s early naturalisation primed for battle.

“I am confident that this process will assist Parliament and the country, at large, to establish, beyond any shadow of doubt, that the various allegations underpinning the request for the committee to investigate my involvement in state capture through the granting of citizenship to the Guptas are without basis, whatsoever.”

The Home Affairs Minister would reiterate this denial in countless different ways, denying any personal relationship with the Guptas or having extended any special assistance to the family.

The Department of Home Affairs’ decision to grant the Guptas early citizenship was the result of “due process” being followed.

“Not a single step was overlooked,” Gigaba said.

But later, in a bewildering turnaround, Gigaba would admit that he “took it on good faith” that department officials had verified the overblown claims about the Guptas’ investment in South Africa that the family used as the basis for their application.

“Insufficient diligence”, in fact, was done.

“We try to ensure families are not separated,” Gigaba said.

On the basis of the evidence presented to the committee thus far, Gigaba stated that he had been unable to identify “any evidence of wrongdoing on my part”.

He dismissed the #GuptaLeaks emails sarcastically as “hardly a substantiation” of the idea that he had given the Guptas special treatment, pointing out that the email trove had contained no communication directly between him and any member of the Gupta family.

Gigaba acknowledged, however, that his advisor Thamsanqa Msomi had been in email contact with Gupta lieutenant Ashu Chawla. He denied that there was anything untoward about this correspondence.

Responding to the claim that Home Affairs official Ronald Steyn had been removed from his post in New Delhi in 2016 to be replaced with the more Gupta-compliant official Gideon Christians, Gigaba said that Steyn’s redeployment was an operational necessity.

Gigaba said that the South African High Commissioner in India had complained about the backlog in processing Indian visas, and Gigaba had subsequently been advised that Steyn was a “mis-match” in the position and an official more “suited to the environment” should replace him.

The minister read his prepared submission with a focused, intense composure. But when MPs were given their chance to probe his answers further, Gigaba immediately displayed signs of being rattled.

It was the DA’s Haniff Hoosen – an MP who has emerged as the clear star of the inquiry with his calm but incisive questioning – who went in on Gigaba with the ruthless efficiency of a sniper.

One seemingly straightforward question – “How would you describe your relationship with the Gupta family?” – was enough to visibly disturb Gigaba, who turned hostile and appealed to committee chair Hlomami Chauke for protection.

He was referring to a paragraph in his submission in which Gigaba acknowledged attending a number of Gupta-hosted social functions as part of his mandate as a public representative engaging with “stakeholders”.

Gigaba had also specified in his submission that “other Cabinet ministers” were present at the events he attended with the Guptas.

Under interrogation from Hoosen, Gigaba squirmed and shifted his way around providing any details of his engagements with the Guptas.

Initially, the minister said that he had attended no more than three Gupta-hosted events. Minutes later, Gigaba conceded that he may have visited the Gupta’s home in Saxonwold “five or so times”.

Gigaba could not recall the details of these occasions. He accused Hoosen of “straying” from the mandate of the inquiry with “irrelevant” questions.

“Minister, I ask the questions here. You answer them,” responded an unruffled Hoosen.

Gigaba claimed that his motivation for accepting Gupta invitations was that of “social cohesion”, suggesting that his background in KwaZulu-Natal made him sensitive to the need to accommodate Indian and Hindu constituents.

“We were not buddy-buddy,” Gigaba insisted.

Hoosen persisted in this line of questioning, and Gigaba eventually admitted that he “started going to Saxonwold” before his tenure at Home Affairs.

He had known the Guptas for “possibly ten years”, he estimated.

No, a Gupta had never called him on his cellphone. No, Gigaba has never met a Gupta outside the country.

The latter question caused Gigaba to giggle as he issued his denial.

Committee chair Chauke, who had spent the rest of the day cross-examining witnesses with the ferocity of a pitbull, appeared to abandon some of his thirst for answers once Gigaba was in the hotseat. On several early occasions Chauke, an ANC MP, intervened on Gigaba’s behalf.

“You don’t deal with due diligence, you only deal with the final product,” Chauke reassured Gigaba at one point.

The chair also excused Gigaba from responding to another Hoosen zinger: a request for Gigaba to provide the names of the other Cabinet ministers who had attended Gupta events with him.

As the clock ticked past 1am on Wednesday – marking the 14th straight hour of the committee’s sitting – Chauke did the lion’s share of the talking, with a rambling monologue of his concerns about Home Affairs processes. Cynical observers might have suspected that Chauke was attempting to drive his fellow MPs to a point of fatigue where they could no longer muster the energy to question Gigaba.

But there was still a spark of life in EFF MP Hlengiwe Mkhaliphi, who questioned why Gigaba used his discretion to grant the Guptas early citizenship when the family was “already in the public eye” for negative reasons at the point when the minister signed off on their application.

For that reason alone, Mkhaliphi suggested, Gigaba should have scrutinised their application very closely.

Gigaba’s defence was that in 2015, when the Guptas’ application was processed, the Public Protector’s ‘State of Capture’ report had yet to be released.

The notion that the Guptas were already in the public eye in 2015, Gigaba said, was “not supported by fact”. He acknowledged the negative press around the Guptas’ 2013 use of the Waterkloof air base for a family wedding, but said it was “nothing to do with me” and hence irrelevant.

“It’s quite clear that the department followed the process [to approve the application],” he said, despite having already conceded several times that an adequate process was not, in fact, followed.

When the committee began its business on Tuesday morning – back in a bygone era where Nhlanhla Nene was still the country’s finance minister – Chauke had thundered that the inquiry would accept “nothing else but the truth”.

By the end of Gigaba’s testimony in the early hours of Wednesday, it was still far from clear if that lofty goal had been reached. DM