Dan Plato: The silent majority on the Cape Flats must start taking responsibility for gangsterism 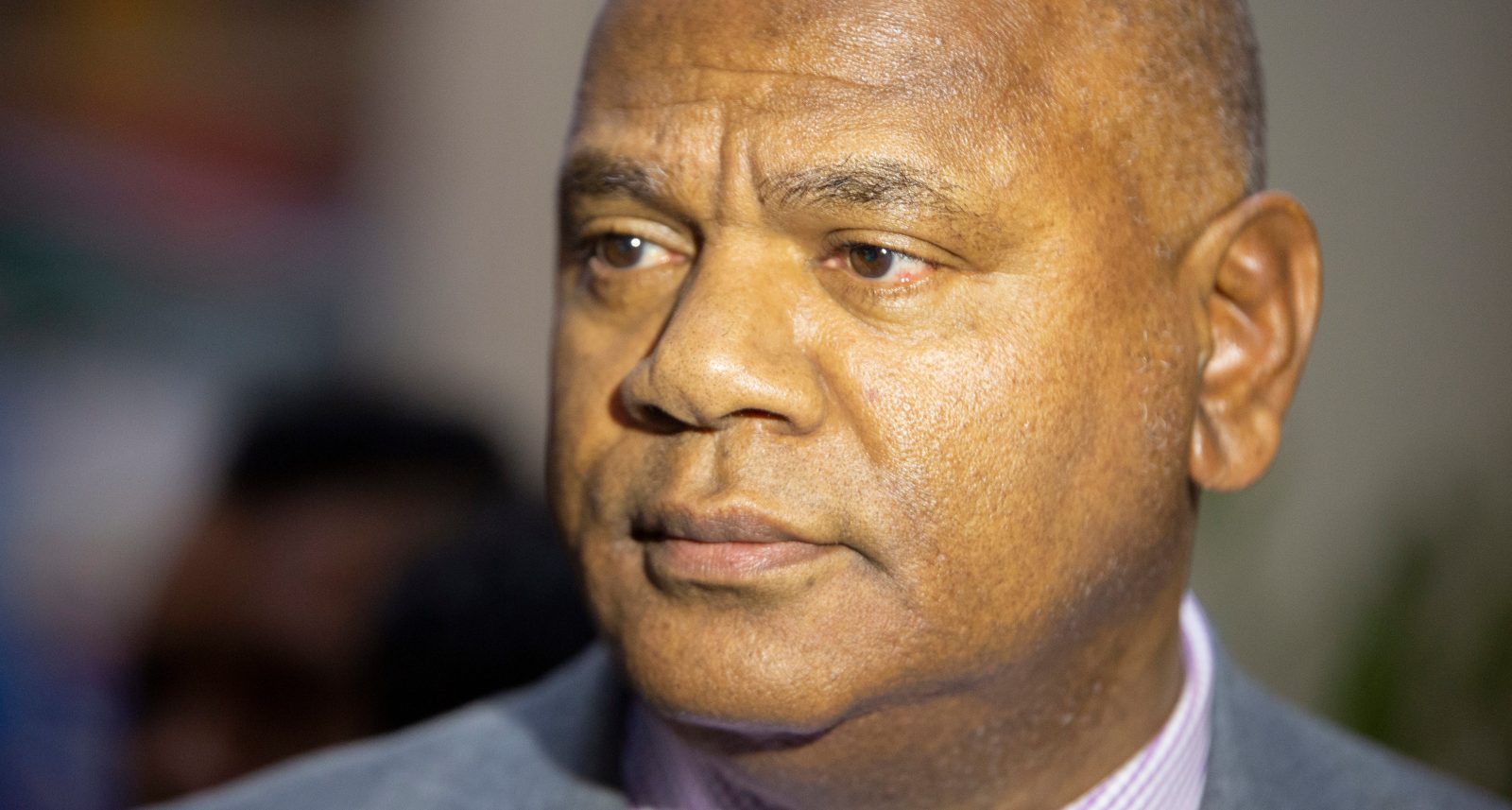 Gangsterism and crime can be contained if community members on the Cape Flats stand up to gang members, says Dan Plato, MEC for Community Safety in the Western Cape. He spoke to Daily Maverick before his return later this week to the City of Cape Town as mayor, for the second time — that is, if Patricia de Lille vacates the mayoral office as planned.

Getting rid of crime on the Cape Flats was not only a governmental responsibility; communities needed to start taking responsibility for the cycle of gangsterism in their neighbourhoods.

Dan Plato made this point clear during an interview with Daily Maverick — as outgoing Community Safety MEC and incoming City of Cape Town mayor, if mayor Patricia De Lille vacates her office as planned on Wednesday, 31 October.

“What I’m trying to say is, the community will never refer back to themselves, they’ll never refer to their involvement or their children’s involvement in gangs — they’ll always point fingers to the government and their councillors.

“The answer often doesn’t lie with just the police or just with the government, the answer lies with the silent majority in the community. I said I would support Reclaim (Bonteheuwel) as long as they stay within the law, because it was part of my job (as MEC for Community Safety), but the silent majority must stand up against these evils in their communities — this gangsterism that they accept.”

While communities in Cape Town have grappled with gangsterism, crime and substance abuse for decades, areas that are most affected are predominantly impoverished “coloured areas” as they were demarcated during apartheid.

This begs the question, is gangsterism a problem that occurs mostly in coloured communities across South Africa?

“Dis ’n siekte in ons gemeenskap” (It’s a sickness in our community), said Plato. During the interview, Plato spoke mostly Afrikaans, his home language, switching to English every now and then.

These social problems were greater “in our coloured communities”, he said, adding: “We need thorough research to unravel why it is that our own coloured folk are easily susceptible to drug use and drug addiction and why our people are so susceptible to gang violence and gang culture.

“Many of our grown-ups in our communities support these gangsters — because they’re poor and they don’t have an income. They’ll store the gangs’ drugs and guns. When the police come to raid gangsters’ homes there’s never drugs, there’s never firearms. But the moment the police turn their backs on these homes, then the drugs come out — then the drugs flow again.”

In 1996, he was appointed ward councillor for areas such as Belhar, Uitsig and Ravensmead. Between 2006 and 2009, he was the Mayco member for housing.

When the DA’s Helen Zille became premier of the Western Cape after the 2009 general elections, Plato became mayor of the City until the 2011 municipal elections when Patricia de Lille took the mayoral chain. Plato then became MEC for Community Safety, a position he is due to vacate on 31 October, when he is scheduled to take over from De Lille — who has not yet revealed her plans when she leaves office after protracted conflict with the DA.

Questions have been raised about whether De Lille will in fact exit as planned on Wednesday. At her “farewell” speech last Thursday, five DA councillors resigned from the party in support of her. She has announced plans to challenge a report by law firm Bowman Gilfillan that implicates her in the cover-up of tender fraud and corruption. Her plan to legally challenge the report has led to some speculation that her departure could be delayed.

When the DA announced that Plato would become mayor two months ago after a deal was struck with De Lille to step down, opposition parties were quick to criticise him. “Stand-in Dan was the worst MEC for Community Safety the province has ever had,” said Faiez Jacobs, ANC provincial secretary in News24. The African Christian Democratic Party has labelled Plato as “mediocre”.

When he steps into the mayor’s office, he will face crime-related issues that have made headlines in the past few months, yet have been prevalent for decades. Seven of the country’s top 10 murder precincts are in the City of Cape Town, including Khayelitsha, Delft, Philippi and Nyanga, with police under-resourcing identified as a major factor in the high crime rate.

Plato will have to grapple with the unequal distribution of police resourcing, which further adds to the city’s high crime rates.

In Delft for example, there are 168 police officers per 100,000 people, compared with a more affluent area such as Rondebosch, which has 556 policemen available per 100,000 people. (See Daily Maverick’s previous feature on policing in Delft available here.)

Zoning into some of of his controversial strategies and views about crime management, he defended the DA’s persistent call for army deployment in areas on the Cape Flats. In July, the DA held a march from the Manenberg police station to the Nyanga police station. At the march, deputy police minister Bongi Mkongi accused the DA of making crime a “political issue”.

Daily Maverick asked Plato about whether calling for army deployment was problematic as it could trigger memories among residents who lived under apartheid. However, Plato suggested otherwise.

“The police are struggling, and the army needs to be seen as a force-multiplier,” he said.

The army was “successfully” deployed to Lavender Hill in 2015, he said, with “no funny incidents” taking place.

“I still have newspaper clippings from that era were church leaders and residents from Lavender Hill said it was the best Christmas they had in ages — a Christmas without violence.”

The army served as a deterrent for gang activity, said Plato. Gangsters knew most soldiers were sharpshooters, he said.

“Shoot at the army and the army shoots back. Where the skollie will not shoot correctly, one bullet from an army official and you’re dead… and the skollies know this.”

During September and October, areas on the Cape Flats held early-morning shutdowns calling for more police visibility and an end to gangsterism. A day after the initial shutdown, tensions rose during a meeting between residents, Mayco member for safety and security JP Smith, Bonteheuwel ward councillor Angus McKenzie and national police minister Bheki Cele.

During the meeting, Smith and McKenzie were forced by residents to leave the meeting, but Plato offered a different suggestion about what happened that day:

“Vanguard Drive was closed, police detained some of them (some organisers of the shutdown) and there were claims the police were heavy-handed. Minister [Bheki] Cele was there — that’s where they removed JP Smith and councillor [Angus] McKenzie from the meeting. The incident happened yesterday and tomorrow they come and see me. The leaders talked about violence and the leaders talked about what I was doing, etc, etc.”

Plato said the reason Smith and McKenzie were removed was because people in the community knew they were not the correct people to speak to them about policing in the area — it was a task for the national minister.

He said “people understand this”, referring to the suggestion that policing, ultimately, was a national government responsibility, not a provincial or municipal responsibility.

But Plato knows the problems on the Cape Flats won’t go away easily, and said “even the incoming MEC will sit with those problems”.

Ahead of his second term as mayor, what will Plato do differently?

He said he would bring some of the projects he has implemented as MEC of Community Safety into the City. This includes more roll-outs of the Walking Bus projects and giving more bursaries to disadvantaged learners to study at FET colleges. DM