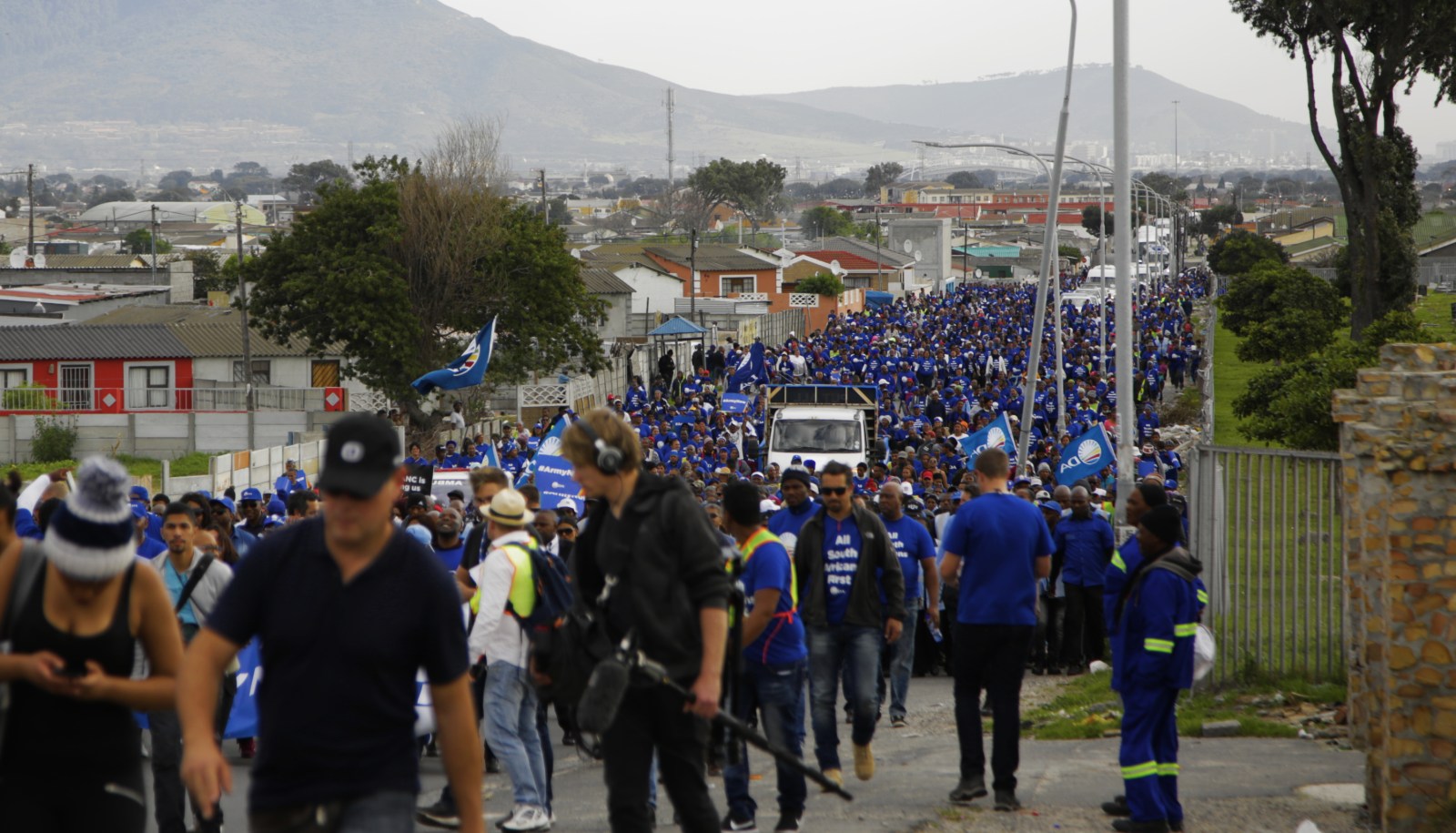 On Thursday morning the DA hosted a march from one of the gang hotspots on the Cape Flats to Nyanga, the “murder capital of the country”, calling on the minister of police to #SendTheArmy to gang-infested areas. It didn’t take long before gang violence in the Western Cape turned into a political football between the DA and the ANC.

Several hundred people took part in the DA-led #SendTheArmy march from the Cape Flats to Nyanga with the aim of handing over a memorandum calling for the deployment of the SANDF to the Cape’s ganglands.

Addressing the crowd, opposition leader Mmusi Maimane accused former police minister Fikile Mbalula of lying when he promised to deploy the army to gang-infested areas by Christmas. “But Christmas came and went, and there was no sign of the army. And suddenly he was no longer police minister, and his replacement Bheki Cele was telling us there would be no army deployment,” Maimane said.

In turn, deputy police minister Bongani Mkongi accused the DA and Maimane, who he described as representing “white monopoly capital”, of only going to Nyanga because the party was losing support in other areas.

Mkongi was due to accept the DA memorandum but after exchanging tense words with Maimane, he stormed off, telling the crowd he didn’t want to accept the memorandum from the DA because the party made crime a “political issue”.

Thursday’s march was to call for the army to be deployed in gang-ridden areas on the Cape Flats. But residents of Heideveld were not convinced that it was a strategy that would work, with one resident asking “if they bring in the army, what next?”

Fifty-year-old Shafiek (who refused to give his surname) admitted to being a gangster in the past and told Daily Maverick “we can’t call the army, we have to sit, talk about things before we call the army.”

Shafiek said while he supported the call for the army as a solution, what would happen at night when the soldiers had to get rest?

“When they go home to sleep, they (the communities) will be sitting with the same thing, gangsterism.”

Khayelitsha resident Esethu Mgondo said she heard about the march through a Whatsapp group.

“I’m hoping the DA march will effect change” she said.

Mgondo supported the call for the army to be brought to Nyanga because “people are robbed day and night, people can’t be out after dark or before dawn”.

According to 2017 police statistics, Nyanga has the highest recorded murder and sexual offences rates countrywide with 281 murders and 356 sexual offence cases reported. 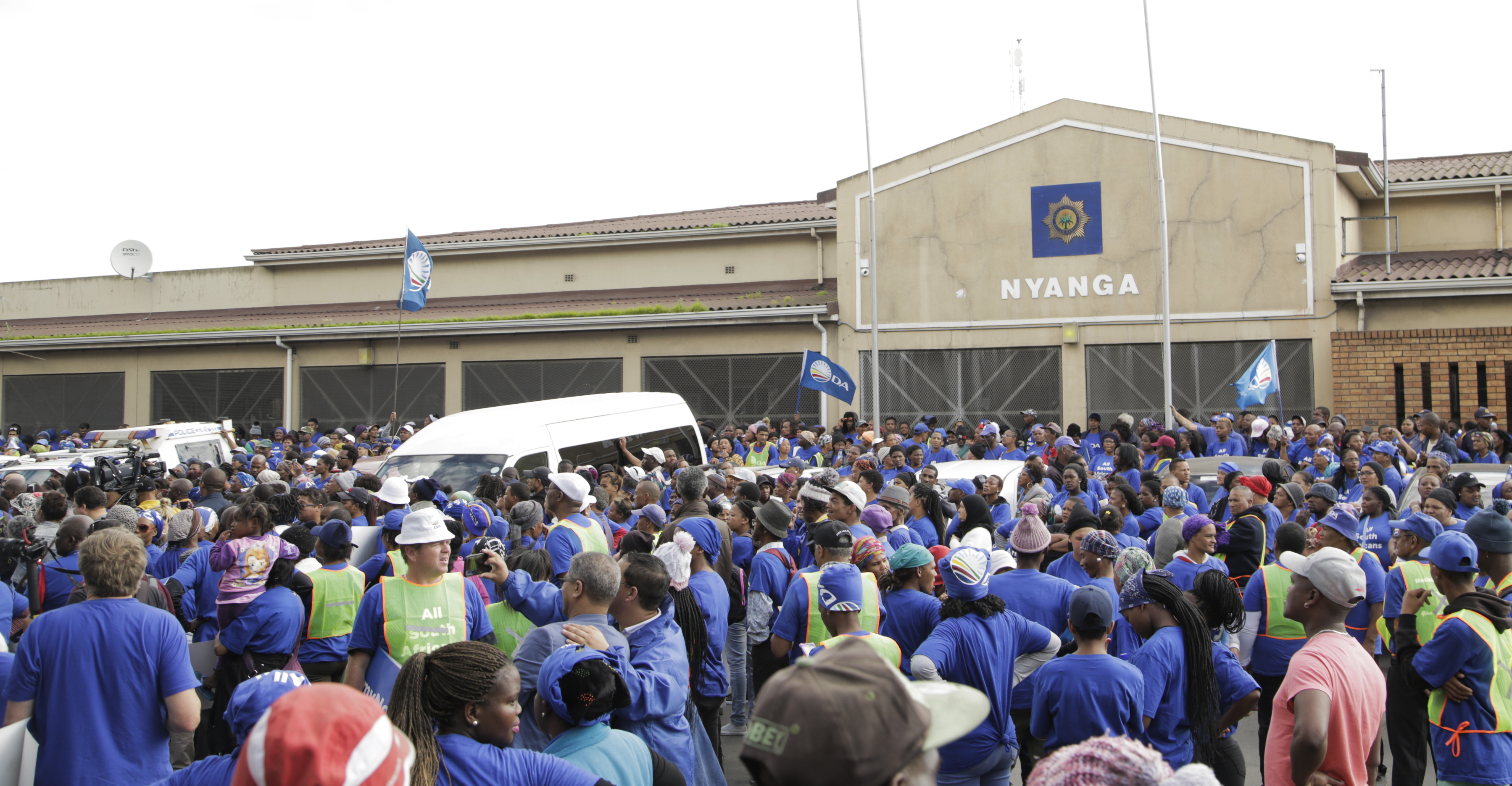 Heideveld, where the march started, falls under the Manenberg police station which recorded 55 murders and 133 sexual offences.

The call for the army to be deployed to areas on the Cape Flats comes after a surge in gang-related shootings in the past few weeks.

Over the weekend, eight people were killed in gang-related activity in Mitchells Plain.

Speaking at a media briefing while the march was under way on Thursday, police minister Bheki Cele said the SANDF would not be deployed to areas affected by gangs.

“There are things that they can’t tolerate that the police can. If the police look for a suspect, they must rather allow him to escape rather than [fire upon bystanders]. The army is not trained in that,” said the minister, as reported by News24. DM