DA wants to send the army into the Cape Flats – communities, not so much 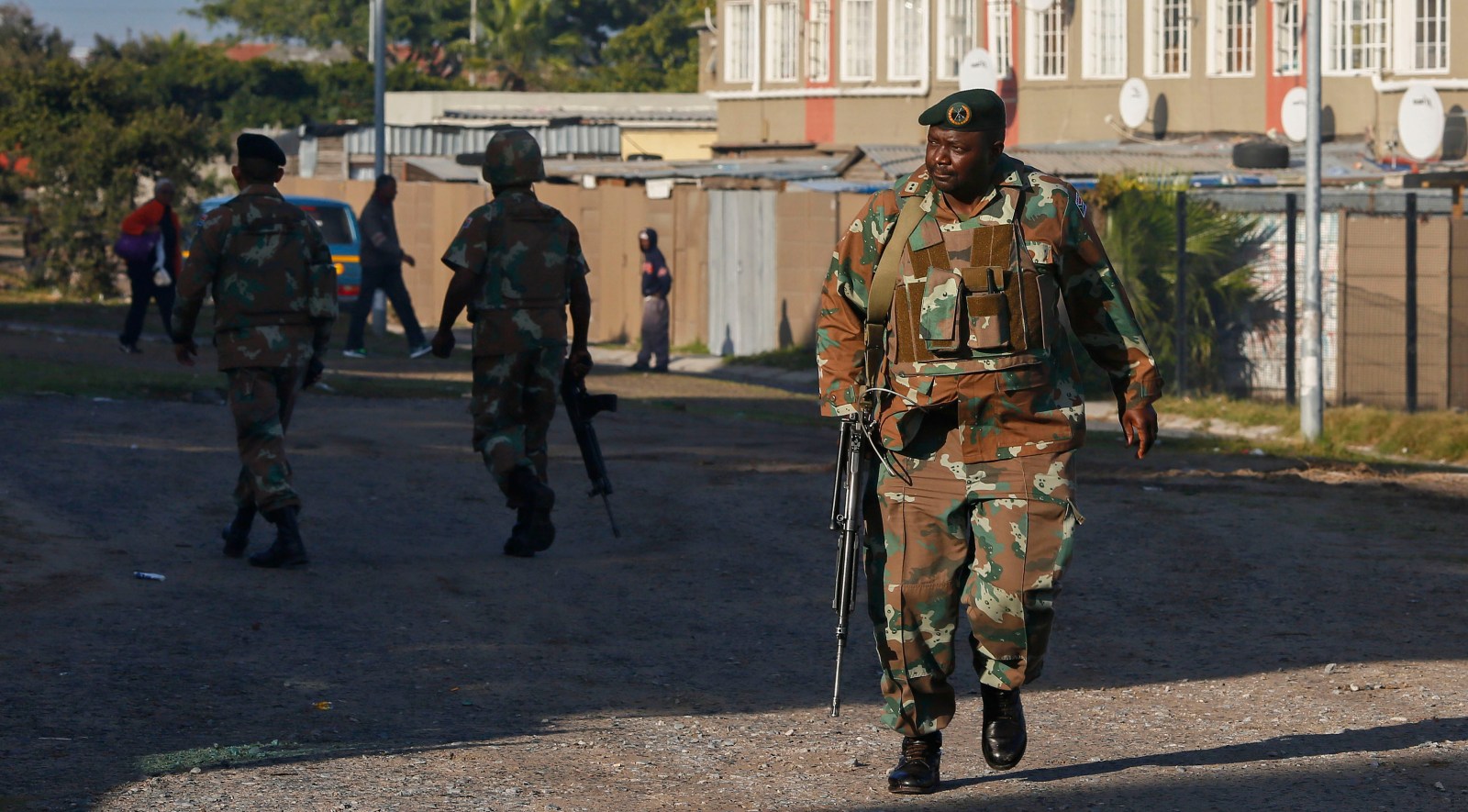 Western Cape authorities have requested the deployment of the army to address violent crime on the Cape Flats on 13 occasions over the past six years. On Thursday, the DA is hoping for a case of 14th time lucky, as it leads a #SendTheArmyNow march from Nyanga to Manenberg making the same call to government. Former police minister Fikile Mbalula seemed in favour of the idea; current police minister Bheki Cele disagrees. Community groups in the affected areas, meanwhile, have some reservations.

It is time for national government to send in the army to deal with gangsterism, drugs and violence in the Cape Flats.

That is the view of the DA, and on Thursday 19 July the party expects to lead “thousands” of Cape Town residents in a march to Nyanga police station to amplify the call.

The appeal appeared to land on receptive ears during former police minister Fikile Mbalula’s tenure, with Mbalula seeming in favour of the plan.

Mbalula told Parliament in October 2017 that the Presidency had been asked to approve the deployment of the army in crime hotspots not just in the Western Cape, but also Gauteng and KwaZulu-Natal. He said at the time that SANDF members would be used not as substitutes for police, but as reinforcements.

Yet in May 2018, Police Minister Bheki Cele shelved the plans. The DA is now calling on government to honour Mbalula’s commitment, which they say was made “officially and formally” on three separate occasions.

Exactly where the DA wants soldiers to go, what duties it wants them to undertake and for which period of time, has thus far been unclear.

On Wednesday, DA provincial spokesperson Odette Caron told Daily Maverick that the party would like the army deployed to “the areas in the Western Cape most prone to violent crime, gangsterism and drugs – which is why it is no coincidence that the march is taking place on the Cape Flats”.

Caron says that the period for which the army would stay on the Cape Flats would be at the discretion of President Cyril Ramaphosa, whose responsibility it would be to inform Parliament of the deployment.

She stressed, however, that a military presence would be a “temporary measure”, aimed at supplementing police rather than replacing them.

The presence of soldiers, says Caron, “is intended to serve as a deterrent to criminal activity”.

The army has been used in this manner before, for very limited periods. In 2015, soldiers were sent to areas including Manenberg as part of Operation Fiela, where they assisted metro and national police to carry out raids searching for guns and drugs.

But on that occasion, it was reported that the move backfired. Journalist Caryn Dolley wrote just two days later that gangs had intensified gun battles in Manenberg, with police “acknowledging that the gangsters have upped their violence in order to demonstrate that they, not the authorities, are in control”.

Security experts have previously urged caution in deploying the military to civilian areas due to the fact that soldiers receive different training to police.

This point is what seems to have dissuaded Police Minister Bheki Cele from acting on his predecessor’s commitments. Cele told a Mitchells Plain audience in May 2018 that based on his experience as a former soldier, he doubted that soldiers had the necessary expertise to make a positive contribution.

In response to a query from Daily Maverick, SANDF spokesperson Mafi Mgobozi confirmed that defence force members were not trained in aspects such as crowd control.

“The issue of crowd control is the SAPS’ responsibility,” Mgobozi said, adding that the military could only be deployed “in a supporting role” to police.

Caron says, however, that the DA would not want soldiers to control crowds or make arrests. It is simply hoped that the army’s presence would serve as a sufficient deterrent to criminals to free up the police “to fulfil their investigatory and arrest functions”.

The vision of soldiers and tanks on Western Cape streets is one that often causes emotive responses, with critics arguing in the past that it serves to criminalise whole communities rather than merely the perpetrators of violent crime.

“The army is not trained to prevent and investigate gang crimes. SAPS are better off reorganising and working with people who know something about the gangs.”

But the DA and the Western Cape government are not the only bodies to have made the call – in late 2017, the Federation of Unions of South Africa (Fedusa) marched to Parliament with a similar plea.

Presumably in a bid to pre-empt the DA’s march, Police Minister Bheki Cele has announced an early morning press conference for Thursday to explain “the impact and success” of Operation Thunder, a police initiative launched in May 2018 to crack down on gangsterism on the Cape Flats.

The timing of the DA’s march, less than a year before general elections, opens the party to accusations of opportunism.

“Manenberg is not in such need of the army now,” Manenberg Safety Forum chairperson Roegshanda Pascoe told Daily Maverick.

“Last year, when we were under gang warfare, yes. We did call on the army at that point and nobody supported us.”

“There was never a consultation with community structures of Nyanga. We don’t know what informs their decision to march now,” Makasi told Daily Maverick.

“The SAPS and the community working together in Nyanga have decreased crime in the first quarter of the financial year. We don’t want an army that is carrying automatic weapons in the streets. We need more police resources.”

Makasi claims that the City of Cape Town’s own law enforcement agencies are not visible in Nyanga.

“We say they are operating like they are a fire brigade – they only come here on invitation. It’s easy to march and say government must deploy an army, but they themselves can’t deploy their own structures in Nyanga.”

Pascoe says provincial authorities should be focusing on addressing the underlying causes of gangsterism and drug abuse rather than the “quick fix solution” of a military deployment.

But she is not opposed in principle to the idea of the defence force being sent to the Cape Flats.

“The army is trained to go and make war on a battlefield,” she says.

“Well, where we are staying there is a big war going on.” DM