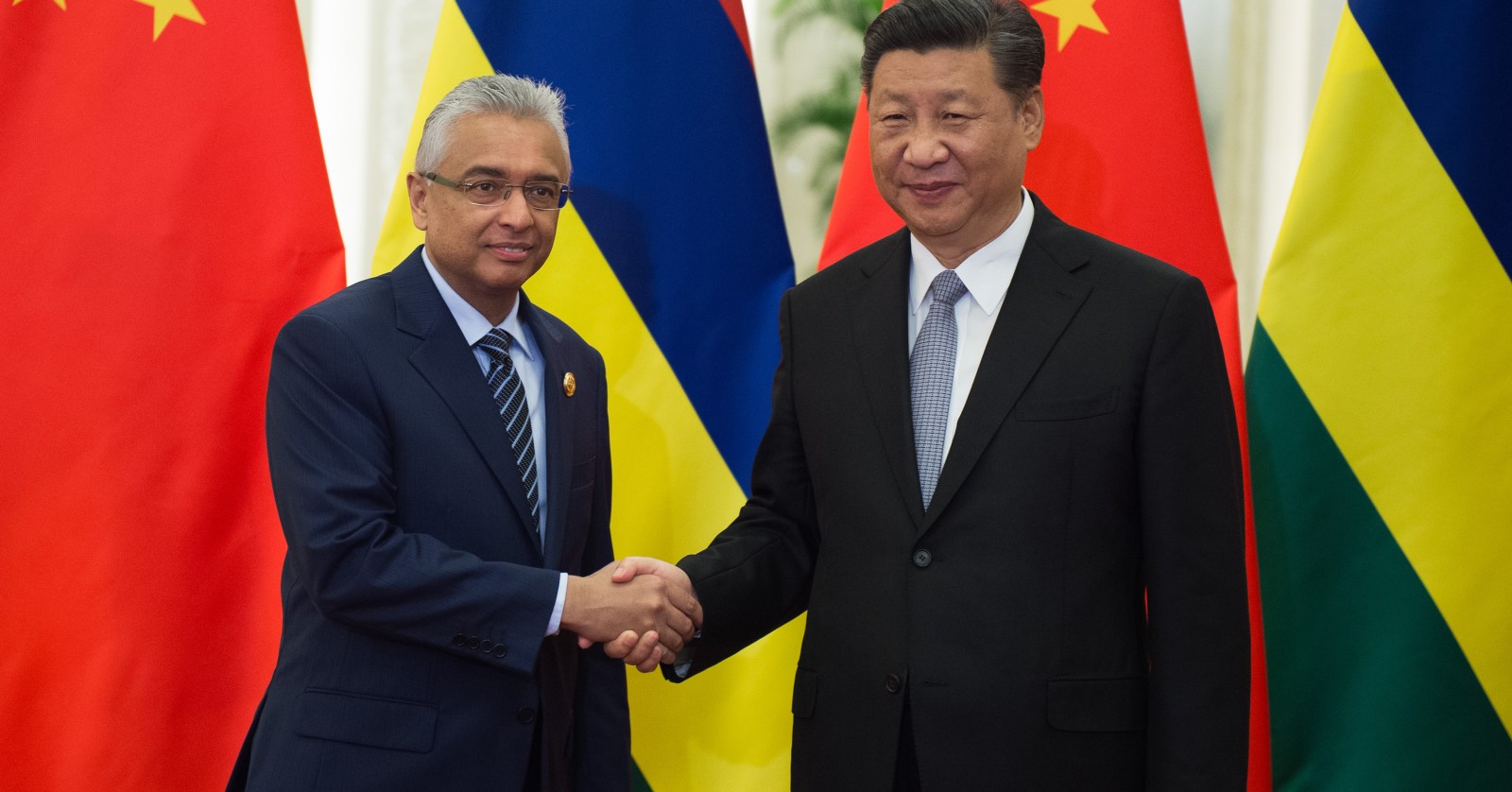 Mauritius Prime Minister Pravind Kumar Jugnauth (L) shake hands with China's President Xi Jinping (R) before their bilateral meeting at the Great Hall of the People in Beijing, China, 02 September 2018. Jugnauth is in China for the Forum on China-Africa Cooperation which will be held from 03 to 04 September in Beijing. EPA-EFE/NICOLAS ASFOURI / POOL

Must the island nations align with India or China, or can they straddle both to achieve maximum economic value? By Ronak Gopaldas for ISS TODAY.

Renowned for sunshine, tourism and beaches, the tiny island nations of Mauritius, Seychelles and Maldives are attracting the attention of foreign powers for vastly different reasons. In recent years, the Western Indian Ocean region has emerged as a new arena for strategic competition between India and China.

As the two Asian powerhouses increasingly assert themselves both economically and militarily in the region, the game of geopolitical chess has now spilt over from Asia into Africa, to the Indian Ocean coastline in particular.

The iconic headline Xi sells Seychelles by India’s seashore by Quartz earlier this year succinctly summed up these evolving power dynamics. It wittily encapsulated a wider discussion around whether India was losing dominance in the region. It referred to a case where approval for India to build a naval base on Assumption Island was reversed, ostensibly due to Chinese pressure. The decision was seen to reflect China’s encroachment into India’s traditional sphere of influence.

The episode raised wider questions around the motivations behind this competition, the manner in which it is unfolding, and the broader implications for the countries involved, the Southern African Development Community region and the wider continent. For the island nations, it highlights the difficult trade-offs involved in this proxy battle.

So why the sudden interest in the Indian Ocean? First, it is important to understand the region’s appeal. Although small in size, the island nations are a key priority due to their geographic location. Two-thirds of the world’s oil shipments, a third of bulk cargo and half of all container traffic traverse the Indian Ocean.

Studies have shown that the Indian Ocean region will probably become a leading source of new global growth over the next 20 years. Also, strategic access, leverage and influence for energy resources and national security are driving the security agenda for both countries, says Chad M Pillai of the Military Writers Guild.

Second, India and China’s approaches to the region have traditionally been vastly different. Now, a change in approach by China has placed the two powers at odds over the lucrative maritime expanse. Given its geographic proximity and historical and cultural linkages, India has traditionally been the pre-eminent power, especially in military and specifically naval activities. Further, India’s activities in Africa have generally been led by the private sector and are rooted in deep commercial and cultural ties.

China’s engagement in Africa has largely focused on resources and infrastructure and has assumed the form of government-to-government lending. Recently China has been criticised for predatory debt lending practices across Africa, and a perceived neo-colonial agenda, with the example of Sri Lanka’s Hambantota cited as a cautionary tale for nations attracted to Belt and Road Initiative benefits.

However, as evidenced by its establishment of its naval base in Djibouti, China’s strategy is evolving – both in nature and geographic scope. Efforts are under way to establish a presence in the Indian Ocean with its String of Pearls strategy – which, in addition to achieving economic and military penetration, also serves to contain India.

Third, having seen China make inroads into its backyard in countries like Nepal, Pakistan and Sri Lanka, India doesn’t want this to happen in another region where it has a comparative advantage. So it is redoubling its efforts to maintain ascendancy and dominance in the Indian Ocean littoral.

It is telling that both Xi Jinping and Narendra Modi have prioritised visits to the island nations in recent years. The launch of the Asia-Africa Growth Corridor (in partnership with Japan) in 2017, as an alternative to China’s Belt and Road Initiative, adds another intriguing dimension to this Sino-Indian rivalry. This high-stakes contest is generating anxiety, with the possibility of being outmanoeuvred in its own backyard too significant a risk for India to contemplate.

With such significant interest from both parties, policymakers have adopted contrasting approaches to managing their engagement with either country. Mauritius has avoided picking a side, instead looking to maintain cordial relations with both.

Indeed, as noted by Neeta Lal in Asia Sentinel, Mauritius “aims to maintain political and security links with India while letting China facilitate its plans to re-orient its role as a financial center towards Africa”. However, the author adds that “balancing relations with the two superpowers will need the skills of a juggler”.

While Mauritius argues that it hasn’t been asked to pick a side, Seychelles has made its neutrality more explicit. This “friend of all and enemy of none” stance has been taken as a diplomatic fillip for China, and an endorsement that its regional strategy is proving successful.

Although illustrating dynamics in Asia rather than Africa, the Maldives offers another interesting bellwether for the proxy battle, with the recent presidential election acting as a timely boost to India’s prospects.

After years of escalating Chinese influence, Abdulla Yameen’s government was defeated by opposition leader Ibrahim Mohamed Solih in the September elections. The new leadership intends to review all agreements that the Maldives signed with China under Yameen’s rule. It will probably also repair strained relations with India.

Is there space for both nations to co-exist? Will the island nations be forced to align with India or China, or can they straddle both sides to achieve maximum economic value? Neither of these BRICS peers will want to lose out on the spoils.

Policymakers will face challenges in squaring the lures of China’s cheap and easy money and infrastructure boon with India’s historical relationship, its political, military and commercial benefits and the more inclusive nature of its arrangements. In both scenarios, there are significant opportunities and risks to consider. Decisions will largely depend on each nation’s cost-benefit computations and where they see a longer-term benefit. Nimble policymakers will use crafty diplomacy, strategic prioritisation and savvy negotiation tactics to exploit this interest.

As Beijing and New Delhi continue to navigate these seas, both literally and metaphorically, there will be some tough choices and opportunity costs for these countries’ leaders to consider. Answering the question of who to align with and under what circumstances is far from straightforward. But having more options is certainly better than fewer.

For the nations in question, it is a case of “more money, more problems” – but these are good problems to have. DM